Only 7.1% of the UK has had coronavirus: Major antibody study reveals

How Covid affected England, Wales and Scotland: People in London were twice as likely to have had the disease as those North of the Border or the South West of England

Just 7 per cent of people in the UK have been infected with coronavirus, according to early results from the biggest study of its kind in Britain.

Researchers tested the blood of 20,000 Britons from up and down the country for antibodies of the disease, which signal if they have had Covid-19 and fought it off.

About one in 14 (7.1 per cent) participants tested positive for the virus-fighting proteins produced by the immune system in response to infection.

The findings reveal the country was miles away from achieving so-called ‘herd immunity’, a policy pondered by politicians at the very beginning of the crisis.

Boris Johnson is thought to have thrown his weight behind the controversial strategy in March, which would require letting 40 per cent of people get infected on purpose

Herd immunity happens when so many people in a population become immune to an infectious disease that it prevents it from spreading.

The study also suggests the virus kills around 1 per cent of the people it infects, which is far higher than seasonal flu, for example, which has a death rate of 0.1 per cent.

Covid-19’s true death rate of the virus has been a mystery for months due official numbers varying wildly between nations due to inconsistent testing methods.

Researchers also found a huge disparity in infection rates in different parts of the country, with people in London twice as likely to have had the disease as those in Scotland or the South West of England.

The study, by the UK Biobank, reinforced the theory that black, Asian and ethnic minority (BAME) people were disproportionately affected by the virus compared to whites.

Black people (11.3 per cent) were almost twice as likely as white people (6.9 per cent) to have been infected, while the disease infected around one in 10 with South Asian heritage (9 per cent).

The study, by the UK Biobank, reinforced the theory that black, Asian and ethnic minority (BAME) people were disproportionately more likely to catch the virus than whites 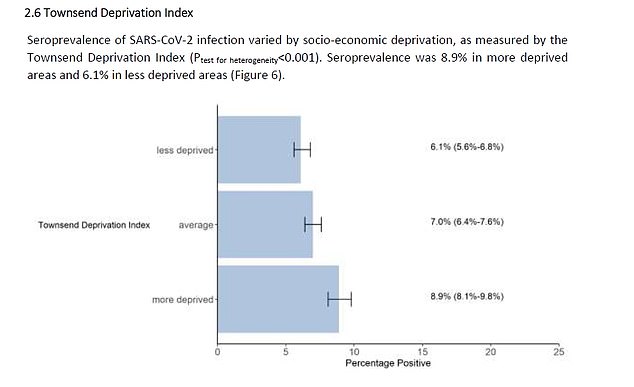 Participants living in the poorest parts of the country had a 45 per cent higher chance of contracting Covid compared to those in the wealthiest neighbourhoods. For people in deprived areas 8.9 per cent tested positive for antibodies compared to 6.1 per cent in wealthy regions 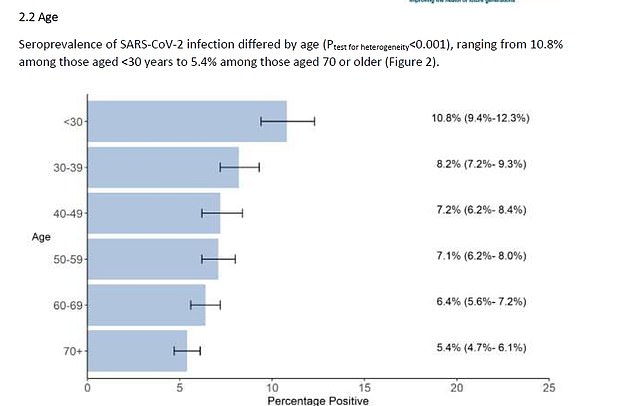 For those under 30, 10.8 per cent had previously been infected, compared to 5.4 per cent in those over 70. Young people are more likely to socialise in multiple groups and interact with strangers. Whereas the elderly, who are most at risk of Covid-19 complications, were told to shield during the height of the crisis to avoid contracting the disease

The UK Biobank study will monitor 20,000 Britons for six months. Participants will take an antibody test every four weeks, along with a survey about their symptoms.

The antibody test requires a finger-prick sample of blood using a kit sent to their homes. Antibodies to SARS-CoV-2, the disease that causes Covid-19, in these samples are being measured in a central laboratory at Oxford University.

Researchers then extrapolate the findings to the nationwide population to paint a clearer picture of how the virus has behaved in the UK.

The first results provide a snapshot of the epidemic in the UK during May and June, when the nation-wide lockdown brought the crisis under control. 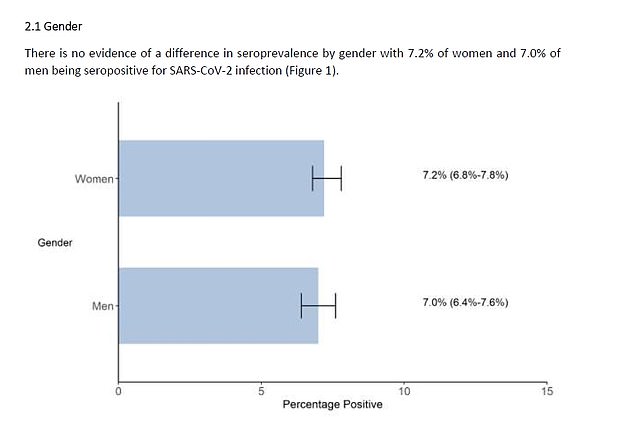 There was no difference in the rates of previous infection between men and women, the study found 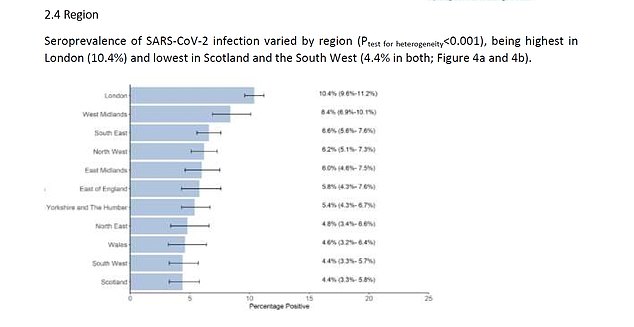 London was the worst-hit region, followed by the West Midland and South East of England

Data compiled by the statistical bodies of each of the home nations show 56,483 people died of either confirmed or suspected Covid-19 across the UK by the end of May.

They showed that there was no difference in the rates of previous infection between men and women, but the rates were higher in younger people.

Young people are more likely to socialise in multiple groups and interact with strangers.

Whereas the elderly, who are most at risk of Covid-19 complications, were told to be extra vigilant and shield from others during the height of the crisis to avoid contracting the disease.

Previous infection was most common among participants who live in London (10.4 per cent), which was the former epicentre of the UK’s epidemic.

Infections wer least common among those who live in the South West of England and Scotland (4.4 per cent in both).

Participants living in the poorest parts of the country had a 45 per cent higher chance of contracting Covid compared to those in the wealthiest neighbourhoods.

For people in deprived areas, 8.9 per cent tested positive for antibodies compared to 6.1 per cent in affluent regions.

Reasons for this are not totally clear but scientists suggest poorer general health, living in overcrowded households and relying on public transport – which puts them at greater risk of getting infected – are what increase people’s death risk.

The most deprived areas in the country are also home to high proportions of people from BAME backgrounds, who have been disproportionately affected by the illness.

The study found the rate of infections among black (11.3 per cent) and South Asian (9 per cent) ethnicity was far higher than white people (6.9 per cent).

The findings suggest the coronavirus’ death rate is about 1 per cent, although this could be an underestimate.

There have so far been 51,000 deaths from the virus in England and Wales, according to Office for National Statistics estimates.

But when Scotland and Northern Ireland’s deaths are included it takes the total to around 56,000.

Official Government figures put the death toll at around 46,000, far less than the ONS because they only include people who have tested positive for the disease.

When the 7.1 per cent infection rate is applied to the UK’s population of 66.65million, it suggests around 4.73million people have had the virus.

The mortality rate is therefore around 1 per cent – far higher than the seasonal flu, which kills 0.1 per cent of its victims.

The true fatality rate of Covid-19 has been a mystery because a lack of testing worldwide means scientists have no idea how many people have tested positive.

Despite the UK Biobank study providing the most in-depth look at how the virus has spread through the country, there are question marks about how reliable antibody testing is, with some studies suggesting immunity can diminish very quickly.

This would mean some people who tested negative in the study may have actually been infected, which skews the results downwards.

Professor Naomi Allen, UK Biobank chief scientist, said: ‘These initial results show that the rates of past infection with the coronavirus vary substantially within the UK population.

‘It is not yet possible to explain why these differences exist and how they are interrelated. More detailed analyses of the characteristics of different individuals are ongoing to help understand the causes of the varying rates of infection.’

‘Understanding the rates of infection and the persistence of antibody levels will be helpful for managing the ongoing process of coming out of lockdown safely, as well as supporting the development of vaccines against SARS-CoV-2.’