Only eight per cent of Americans under 30 have significant trust in law enforcement while 81 per cent of Baby Boomers think ‘violent protest is never justified’ – despite their role in the Civil Rights Movement.

There is a vast, generational gap between Americans when it comes to their views on trusting law enforcement, the prevalence of racism and Black Lives Matter protests, according to a new Yahoo News/YouGov poll.

One of the most pronounced divides between younger and older Americans is their trust in police officers, as well as how they’ve handled recent protests.

Just eight per cent of Americans between the ages of 18-29 had ‘a great deal’ of trust in law enforcement, with the majority reporting ‘some’ trust at 36 per cent.

According to a new poll by Yahoo News and YouGov, just eight per cent of young Americans between 18 to 29-years-old have ‘a great deal’ of trust in police officers 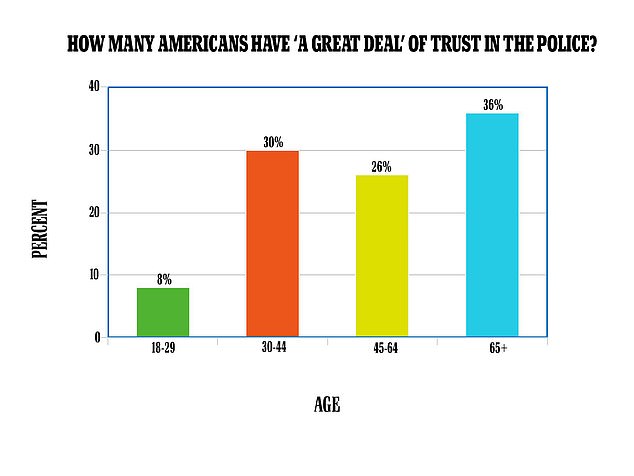 On the other hand, 36 per cent of older adults 65 years old or older said they placed great trust in police officers.

Overall, 56 percent of the 18-29 group reported having little to no trust in police compared to the 21 percent sharing the same sentiments from the 65 and older group.

On Memorial Day, an African-American man named George Floyd, 46, died while in police custody after a white officer knelt on his neck for nearly nine minutes in Minneapolis, Minnesota.

In several instances, authorities have clashed with civilians practicing peaceful protests. But in others, violence, looting and arson have broken out. 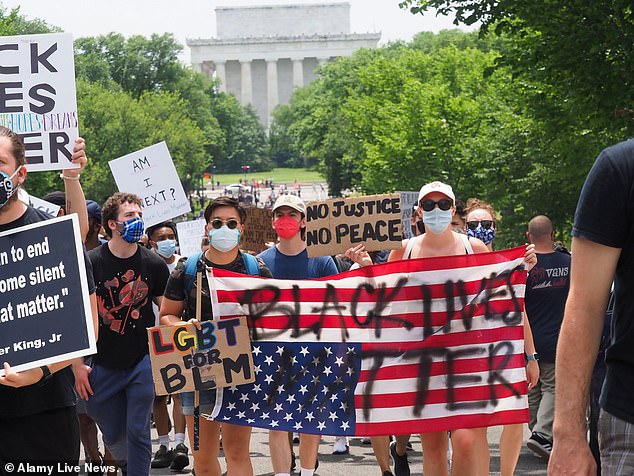 The death of George Floyd, an African-American man who died in police custody, has spawned a new wave of Black Lives Matter protests that have erupted across the United States 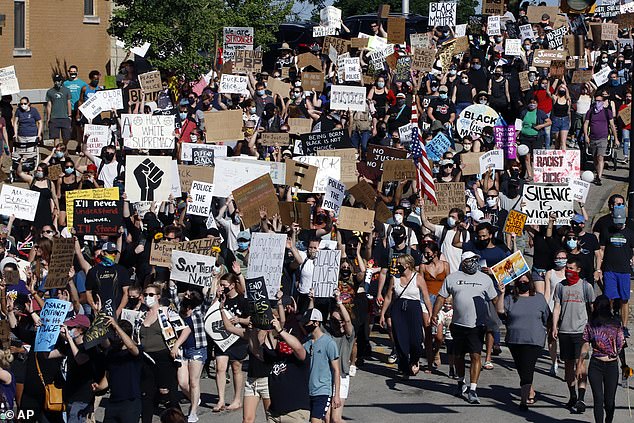 According to the poll, 65 per cent of the younger group did not approve of how police officers responded to protests, which has been criticized as heavy-handed and excessive

Sixty-five per cent of the younger group did not approve of how police officers responded to protests, in contrast with the 39 per cent disapproval from older adults.

A slim majority – 52 per cent – of that same cohort said that police officers have been even more violent with protesters over the last few weeks.

Among the older generation, 52 per cent believe that protesters have been more violent. 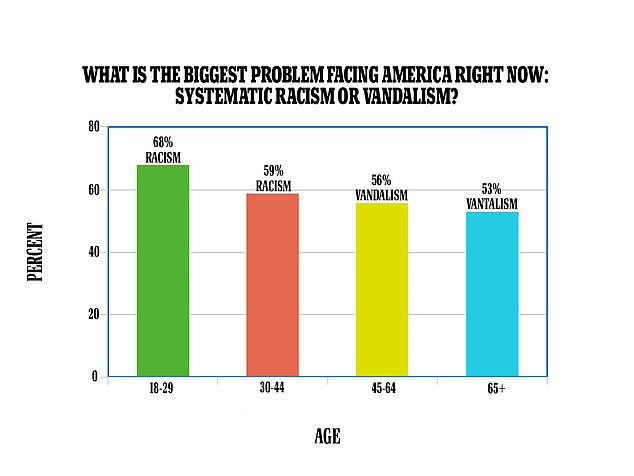 Videos of clashes between civilians and law enforcement have overtaken social media in the last several weeks.

In New York City, one alleged incident of police violence included  a 20-year-old woman who was roughly shoved by an NYPD officer to the ground during a protest.

The officer had allegedly called her a ‘stupid f***ing b***h’ before pushing her.

The victim, Dounya Zayer later shared updates from the hospital saying she suffered a seizure and a concussion from the attack.

An investigation has since been launched and the officer was charged with assault.

The following day, a second officer was caught on video yanking down a man’s coronavirus mask to pepper spray him. 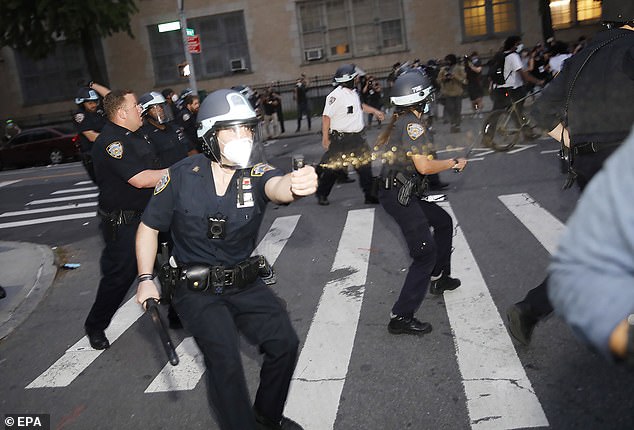 The man had been among a massive crowd of demonstrators in Brooklyn and had been holding his hands up.

Footage showing NYPD cruisers intentionally edging towards protesters in the street and clips shared to social media have furthered eroded the public’s trust in authorities.

The most recent incident happened in the Bronx last week after 16-year-old Jahmel Leach was allegedly tased three times and beaten by an officer during a protest.

Conversely, reports of an Oklahoma woman allegedly throwing a Molotov cocktail into a NYPD police cruiser filled with four officer have also made headlines.

Footage obtained exclusively by DailyMail.com shows a woman preparing the explosive before throwing it at the van.

In Minneapolis, a police precinct was torched by protesters during the first week of demonstrations. 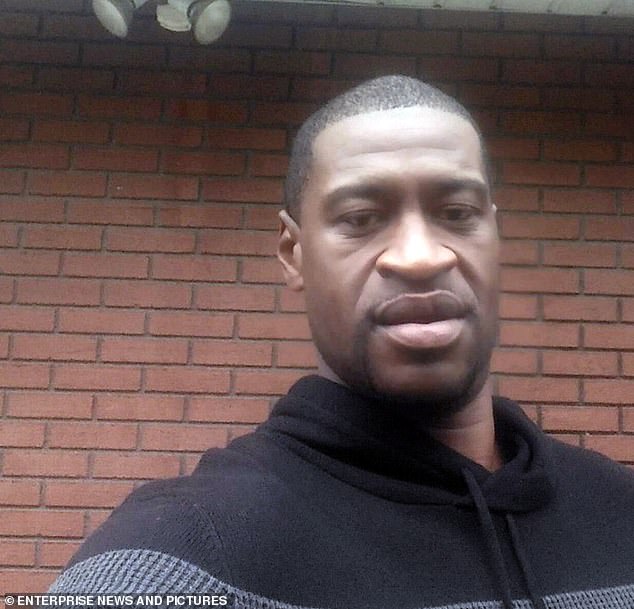 George Floyd, 46, (pictured) died on Memorial Day in Minneapolis, Minnesota, after a white police officer knelt on his neck for nearly nine minutes

A small percentage of younger respondents said police departments do not need to be reformed versus 28 per cent in older adults.

Calls to defund, disband, and in some cases dismantle, police departments have grown amid ongoing demonstrations.

Cities like Los Angeles and New York City have already vowed to cut part of their local departments’ billion-dollar budgets to divert the money to initiatives to aid minorities.

Baby Boomers were more likely to dismiss violent protests overall, with 81 per cent agreeing with the phrase ‘Violent protest is never justified in the U.S. as a way for a group to accomplish its goals.’

Just 48 per cent of the younger group ‘strongly agreed’ or ‘somewhat agreed.’

Baby Boomers’ apparent aversion to violent protests come at odds with their reputation for social justice, but not necessarily with methods used in their youth.

The Civil Rights Movement began in 1954 after generations of African-Americans struggled to gain racial justice and equal rights.

Although slavery was officially abolished from the US in December 1865, a new series of laws referred to as ‘Jim Crow’ continued to pigeonhole African-Americans in positions of inequality throughout the South.

Allowing all white motorists to have the right-of-way at intersections, bans on African-Americans showing public displays of affection and forcing African-Americans to use separate amenities, like drinking fountains and entryways, were some of the racist laws enforced during that time period. 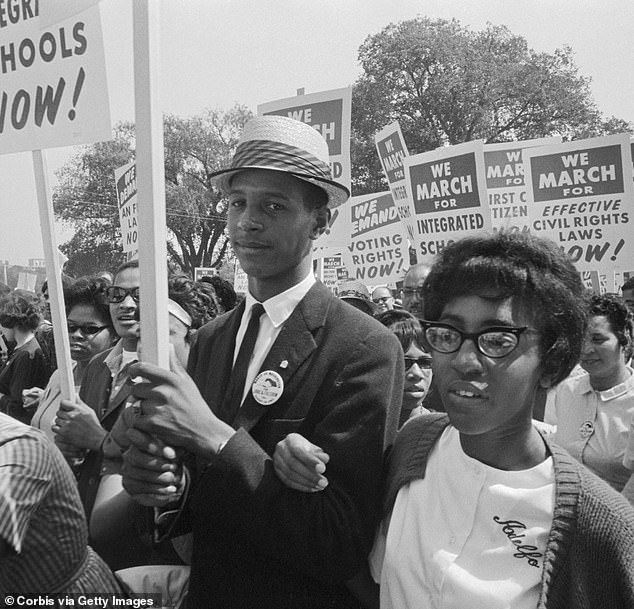 In response, African-Americans rose up under the guidance of Civil Rights Movement leaders like Dr. Martin Luther King Jr. and began pushing back against Jim Crow.

Much of the protests held were peaceful in nature, but were often met with violence by white residents and law enforcement.

Protesters held peaceful sit-ins, bus boycotts and marches, among other forms of demonstrations, to combat racism.

One of the most famous Civil Rights-era marches was the March on Washington for Jobs and Freedom in August 1963, which saw thousands gather on the 100th anniversary of President Abraham Lincoln’s Emancipation Proclamation.

Dr. Martin Luther King Jr. gave his legendary ‘I Have a Dream’ speech from the Lincoln Memorial. 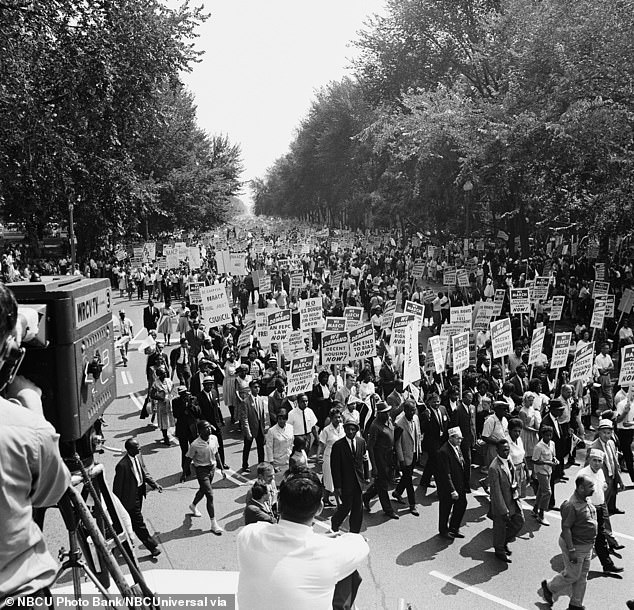 The Civil Rights Movement, with leaders like Dr. Martin Luther King Jr., were characterized by a series of peaceful protests like sit-ins and marches 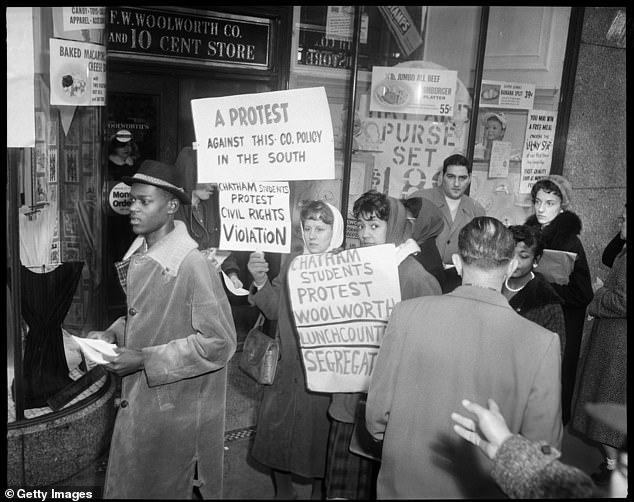 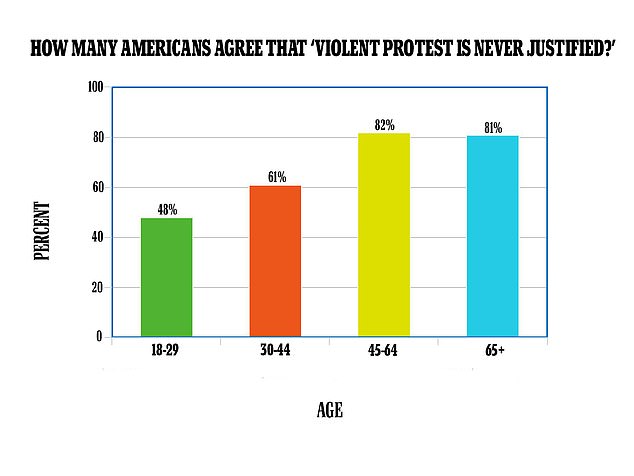 Younger and older adults in the Yahoo News/YouGov poll were also steeply divided on what is currently a bigger issue: systematic racism in policing or vandalism.

Sixty-eight per cent of the younger crowd insisted that systematic racism was a more troubling issue, but 53 per cent of older adults believed vandalism and violence were much worse.

The majority in both groups either ‘strongly agree’ or ‘somewhat agree’ with the phrase ‘Racism is built into American society. The assumption of white superiority pervades schools, business, housing, and government.’

But a large 72 per cent of young Americans believed the sentiment, while 55 per cent of the older generation agreed.

President Trump came under fire last week after the authorities, under direction from Attorney General William Barr, allegedly cleared away peaceful protesters from the White Hose with rubber bullets and tear gas.

Trump was later seen walking through the then-cleared Lafayette Park to St. John’s church for an apparent photo-op. 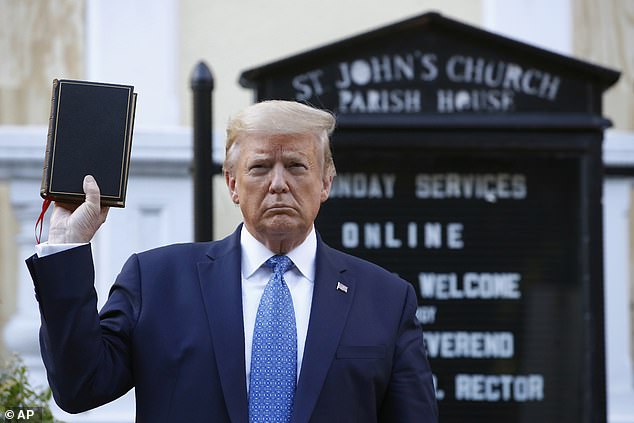 Despite 40 per cent of older Americans it’s appropriate to forcibly remove peaceful protesters, President Trump (pictured) was criticized after authorities allegedly cleared away peaceful protesters outside the White House with tear gas and rubber bullets 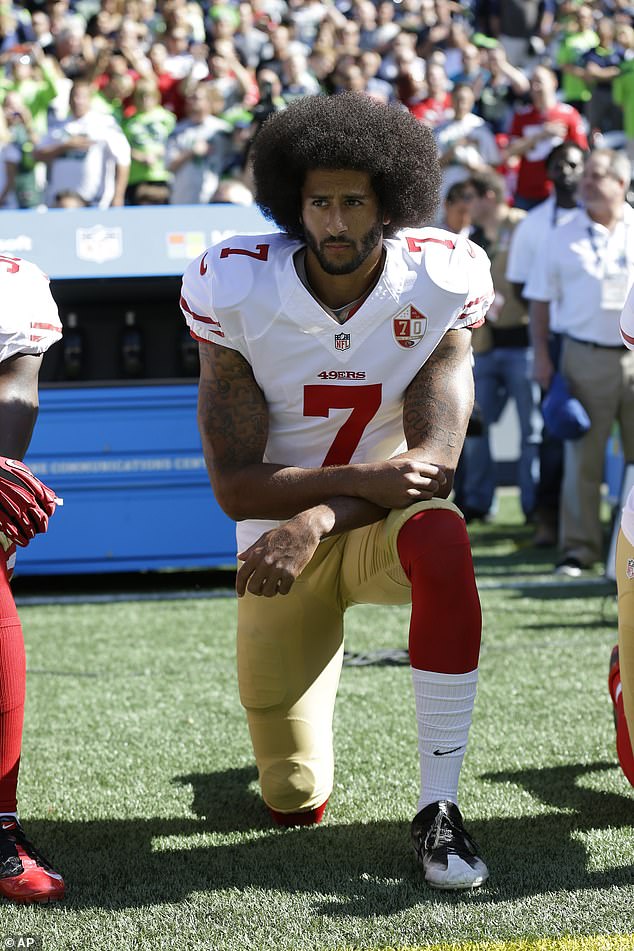 Nearly 60 per cent of young people said the recent protests were motivated by a sincere desire to hold law enforcement accountable.

But just over 50 per cent of older adults linked the protests to a long-held bias against police officers.

When asked the phrase ‘Are You Racist?’, seven per cent of both the 18-29 group and the 30-44 group agreed. Just one per cent of surveyors over 65 answered the same.

Finally, support for NFL free agent Colin Kaepernick and his stance against police injustice has grown.

The older generations’ percentages did not peak over 40 per cent, with 57 per cent of surveyors over 65 opposing.

Kaepernick, 32, launched a movement against police brutality in 2016 by taking a knee during the National Anthem at NFL games.

The action of taking a knee quickly became symbolic of the Black Lives Matter protests and was used throughout demonstrations.