Until a global pandemic brought about lockdown, Rose Jones’ artistic endeavours were largely focused on her fine art degree at Oxford Brookes University.

But with her academic journey on hold, lately, upstairs in the family home, in a picturesque corner of Hampshire, Rose’s creative enterprises have taken a rather different, eyebrow-raising turn.

Yes, Rose is deploying her photographic skills, but in most other respects her daily activities are of a nature that many parents with children of a similar age (she is 20) would find simply horrifying.

For large portions of her day, Rose is engaged in what some observers might call a form of ‘virtual prostitution’— a criticism she fiercely refutes. This well-spoken, intelligent, charming student takes photos of herself, in various stages of undress (in the afternoon, with the sun beaming through her bedroom window is her favourite time) before posting the material online, behind a paywall.

She responds to ‘special’ requests from her fans, and promotes herself furiously across as many social media platforms as possible (she has more than 2,800 followers on Instagram).

Rose Jones, 20, (pictured) takes photos of herself, in various stages of undress before posting the material online, behind a paywall

As for her family downstairs, they are absolutely fine about their daughter’s little sideline, which has earned her more than £8,000 over the past three months.

Her marketplace? A website called OnlyFans, a realm that you may not have heard of, but one that is rapidly mushrooming into a digital phenomenon, albeit with a dark side.

OnlyFans was launched four years ago, the brainchild of banker’s son Timothy Stokely, in his own words a ‘British entrepreneur in the adult entertainment industry’.

In essence it is a social media platform, but forget dogs doing silly tricks and moody galleries of filtered photographs of sunsets and the like, here the content is racier. 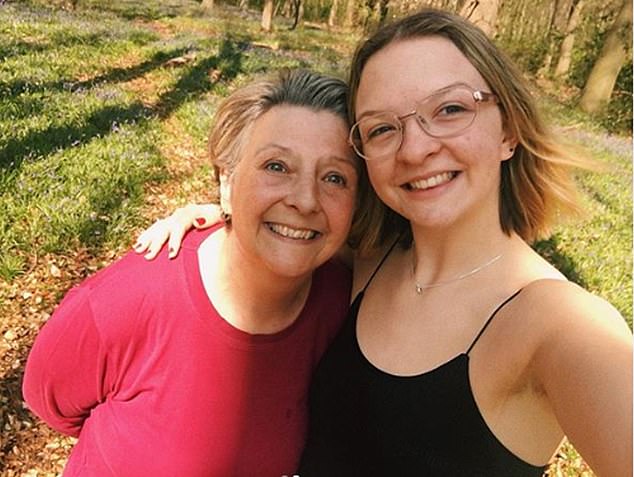 Incredibly, this new endeavour has unfolded under the very same roof where Rosie recently said her last goodbye to her mother (pictured), who died of cancer three weeks ago

The platform’s slick PR team insists it was set up for all creators, ‘from fitness, dancing, DJs to music’, on the premise that if fans of influencers were really fans, they’d pay a subscription fee to see the best of the best in terms of the content their idols produced.

‘The adult content evolved through no encouragement of their own,’ insists a spokeswoman.

But make no mistake, many of these ‘creators’ are young women like Rose, often with no history of adult work, but with an attitude to sex and their own bodies that is deeply disturbing.

When you consider that ‘subs’ will pay between £3.90 and £39 (though in fact the sky’s limit) to follow a creator for a month — which in Rose’s case might be three new pieces of ‘content’ a day — and more for personalised material, it’s easy to see why a young woman, particularly someone with a mountain of student loans to pay off, loads of social media followers and particular physical assets, might consider OnlyFans a source of easy cash.

Rose joined OnlyFans in April, but is rapidly making more money than she could ever dream of working behind the bar at the Student Union, or waiting tables. 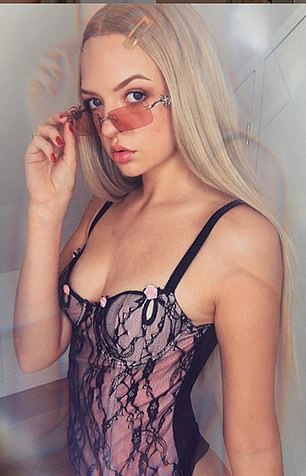 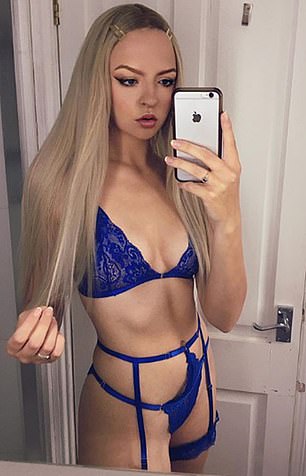 Rose joined OnlyFans in April, but is rapidly making more money than she could ever dream of working behind the bar at the Student Union, or waiting tables

‘Recently I did a three-minute video rubbing oil into my body,’ she says, by way of example. ‘People would much rather have cheaper material more often than more expensive material less often.’

OnlyFans (such is its popularity it was name-checked in a recent Beyonce collaboration) handily tells its creators how much money they are making and enables them to work out where they sit in the unofficial league table of global creators.Rose is in the top three per cent.

To give some context, OnlyFans has a massive 50 million users (former Atomic Kitten Kerry Katona and model Danielle Lloyd among them) and 600,000 content creators, up from around 450,000 at the start of lockdown, because make no mistake, if Covid-19 has crippled the High Street, it has reaped dividends for online platforms like this one.

According to the magazine Vice, it reported more than a 75 per cent increase in new sign-ups for the month of April and gained around 150,000 new users every 24 hours.

Users, like Rose and the other women the Mail has spoken to say the platform is ‘empowering’, that far from being exploited, they are firmly in control both of their bodies and their finances.

Yet, as many young women can attest, it’s all too easy for graphic content to fall into the wrong hands, and be shared widely. It’s also notoriously difficult to get rid of once ‘out there’ and creators may discover that making easy money has consequences they can never shake off.

‘It’s estimated around 3 million photos or 750 hours of HD video, were leaked from the site earlier this year. 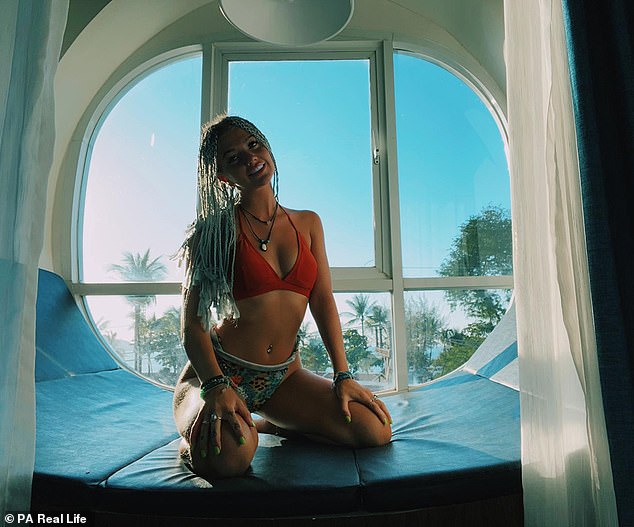 Then there is Kaya Corbridge (pictured), who speaks to the Mail from Portugal, where she is enjoying an extended holiday with friends from OnlyFans, a holiday in which she is still posting content. She is on course to earn £70,000 this month.

Teela Sanders, a professor of criminology at the University of Leicester, says: ‘Whilst our research shows that the internet makes sexual services safer, there are hidden risks in relation to setting up profiles and being outed with challenges of deleting the digital footprint for the future.’

Anyone using the site must be at least 18, but age restrictions and the requirement to provide identification are notoriously easy to circumvent.

Rose’s journey into this world is relatively new, but already she has done the maths and calculated ‘if it carries on like this I would be on £33,000-a-year’.

Incredibly, this new endeavour has unfolded under the very same roof where this young woman recently said her last goodbye to her mother, who died of cancer three weeks ago.

She insists her mother, an artist, and father, a builder, not only knew about her new employment from the outset, but supported it. ‘I would not have done it if I didn’t have support from my family. My mum was cautious, she was just worried about things being leaked, but at the same time understood it’s my body and my life.

‘I don’t tell them about the general day to day of it, but do if I have any crazy requests so we can laugh about it.’

Rose, who was inspired after listening to a podcast and learning that some ‘influencers’ she followed were on Only Fans, says she had intended to get a summer job to help pay for a second semester in Canada.

‘But then lockdown happened and I couldn’t go and get a job in retail as it was too risky [living with my mum]. I wasn’t expecting to do so well.’

Like many of her peers, Rose was already accustomed to the modern selfie-trend, but also dabbled in taking videos of herself ‘just for me’, but insists that was the limit of her experience in the arena. Prior to the death of her mother (she took two days off), she was working from 9am until 1am, creating and building her OnlyFans account.

She says: ‘Shoots take up a lot of time, I like to take pictures when the sunlight is good, so I have to take loads of content to keep me going for when it’s not so good. I’m trying to start editing in bulk so I can create a queue. I try to post three times a day, mostly just pictures, there will be a couple of videos, perhaps showing off my assets.

‘I did set a limit originally about what I would do, but I have got more comfortable with it, I’m still taking it slowly, there is no boy/ girl content, but I would like to do that in the future.’ Full nudity? Yes. Intimate acts? Yes. It’s bewildering, as is Rose’s attitude to money. She admits she would ‘feel bad’ charging the £130 she knows a fellow creator charged for a nude shoot. She fiercely defends any suggestion that what she does might be like prostitution. ‘I’ve had such a positive experience, I don’t see how it can be prostitution at all, it has so many negative connotations, it’s completely different to that.

Forget the seedier requests and the fact that users of this site are faceless men, whose intentions and actions are hidden behind a computer screen, and Rose almost makes it sound attractive, as it doubtless does to impressionable young women dazzled by the likes of British glamour model Dannii Harwood, who reportedly became the first Brit to make £1 million from the site.

Then there is Kaya Corbridge, who speaks to the Mail from Portugal, where she is enjoying an extended holiday with friends from OnlyFans, a holiday in which she is still posting content. She is on course to earn £70,000 this month.

Kaya, 23, was four weeks into an international relations and global development degree at Leeds Beckett University, in September 2017, when she discovered OnlyFans.

By the end of the first year, she had quit to focus on her account, when she worked out she was earning more than her tutors.

‘I’d never sent a nude picture in my life when I started,’ says Kaya, who says her content is less salacious than others. Some are just odd: like one who asked her to put a slice of bread in her shoe, walk around on it all day, and send him the crumbs. 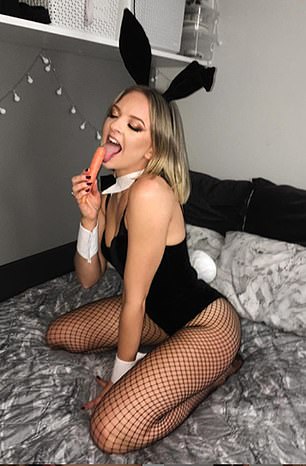 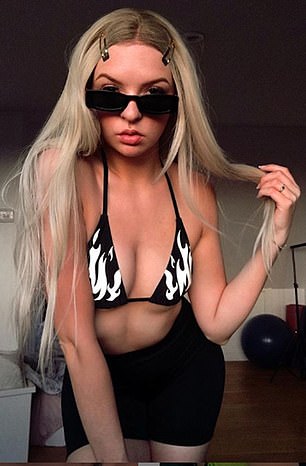 Users, like Rose (pictured) and the other women the Mail has spoken to say the platform is ‘empowering’, that far from being exploited, they are firmly in control both of their bodies and their finances

Others will pay £1,000 for the privilege of ‘owning; Kaya for the day, dictating what she wears, what she eats, what she does.

When asked about any negativity she has experienced? She remarks, quite matter-of-fact, that she has had death threats after speaking about her success — it’s why she keeps a rape alarm in every room when she’s at home and sleeps with a bat behind her bed.

And yet, like her peers, Kaya, who has set up a charity for sex workers, still insists she is the one in charge — although you have to wonder for how long . . . and at what cost to her future.

There is, of course, someone else who benefits from all of this, someone who probably isn’t bothered by the fact that the more creators joining the site to offer content like Rose and Kaya, the more saturated the market gets with ‘camgirls’ and the more it drives down prices (as the Mail has seen described in forums populated by anonymous creators).

He is Timothy Stokely, who last summer paid £2.4 million for his Bishop’s Stortford home, complete with cinema, bar, gym and sauna.

The 37-year-old started soft-core cam sites after studying property and surveying at Anglia Ruskin University in Cambridge. There was Glam Worship, domination site, then Customs4U which he launched with his father, Guy, a former Barclays investment banker, in 2013. Customs4U, which the Stokelys sold in 2019, allowed users to request made-to-order content direct from performers.

His brother Thomas (an investment banker) joined the company in 2018, making it a thoroughly family affair.

Earlier this month, for the first time since it began operating in 2016, the service started charging VAT on fans’ monthly subscriptions following discussions with Her Majesty’s Revenue and Customs and Sky News reported HMRC was reviewing whether the company should have been collecting VAT since its inception.

Back in Portugal and Hampshire, Rose and Kaya are back to ‘work’. In this particular business, demand never ends.