Property prices are up 4.5 per cent annually according to the latest monthly index from the Office for National Statistics.

The area of the country which has seen the largest annual growth in the year is Swale, north Kent, where prices are up 15.5 per cent to stand at £255,000.

Steady growth: Official figures show that house prices are up 4.5% annually and sit at £224k

The area, which encompasses Faversham, Isle of Sheppey and Sittingbourne, is likely to be a hotbed for city commuters looking for value and space outside of the capital.

Other areas which have performed well include West Somerset and Oadby and Wigston, where values are up 13.4 per cent and 13.2 per cent respectively.

On the flipside, homes in Hartlepool are down 6.1 per cent in value to stand at £99,000 according to the ONS.

Prices in Brent and Southwark are also down on the year by 5.1 per cent and 3.6 per cent respectively. 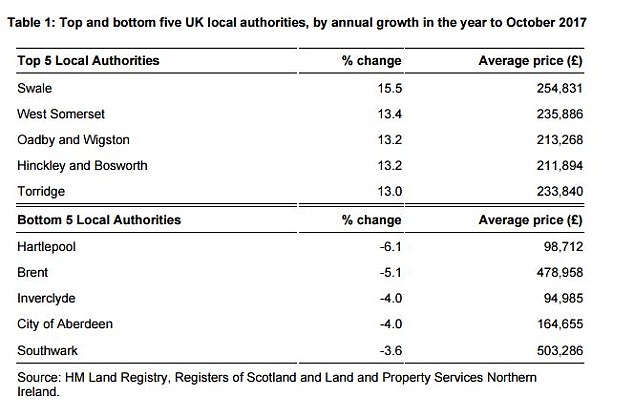 Huge differences: Prices in Swale are up 15.5% in a year while in Hartlepool, they are down 6.1%

The figures, which lag a month behind other indices from Halifax and Nationwide Building Society, show that the annual rate of house price growth has slowed from 4.8 per cent recorded in September.

The ONS says the yearly growth rate has slowed since mid-2016 but has remained broadly around five per cent during 2017. 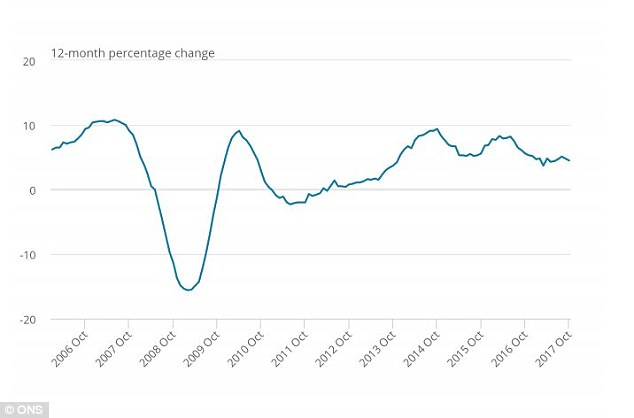 Annual growth: It has been around 5% since mid-2016, according to the ONS

Latest figures from property website Rightmove earlier in the week show that asking prices for houses have fallen by £8,000.

But the average asking price in the month to mid-December was £302,865, far higher than the official number given by the ONS.

The main contribution to the increase in house prices in the ONS report comes from England, where values increased 4.7 per cent over the year to October 2017, to stand at £241,000.

In Northern Ireland, a quarterly rise of six per cent means a typical home there now costs £132,000. 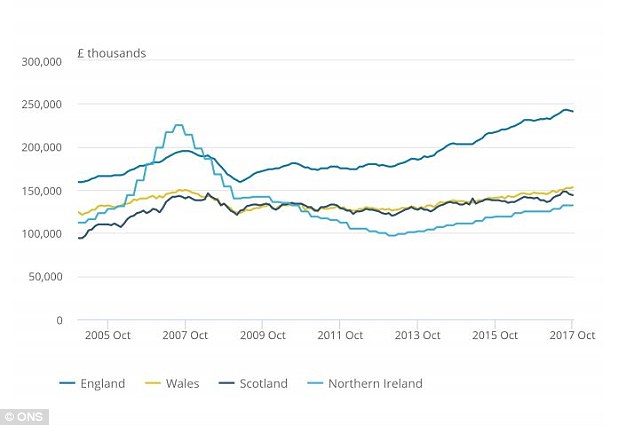 Huge gap: Prices in England continue to grow at a faster pace than in Wales, Scotland and Northern Ireland

Mark Harris, chief executive of mortgage broker SPF Private Clients, says: ‘House price growth continued to slow in October, according to this rather historic data, but as we near the end of 2017 it is clear that it has turned out to be a stronger-than-expected year for the housing market.

‘Despite the uncertainty created by the Brexit negotiations, many people have got on with buying and selling property regardless.

‘Borrowers have also been able to benefit from some of the cheapest fixed-rate mortgages ever seen, and as we move into 2018, we expect to see more of the same, even though inflation has risen to 3.1 per cent.

‘Much will depend on how the Brexit negotiations proceed – if we make decent progress then the next interest rate movement is likely to be upwards but not until 2019.

‘If, however, we walk away from a deal for whatever reason then a reduction in interest rates may even be a possibility, particularly if the UK slips back into a mild recession. Either way, interest rates are not likely to go very far anytime soon.’ 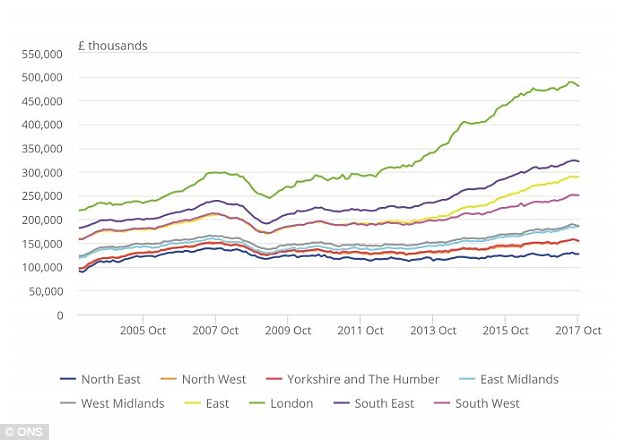 Capital: London saw the slowest house price gains of any area in the year

On a regional basis, London continued to be the region with the highest average house price at £481,000, but is seeing slower growth than all other areas, with values up 2.1 per cent.

The lowest average price continued to be in the North East at £127,000.

The East Midlands showed the highest annual growth, with prices increasing by seven per cent in the year to October 2017.

This is followed by the South West at 6.7 per cent and the East of England at 6.1 per cent.

The most expensive borough to live in continues to be Kensington and Chelsea, where the cost of an average house is £1.2million.

In contrast, the cheapest area to purchase a property was Burnley, where an average house costs £76,000.