Opposition leaders launch their plot to stop a No Deal Brexit

Opposition leaders gathered in Parliament today to plot how to tie Boris Johnson’s hands over Brexit.

Jeremy Corbyn joined Remainers Jo Swinson and Ian Blackford as well as the leaders of minor parties to discuss how they can ensure the Prime Minister obeys the law and seeks another Brexit delay.

Under the so-called Benn Act passed at the start of the month Mr Johnson will have to go to Brussels on October 19 and beg for a three-month Article 50 extension if he has not agreed an exit deal with the EU by then.

But with the PM insisting Brexit will still happen on Halloween, with or without a deal, Remainers fear he is preparing to break the law.

Some are worried that the current legislation to force his hand might may not be strong enough and want to make it ‘bulletproof’.

A Lib Dem source said this afternoon’s meeting was ‘positive’, while Labour said another meeting would take place on Monday, during the Conservative Party Conference.

In an interview, the Labour leader said: ‘It’s not a matter of choice for him, it’s an Act of Parliament that was passed. Last night he seemed unable to give that undertaking.

‘We will be taking parliamentary action on this again next week to ensure that the Prime Minister does not crash us out of the EU on October 31 without a deal.’

The action would be to make demands on the PM to request the extension, but further discussions are to be held with the cross-party group on the specifics of the motions, he said.

Pressed on whether he would whip MPs to vote for an election the moment an extension is agreed, he said: ‘Absolutely.’

Jo Swinson, the Lib Dem leader, said yesterday that she wants to toughen up an anti-No Deal law to force the PM to seek a Brexit delay as soon as next week 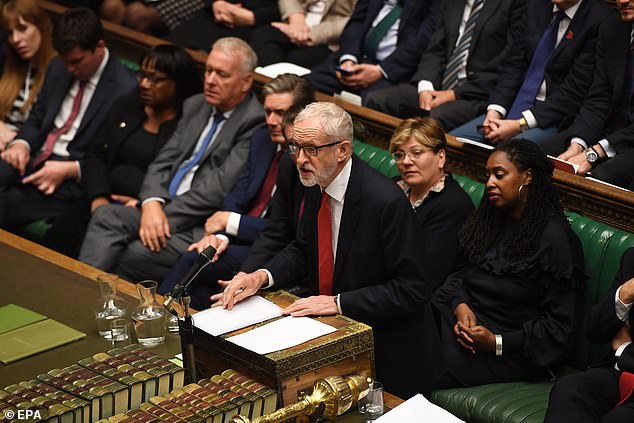 Jeremy Corbyn pledged further parliamentary action to ensure Prime Minister Boris Johnson asks for an extension, saying: ‘It’s not a matter of choice for him’

The Lib Dems want to bring forward new rebel legislation which would force the PM to ask for a delay long before the middle of October – perhaps as early as next week.

But 21 ex-Tory MPs who were stripped of the party whip after backing the bid to block No Deal are said to be against tampering with the existing law.

Instead they want to use the time between now and the October 19 deadline to hold the Prime Minister’s feet to the fire in different ways.

Brexit Minister James Duddridge told the Commons this morning that the government would abide by what is on the statute book but insisted Mr Johnson remains committed to taking the UK out of the bloc on October 31.

‘We will obey the law, but who knows what will happen between now and then in the negotiations,’ Mr Duddridge said. 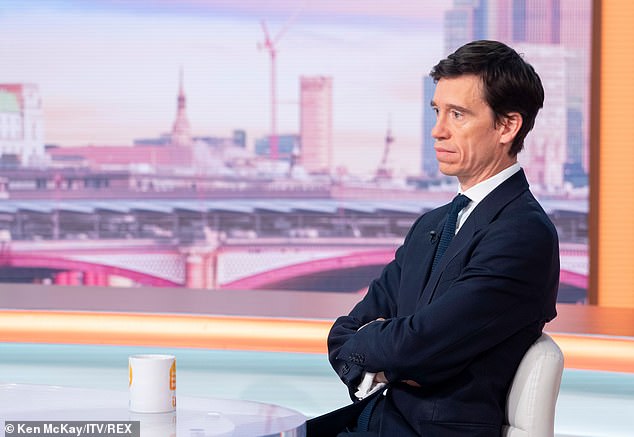 But 21 ex-Tory MPs like Rory Stewart (above, on GMB yesterday) are believed to be opposed to tampering with the legislation

Lib Dem leader Jo Swinson yesterday said that the UK could not wait until October 19, when the Benn Act – named after creator Labour MP Hilary Benn –  says the PM must have asked the EU for a three-month extension if a No Deal split looks likely.

She said that there were fears that legal efforts to compel the PM to act might take longer than the period between the October 19 deadline and the Brexit departure date on Halloween.

Addressing the media outside Parliament yesterday, Ms Swinson argued that a 12-day buffer was not enough to safeguard against No Deal.

‘That is why we have to bring forward the ways in which we can make sure the No Deal threat is removed.’

But Ms Swinson’s plan appears doomed to fail after Labour responded coolly to the idea of changing the Benn Act.

‘A lot of thought went into picking the date and it is not yet clear what problem the Libs are trying to fix,’ a Labour source told The Telegraph.

However, there is growing dismay among some Remain-backing Labour MPs over Jeremy Corbyn’s Brexit leadership. 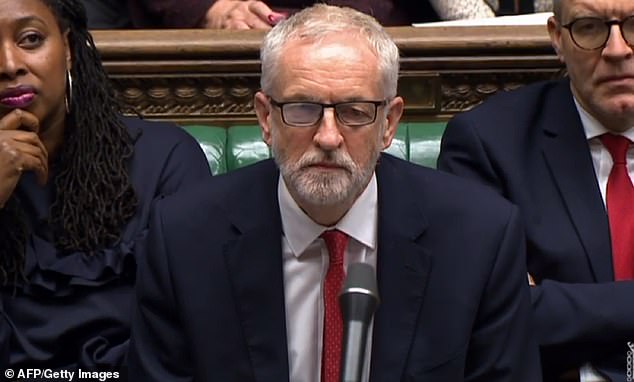 Jeremy Corbyn, pictured in the House of Commons last night, is believed to be against the idea of changing the so-called Benn Act

Meanwhile, the 21 Tory MPs who were stripped of the whip are also believed to be opposed to Ms Swinson’s proposals.

They reportedly favour leaving the anti-No Deal law as it is and concentrating instead on ramping up the scrutiny of the PM’s Brexit plans.

It is thought the 21 former Tories want to use parliamentary procedures and arcane devices to force the government to publish more details of its No Deal contingency planning and to keep the pressure on the PM with urgent questions and debates.

Such methods have proved productive for rebel MPs in the past as they have previously forced the government to hand over Brexit economic impact assessments and No Deal documents.