Oprah Winfrey has said that she wants Walt Disney Company CEO Bob Iger to be president of the United States.

Winfrey made the remarks in an interview with Iger set to air on Sunday on her OWN Network, as Iger promotes his his new memoir, The Ride of a Lifetime.

‘If Bob Iger had decided to run for president, I would be canvassing in Iowa right now,’ said Winfrey, who has been friends with her fellow media mogul Iger for decades.

‘More than ever, every day, I wish you had done it,’ said Winfrey, who has been previously rumored for a presidential run herself.

Iger admitted last year that he had explored a presidential run in 2020, but that the plan had been scuttled when his tenure at Disney was unexpectedly prolonged.

Following Disney’s $71.3 billion purchase of the film and TV assets held by 21st Century Fox, the board asked Iger to remain at the helm of the company until late 2021.

Iger told Vogue he ‘believed that there was a need for someone in high elected office to be more open-minded.’

‘The thought I had was coming from the patriot in me, growing up at a time when we respected our politicians not only for what they stood for but because of what they accomplished,’ he said. ‘I am horrified at the state of politics in America today, and I will throw stones in multiple directions.’

Winfrey confessed in the same article that she had been among those pushing Iger to run. 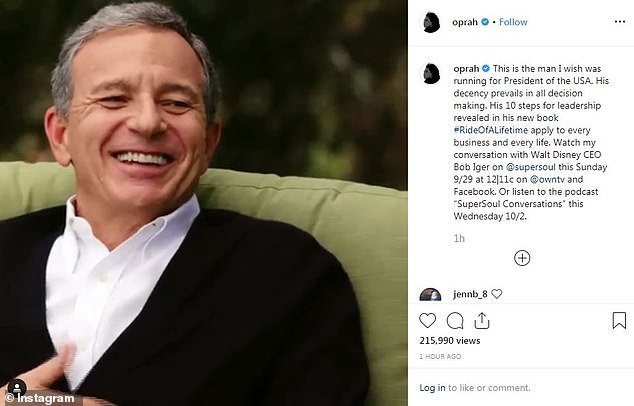 ‘Bob is one of the people I respect most in the world,’ she said. ‘That’s a very short list. He is infinitely capable of multiple categories of expertise, and he has created an environment where you can disagree with him — and that’s not just because I’m Oprah.’

‘I really, really pushed him to run for president, so much so that I said to him, ‘Gee, if you ever decide to run for office, I will go door to door carrying leaflets. I will go sit and have tea with people,’ she continued.

Winfrey’s full interview with Iger will air in a special two-hour SuperSoul Sunday starting at 11am ET on OWN.

The first hour will feature Chanel Miller, formerly known to the world, as ‘Emily Doe,’ who was sexually assaulted on the Stanford University campus. 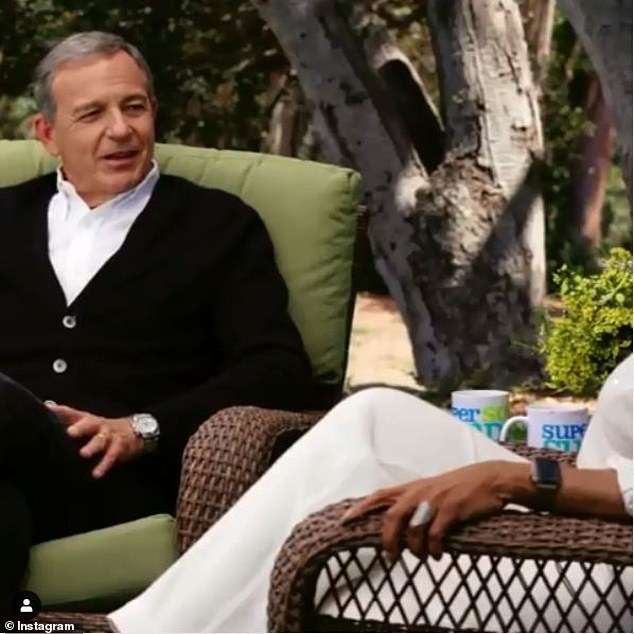 In the interview, Iger also speaks out about his decision to ax the Roseanne revival in 2018 after series star and creator Roseanne Barr tweeted that former Obama aide Valerie Jarrett, who is African American, looked like the offspring of the ‘Muslim Brotherhood & Planet of the Apes.’

Iger says he ‘didn’t think that there was any circumstance that would make that right’ and that what she had said was ‘blatantly racist,’ according to Variety.

‘It took about five minutes to know what we had to do,’ he said, adding that that was not a situation that called for additional context or explanation.

‘It seemed completely insensitive, completely disrespectful,’ Iger said. ‘It was very clear. The decision, it was easy to make. What she had done was very, very clear. I didn’t believe any context could make this better or acceptable or could result in us forgiving her. So we did it. And you also know, in today’s world, if there’s a decision to be made by you, make it — because otherwise the world will make it for you, and that’s never good.’