‘It’s taking us out’: Oprah Winfrey warns coronavirus is ‘ravaging’ the black community and reveals concern for her own health after battling pneumonia six months ago

Oprah Winfrey has warned African Americans to take the coronavirus outbreak seriously as it is ‘ravaging our community’.

The TV mogul warned that the disease is ‘taking us out’ and having a devastating impact on the black community.

She said it is important for ‘black people to understand pre-existing conditions’ like diabetes and asthma put them at greater risk if they contract the virus.

Winfrey also voiced concerns for her own health and said she was staying indoors because she suffered from pneumonia last year and her ‘lungs never really fully cleared’.

Oprah Winfrey speaking at the opening celebration of the Statue of Liberty Museum on Liberty Island in New York last May. She warned African Americans to take the coronavirus outbreak seriously

Speaking to CBS This Morning, Winfrey added that ‘people aren’t getting the message’ about the risk of asymptomatic carriers of the virus.

She told host Hoda Kotb on Tuesday: ‘It’s not only ravaging our community, but people who have preexisting conditions, which I think people didn’t hear that.

Many African Americans have service jobs such as bus drivers pharmacy workers and grocery store employees, that stop them from staying at home and expose them to the virus though contact with the public. 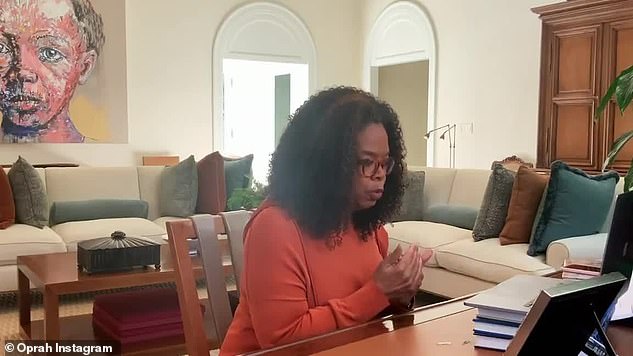 In September Winfrey revealed she was taken to the emergency room with a serious case of pneumonia.

‘So the moment I heard preexisting conditions, I’m like, ”lock the door, nobody coming in here”’, Winfrey said.

Winfrey has discussed the issue of the impact of the virus on black people during the latest installment of her ‘Oprah Talks COVID-19’ series, which is available for free on Apple TV+ starting on Tuesday. 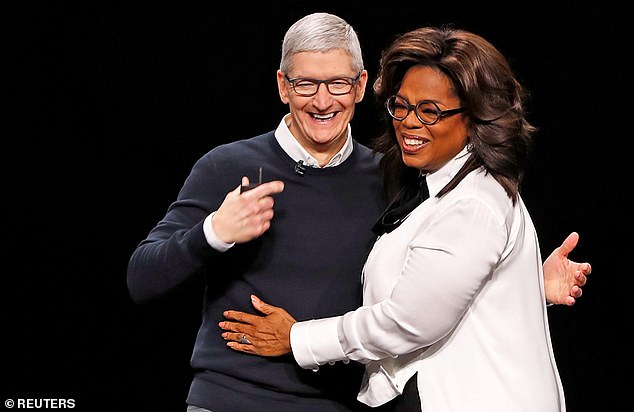 Tim Cook, CEO of Apple, and Oprah Winfrey hug during an Apple special event last march. She has a show in Apple TV+ and joined with the tech firm to donate $1 million to America’s Food Fund

When she interviewed actor Idris Elba, who tested positive for the virus last month but showed no symptoms, Winfrey raised the problem of people spreading the virus without realizing they have it.

‘It’s all these people [asymptomatic carriers], who perhaps could be carriers,’ she said.

Earlier this month, Winfrey announced she is donating $10 million to support people and cities across the country during the pandemic.

She will be committing $1 million to America’s Food Fund, whose goal it is to make sure everyone has access to food.

The fund was launched by Leonardo DiCaprio, Laurene Powell Jobs, Apple, and the Ford Foundation.