Optus fined $1.5 million by ACCC for misleading 14,000 customers saying had to sign up to the NBN

Optus has been slammed with a $1.5 million fine for lying to 14,000 customers by telling them they’d have their internet cut off if they didn’t upgrade to the NBN.

The Federal Court ordered the telecommunications giant to pay up after it misled customers to believe they needed to sign up to Optus’ NBN services when they could have chosen any internet service provider.

Optus benefited by about $750,000 as a result, the Australian Competition and Consumer Commission (ACCC) announced on Wednesday.

Optus (Sydney store pictured) has been slammed with a $1.5 million fine for lying to 14,000 customers by telling them they’d have their internet cut off if they didn’t upgrade to the NBN

Optus also incorrectly told 14,000 of its customers their services would be disconnected in 30 days if they did not upgrade to the NBN.

‘Businesses should not make false representations which distort customers’ decision making. This is particularly important when many Australians are moving to the NBN for the first time,’ ACCC Chairman Rod Sims said.

‘It is illegal for businesses to mislead their customers and create a false impression through their communications.’ 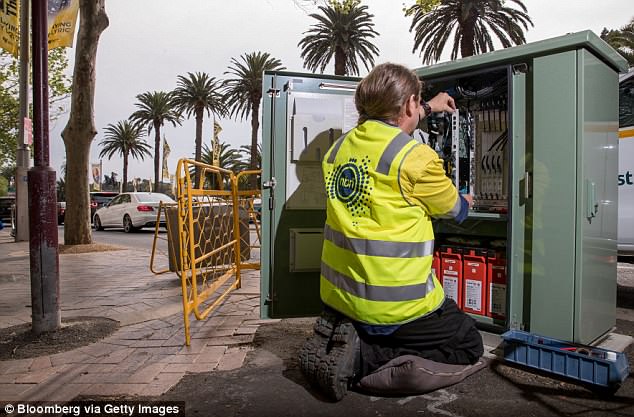 An NBN Co. technician handles hardware in a fiber distribution cabinet during the installation of fiber-to-the-building connections in Sydney

Mr Sims said the $1.5 million penalty ‘serves as a warning to all businesses that such behaviour will be met with ACCC action’.

Since an investigation was launched, Optus has paid $833,000 in compensation to customers whose services were disconnected.