Oscar-winning actor Geoffrey Rush ‘danced totally naked’ in front of Orange Is The New Black-star Yael Stone, and watched her in the show’s shower, the actress has claimed.

Stone, who stars as Lorna Morello on the popular Netflix show, came forward with the new allegations about the behaviour of the Academy Award winner, also claiming he sent her ‘flirtatious’ texts.

The actress said the Pirates of the Caribbean actor danced ‘totally naked’ in front of her in their dressing room in a ‘playful, clownish manner’ and used a mirror to watch her showering during the theatre production in Sydney. 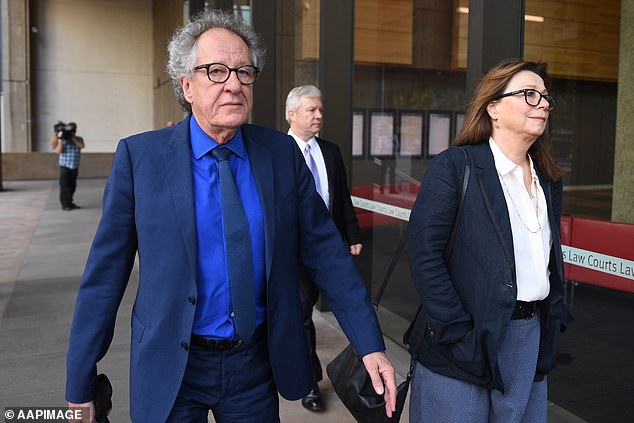 Rush (pictured, left) has disputed the allegations as ‘incorrect and in some instances… completely out of context’

She also made other claims about his behaviour during a 2010 production of The Diary of the Madman when she was 25 and he was 56.

When asked about the shower allegation, Stone said: ‘I believe that it was meant with a playful intention, but the effect was that I felt there was nowhere for me to feel safe and unobserved.’

In a statement, Rush disputed her claims as ‘incorrect and in some instances, completely out of context’.

He said she was ‘upset’ by the ‘spirited enthusiasm I generally bring to my work’ and ‘deeply regret(ted)’ if he caused her distress.

Ms Stone told the Times she was ’embarrassed by the ways I participated’ in the text conversations with Rush, best known for his roles in blockbuster films Shine and The King’s Speech.

She is the second Australian actress to accuse the Oscar winner of behaving inappropriately during an theatre production in the country.

Ms Stone has conducted a TV interview with the ABC’s 7.30 program scheduled to air on Monday night.

In previews of the interview, Stone said, ‘I immediately put myself at the bottom of the ladder. I didn’t advocate for myself.’

‘Geoffrey was working within the boundaries of what he felt was playful,’ she told host Leigh Sales, according to a press release.

In a statement to the Times, Rush disputed the claims but said Ms Stone had been ‘upset’ by his enthusiasm at work.

‘From the outset I must make it clear that the allegations of inappropriate behaviour made by Yael Stone are incorrect and in some instances have been taken completely out of context.

‘However, clearly Yael has been upset on occasion by the spirited enthusiasm I generally bring to my work.

‘I sincerely and deeply regret if I have caused her any distress. This, most certainly, has never been my intention.

‘When we performed in The Diary Of A Madman 8 years ago, I believe we engaged in a journey as artistic comrades.

‘Over the years we have shared correspondence that always contained a mutual respect and admiration. 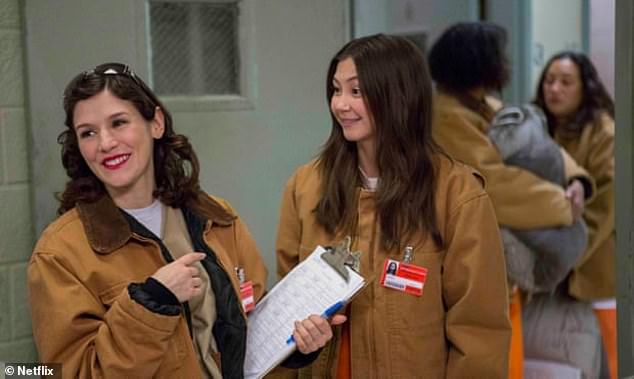 Stone (left) starred as Lorna in Orange is the New Black 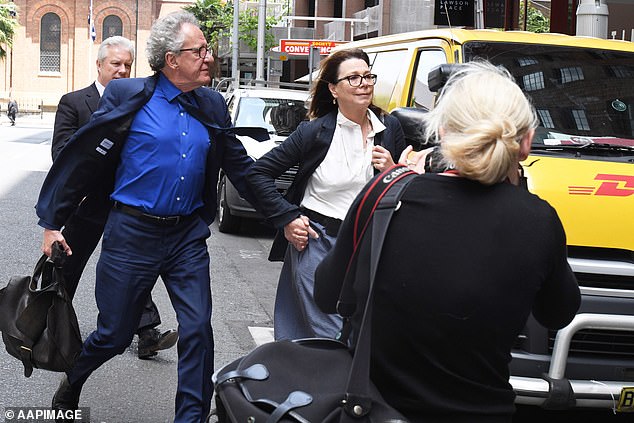 ‘As I have said in the past, I abhor any behaviour that might be considered as harassment or intimidation to anyone – whether in the workplace or any other environment.’

Stone’s agent in Australia, Lisa Mann Creative Management, told Reuters the actor declined to comment further and she stood by her public statements.

The allegations coincide with a defamation lawsuit Rush has filed against News Corp’s Australian arm over articles it published after another actress allegedly filed an internal complaint about his actions during a production of King Lear in 2015 and 2016.

Hearings in that defamation action have concluded and the judge is due to deliver findings in early 2019.

Rush is suing The Daily Telegraph and journalist Jonathan Moran for defamation after the newspaper last year printed claims of inappropriate behaviour on a Sydney theatre set in 2015 and 2016.

He rejected those claims as ‘false, pejorative and demeaning.’

Australia’s tough defamation laws are said to make it difficult for people in the country to speak out about allegations of sexual misconduct by public figures in the same way they have in other jurisdictions.