Oratory School head found dead in the sea after resigning

The former headmaster of an exclusive boarding school was found fully clothed and dead in the sea after quitting the post he held for just one year as he struggled with the job, an inquest heard today.

Adrian Wyles was found floating in the water with all his clothes and one shoe still on, days after he told his wife he had been for a swim in the sea while fully dressed.

He left his post as headmaster at the £11,100 per term The Oratory School in Oxfordshire after just a year after starting due to agitated depression as he struggled with the changes of his new post which ‘just didn’t suit him’.

Adrian Wiles, pictured with wife Dee, was the headteacher of the prestigious The Oratory School in Oxfordshire. He was found dead in the sea after quitting a job that ‘did not suit him’

The challenges of the job as well as the change in family circumstances as he moved his teacher wife Dee and his son from Kent so he could take up the position at the only remaining Roman Catholic boarding school in Britain in 2015 contributed to his mental anguish.

The 49-year-old had bizarrely arrived home in wet clothes just days before his death on May 16 and told his wife he had been for a swim.

Coroners officer Tony Beldam told the inquest in Brighton Coroners’ Court his wife then reported him missing at 9pm on May 15 after noticing the piano the keen musician was playing had fallen silent.

Mr Bedlam said: ‘He was playing piano in the house it was then it was noticed it had stopped playing,’ he said. ‘He left the house leaving no note and took no personal possessions. 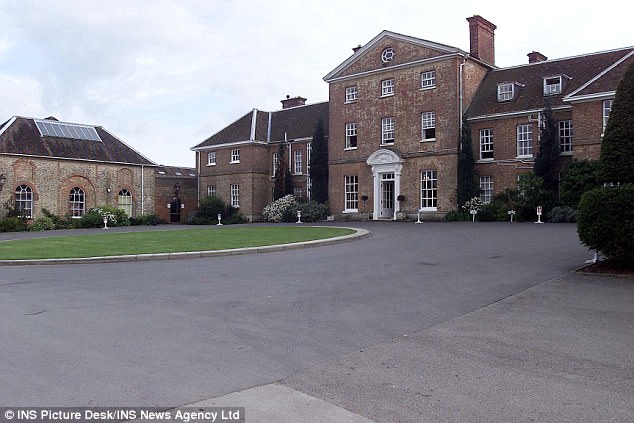 Days before his death, the 49-year-old headmaster of The Oratory School in Oxfordshire, (above), had bizarrely arrived home in wet clothes and told his wife he had been for a swim

‘At 1.50pm the next day Dover Coastguard were contacted with reports a body was face down in the water of Brighton Pier.

‘His clothes were on and there was still one shoe on his foot. He had very minimal injuries.’

A pathologist found the cause of death was salt water drowning.

Senior Coroner for Brighton and Hove Veronica Hamilton-Deeley said Mrs Wyles had told of her husband’s history as a senior teacher but said he began suffering from depression after joining the Oratory in his first role as a headmaster.

The Royal Holloway and Durham University graduate had left his previous job as the deputy head of an independent school, Sutton Valance School, in Kent to start the 2015/16 academic term at the school in Woodcote, Oxon.

‘The long and short seemed to be it didn’t suit him,’ she said.

‘From last year he seemed to be suffering from depression,’ she said. ‘He didn’t get any better in spite of some assistance and I think he spent a short amount of time in hospital and that seems to have helped.

‘He was a good swimmer and had been out before without telling his wife where he was going.

‘He would often go for long walks along the cliff top or along the coast to the marina.

‘She gave him a telling off and said he shouldn’t swim alone because it wasn’t a sensible thing to do.’

Psychiatrist Dr Leon Dinglestad told the inquest he started to treat Mr Wyles after he moved to Wivelsfield Road, Saltdean, East Sussex, to be closer to family as he recovered from his illness.

He told the inquest it was possible changes brought on by his role at the Oratory School could have affected his condition.

‘Apparently the first year is probationary as I understand,’ he said. ‘That shift caused a lot of consequences because it was in a different county – he had been living and working in Kent and this was in Oxfordshire.

‘Somehow it seemed despite his good efforts certain things in that job didn’t work out and he decided he would resign in April 2016.

‘Had become unwell at the beginning of the year.

‘He had always been an active man and he used to like running as well – he used to run quite long distances.’

The psychiatrist said when Mr Wyles swam in the sea for the first time it concerned him but he did not see it as suicidal behaviour.

He said: ‘If you’re on a long, brisk walk you can work up a sweat but to dive into the sea to cool down I find it a bit strange.

‘When we heard he had done that I felt we probably needed to increase the support for him we had.’

In her conclusions, Coroner Hamilton-Deeley said: ‘It seems to me likely he’s left he house and walked for hours on end.

‘He’s certainly carried out a deliberate act but I’d be very hard put to say he’d intended to drown himself.

‘I’d also be very hard put to rule out other reasons for his behaviour. We know he’s done it before and I can’t say the whole episode of the breakdown, as I am in a rather uneducated way I’m referring to it, has caused him to be suicidal.

‘Although his life has changed he’s not somebody who has a strong history of previous suicide attempts or self harm – he’s an intelligent, articulate man who understands what the situation is.

‘I’m going to record this does not reach the standard of proof for a suicide conclusion.’

The coroner recorded a short narrative conclusion which said: ‘Mr Wyles drowned having entered the sea fully clothed on May 16, 2017, and his purpose in entering the water remains unclear.’

When Mr Wyles took up his post as headmaster at The Oratory he told a local paper the decision to join the school was a ‘no-brainier’ and ‘had his eye’ on the top job at the school.

He said: ‘Having been educated in a single-sex environment and worked in co-educational schools, I think you can do things differently for boys in a way that is better for them.

‘Having games day is very important – many want to do that and there are ways of building that into the timetable.

‘Of course, not every boy is like that but there’s also scope to break down stereotypes and encourage them to get involved in activities like the choir or whatever interests they want to push forward with.

‘They can take part in all sorts of things without putting on affectations or worrying about how they might be seen. We don’t see them all as rugby players but offer lots of niches to develop in.’

The teacher had began his career in 1990 when he thought at comprehensives in London and Kent.

He replaced Clive Dytor, a former Royal Marine and Falklands veteran and was in turn replace by the current Head Master Joseph Smith.

The school website states: ‘The Oratory School is set in a stunning Chilterns estate, we offer a unique education for our boys whether day or boarding.

‘We have a clear focus on pursuing excellence in all we do and on ensuring that every boy fulfils his maximum potential, developing his mind, body and soul in the process.’