The West Virginia woman who fatally shot her three kids and two step-kids before burning them all down in their family home was into witchcraft, posting rituals and jars of dead butterflies to her social media.

Oreanna Myers, 25, shot and killed herself after burning down the home in Greenbier County with the children’s bodies inside on December 8.

A peruse of Myers’s Instagram account, @glowing_goddess520, reveals that the mother actively participated in rituals related to witchcraft and spiritualism.

Oreanna Myers, 25, shot and killed herself after burning down the home in Greenbier County with the children’s bodies inside on December 8 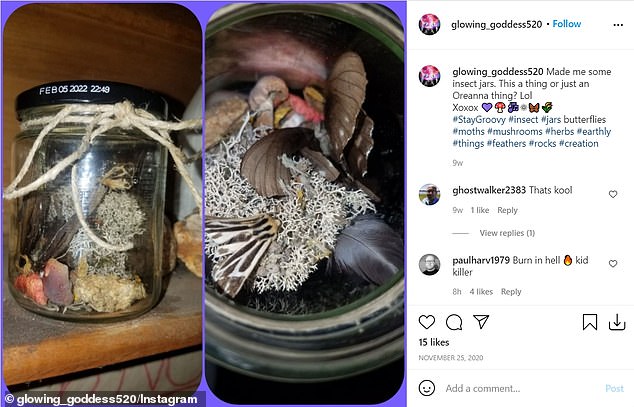 A peruse of Myers’s Instagram account, @glowing_goddess520, reveals that the mother actively participated in rituals related to witchcraft and spiritualism 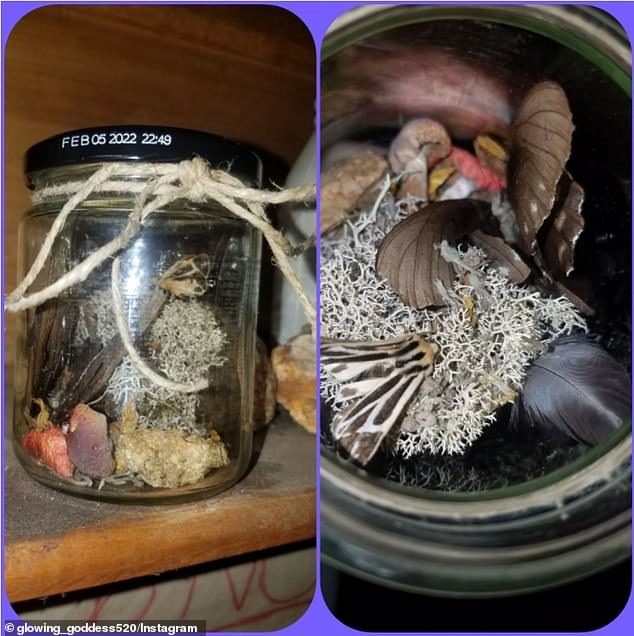 On November 25, just under three weeks after the murder-suicide, Myers posted a photo of insect jars

‘Made me some insect jars. This a thing or just an Oreanna thing? LolXoxox,’ she said in the post.

Myers made a series of post about a ‘powerful manifestation day’ on Nov. 11, even posting a photo of the ritual she performed that night at 11.11pm. 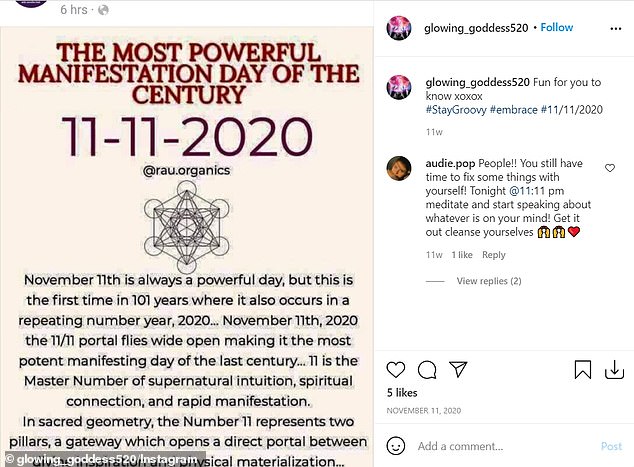 Myers made a series of post about a ‘powerful manifestation day’ on Nov. 11 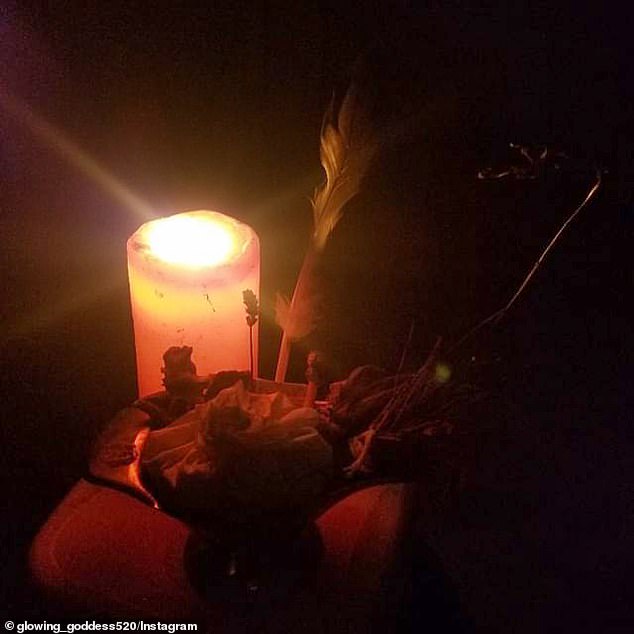 She even posting a photo of the ritual she performed that night at 11.11pm 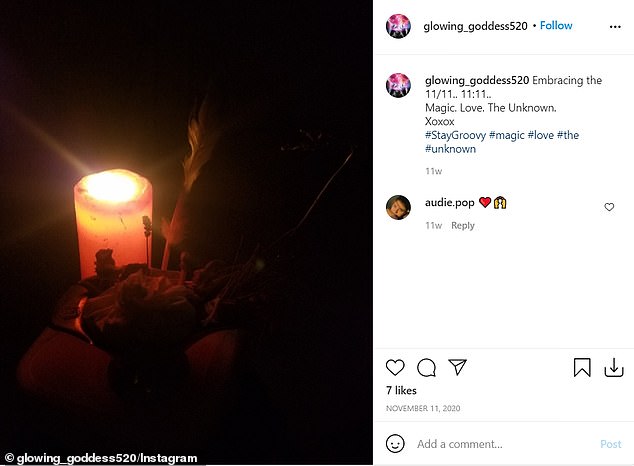 She also shared a photo of a fairy figurine that she had, saying on Instagram: ‘Fairies and Flowers are my magical thing.’

In addition to those images, Myers posted a series of memes on the page along with images of women embracing each other.

‘Honestly, go ahead and be kooky and get into weird mystical s**t or whatever,’ one meme reads. ‘Life is short. Reality is fake. F**k the haters.’ 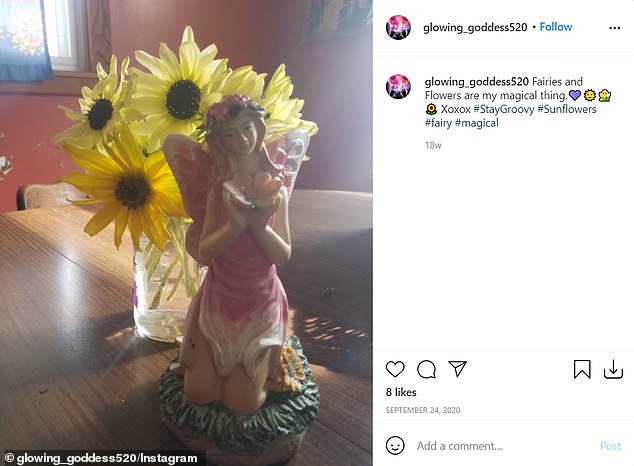 Myers also shared a photo of a fairy figurine that she had, saying on Instagram: ‘Fairies and Flowers are my magical thing’ 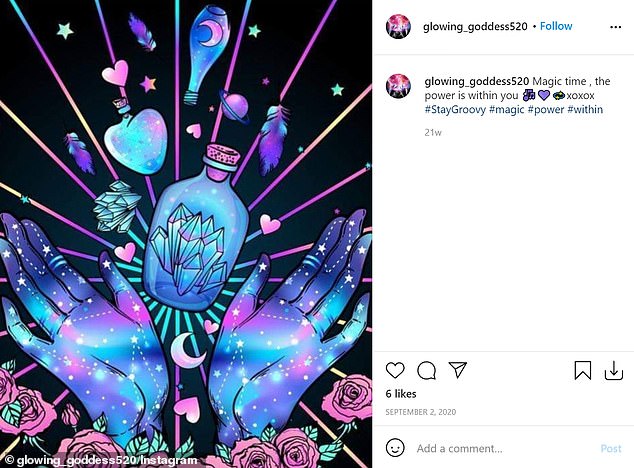 In addition to those images, Myers posted a series of memes on the page along with images of women embracing each other 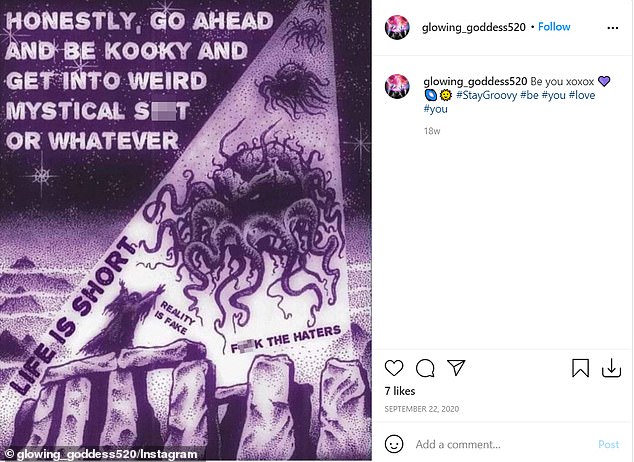 ‘Honestly, go ahead and be kooky and get into weird mystical s**t or whatever,’ one meme reads. ‘Life is short. Reality is fake. F**k the haters’

While it is unknown whether witchcraft had anything to do with the murder-suicide on Dec. 8, one of Myers notes does make mention of her ‘demons’ winning over her. 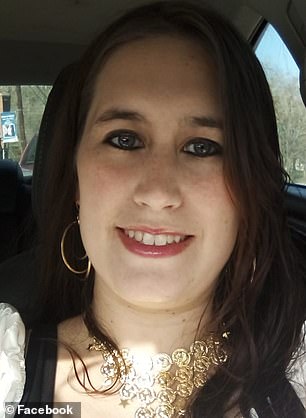 Raven Bumgarner (pictured) lost her sons Shaun Dawson, 7, and Riley James, 6, in a tragic murder-suicide committed by their step mother on December 8

They were killed by her ex’s new wife Oreanna Myers, 25, who also fatally shot her own children – Kian Myers, 4; Aarikyle Nova Myers, 3; and Haiken Jirachi Myers, age 1 –  before burning down the family home.

Law enforcement officials in Greenbrier County only revealed the harrowing details of the shootings last week, saying that the ‘depressed’ step mom had fully confessed to the crime in suicide notes.

‘It’s like your soul is ripped out of you,’ Bumgarner told The Sun of the loss of her two boys.

‘How could you do that to children? They had full lives ahead of them. I feel she was of complete sound mind, she didn’t write me a letter, she was selfish and she wanted to hurt people.

‘This was planned, and I can’t get my boys back, she murdered my babies,’ added Bumgarner, who also has a three-year-old daughter, Khari, from a previous relationship.

‘It’s hard. It really is hard, I probably wouldn’t be here if I didn’t have my daughter. 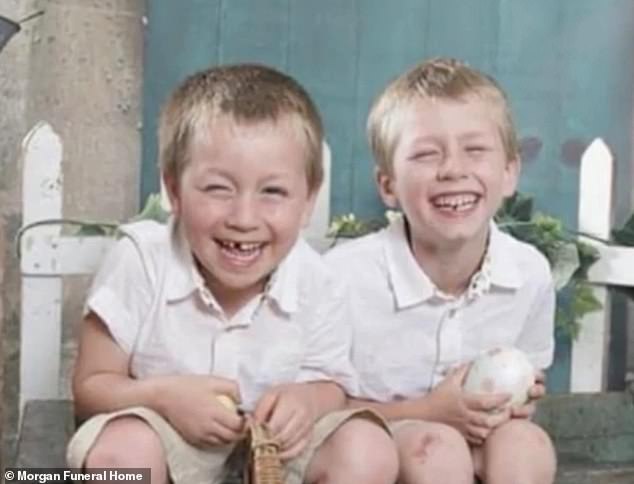 Shaun Dawson, 7, and Riley James, 6, died in the tragic murder-suicide on December 8 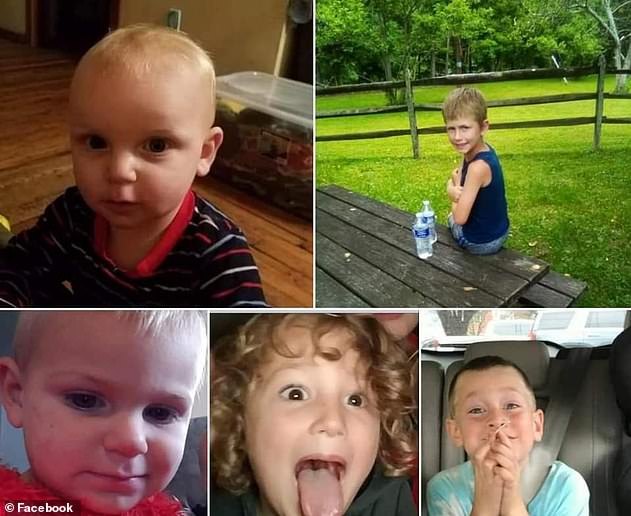 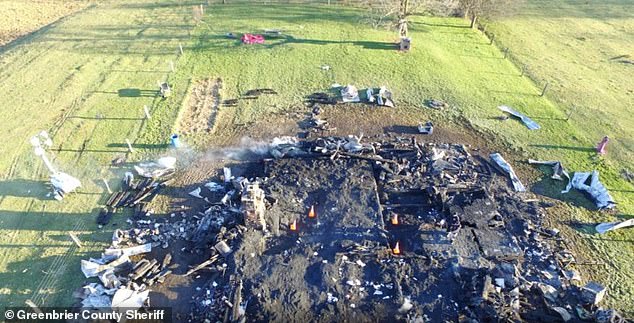 First responders were called to the family’s home after getting reports of a fire on December 8, as pictured above. There, they found the bodies of the children and Myers 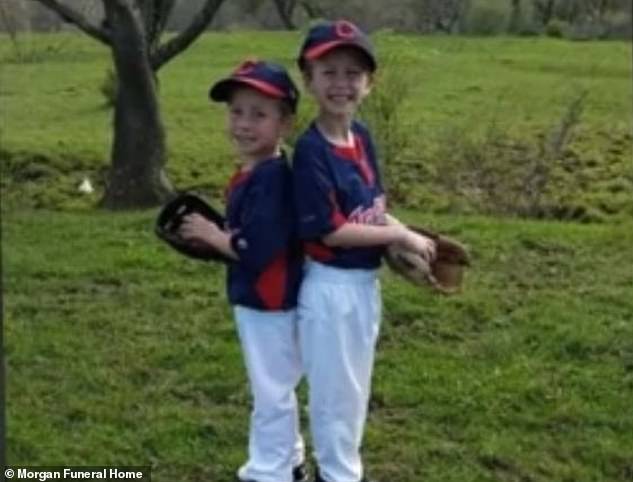 Shaun Dawson, 7, and Riley James, 6, were Brian’s kids from his first marriage to Raven

According to the local sheriff, Myers was upset that her husband, Brian Bumgarner, had been staying with relatives during the work week due to transportation issues, instead of coming home to her.

Text messages between Myers and her husband showed that his absence during the week had been ‘a tremendous source of contention’ between them.

According to the sheriff, the woman grew more desperate after Brian left the house on December 6 after dropping off groceries for his family.

‘You’ll have nothing to come back to but to corpse [sic]. No one cares why should I?’ Myers texted her husband.

‘Money will come and go, once I go there’s no replacing me. I beg and cry for help but never get it. It’s my mental health that needs tending to–help me– I do not care anymore.’

Raven shared 50-50 custody with Brian and said that she had made small talk with Oreanna as she dropped her boys off to stay. 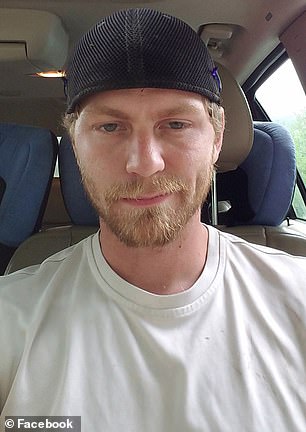 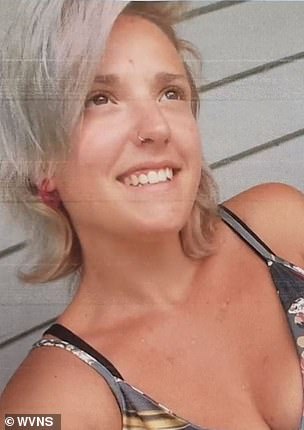 Brian Bumgarner (left) was married to Oreanna Myers (right) when she shot her three sons and two step-children at her home near Williamsburg on December 8. According to police, Myers was upset that her husband had been staying with relatives during the work week 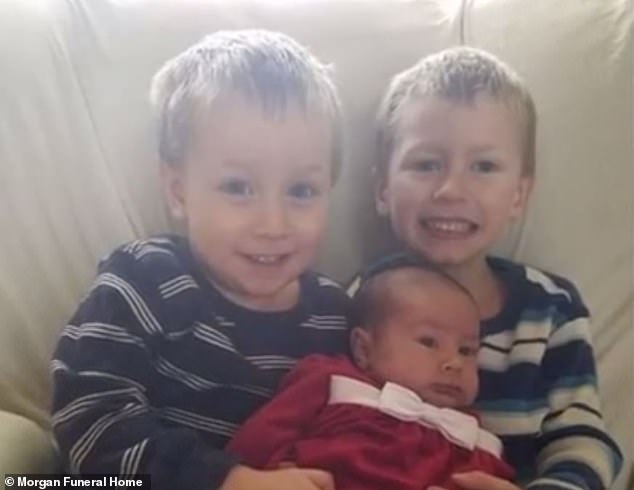 Raven Bumgarner had two sons, Shaun and Riley (pictured above with their younger sister) with Brian and they shared 50-50 custody over the boys 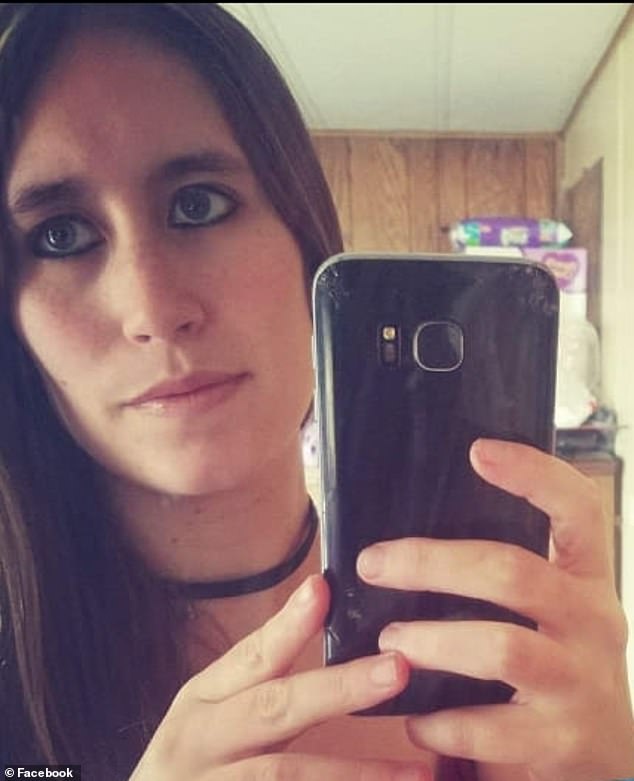 ‘[I believe] she wanted to take everything from Brian,’ Raven said.

Speaking to the media last Thursday, Greenbrier County Sheriff Bruce Sloan said the five children’s bodies were found with shotgun wounds to the heads inside the Williamsburg home, while Myers was found outside near a picnic table.

Sloan described how Myers was found, revealing that she was wearing a coat with a hood, and had a red line drawn across her face from ear to ear, reported MetroNews.com.

The mysterious line was seen on surveillance video when Myers had gone to pick up two of her sons from the bus stop at the end of the school day.

One of the boys asked her if it was blood on her face, but Myers replied she had just drawn the line.

An hour later, emergency dispatch got a 911 call about a house fire on Flynns Creek Road. When firefighters arrived on the scene just before 4pm, they found the residence engulfed in flames.

Raven described how she had received a message from Brian’s cousin on the day of the tragedy telling her not to panic but sending a picture of a fire at the house.

‘I called Brian and he was on his way home, I jumped in my car and left my daughter with a sitter,’ Raven said.

‘The whole way there I was expecting to see all five children and Oreanna outside. The farm was packed with people, but nobody could tell me anything.

‘It was like, “Check the barn, check the barn”. And I was waiting for them [the boys] to come out of the woods.

‘My brother was telling me, ‘Don’t do anything stupid” because he knew that I would jump in and try to go get my kids. But there was nothing to jump in to, there was a chimney standing and flames.’ 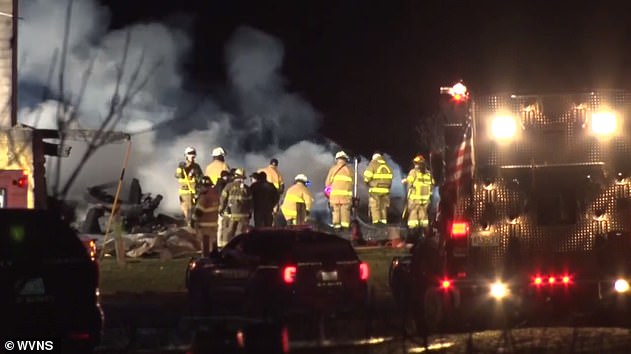 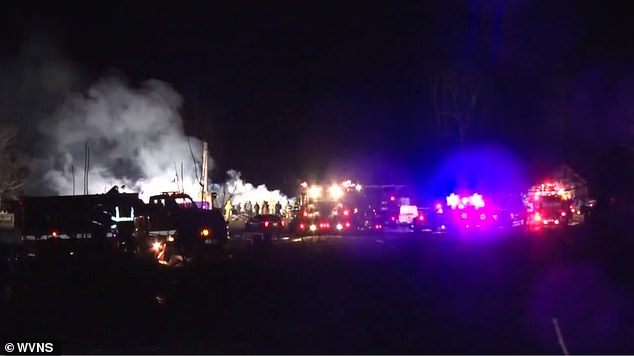 Four of the children were found dead inside the house that same day, but the fifth child’s body was only recovered from the debris four days later, reported WVNS-TV.

Raven revealed that it was hours before she received confirmation that her two sons were dead.

‘She shot all five kids in the head and set the house on fire and went outside and shot herself,’ Raven said.

‘They [cops] described she used a single action shotgun. You have to break it down and reload it after every single shot.

‘How can you do that five times to five children?

‘In these letters she’s apologized, making it all about mental illness,’ Raven added, referencing the suicide notes left by Oreanna.

‘But she did it five times, wrote four different letters, you set this up, this wasn’t just some mental illness, it was planned.’

Sheriff Sloan said he was unaware of whether Oreanna was under treatment for any diagnosed mental illness at the time of the deaths.

But in several notes she left before carrying out the murder-suicide and setting fire to her family home, Myers complained about the lack of treatment for mental illness, according to the sheriff. 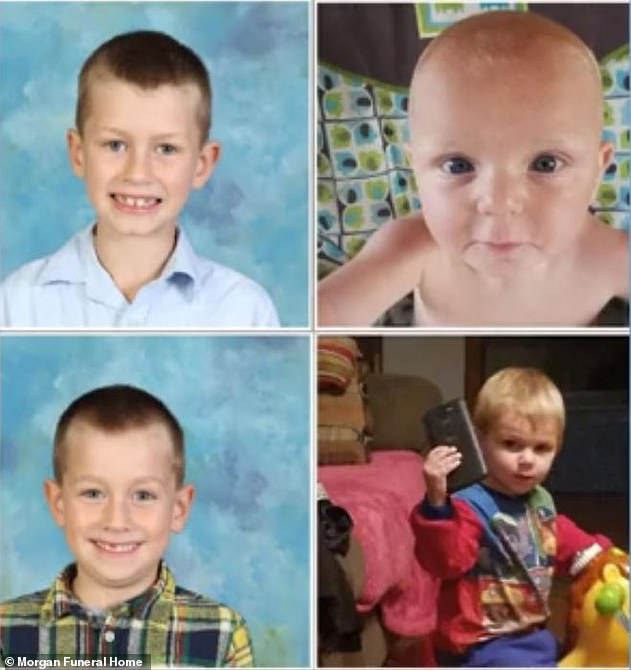 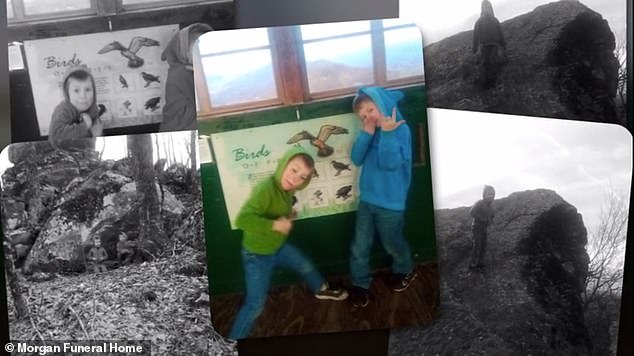 Raven and Brian had shared custody of Shaun and Riley, pictured above 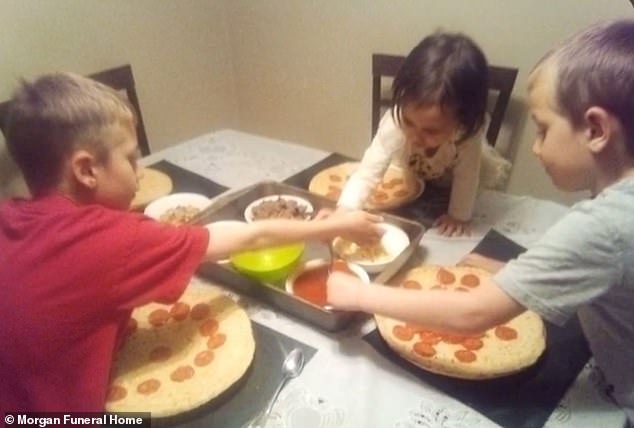 Shaun and Riley pictured with their younger sister Khari

‘This is no one’s fault but my own. My demons won over me. Sorry, I wasn’t strong enough,’ she wrote.

Myers texted her husband the day of the shootings saying she left something for him in their vehicle. A letter addressed to him was found inside with a bloody fingerprint next to her initials, Sloan said. 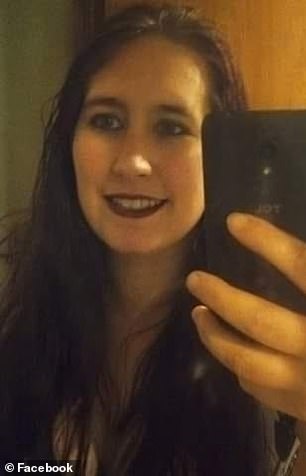 Raven, pictured, said she has been able to go back to the house where they died

The sheriff said the woman also placed three notes inside a plastic bag and taped them to a side-view mirror on the family vehicle, including phone numbers to reach relatives, a confession and a will.

‘Mental health is serious. I hope one day someone will help others like me. Mental health is not to joke about or taken lightly. When someone begs, pleads, cries out for help, please help them. You just might save a life or more lives. Thank you, OAM.’

Also recovered from the vehicle were glass jar with a crystal and a cloth decorated with a spiral symbol.

Brian Bumgarner has stayed out of the public eye over the past month after his children’s deaths.

One day after the murders, he took to Facebook, sharing a status with his friends which read: ‘I just wanted to say sorry and thank you to everyone reaching out to me and messaging me. I can’t get back to all of you but in a truly dark time, I feel like I could fall and all of you guys would catch me.

‘It gives me something… I don’t know what. Maybe it be hope or strength or grit, I don’t know. All I know is I have something and that’s not nothing!!!’ he added. 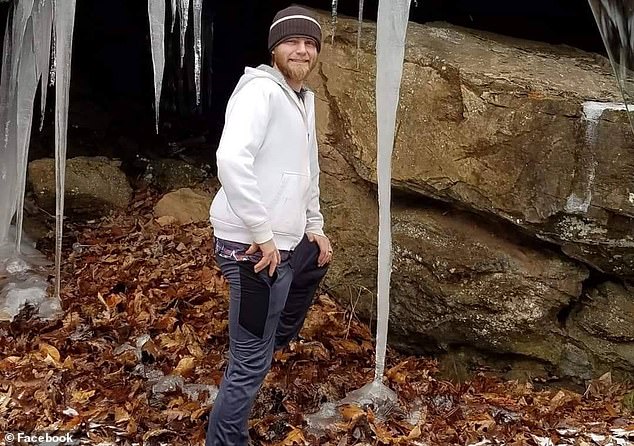 Myers was upset that her husband, Brian Bumgarner, had been staying with relatives during the work week for logistical reasons. Prior to the killings, Myers texted Bumgarner (pictured above), warning him that he would come home to find a ‘corpse’ 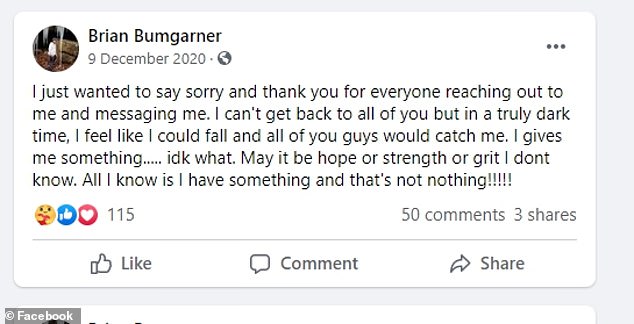 Ravan said she met Brian when she was 13 and he was her ‘childhood sweetheart’ who she married at 19.

When they split up, Brian met Oreanna shortly afterward in 2016 and told Raven that she would be a ‘better mom’.

‘I busted my butt, I went back to school to do college online, I paid off the trailer, I got my car by myself, I got this house by myself, I did everything I could as a single mother,’ said Raven, who just recently moved into a house in which she had hoped to share a first Christmas with her three children.

‘I wanted to give them everything I never had,’ said the young mother, who herself grew up in foster care.

‘I aged out of state care, those boys saved me, they made me into a better person. I’ve never told someone I loved them with my whole being except for my kids.’

‘It’s waking up [and thinking] ‘I gotta get breakfast ready for the kids’, just to realize you only have one,’ she added of their sudden loss.

‘I can’t even bring myself to go back up there [where they died] because it’s expecting them to get in my car.’

Raven said that her youngest daughter now keeps asking for her older brothers and that they are both in therapy.

‘The first few days she kept asking where they were at,’ she said.

‘I kept trying to say with God or in heaven, but she didn’t understand that concept yet. I have to explain. They can’t come back but you can talk to them.’