Oregon Governor Kate Brown on Friday met with three state troopers who were caught on surveillance video refusing to wear face masks in a coffee shop despite her statewide mandate.

One state trooper was placed on leave after allegedly telling shop staff ‘F**k Kate Brown’ when asked about wearing a mask.

Three others are under investigation after also being seen in the shop in Corvallis without masks on Wednesday, the same day that Brown’s statewide order went into effect.

Gov. Brown, a Democrat, met with three of the troopers in question to discuss the incident, stating that she ‘is focused on saving lives, not firing people for making a single mistake’.

She and the three unidentified troopers all wore masks for the meeting.

Oregon Governor Kate Brown sat (pictured left) down with three unidentified Oregon State Troopers (pictured right) who where seen on video earlier this week not wearing masks in defiance to a statewide order. She said the troopers ‘pledged to do better’

‘In the world of social media, it’s easy to condemn someone when they make a mistake and keep scrolling by. But you can judge a person’s character by whether they own up and make things right,’ Brown wrote on Facebook, alongside a picture of the meeting.

‘We talked about kids, our families, and the importance of setting a good example. They took responsibility and expressed real regret for their actions. And they pledged to do better,’ she added.

‘The officers and I agreed today that face coverings save lives. So you’ll see them – and me – wearing a face covering each and every day until we beat this virus.’

Video footage of the troopers ordering coffee and sitting in the shop maskless was first revealed Thursday when Allan’s Coffee & Tea provided the surveillance to Oregon Live.

According to the store’s assistant manager, Travis Boss, the first trooper arrived by himself without a mask at around 8.30am Wednesday and he told him that he needed to wear one.

‘Governor Brown has no authority to take our civil liberties. We aren’t going to wear masks,’ the trooper, who is a regular at the store, allegedly said.

‘F— Kate Brown,’ he added, according to Boss.

The video surveillance of the incident does not have audio. 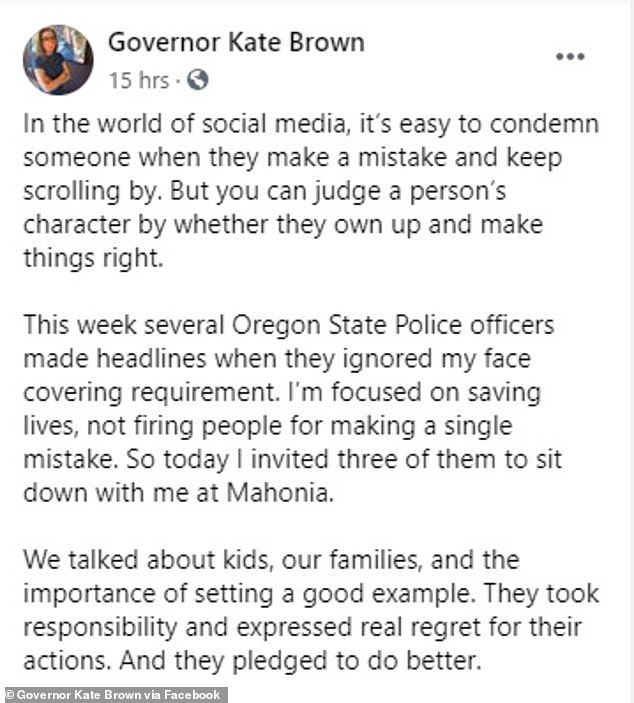 Gov. Brown shared a statement on Facebook about the incident in which she said she met with the troopers to discuss wearing face masks and how they can prevent spread of coronavirus

In the footage, three other officers later enter the shop – all maskless – and greet the first trooper before ordering their own drinks and sitting down.

Boss said he felt compelled to complete their order despite their refusal to wear masks as they were all in uniform. He said he sent patrons away earlier for not wearing masks.

‘He’s a state trooper, he’s in uniform,’ Boss told Oregon Live. ‘He’s more or less saying, “This is how it’s going to be, and this is what I want”.”

Boss added that he called the store owners to ask them how to proceed and they said to inform the police and to tell the troopers that they should leave.

At the end of the video, he is seen approaching the table where the four troopers are sitting and speaking to them before they get up to go.

‘That’s Corvallis for you,’ one of them allegedly said. 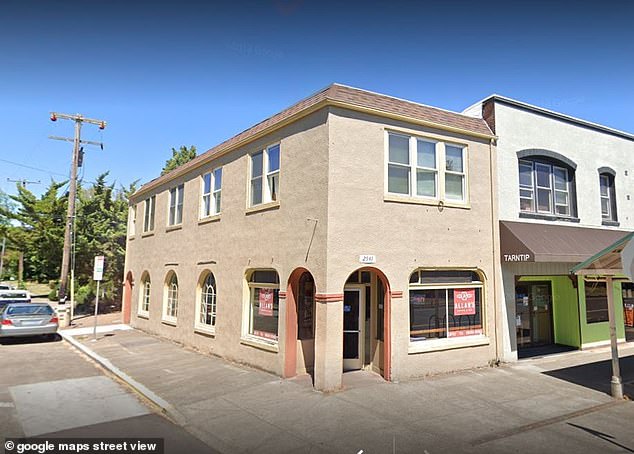 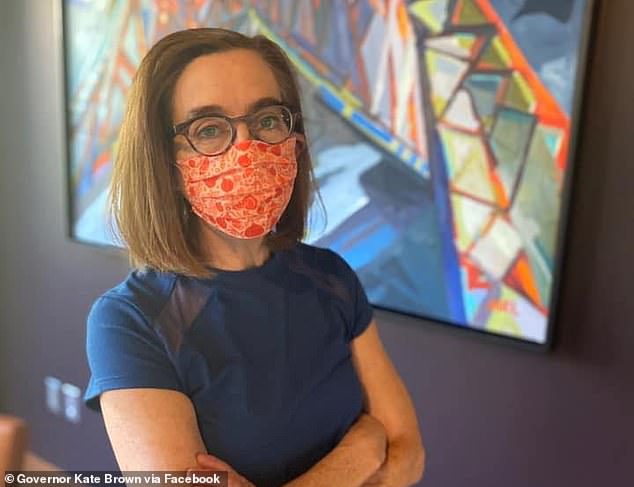 Gov. Brown, pictured, on Friday increased enforcement of face masks and social distancing in Oregon as the coronavirus outbreak in the state drastically worsen. The confirmed coronavirus case count in the state has more than doubled in the last month to 9,600 cases

The store reported the incident to police and the trooper who made disparaging remarks about Gov. Brown has since been placed on leave.

None of the troopers have been identified but were assigned to Oregon State University.

‘OSP is early in the investigation, but if found to be true, we are thoroughly disappointed and expect our troopers to follow the governor’s executive orders and be examples in the community.’

Superintendent Hampton called it particularly worrying in light of the ongoing protests in Oregon against police brutality and said that he hoped to make clear that ‘Oregon State Police Troopers are not above the law’. 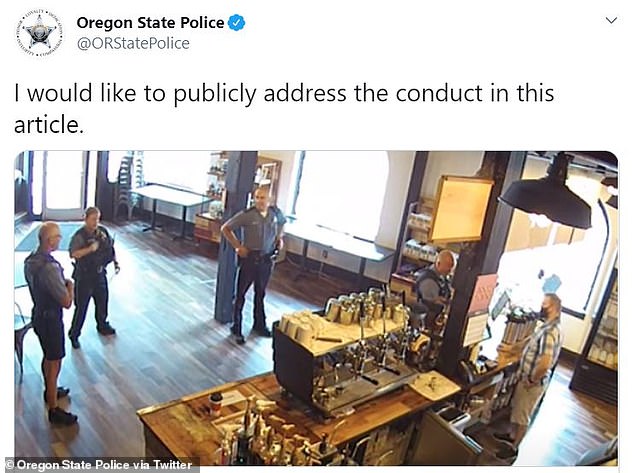 ‘Not only are police officers expected to comply with the Governor’s emergency declaration orders, I expect them to set the example for Oregon’s residents as we strive to fight this invisible enemy- the Coronavirus,’ Hampton said in a statement via Twitter.

‘This conduct is embarrassing and indefensible, especially in the wake of thousands of Oregonians taking to the streets each day to rightfully demand police accountability.

‘Like any police misconduct, the actions of a few bring discredit to the scores of dedicated officers that do not believe they are above the law they are sworn to uphold,’ he added.

‘I would like to offer my apology to the coffee shop employees and the community. I am ultimately responsible for all actions of OSP Troopers & should rightfully be accountable for their conduct.’ 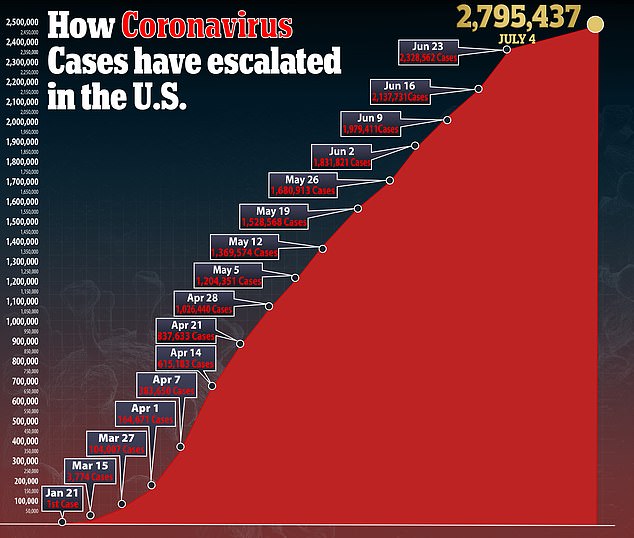 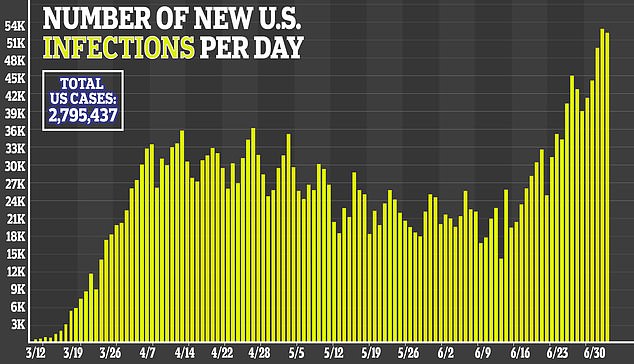 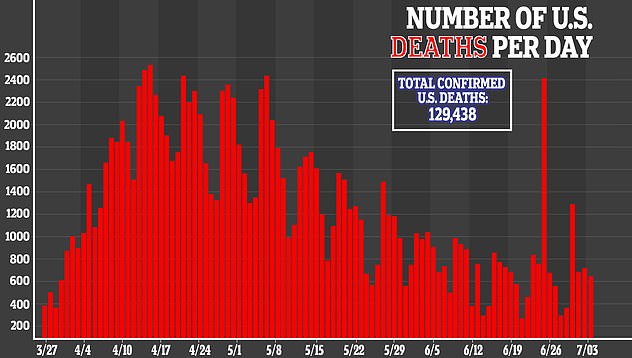 Masks are not required when eating or drinking but should be worn at all other times in bars, breweries, brewpubs, wineries, tasting rooms and distilleries.

Brown had implored people to wear a mask as a ‘simple, common sense way to protect yourself and others’.

It highlights the difficulty for some businesses who wish to uphold the state’s requirements but don’t want political run-ins with their patrons.

On Friday, Gov. Brown announced increased enforcement of face masks and social distancing as the coronavirus outbreak in the state drastically worsens.

The state’s number of new daily coronavirus cases soared to a record Thursday for the second consecutive day.

There were 375 new cases confirmed.

Over the past month, the confirmed case count in the state has more than doubled, topping 9,600 total cases.

At the end of May, Oregon only had about 4,200 cases, according to KGW.