An Oregon police officer was cleared of any wrongdoing after a video appeared to show him flashing a ‘white power’ sign during a Black Lives Matter protest on the Fourth of July.

The Department of Oregon State Police announced that it launched an investigation into the disturbing allegations after footage was shared to social media.

Video shows at least six Oregon officers in between Black Lives Matter supporters and a group of counter-protesters at a peaceful demonstration on Saturday in Salem.

The accused officer appears to walk towards a counter-protester before making an ‘OK’ sign – joining his left thumb and index finger while stretching out his remaining three fingers.

A counter-protester then gives the officer a congenial slap on the back.

The gesture has recently been associated with the white power movement, but Oregon police chiefs now insist that the officer was checking if the man was okay after he had apparently been pushed over in a scuffle.

The demonstrator has been accused of being a Proud Boys member on social media, but this has not been confirmed.

The videos’s caption read: ‘Tell me again how defund the police is wrong when no one even bats an eye at a policeman in Oregon flashing a white power sign at a Proud Boy that he’s obviously chummy with.’

The hand symbol, once harmless and typically meaning ‘OK’, was initially associated with ‘white power’ as an online joke, but has since been adopted by fringe racist figures.

‘By 2019, at least some white supremacists seem to have abandoned the ironic or satiric intent behind the original trolling campaign and used the symbol as a sincere expression of white supremacy’, according to The Anti-Defamation League.

An officer with The Department of Oregon State Police was accused of making a white power hand gesture during a Black Lives Matter demonstration in Salem, Oregon 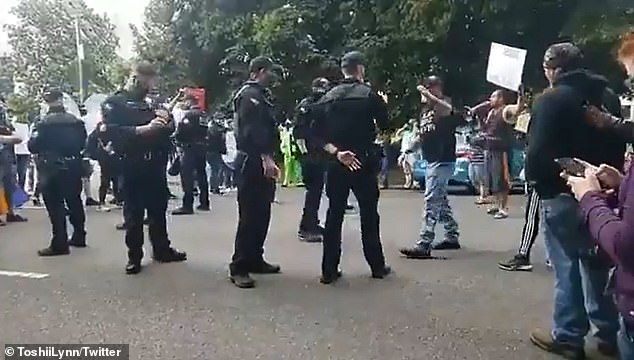 Social media identified the counter-protester as a Proud Boys member, but this has not been confirmed

However, the ambiguous nature of the gesture is part of the appeal to extremists.

Joe Smothers, the 20-year-old man who captured the moment on film, told NBC News that some of the counter-protesters may have been affiliated with the hate group, Proud Boys.

‘Proud Boys and the armed militia planned to disrupt the protest and have been putting out a call to arms for the past week,’ said Smothers.

He added that Proud Boys members had been flashing the white power hand gesture throughout the day. 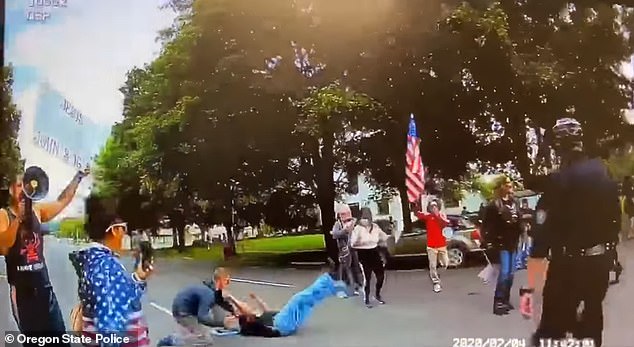 Protests against racial injustice and police brutality have sparked across the United States after the death of George Floyd and other Black Americans, including Breonna Taylor and Elijah McClain, were killed by law enforcement.

As a result, the law enforcement institution has sputtered into a crisis as Americans reexamine the role police officers have and should play when policing communities.

Footage of the alleged ‘white power’ incident raked in more than 2.5million views, prompting officials to open a brief investigation into the matter.

The department, which The Oregonian reports in 93 per cent white, later claimed that the ‘white power’ hand sign was a misunderstanding. 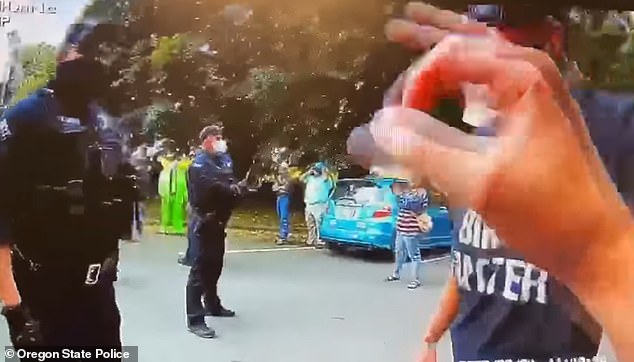 ‘The OSP Trooper identified in the video did not engage in any white supremacy behavior, implicitly or explicitly.,’ the department wrote.

They said the incident began when a two men got into a scuffle during the demonstration and a counter-protester was knocked onto the ground.

The officer was allegedly checking if the assaulted man was okay and flashed the hand sign.

‘An OSP trooper approached the man and asked if he was unharmed- while simultaneously displaying the hand signal commonly associated with “okay”,’ the department wrote.

‘Best available evidence indicates the trooper was simply checking on the man’s status and used the universal signal to signify this inquiry, which the man gestured he was- then patted this trooper and a second trooper on their shoulders in an apparent signal of appreciation.’

How the ‘OK’ sign came to be associated with white supremacy

The historic hand sign for OK – touching the forefinger to thumb with other three fingers raised – is a formerly innocent symbol that has recently been co-opted by the far right.

The symbol’s co-option by racists began as a joke on far-right messaging site 4Chan – where users took an innocent gesture and pretended there was a hidden meaning behind it, hoping to trick left-leaning people into outrage.

But the joke escalated and soon the symbol was being widely used among far-right extremists, leading some people to conclude it has changed its meaning. 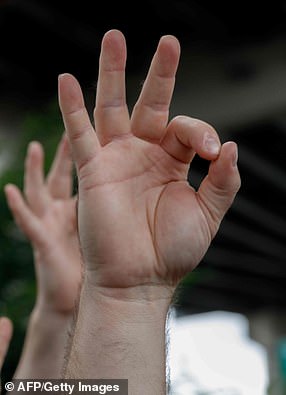 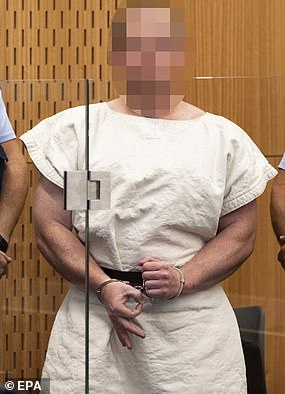 The ‘OK’ hand gesture (left) is now sometimes associated with white supremacy despite its usually innocent meaning. Brenton Tarrant, the Australian man arrested for killing 51 people at mosques in New Zealand earlier this year, is seen right making the gesture in court in March

Conservative Viner Pizza Party Ben and the alt-right’s former pin-up boy Milo Yiannopoulos began making the gesture at various campaign events for Donald Trump in the lead up to the 2016 election.

The popular emoji has been registered as a hate symbol by the US-based Anti-Defamation League, but the group warned it is still ‘overwhelmingly’ used to show approval or that someone is OK.

Others use it as part of a ‘circle game’ created on US TV show Malcolm in the Middle, which involves someone making the gesture and holding it below their waist. If someone else looks at it, they get a punch in the arm.

The police body camera footage shows a counter-protester being shoved and falling to the ground.

Authorities said Christopher Davis, 50, of Salem, was arrested for disorderly conduct and harassment after the incident.

This is not the first time in recent weeks that a police officer has been accused of flashing the white power sign.

An investigation was launched in June after a New York City police officer was caught on camera making the ‘OK’ sign.

In 2019, officials at West Point and the US Naval Academy in Annapolis opened an investigation after several cadets and midshipmen were seen flashing the sign at the Army-Navy football game. 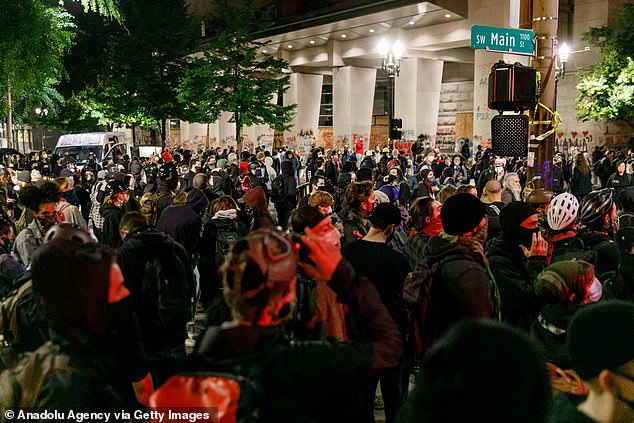 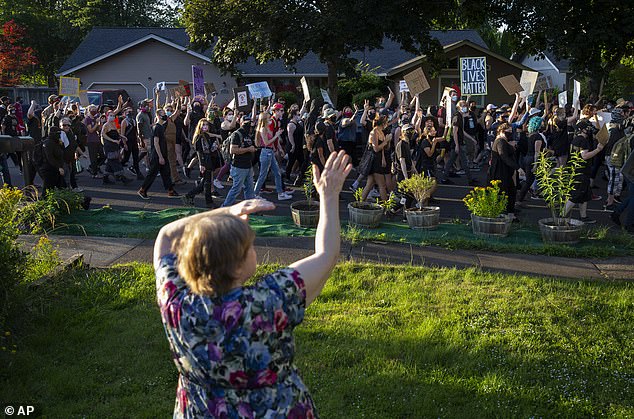 Rita Castillo waves to Black Lives Matter marchers as they pass her home in Springfield, Oregon, on Friday, June 27

Law enforcement has come under intense scrutiny in recent months. Several departments, including the Los Angeles Police Department and the New York Police Department, had their budget slashed by city officials.

The Minneapolis Police Department was abolished after city council members voted in a landslide victory of 12-0.

The focus on law enforcement, specifically police brutality and excessive force, has become a contentious debate among Americans.