Orion powers up: NASA switches on moon and Mars capsule

NASA has powered up the capsule that will soon take man around the moon – and beyond.

The Orion spacecraft destined for Exploration Mission-1, an unmanned mission planned for next year, was successfully powered up for the first time this week in Orion’s spacecraft factory, the Neil Armstrong Operations and Checkout Facility at NASA’s Kennedy Space Center in Florida.

It will be sent hurtling beyond the Moon at 25,000 mph for a three-week mission, and will pave the way for NASA’s manned deep space exploration plans.

The Orion crew module for NASA’s Exploration Mission 1 (EM-1) is secured in a work station in the Neil Armstrong Operations and Checkout Building high bay at NASA’s Kennedy Space Center in Florida. The spacecraft is being prepared for its first integrated flight atop the Space Launch System rocket on Exploration Mission-1, which will blast off in 2019

The uncrewed Orion will travel into Distant Retrograde Orbit, breaking the distance record reached by the most remote Apollo spacecraft, and then 30,000 miles farther out (275,000 total miles).

The mission will last 22 days and was designed to test system readiness for future crewed operations.

During the initial power-on tests, engineers and technicians connected the vehicle management computers to Orion’s power and data units to ensure the systems communicate precisely with one another to accurately route power and functional commands throughout the spacecraft for the duration of a deep-space exploration mission.

‘The initial power-on procedure verified the health and status of Orion’s core computers and power and data units and marks the beginning of critical spacecraft subsystem tests to get us ready for flight,’ said Mark Kirasich, NASA Orion program manager.

‘Our test team, ground support equipment and flight systems all performed remarkably well during the test.

‘This is a major milestone for Orion and for our long range deep space exploration plans.’

In spaceflight, Orion will generate power through its four solar array wings which collectively hold about 15,000 solar cells that can harness enough electricity to power eight three-bedroom homes.

The power and data units then distribute that power as needed throughout the spacecraft. 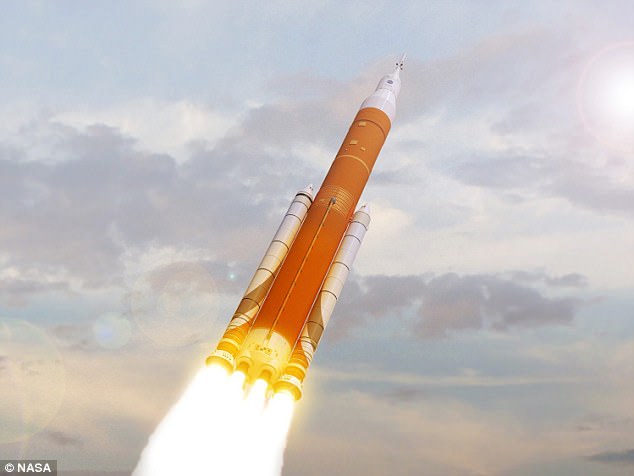 ‘The journey will not be easy,’ the video explains, as the crew will be subjected to lift-off vibration that will make it difficult to read their screens

‘The spacecraft’s power and data units and core computers will continue to undergo additional testing of various components over the next two to three months,’ said Rafael Garcia, NASA Orion program test and verification lead at Kennedy.

The capsule requires a space processor capable of operating with guaranteed reliability, in a high radiation environment tens of thousands of miles in deep space, at 480,000,000 instructions per second to execute thousands of commands and sequences for controlling the hundreds of spacecraft systems and components to ensure crew safety and mission success.

During the initial power-on tests, engineers and technicians connected the vehicle management computers to Orion’s power and data units

Last month Lockheed Martin revealed footage of the extensive safety testing underway on the Orion spacecraft, the deep-space capsule that could one day bring humans to Mars.

Orion will have to withstand harsh vibration, extreme temperatures, and dramatic fluctuations in speed and pressure as it exits and re-enter’s Earth’s atmosphere, all while protecting the astronauts inside.

As the footage shows, quite simply, ‘space travel is hard’ – but once the tests are complete, the researchers say Orion will be the safest spaceship in the world. 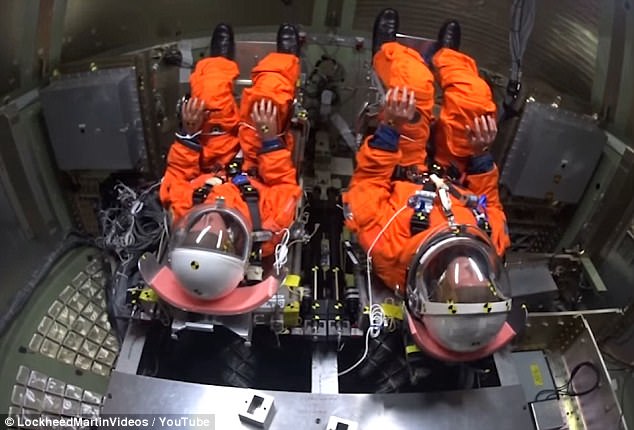 Orion will have to withstand harsh vibration, extreme temperatures, and dramatic fluctuations in speed and pressure as it exits and re-enter’s Earth’s atmosphere, all while protecting the astronauts inside. A still from a dummy test is pictured

‘From launch to landing, Orion will be the safest spaceship in the world, returning humans to deep space and bringing them home safely,’ according to Lockheed Martin.

‘We’re pushing the envelope for crew safety – all in the name pioneering something never done before: sending people to Mars.’

The eye-opening video offers a glimpse at some of the extreme conditions astronauts will have to endure.

The first mission is set to launch in 2019, and while this will be uncrewed, the space agency has plans to send astronauts aboard Orion just a few years later.

‘The journey will not be easy,’ the video explains, as the crew will be subjected to lift-off vibration that will make it difficult to read their screens.

NASA and Lockheed Martin recently simulated this process, and clips from the test can be seen in the new footage.

Subjects in the simulation were fitted with advanced crew escape suits as they carried out tests to determine how well they could see the display and controls as the craft vibrated atop the Space Launch System rocket.

The footage also shows a look at the life-saving system that will activate within milliseconds of an emergency situation to steer the crew module away from danger.

At the beginning of 2017, NASA’s top staff was given instructions to assess the feasibility of sending humans to space with the first flight of the Space Launch System rocket and Orion spacecraft.

The mission was originally designed to be uncrewed, and was set to launch in 2018.

In a press conference, officials leading the study revealed the evaluations are now well underway, and they’ve already created a ‘hard, crisp list’ of everything that will need to change ‘from a hardware standpoint’ in order to add crew. 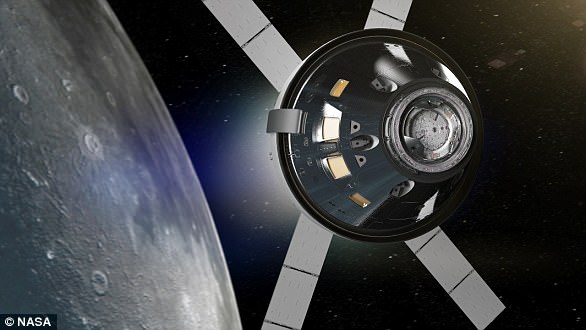 But, so far, the team says they’re sticking to their baseline plan for EM-1, and will let the ‘let the data drive’ any decisions moving forward.

It will see Nasa’s Orion, stacked on a Space Launch System rocket capable of lifting 70 metric tons will launch from a newly refurbished Kennedy Space Center.

And, the launch date has been pushed back to 2019.

‘If something goes wrong, the Launch Abort System will get astronauts to safety – fast,’ the video explains.

The space agency recently conducted tests on the system’s altitude control motor, which equipped with eight valves that, combined, can exert up to 7,000 pounds of steering force.

And, once they’ve traveled through space and are ready to come home, even that will be a difficult task, the video explains.

‘During re-entry, Orion will slow from over 20,000 miles per hour to 10 mph, with the help of parachutes,’ according to Lockheed Martin.

‘The journey finishes with a splashdown at sea.’

According to Lockheed Martin, they are so far ‘ahead of the game in terms of crew safety testing, in steps toward completing what’s set to be the world’s safest spacecraft.

HOW CREW WILL GET OUT AFTER ORION SPLASHES DOWN

NASA is developing multiple methods to get the crew out of the spacecraft on the day they return home.

Orion is designed to sustain a crew that has splashed down in the ocean for up to 24 hours.

It will be equipped with such a raft and a few additional emergency supplies such as water, tools and signaling mirrors, should the crew ever be in a situation where a team of recovery personnel is not immediately available to assist them 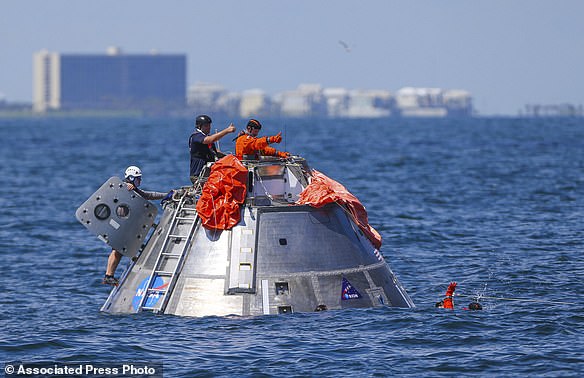 NASA recently practiced an emergency egress situation during recovery testing about four miles off of Texas. The testing is the first time since the Apollo program that NASA has practiced such egress techniques from a capsule in open water