Adorable images have shown exactly how an endangered baby black rhino gets to grips with the world, after the daily routine of a little ‘Apollo’ was documented by a rescue sanctuary in Africa.

Apollo is a critically endangered baby black rhino who came into the care of the Sheldrick Wildlife Trust, who swooped in to save him from the threat of poachers or larger wildlife predators.

His mother Amoy was found by rangers in the Tsavo West National Park, Kenya having died of naturally occurring Anthrax in September 2019.

Apollo is now being cared for at the Trust’s Kaluku Field HQ, close to the place of rescue, and will continue to be cared for until he is old enough to return to the wild in a protected area. 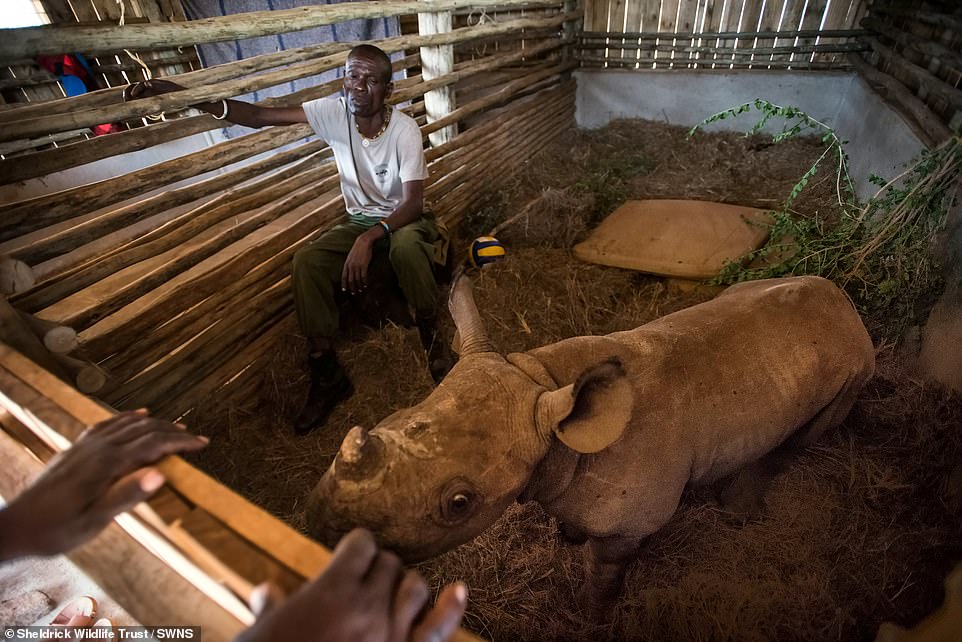 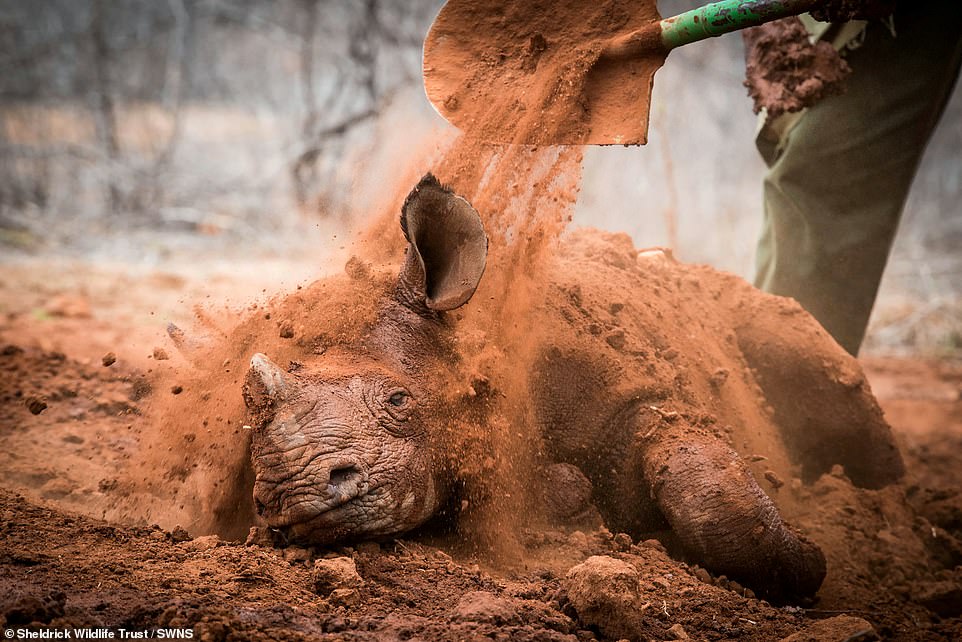 Apollo is given mud baths each day, in order to keep cool and help his skin stay soft and supple 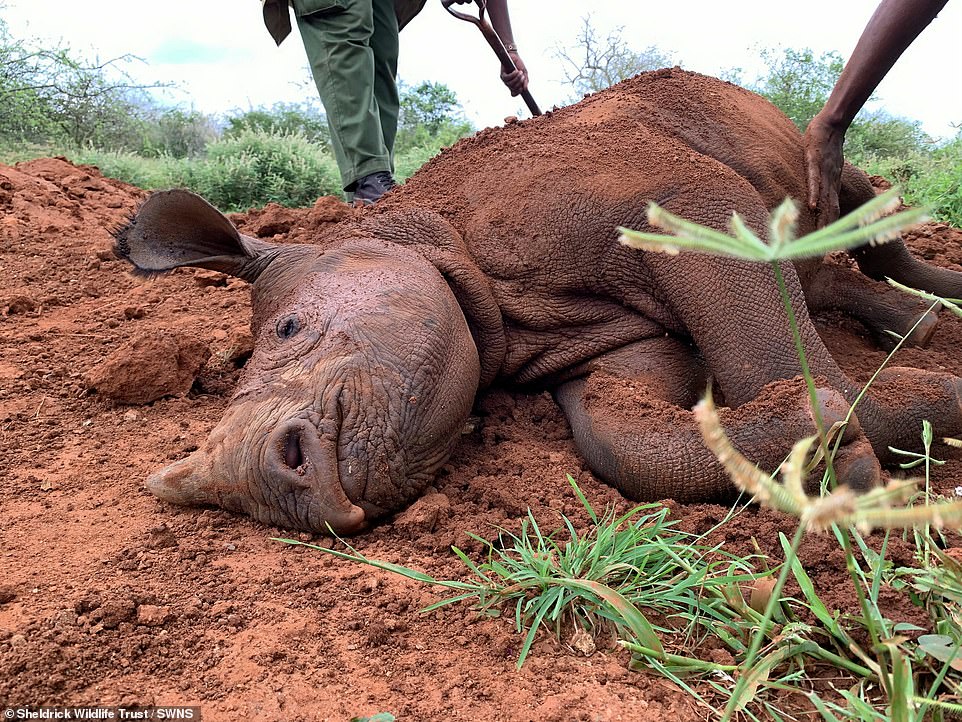 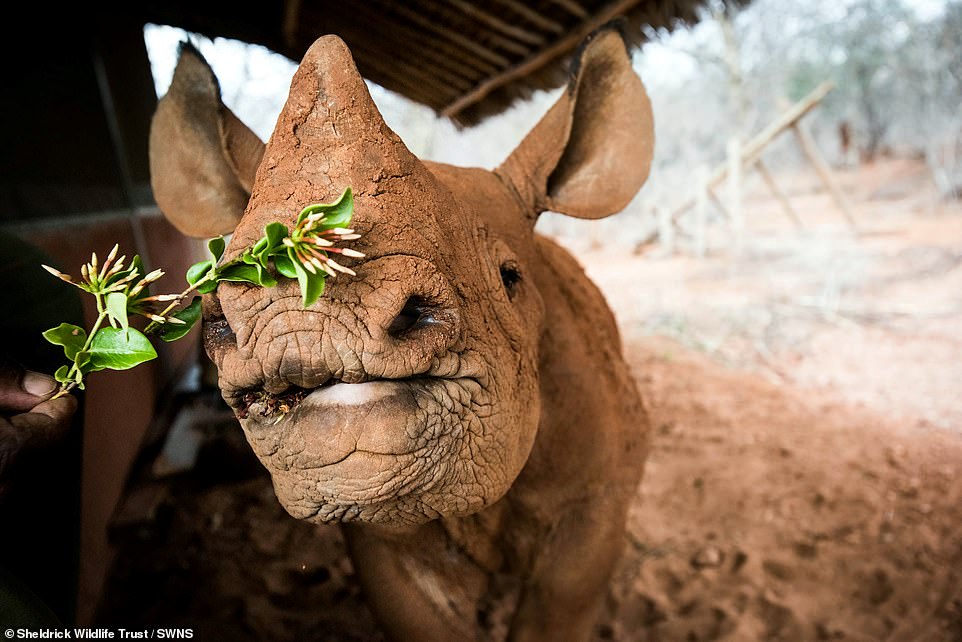 Apollo lives with Keepers who attend to his every need providing personalised mud baths and comforting horn rubs. The pint-sized animal is not short of love or affection and is fast learning about his wild environment during his daily ‘bush school’ wanders.

The Sheldrick Wildlife Trust has successfully hand-raised 17 orphaned rhino to date, and counting.

Rhinos are critically endangered as a result of hunting, as well as poaching for their horn, which is used in traditional medicine for its supposed health benefits. Yet since rhino horn is made of keratin, the same substance as found in fingernails, every life lost is a saddening waste and represents the loss of an individual that is vital to its ecosystem.

Rob Brandford, Executive Director of the Sheldrick Wildlife Trust said of Apollo’s upbringing: Typical of black rhinos, Apollo enjoys routine, familiar faces and known surroundings. Most mornings, he begins his days early, emerging from his custom built stable (which keeps him warm, cosy and secure from predators during the night) at six in the morning to mill around close to home after enjoying his morning milk feed. 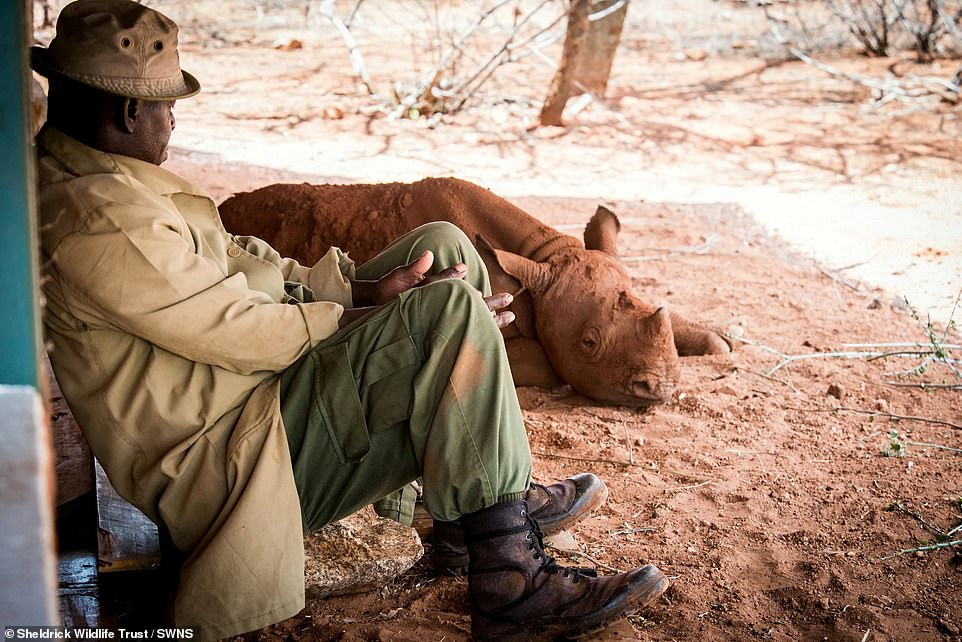 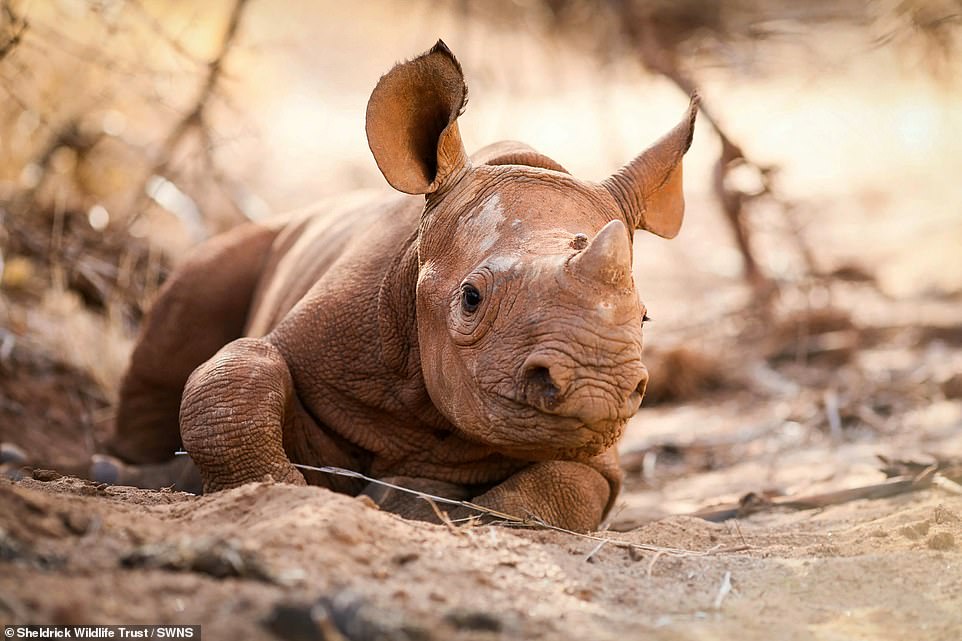 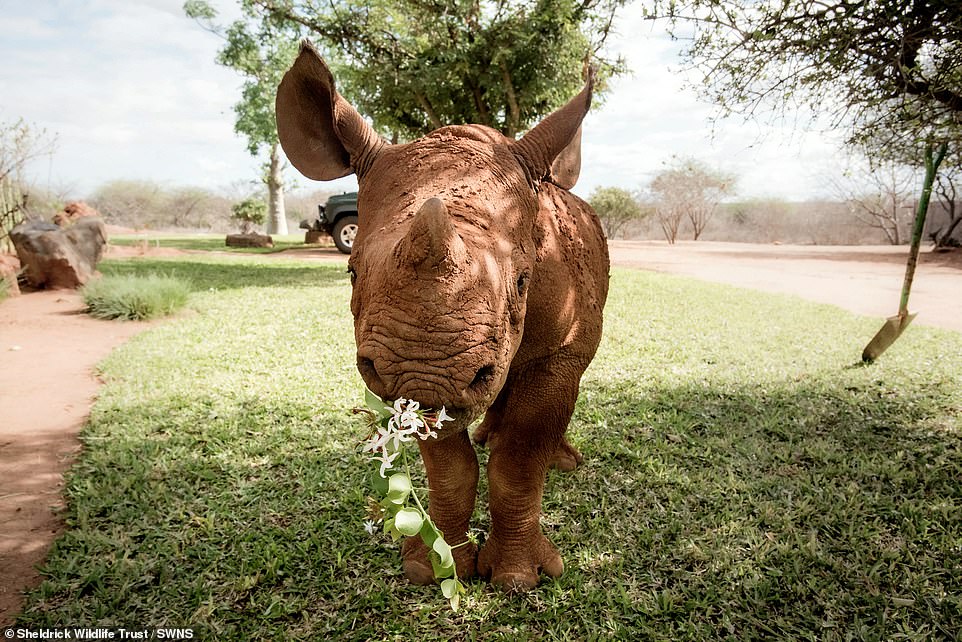 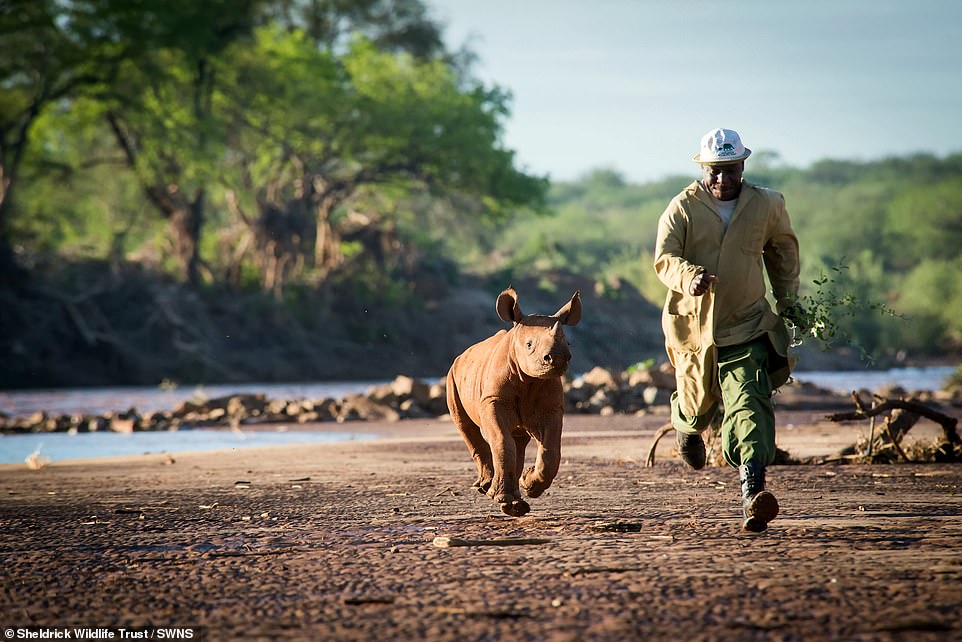 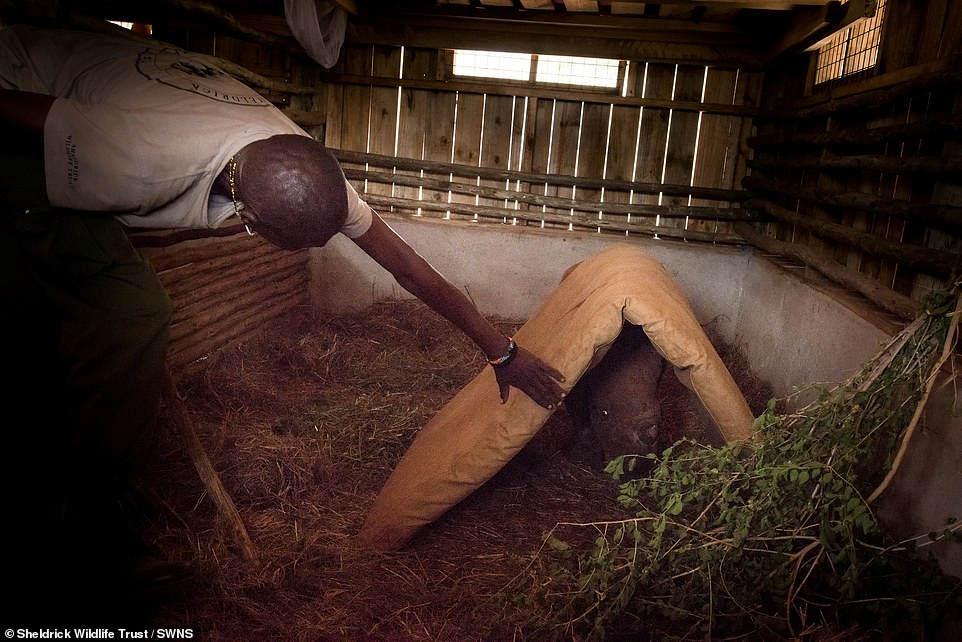 ‘Having been orphaned at the tender age of just six months, our Keepers now successfully fulfil the parental role and remain by Apollo’s side every waking (and sleeping) minute of every day.

‘Apollo is cared for a by a team of experienced rhino Keepers, who work in rotation to ensure Apollo doesn’t get used to any one carer should they go on annual leave. During his daily excursions, there are always two Keepers with him and most days they encounter a number of wild animals along the way, varying from elephants, to the tiny dik-dik.

‘His milk feeds are brought to him wherever he is in the bush and between milk feeds his diet is complemented by lavish amounts of greens, much of which he browses on himself, but tasty bits are collected by the Keepers and shared with him too.

‘Most of the action takes place early in the day and late in the afternoons; the times when the temperature is cooler and the energy levels are high. He loves to run along the sandy river bed – keeping up with him is no easy feat – as the hippos and other wildlife cast a lazy eye over this unusual sight. 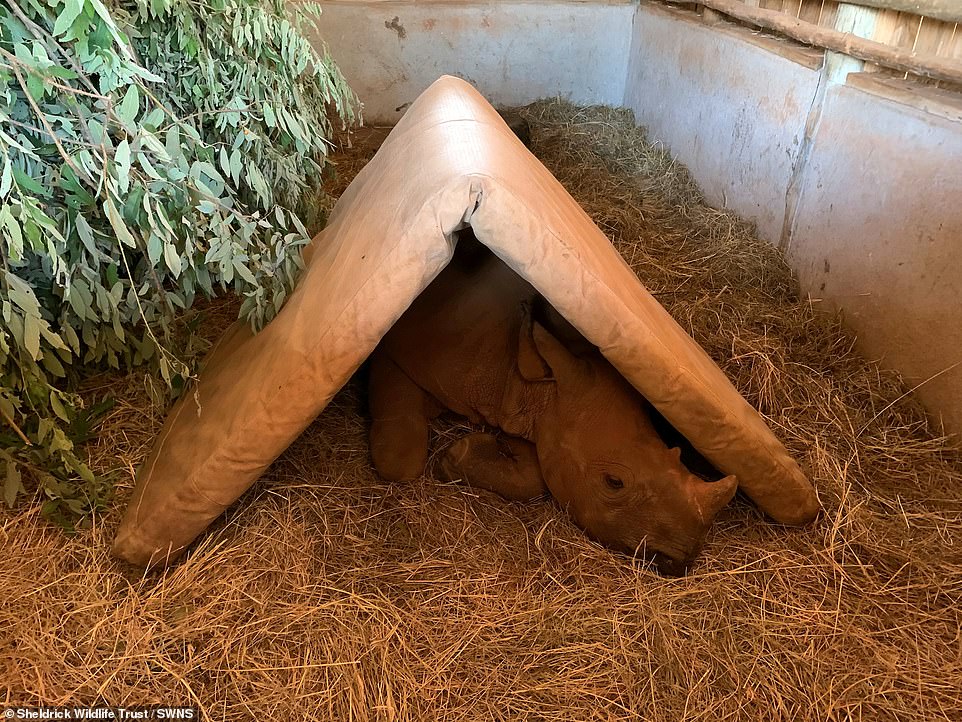 Most mornings, he begins his days early, emerging from his custom built stable at six o’clock and looking for a milk feed 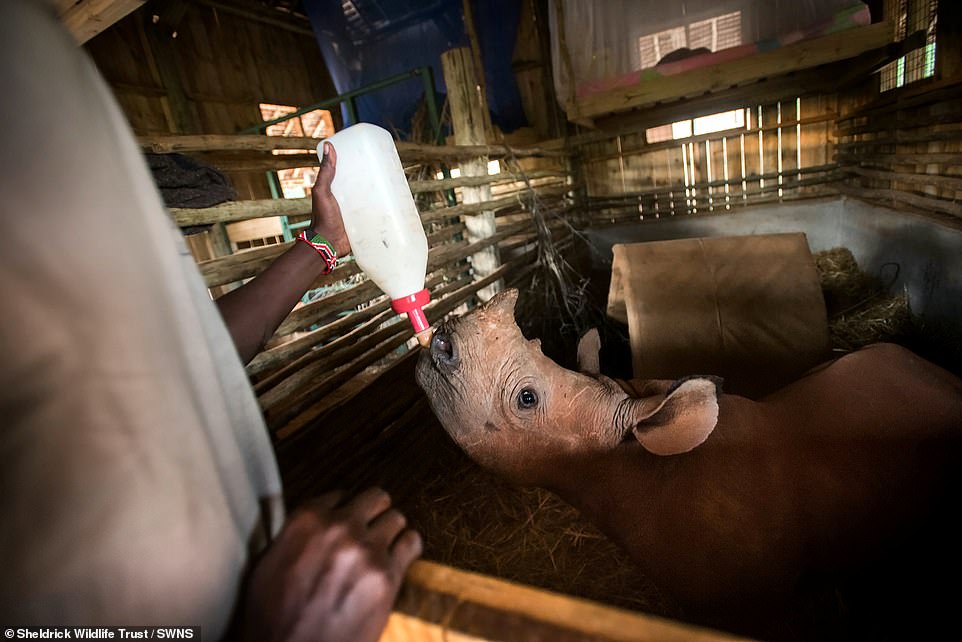 ‘Sand and mud baths are relished at all times of day, and tummy rubs never fail to lull him into a blissful stupor. Never are the mud baths more necessary than in the heat of the day when the sun scorches in hot Tsavo.

‘Rhinos may look like they have thick skin but it’s actually relatively sensitive and a lavish coat of red earth mud packed onto his skin not only helps keep him cool but also helps protect him from any irritating insects, and helps keep his skin condition soft and supple.’

‘As he’s only a baby, he takes lots of cat naps throughout the day, sleeping at his Keepers’ feet, comforted by their close proximity. His fondness for his Keepers is matched only by his love affair with his bedtime mattress, which he hoists up and over his head before settling down on a soft bed of hay for the night, creating his very own cosy fortress.

‘Thanks to donations from supporters across the world, we are privileged to be in a position to support Apollo through his milk-dependent years and, in time, help him return to his birthright: a life in the wild.’