A dreadlocked dog that was ‘one big mat’ when he was rescued from the streets has undergone a stunning transformation – and is now looking for a home.

The Shih Tzu mix named Rumor was found in a trucking yard in Houston, Texas, that has become known as the ‘Corridor of Cruelty’ because so many pets are dumped there.

The unloved pooch, aged eight or nine, was ‘in bad shape’ health-wise and covered in matted fur that swamped his tiny frame when he was taken in by Corridor Rescue, a shelter that patrols the impoverished Corridor area in the city.

Needing some TLC: A Shih Tzu mix named Rumor was covered in 1.2lbs of matted fur when he was found in a trucking yard in Houston, Texas, earlier this month 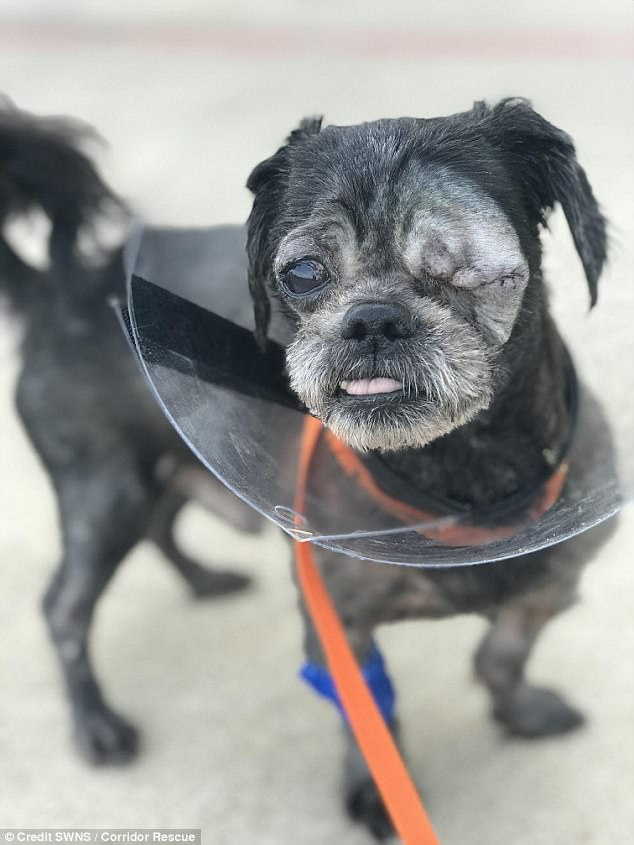 Transformation: Rumor had all of his matted hair sheared off and his damaged left eye removed during surgery this month

Beth Lovell, who is board chair of the rescue explained that Rumor was in dire need of help when he was found wandering around the Corridor.

‘There was no mistaking this pup needed off the street ASAP. Our street team member scooped him up and brought him to our kennel,’ she said.

He was so shaggy vets couldn’t see his eyes; they couldn’t even tell whether he was male or female.

‘Poor Rumor was one large mat. We did not even know until he was shaved what gender he was as the hair was matted around his genitals,’ Lovell said. 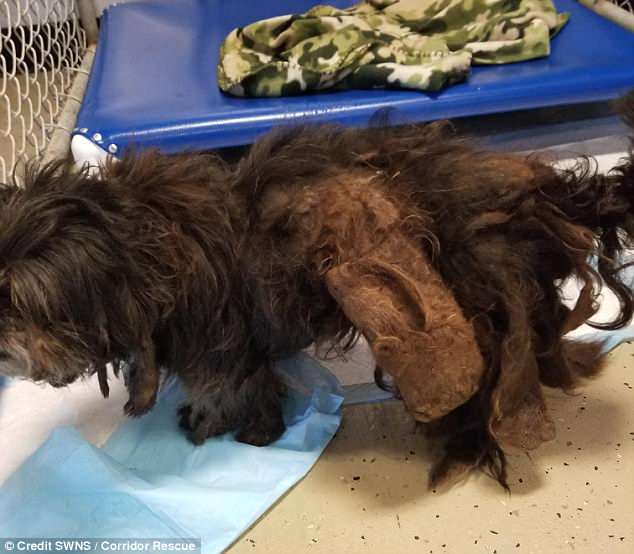 Shaggy as can be: The pooch was ‘one large mat’ when he was taken in by Corridor Rescue 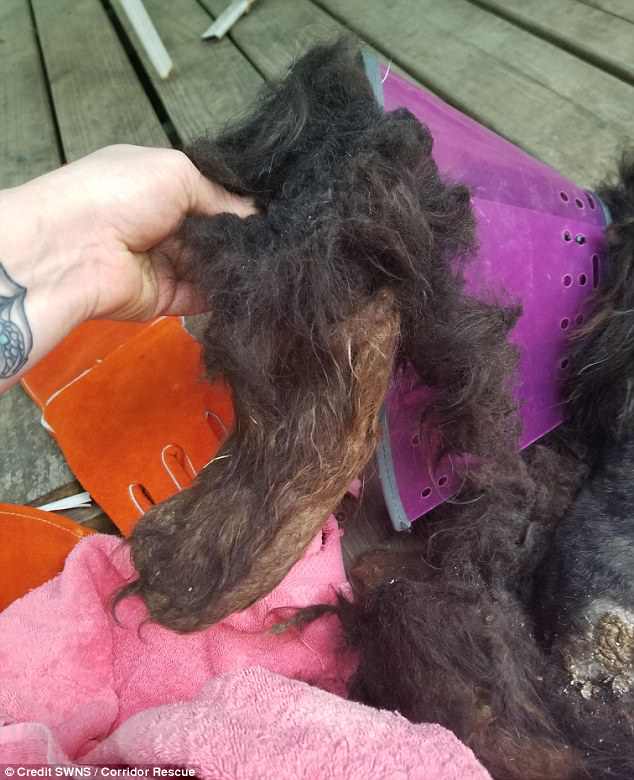 Heartbreaking: Technicians couldn’t tell Rumor’s gender because of the hair matted around his genitals 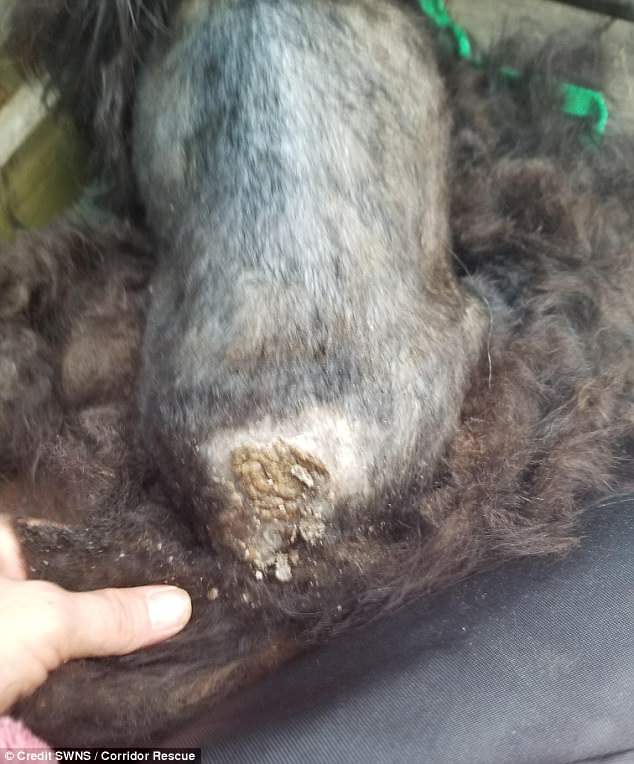 Poor pup: Mats can be painful for animals because they can cause sores under the skin

‘The poor guy had been urinating on himself due the mats. He had 1lb of matted hair attached to his small body.

Lovell explained that mats can be ‘very painful’ for animals because they become very heavy and pull on the skin.

‘They can also cause sores under the skin as it can not breathe and collects dirt and moisture under it,’ she added.

‘He was in bad shape and he was unhappy, probably because he felt so terrible in the condition he was in.’ 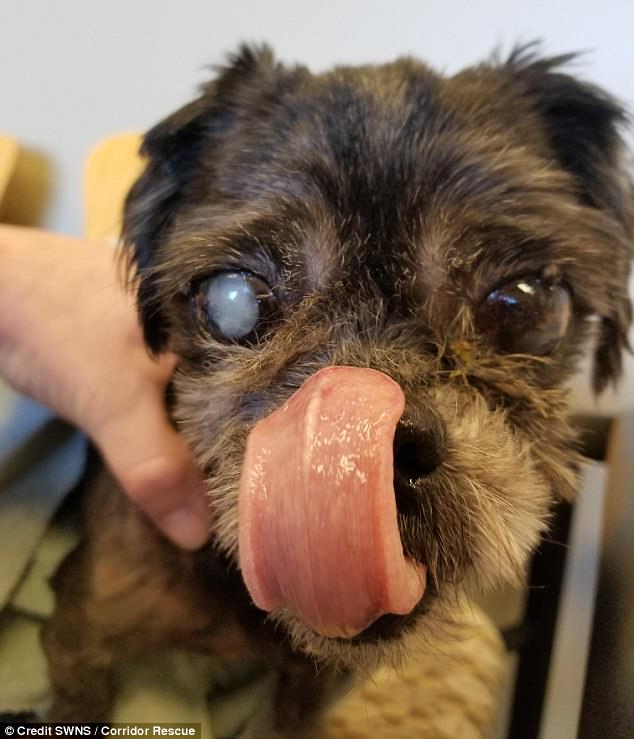 Rescue: The pup also underwent surgery to remove his left eye, which was damaged due to trauma caused by an ulcer, and to remove a cataract from his right eye 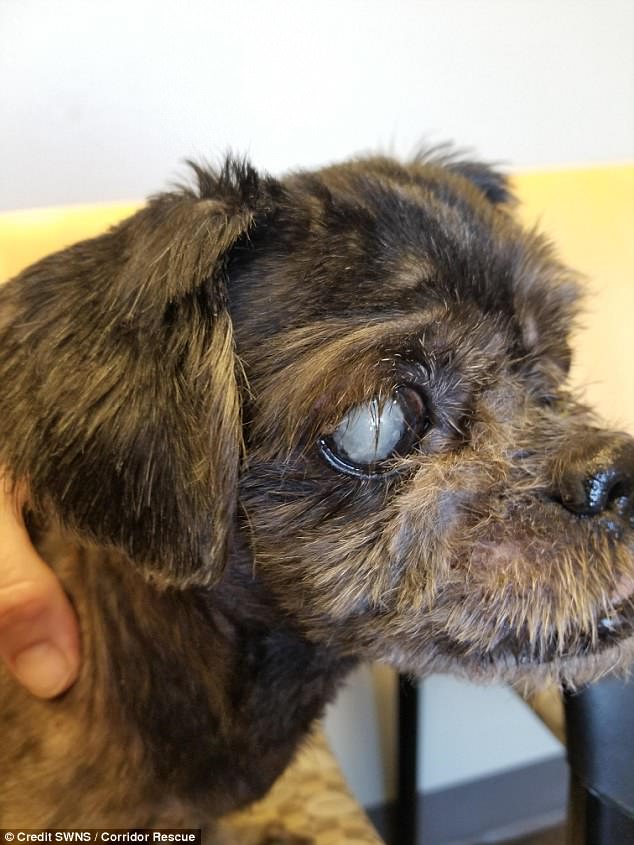 Looking for love: Corridor Rescue is now searching for a home for Rumor to move into

The pup also underwent surgery to remove his left eye, which was damaged due to trauma caused by an ulcer, and to remove a cataract from his right eye.

Incredible before-and-after photos show Rumor’s dramatic transformation and the pooch, who went through surgery ‘like a champ,’ is on the road to recovery.

Corridor Rescue is now searching for a home for Rumor to move into when he is medically cleared.