The 91st Academy Awards kicked off on Sunday at the Kodak Theater in Hollywood.

And one of the first stars who hit the carpet for the annual awards show was Ashley Graham, who stunned in a black strapless mermaid gown with diamond jewelry.

The 31-year-old model was an absolute vision in her form-fitting look, opting to style her brunette tresses into a tight bun with matte nude lipstick.

It might be the gold standard of award shows, but with falling viewing figures, The Academy Of Motion Pictures Arts and Sciences have made some major changes for this year’s Oscars ceremony.

These range from skipping a host – after Kevin Hart stepped down – to recruiting ‘highly recognized talent from various walks of life’ to present the eight nominees for Best Picture, a role usually reserved for actors.

Those talents include anti-Trump chef and restaurateur Jose Andres, Daily Show host Trevor Noah and civil rights leader and Georgia congressman John Lewis and the woman who many consider to be the greatest athlete of all time, Serena Williams.

It is not clear which of the nominated films will be presented by these new presenters, who also include: Dana Carvey, Queen Latifah, Tom Morello, and Amandla Stenberg.

Va va voom: The model, 31, pulled her tresses back into a center parted bun with matte nude lipstick on her full pout 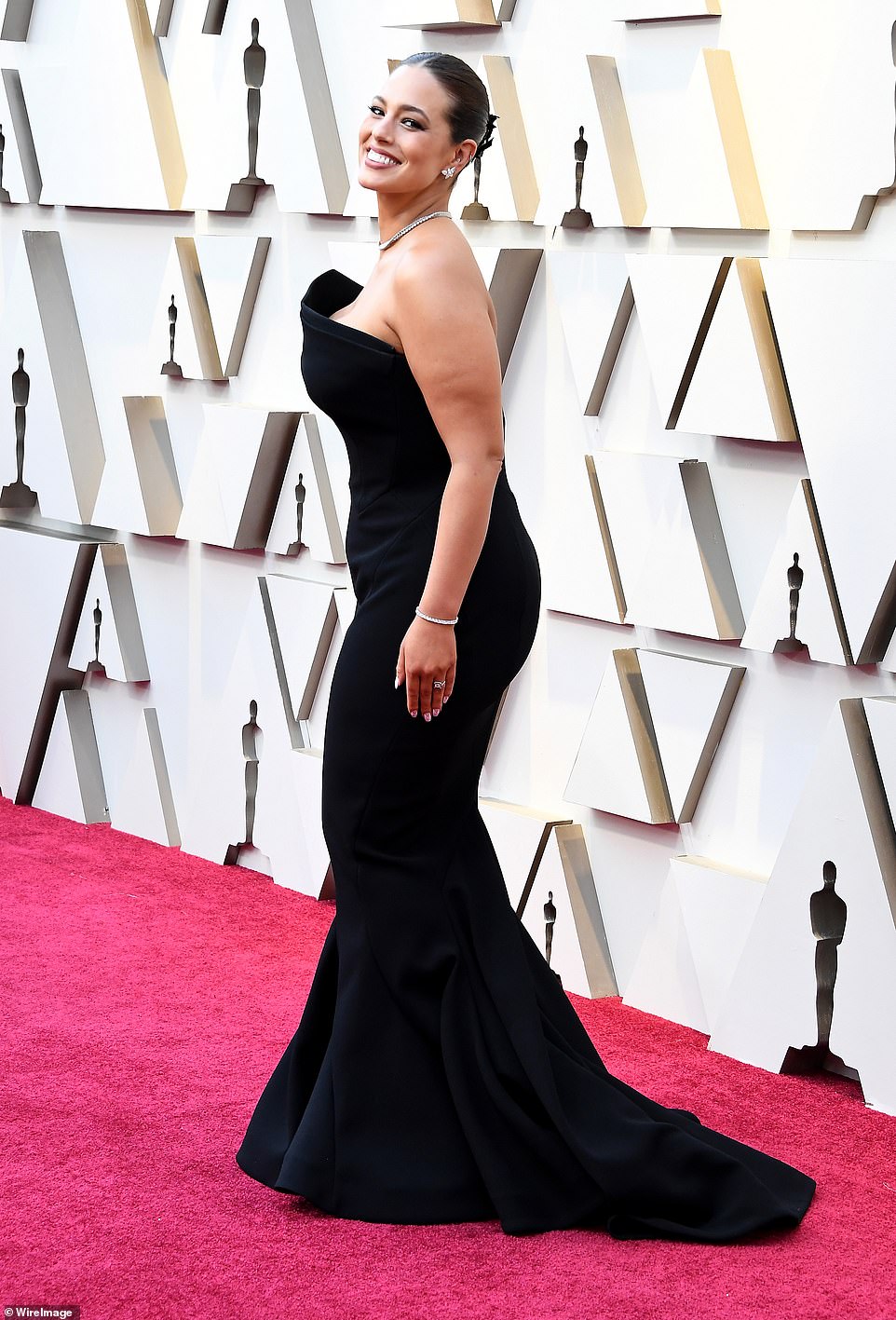 Stunner: Ashley grinned ear to ear as she hit the carpet on Sunday afternoon

The final three presenters, Barbra Streisand, Diego Luna and Mike Meyers, will almost certainly be introducing the to films with which they have close ties: A Star is Born, Roma and Bohemian Rhapsody.

It began with the announcement that the Best Song nominees would not be featured in the telecast, a decision that was changed following public uproar. 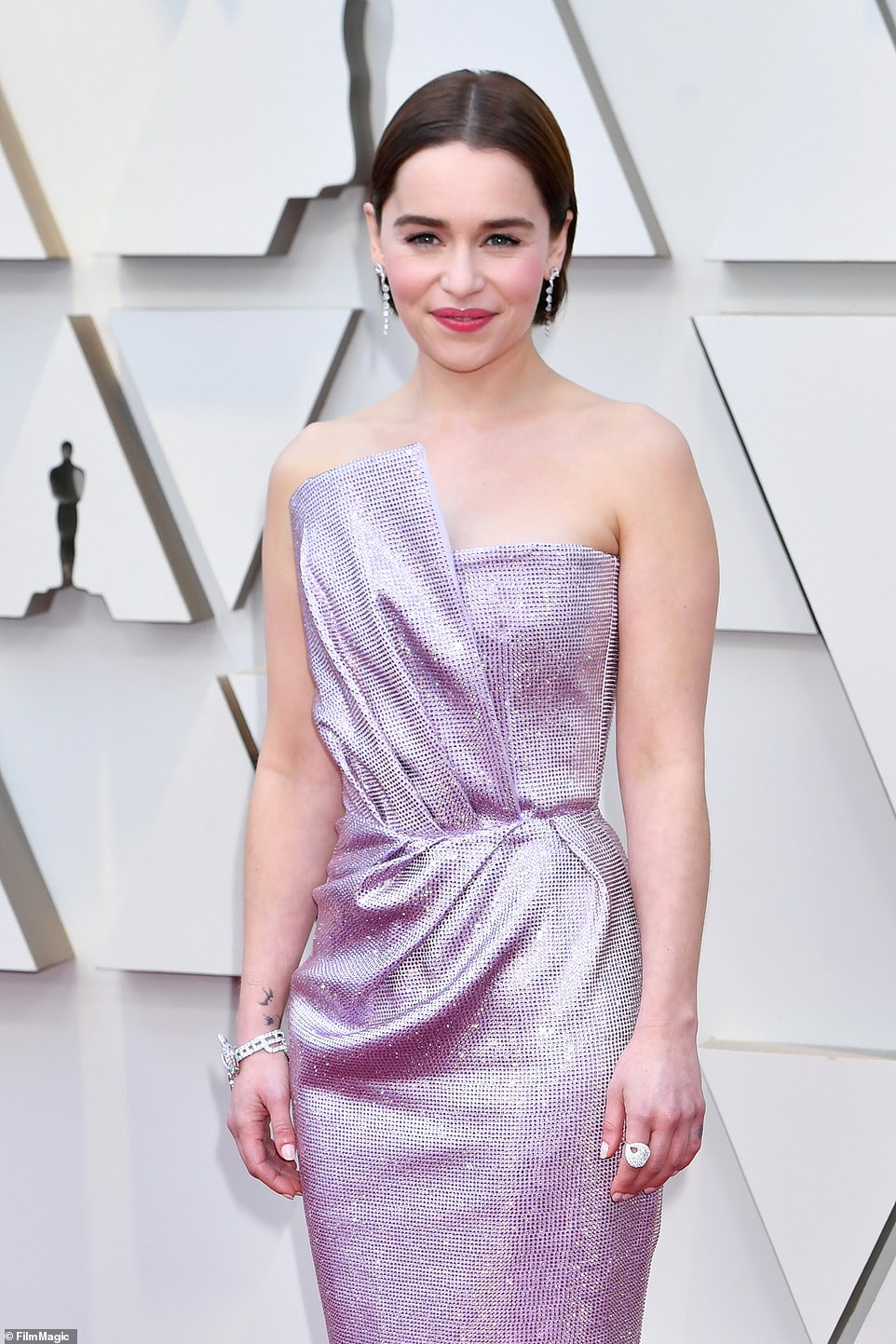 A vision: Emilia, who stars on Game Of Thrones, wore a large diamond bracelet with a matching ring and earrings

Next was the decision to discontinue the trend of having the actors who won in each category last year present at the ceremony.

That was revealed by Allison Janney, whose appearance presenting alongside Sam Rockwell at the Golden Globes last month proved to be one of the rare highlights of the unremarkable telecast.

Uproar ensured, and the Academy soon announced that the tradition would continue.

Next, the Academy opted to eliminate four categories from the telecast – Cinematography, Film Editing, Live Action Short, and Makeup and Hairstyling – and present those awards during the commercial break. 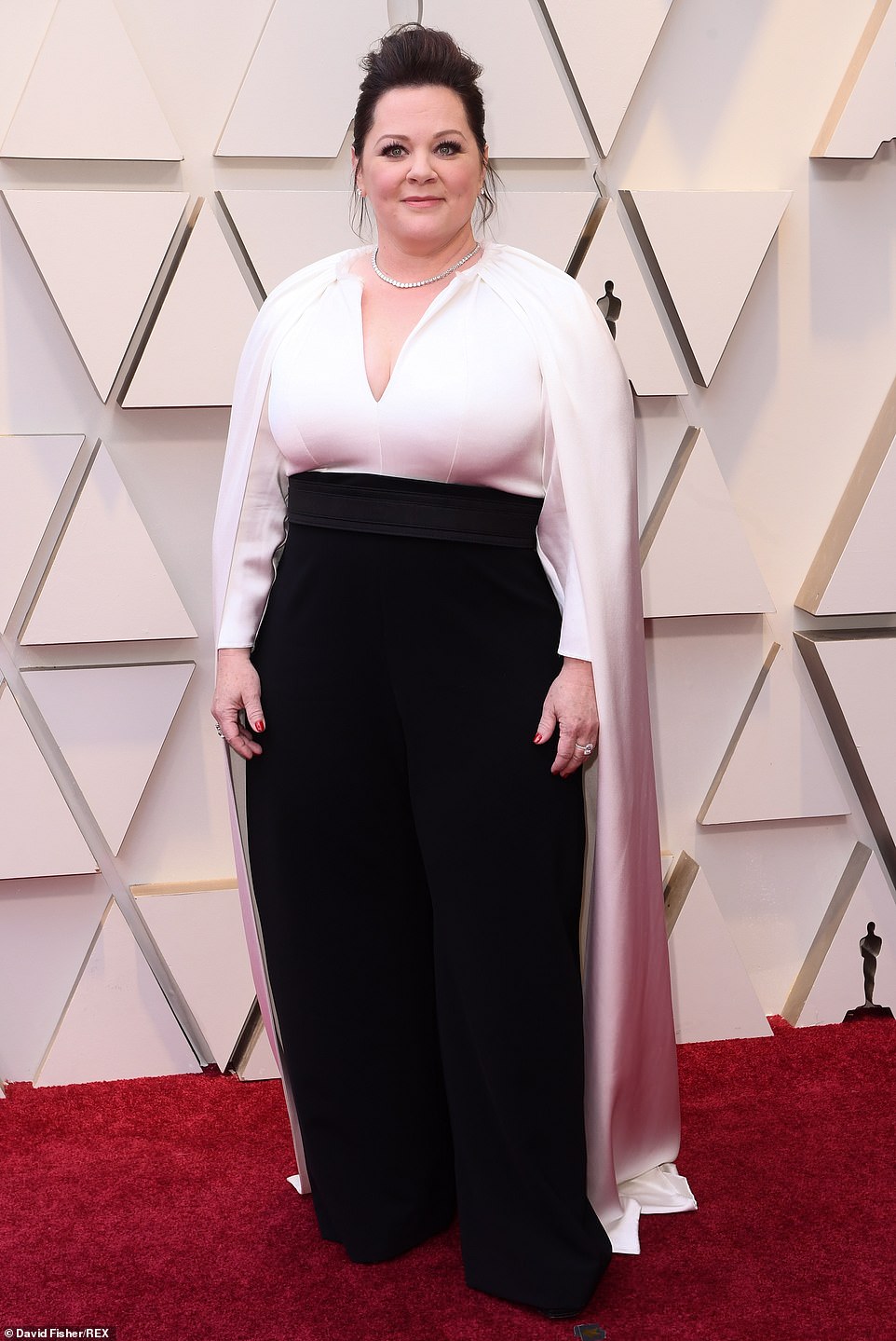 Fancy: Melissa McCarthy looked incredible in her black and white jumpsuit with a cape detail 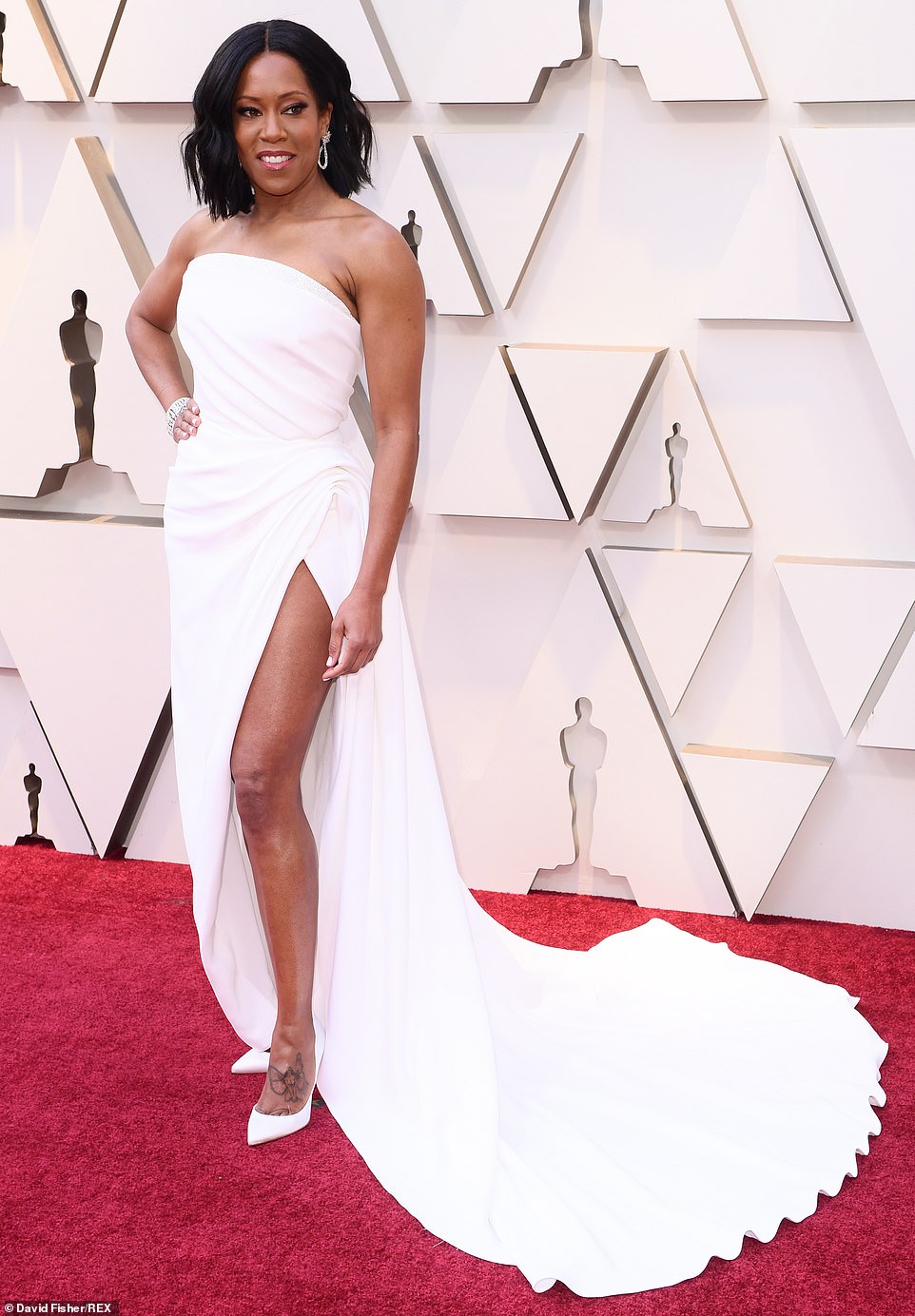 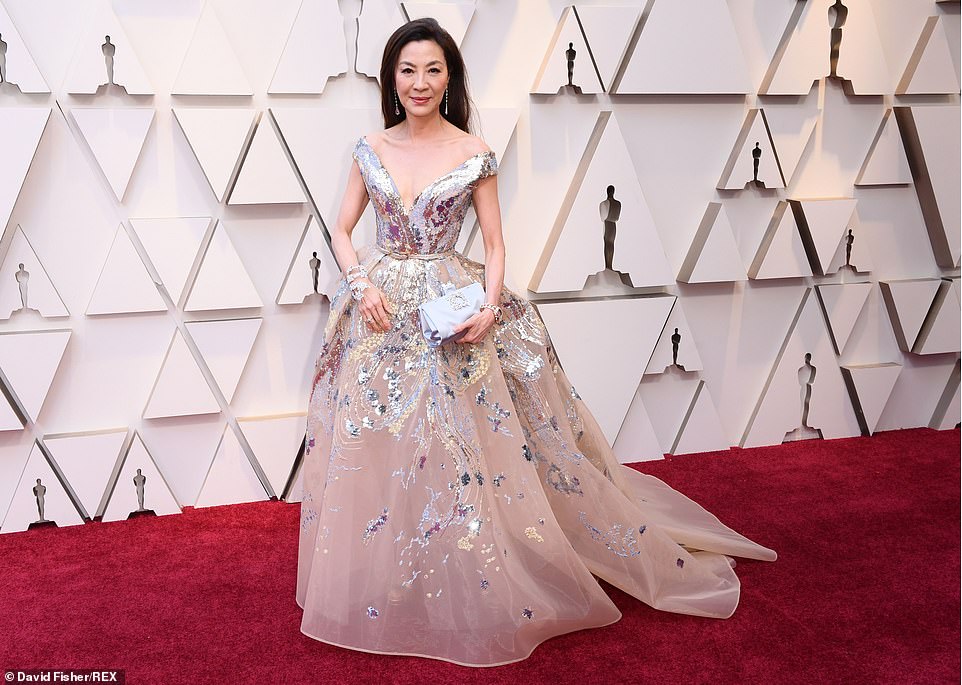 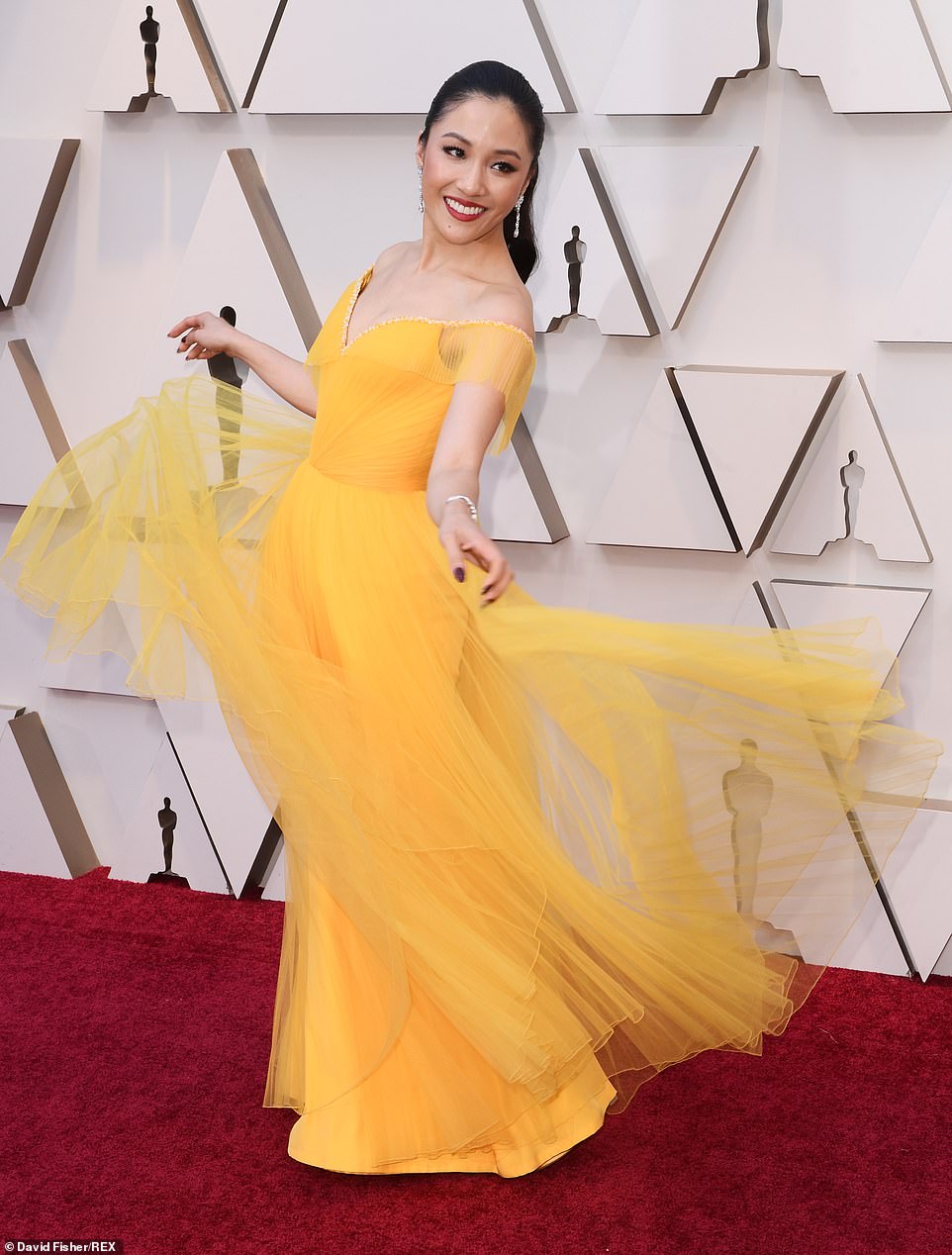 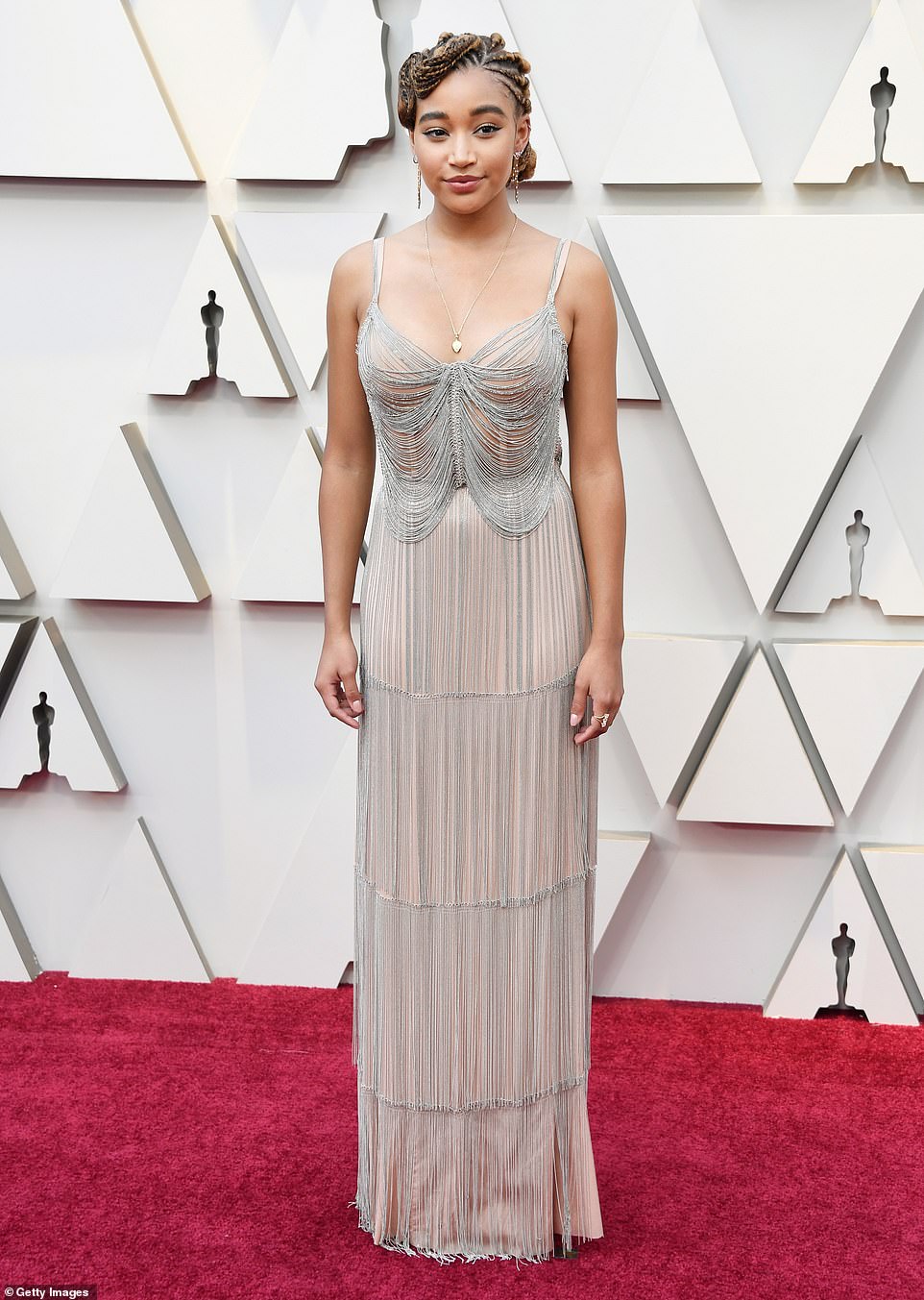 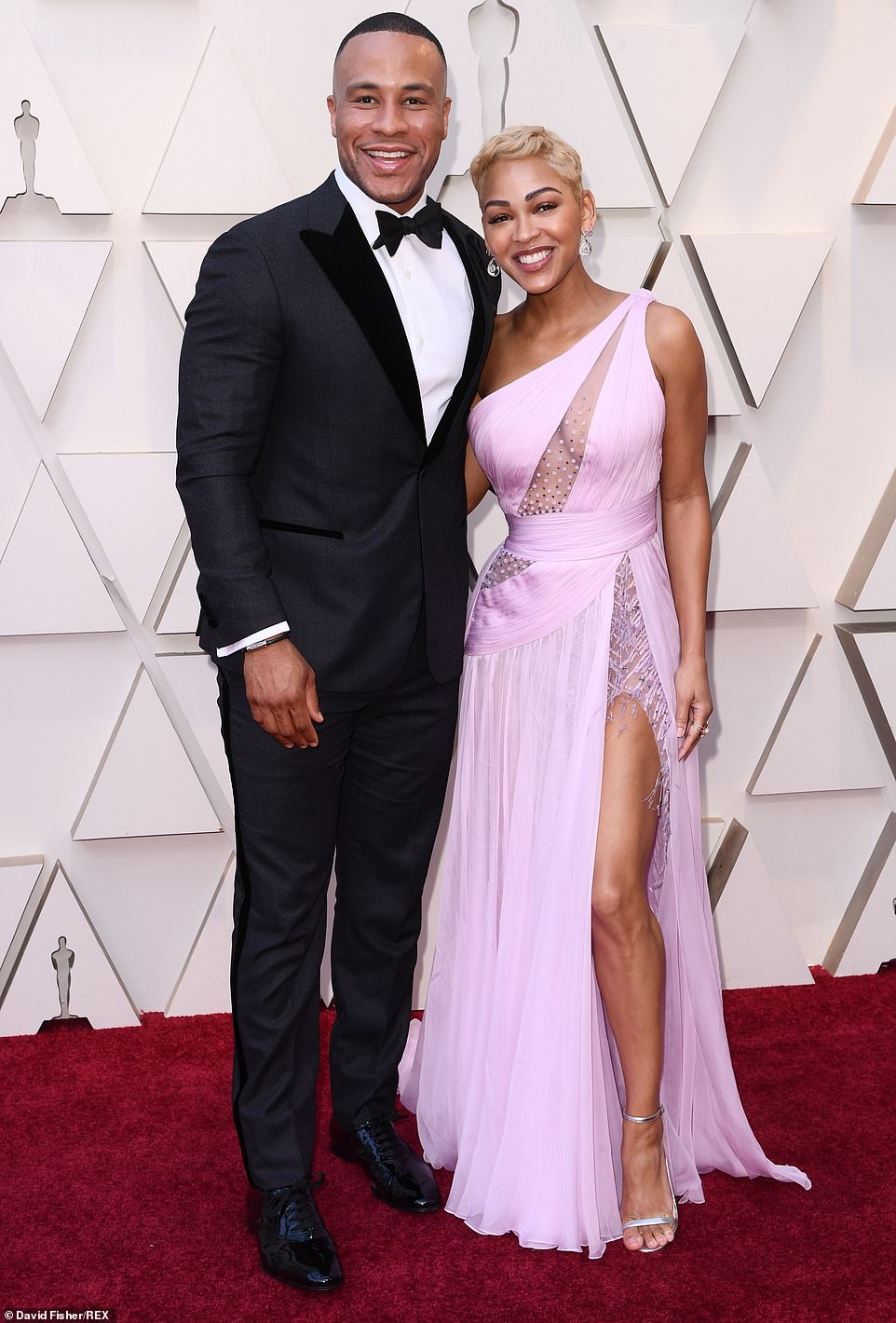 Lovely: Meagan Goode arrived with her husband DeVon Franklin; they tied the knot in 2012 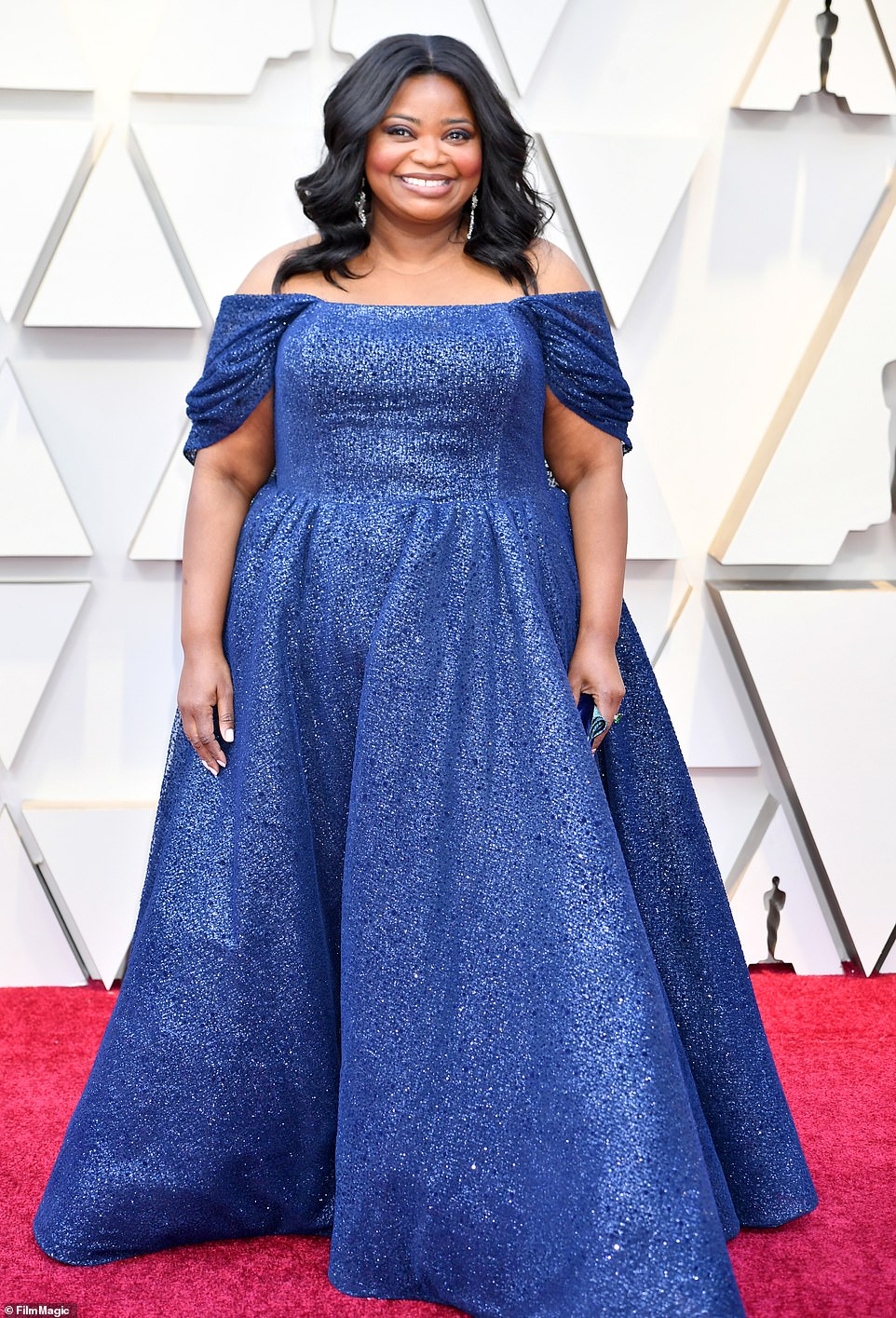 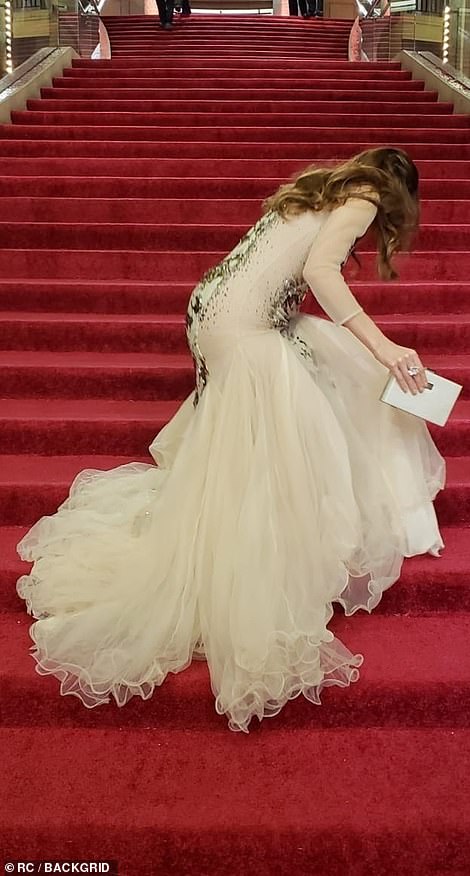 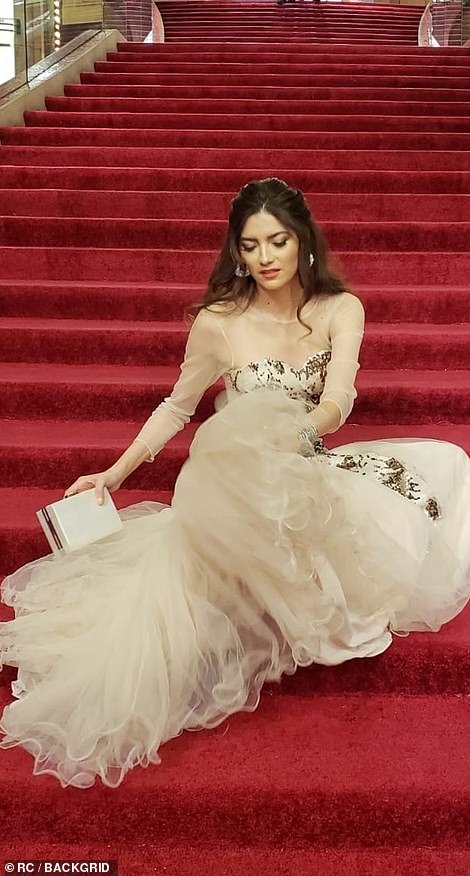 A lady: Blanca Blanco appeared to have a minor mishap when she tripped on the step; the actress looked gorgeous in her elaborately designed frock with sheer paneling and gold embellishments 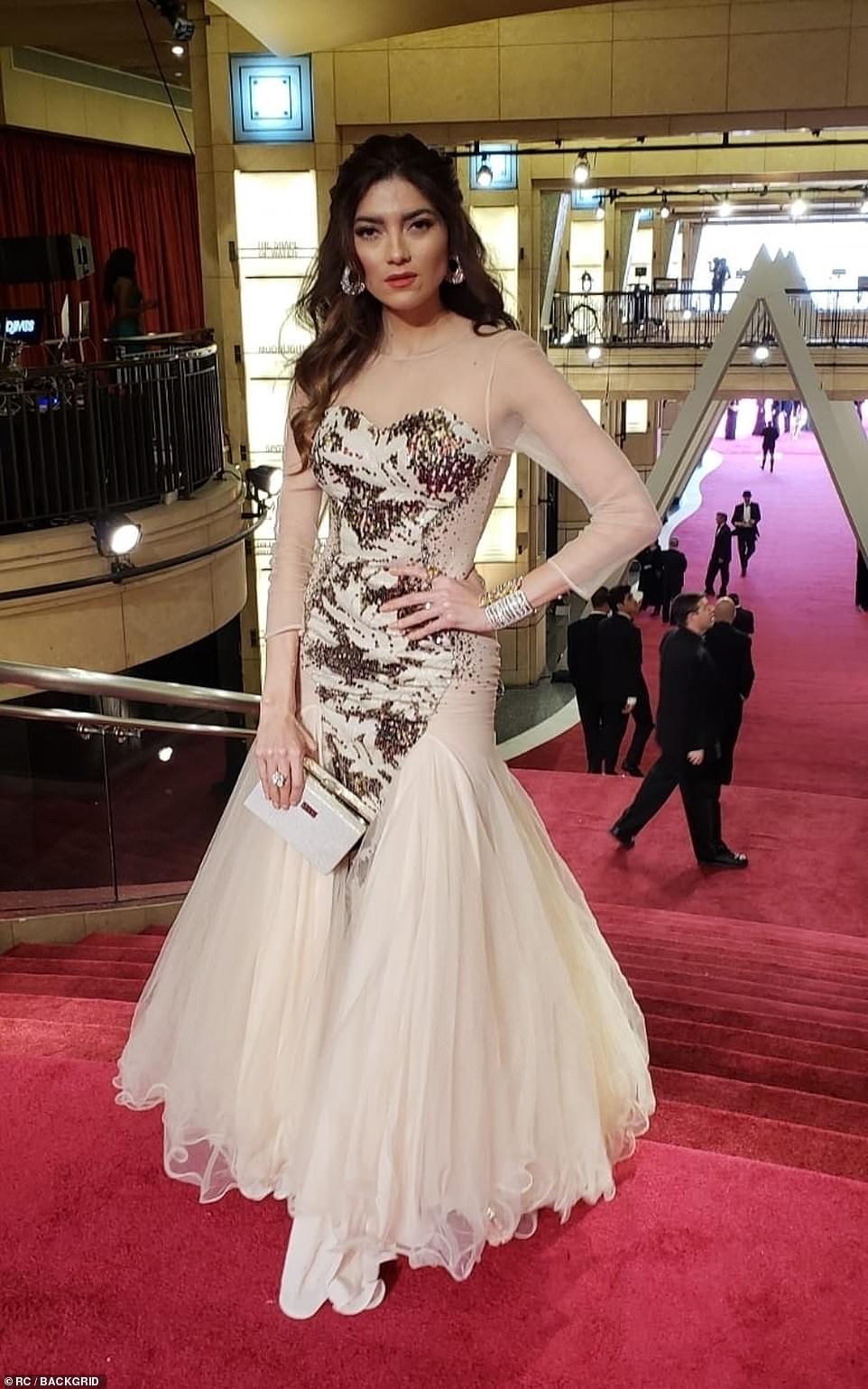 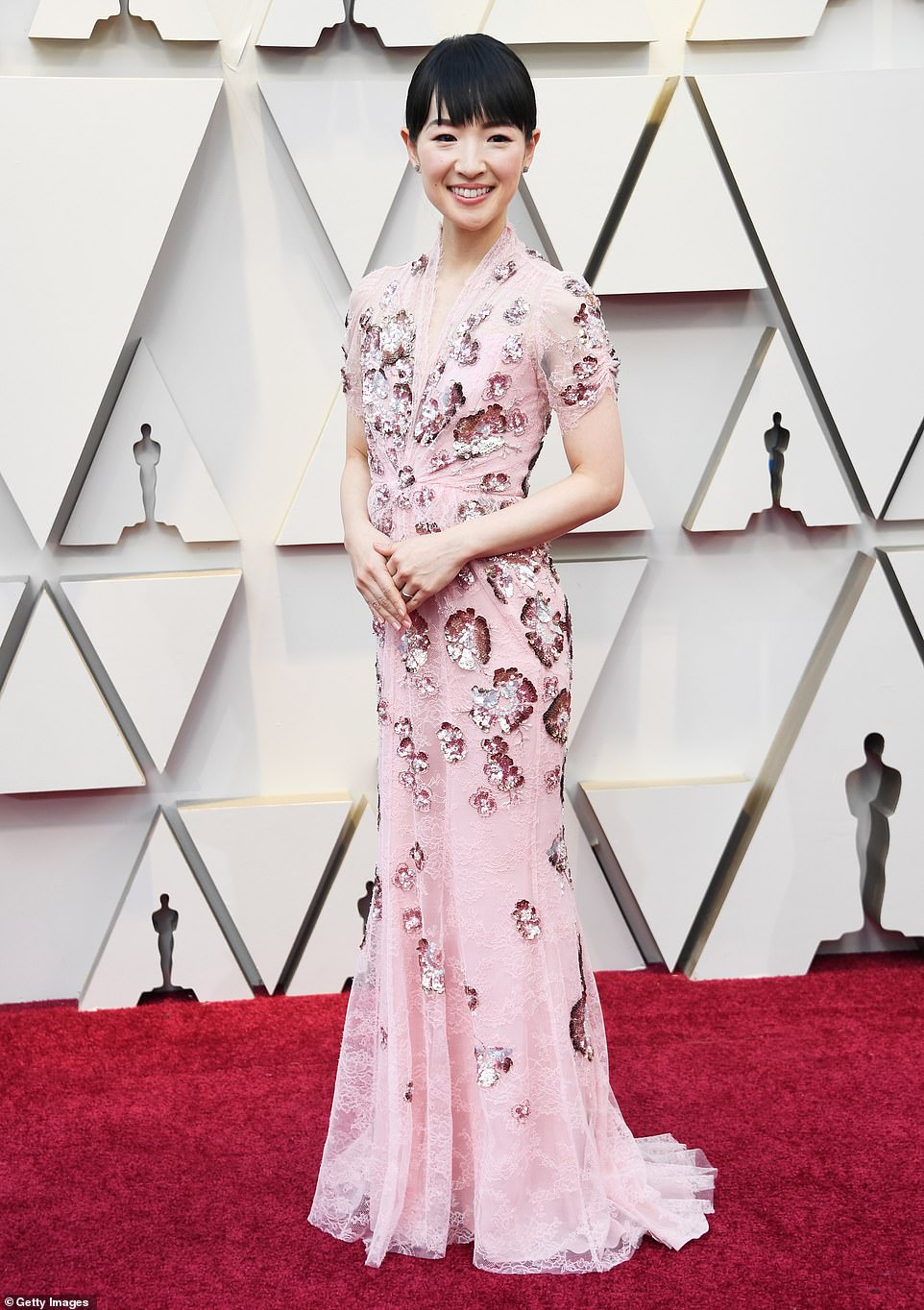 Glittering: Marie Kondo, who penned the best-selling book The Life-Changing Magic Of Tidying Up: The Japanese Art of Decluttering And Organizing

That managed to draw the ire of many members of the Academy, and was protested in an open letter signed by the likes of Glenn Close, Robert DeNiro, Kerry Washington, Brad Pitt, Halle Berry and hundreds more.

It is unclear what other surprises producers may have up their sleeves with just a few days left between now and the 91st Academy Awards ceremony, which will air on ABC this Sunday. 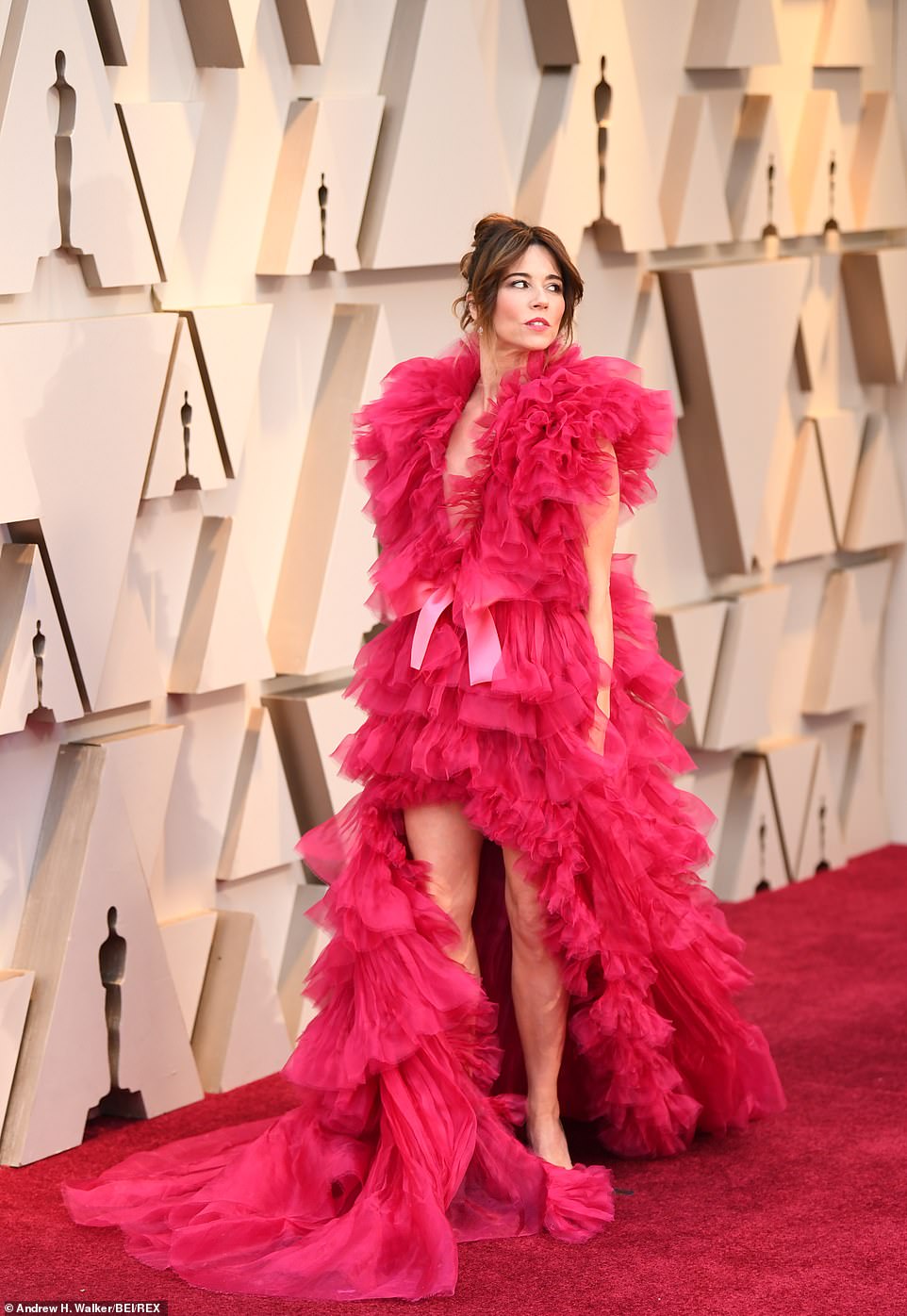 A statement: Linda Cardellini chose an eye-catching red dress with ruffled detailing all over 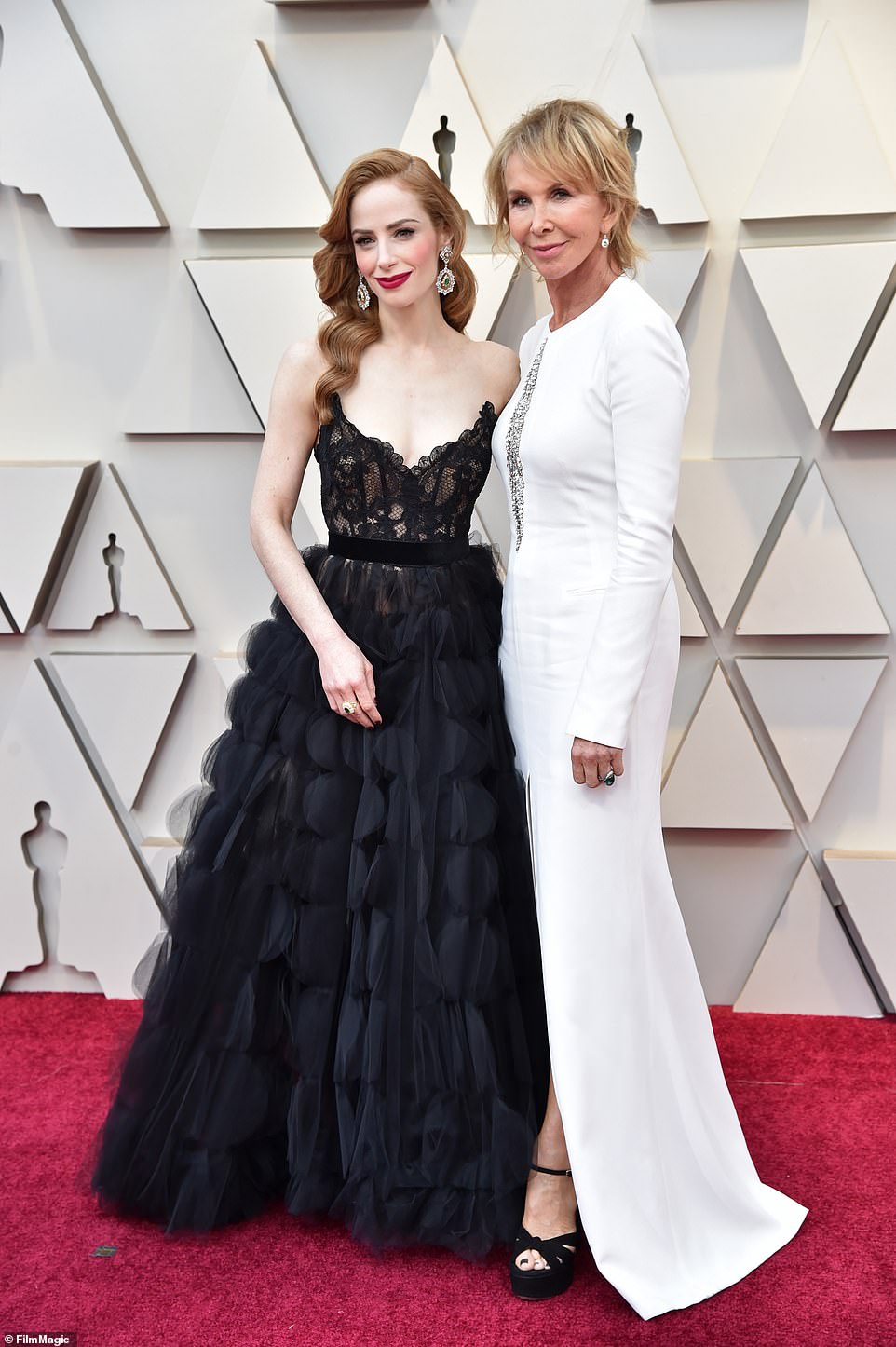 They are pals: Trudie Styler (R) looked slender in white as she posed with Jaime Ray Newman, who donned a black lace look 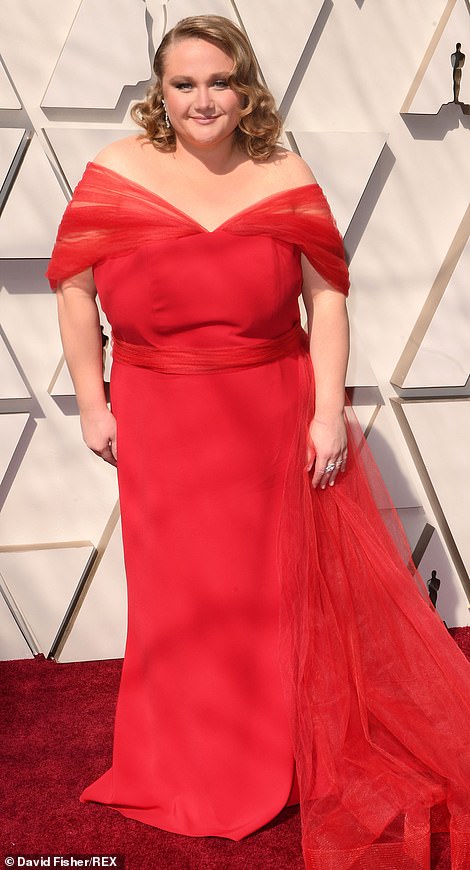 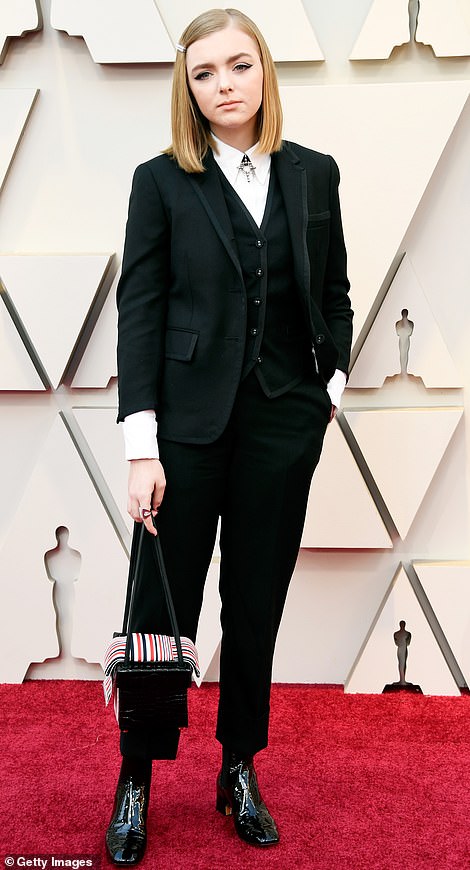 A black and red situation: Danielle McDonald stunned in a fancy red gown that no one could miss. Elsie Fisher had on a three-piece black suit with black boots and a boxy purse

One of the first stars to hit the red carpet was Kristin Cavallari, the former cast member of TV’s The Hills turned Uncommon James jewelry designer.

The beauty looked elegant in a black dress by Burnett New York as she was hosting for E!’s Live From The Red Carpet.

Like a Disney princess: She turned heads in a long, ballroom gown in bright yellow and white which looked like a modern version of something Belle from Beauty And The Beast would wear 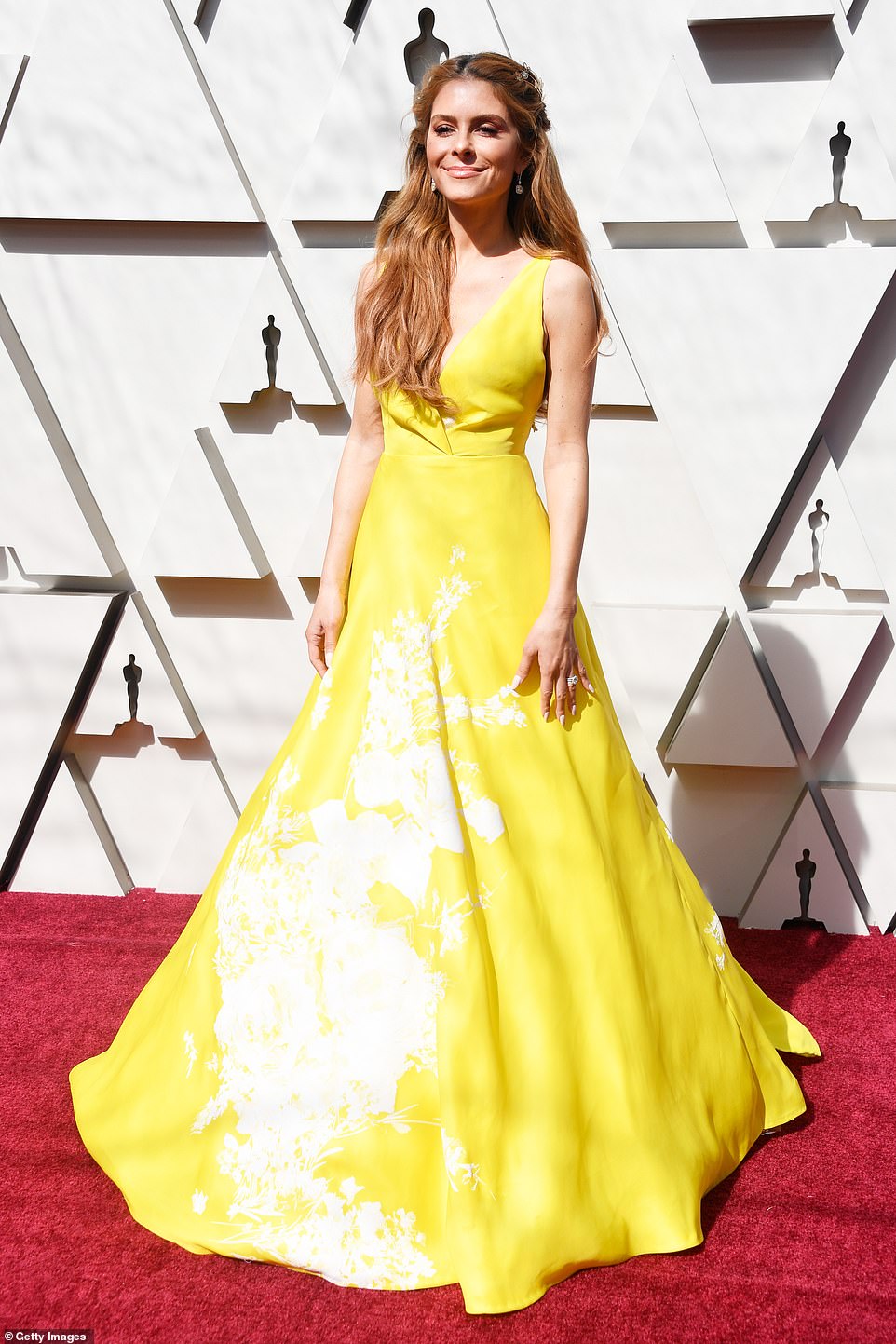 Bright idea: Also on the carpet was Maria Menounos, who is working for ABC’s pre show 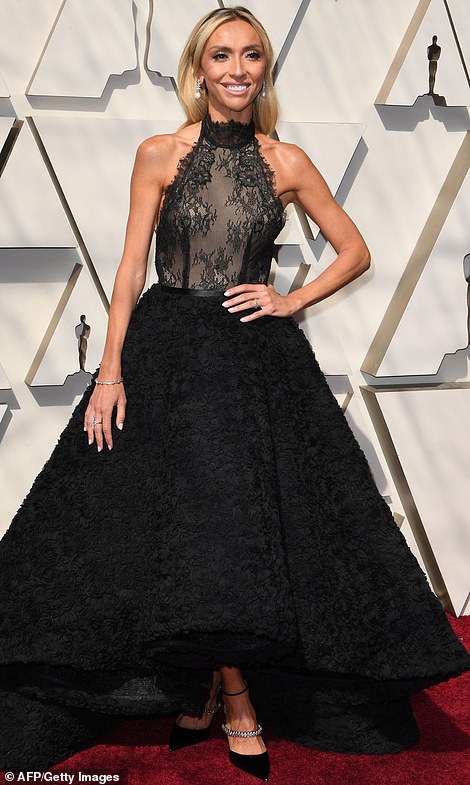 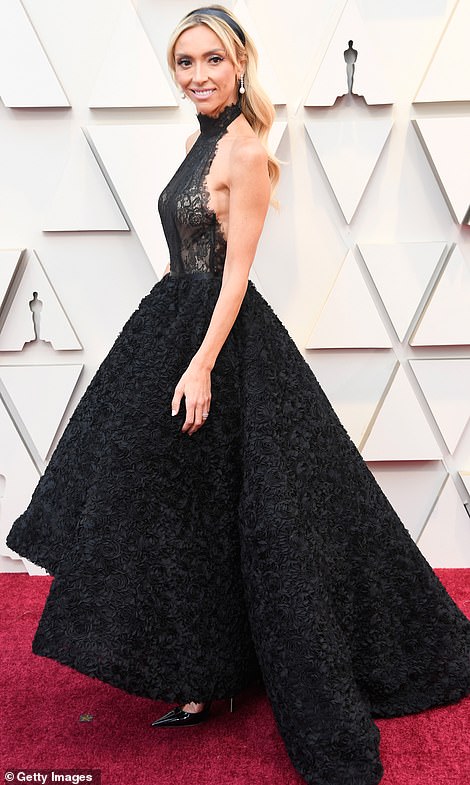 A polished loo for this vet: Giuliana Rancic had on a black gown with a sheer lace halter top and a ballgown skirt with pointy heels. Her hair was secured by a black headband and she had on long pearl drop earrings 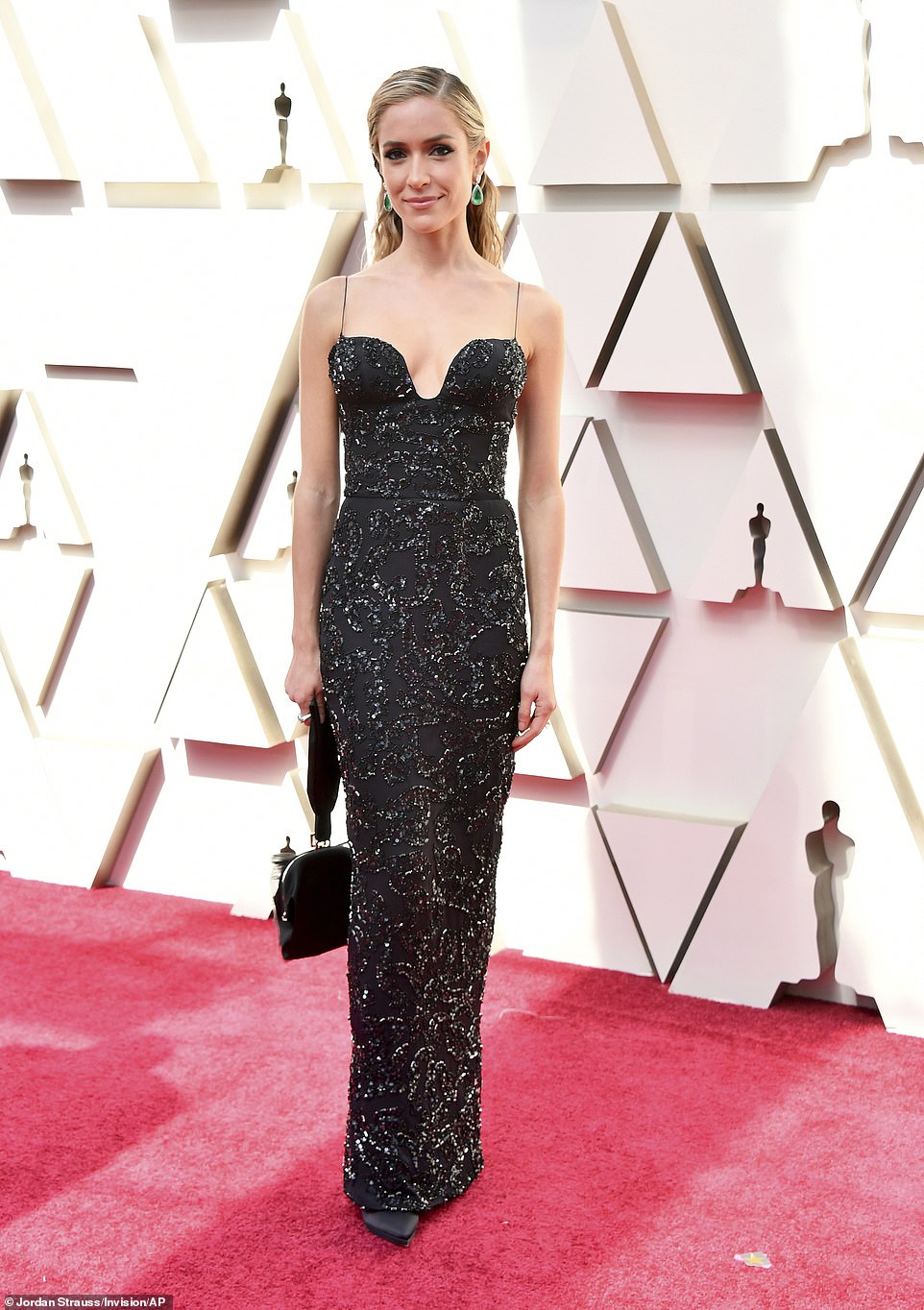 Classic look: The 91st Academy Awards will take place on Sunday at the Kodak Theater in Hollywood. And one of the first stars to hit the red carpet was Kristin Cavallari, the former cast member of TV’s The Hills turned Uncommon James jewelry designer

She turned heads in a long, ballroom gown in bright yellow and white which looked like a modern version of something Belle from Beauty And The Beast would wear.

The star let her highlighted hair flow down over her chest as she posed away.

Renee Bargh had on a long gown with tulle over satin that looked like it was made for her.

The neckline was plunging with gathered tulle around the neck. Her dress was so long her shoes could not be seen.

The star added diamond rings and had a deep purple manicure.

So feminine and pretty: Renee Bargh had on a long gown with tulle over satin that looked like it was made for her. Laura Marano, right, skillfully pulled off a yellow and pink dress with a candy apple green clutch purse 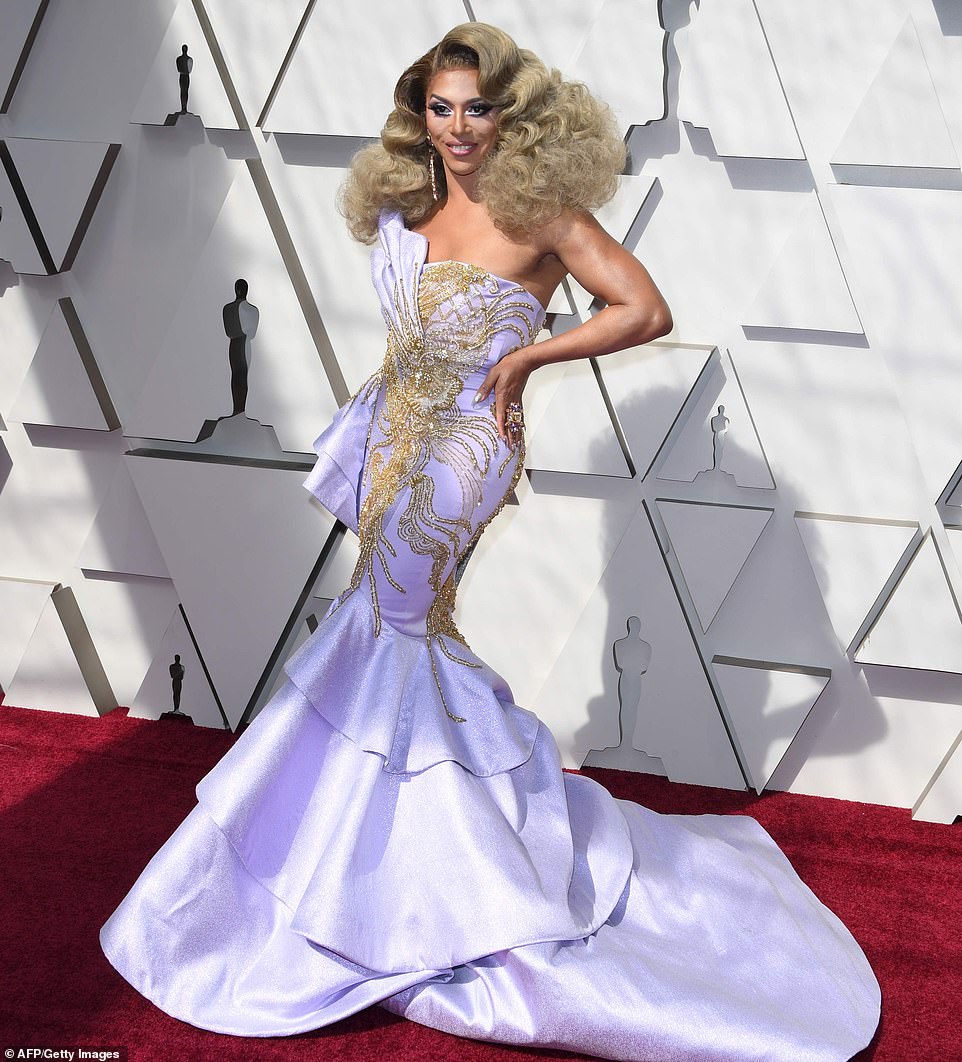 Purple passion: Shangela Laquifa Wadley, born Darius Jeremy Pierce and often mononymously addressed as Shangela, wore a lovely lilac colored gown that had a bit of a train and tiers

Producers Donna Gigliotti and Glenn Weiss have pledged that the show will be speedier this year , even though its initial goal of a three-hour broadcast has faded. Kicking things off will be a performance by Queen, featuring Adam Lambert, to celebrate the best picture-nominee Bohemian Rhapsody.

In the academy’s favor is a popular crop of nominees: Bohemian Rhapsody, A Star Is Born and, most of all, Black Panther have all amassed huge sums in ticket sales. Typically, when there are box-office hits (like Titanic), more people watch the Oscars.

But just how many people have seen one of the top nominees and the film favored to win best picture — Alfonso Cuaron’s Roma — remains unknown. Netflix has declined to give box-office results or steaming viewership. It remains a nominee unlike any other. Should Roma — a black-and-white, Spanish and Mixtec language film about a domestic worker in a Mexican family — win, it will be both the first Netflix movie to win best picture and the first foreign language film to do so. 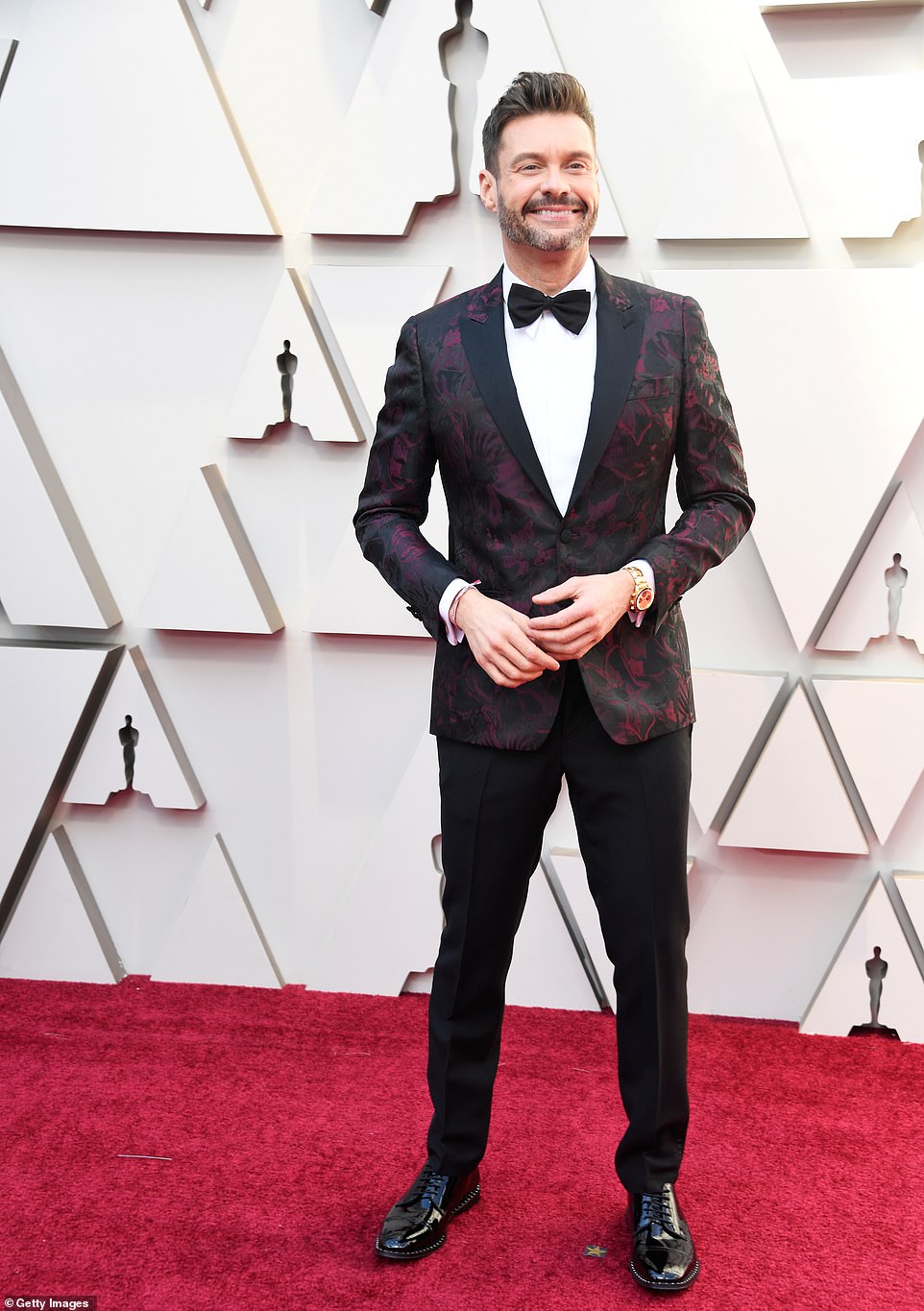 He sure is a busy man these days: Ryan Seacrest, who produces Keeping Up With The Kardashians, is on the red carpet for both E! and ABC. He wore a black and maroon jacket with black slacks and patent leather dress shoes

NOMINEES FOR THE 91ST ACADEMY AWARDS

Bradley Cooper (A Star Is Born)

Lady Gaga (A Star Is Born)

Melissa McCarthy (Can You Ever Forgive Me?)

Richard E. Grant (Can You Ever Forgive Me?)

Sam Elliott (A Star Is Born)

Hale County This Morning, This Evening

Of Fathers and Sons

Spider-Man: Into the Spider-Verse

Can You Ever Forgive Me?

All The Stars (Black Panther)

Shallow (A Star Is Born)