There has been plenty of controversy leading up to Hollywood’s biggest night.

But things quickly turned as Regina King took home the first award of the night.

The 48-year-old star earned Best Supporting Actress for her role in If Beale Street Could Talk as the 2019 Oscars kicked off on Sunday night.

Getting tearful: Regina King earned Best Supporting Actress for her role in If Beale Street Could Talk

She praised James Baldwin, director Barry Jenkins, and her family during her emotional speech.

The veteran actress tearfully said: ‘I’m an example of what support and love look like when poured into someone.’

The star-studded event is being held at The Dolby Theater in Los Angeles. 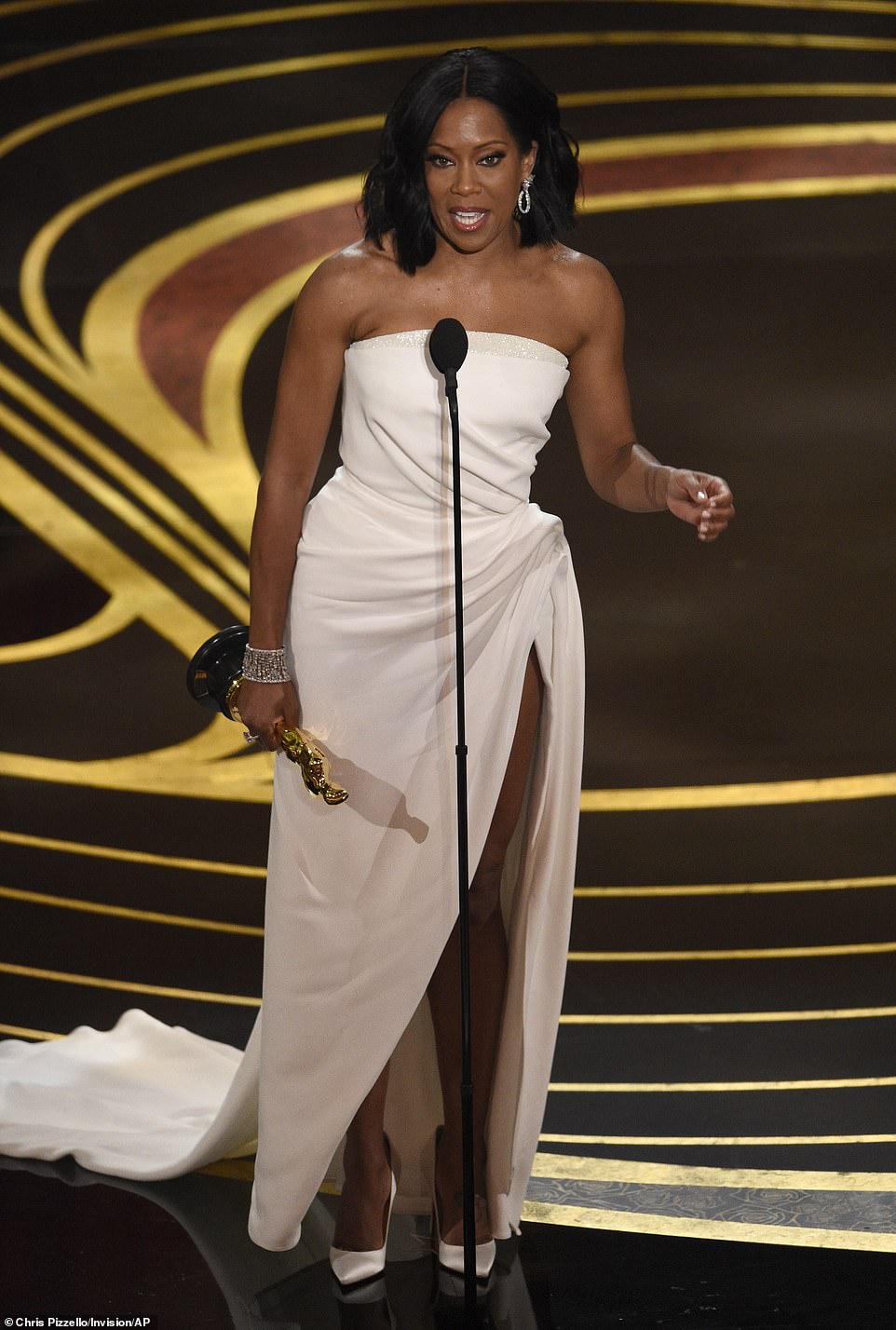 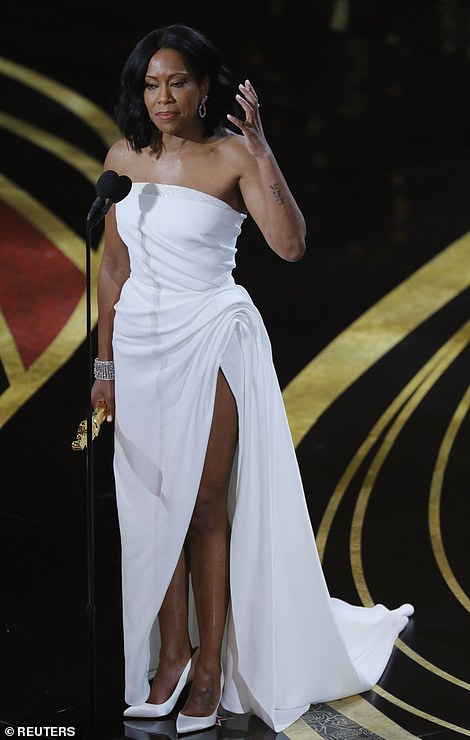 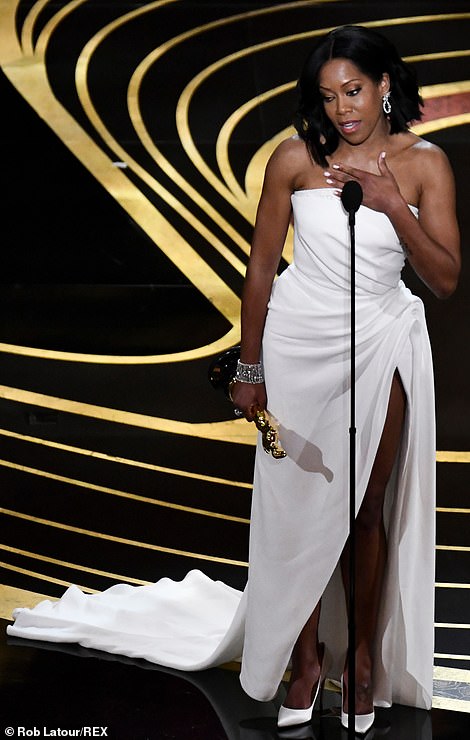 ‘I’m an example of what support and love look like when poured into someone’: She got tearful as she addressed the crowd 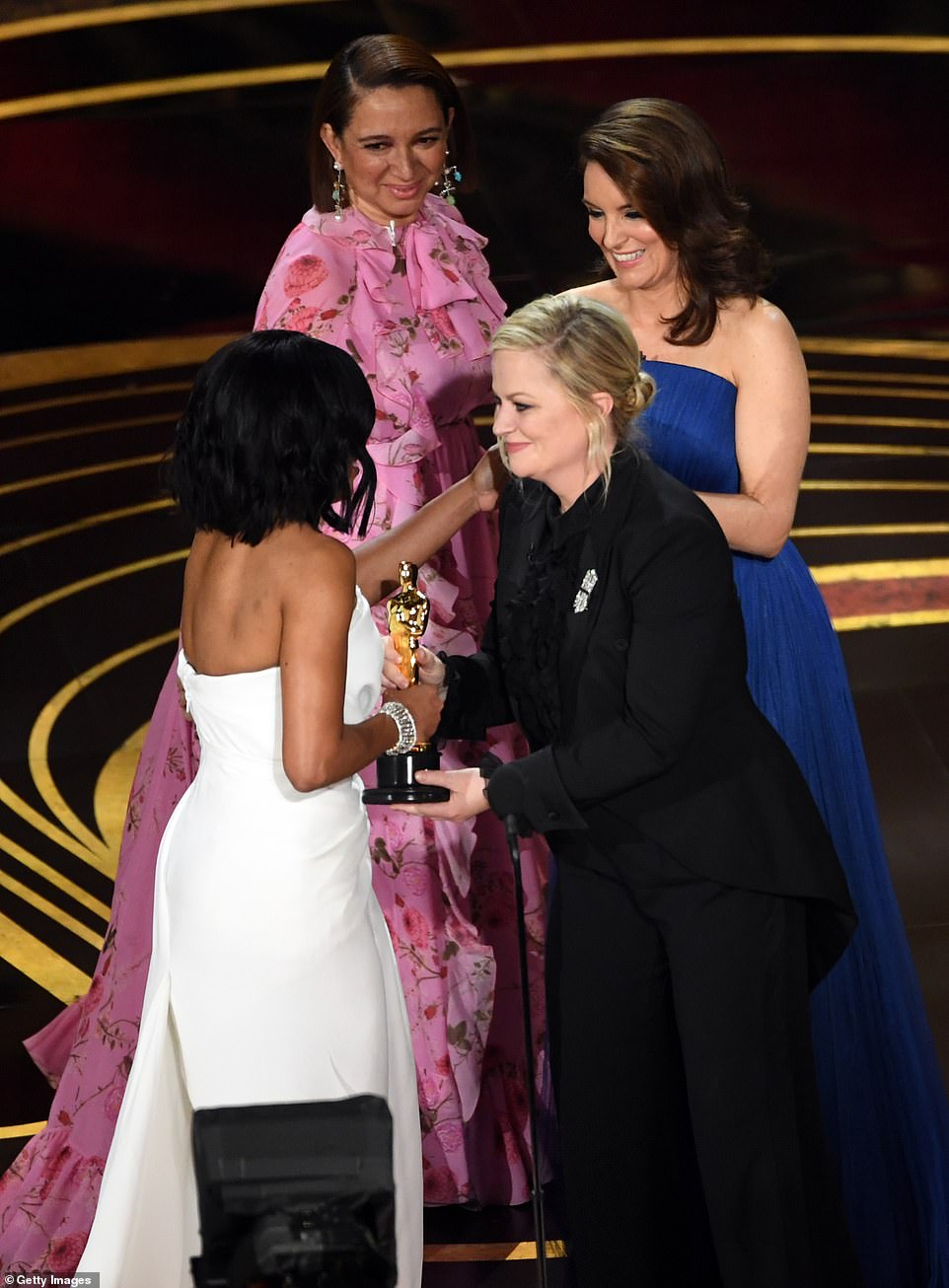 Welcoming committee: She was presented the award by Maya Rudolph, Amy Poehler, and Tina Fey (pictured from left to right)

After the opening credits, Saturday Night Live alums Maya Rudolph, Tina Fey, and Amy Poehler hit the stage for a hilarious opening monologue segment as there is no actual host this year.

This is the first time the show has gone without a host in 30 years as Kevin Hart famously stepped down after some of his old controversial tweets were unearthed.

The three went on to present the Best Supporting Actress Award.

The second award of the night – Best Documentary – was given to Free Solo which is about a professional rock climber named Alex Honnold. 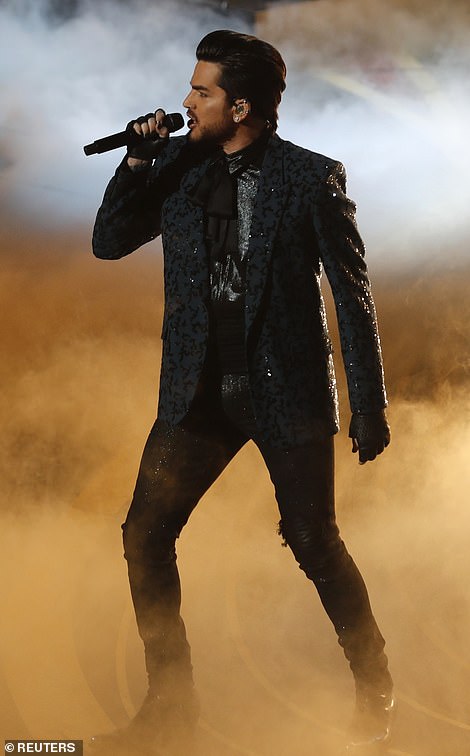 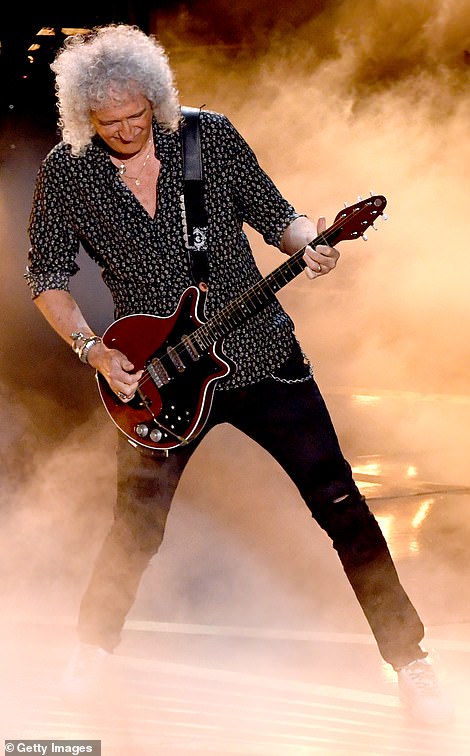 Dynamic duo: Adam Lambert and Brian May of Queen kicked off the show 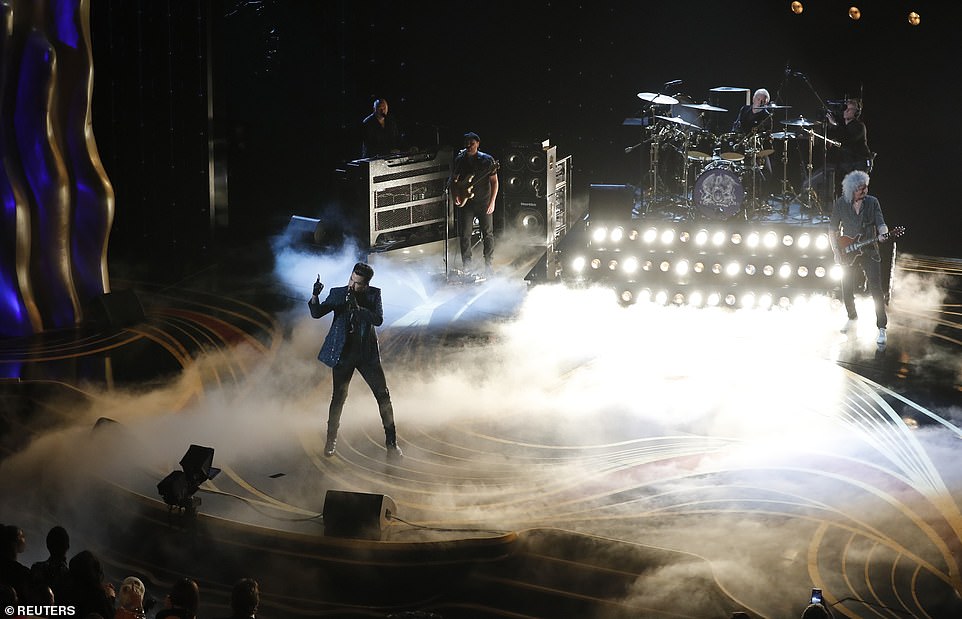 Rocking out: They began the performance with We Will Rock You before wowing the crowd with a rendition of We Are The Champions.

It might be the gold standard of award shows, but with falling viewing figures, The Academy Of Motion Pictures Arts and Sciences have made some major changes for this year’s Oscars ceremony.

These range from skipping a host – after Kevin Hart stepped down – to recruiting  ‘highly recognized talent from various walks of life’ to present the eight nominees for Best Picture, a role usually reserved for actors.

Those talents include anti-Trump chef and restaurateur Jose Andres, Daily Show host Trevor Noah and civil rights leader and Georgia congressman John Lewis and the woman who many consider to be the greatest athlete of all time, Serena Williams. 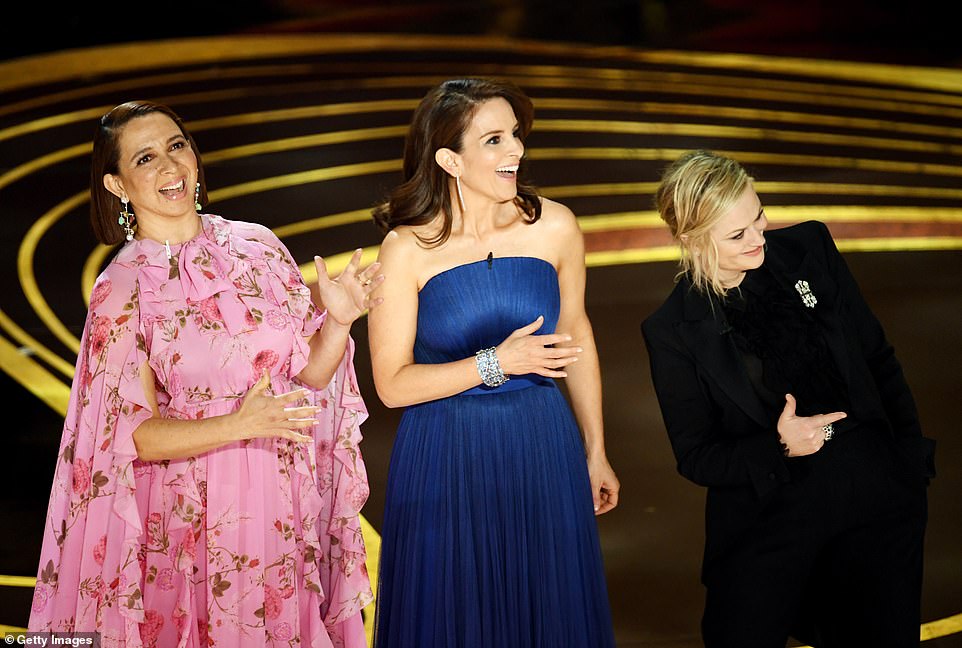 Tremendous trio: After the opening credits, Saturday Night Live alums Maya Rudolph, Tina Fey, and Amy Poehler (left to right) hit the stage for a hilarious opening monologue segment as there is no actual host this year

It is not clear which of the nominated films will be presented by these new presenters, who also include: Dana Carvey, Queen Latifah, Tom Morello, and  Amandla Stenberg.

The final three presenters, Barbra Streisand, Diego Luna  and Mike Meyers, will almost certainly be introducing the to films with which they have close ties: A Star is Born, Roma and Bohemian Rhapsody.

This new line-up of presenters is the latest in a long list of changes made by the Academy this year – many of which have surprised.

It began with the announcement that the Best Song nominees would not be featured in the telecast, a decision that was changed following public uproar. 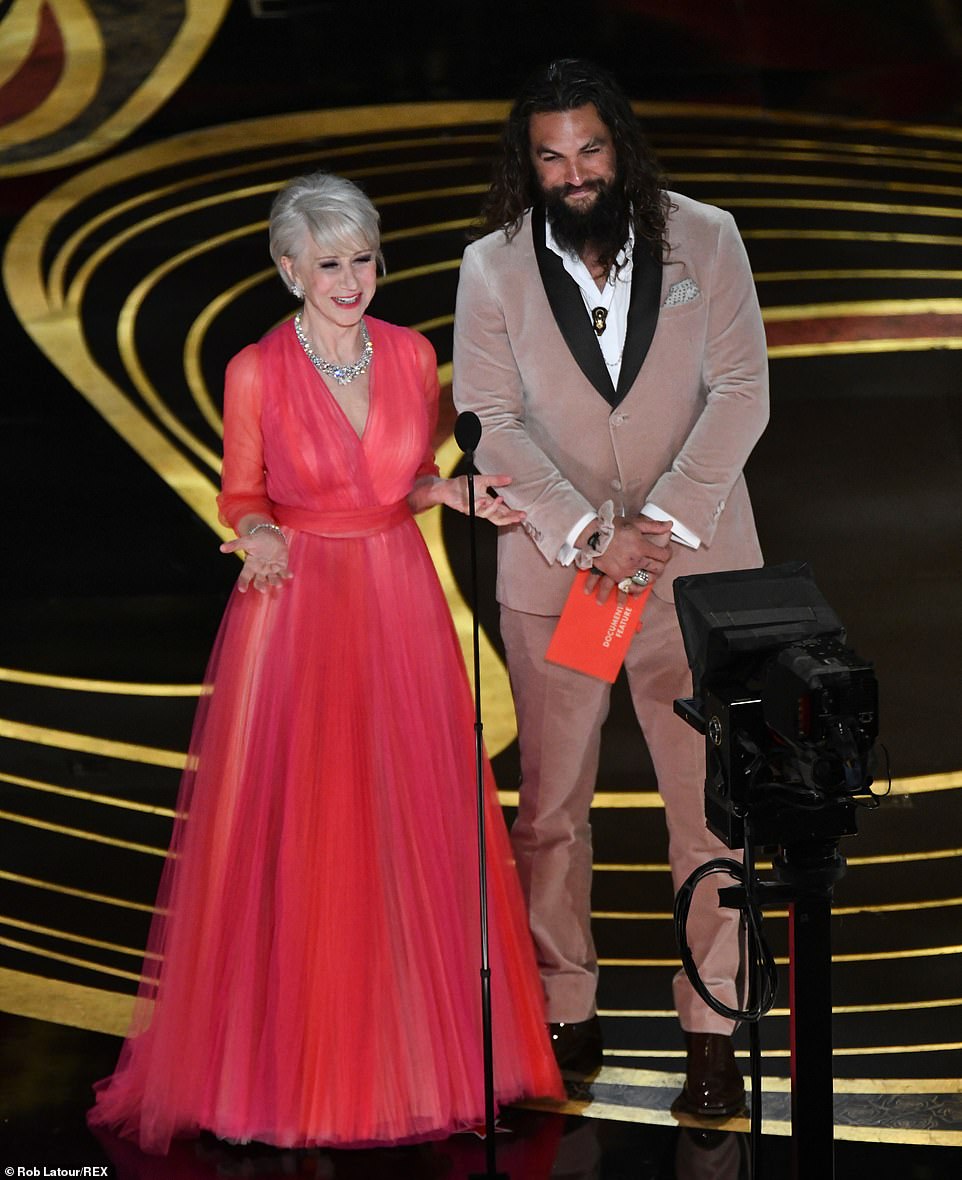 Next was the decision to discontinue the trend of having the actors who won in each category last year present at the ceremony.

That was revealed by Allison Janney, whose appearance presenting alongside Sam Rockwell at the Golden Globes last month proved to be one of the rare highlights of the unremarkable telecast.

Uproar ensued, and the Academy soon announced that the tradition would continue.

Next, the Academy opted to eliminate four categories from the telecast – Cinematography, Film Editing, Live Action Short, and Makeup and Hairstyling – and present those awards during the commercial break.

That managed to draw the ire of many members of the Academy, and was protested in an open letter signed by the likes of  Glenn Close, Robert DeNiro, Kerry Washington, Brad Pitt, Halle Berry and hundreds more.

Last week it was announced that the Academy Awards reversed their decision to cut those four categories after the furor.

It is unclear what other surprises producers may have up their sleeves with just a few days left between now and the 91st Academy Awards ceremony, which will air on ABC this Sunday.

NOMINEES FOR THE 91ST ACADEMY AWARDS

Bradley Cooper (A Star Is Born)

Lady Gaga (A Star Is Born)

Melissa McCarthy (Can You Ever Forgive Me?)

Richard E. Grant (Can You Ever Forgive Me?)

Sam Elliott (A Star Is Born)

Hale County This Morning, This Evening

Of Fathers and Sons

Spider-Man: Into the Spider-Verse

Can You Ever Forgive Me?

All The Stars (Black Panther)

Shallow (A Star Is Born)