Othello review: An average production lit up by Mark Rylance

Sir Mark Rylance used to run Shakespeare’s Globe, and nobody knows this noisy, boisterous theatre better. Here, as the malignant Iago, his performance is played right into the belly of the courtyard and at one point he strums a mandolin like a rock god, right in the faces of adoring female fans sweating in the Globe’s ‘mosh pit’.

Of the multitude of Shakespearean slimebags, Iago is surely the most fetid example of nihilistic nastiness.

Denied preferment, he takes revenge on his military boss by making him believe his blameless young bride Desdemona is having an affair with the officer (Cassio) promoted over him. 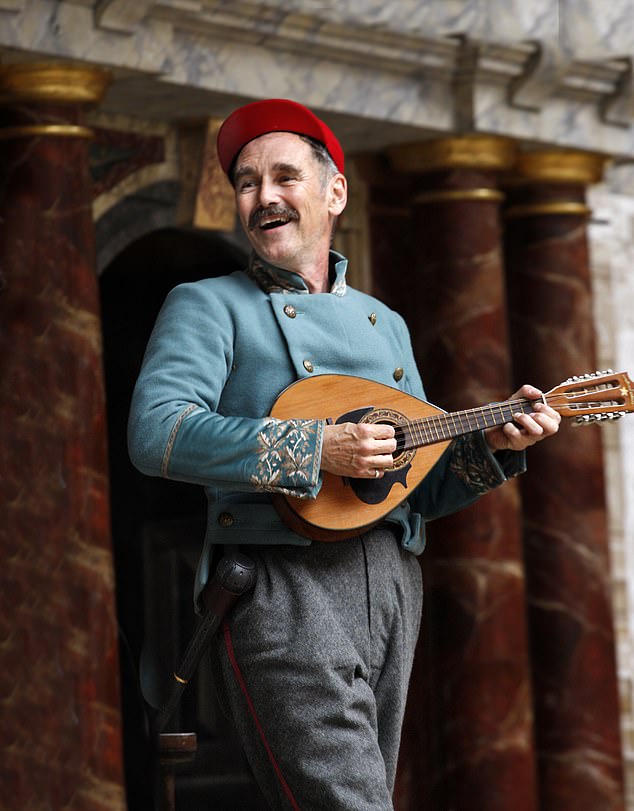 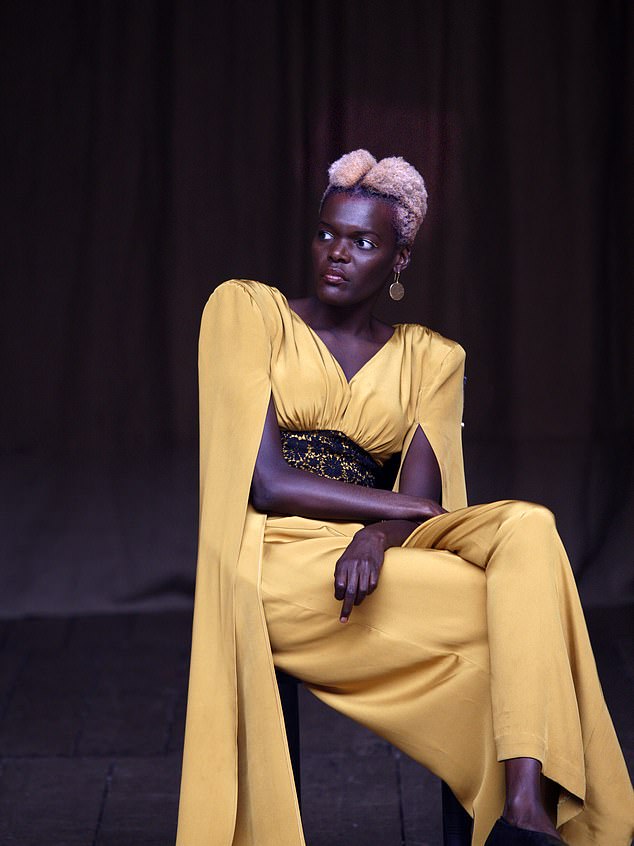 Iago’s duped wife Emilia is played by Sheila Atim (above), so compelling in Girl From The North Country

Pacing feverishly about the stage, Iago literally builds his plan to destroy Othello on the hoof. It’s a delicate balance.

Othello himself is played with much dignity by André Holland (from the film Moonlight), his Alabama accent fully intact, and my complaint about the actor here is that he’s a touch prosaic — the musical soul of Shakespeare’s exotic warlord is missing.

His line ‘Keep up your bright swords, for the dew will rust them’ here sounds like health and safety advice.

In this production from director Claire van Kampen (Rylance’s wife) poetry is the evening’s big casualty.

That and any sense of Venice’s military machismo. The Doge of Venice here is a woman who may have sold you sun cream in Boots.

Iago’s duped wife Emilia is played by Sheila Atim, so compelling in Girl From The North Country.

Her lovely harmonising in the willow song with Jessica Warbeck’s Desdemona — the prelude to the bedchamber carnage when Othello finally destroys the thing he loves — is fabulous. 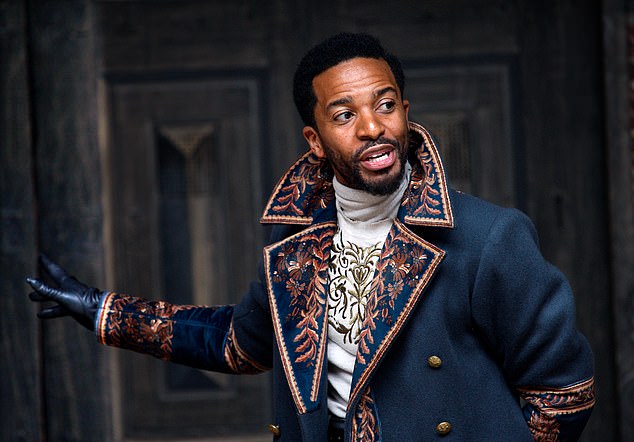 Othello himself is played with much dignity by André Holland (above, from the film Moonlight), his Alabama accent fully intact

But having a black actress as the wife of a self-confessed racist struck me as a bit weird.

If directors are genuinely sincere about ‘colour-blind’ casting, why is a great role like Othello still a no-go area for actors who don’t happen to be black?

This is a fairly average, rather confused production, lit up by Rylance’s creepy, vivid performance.

The Song Of Lunch

When Robert Bathurst’s middle-aged man from Bloomsbury meets Rebecca Johnson’s glamorous woman from Paris at an Italian restaurant in Soho, he hopes to rekindle a passionate lost love. She, on the other hand, never reveals why she agreed to lunch with her former lover but says her married life is ‘perfect’. The date never gets any better. 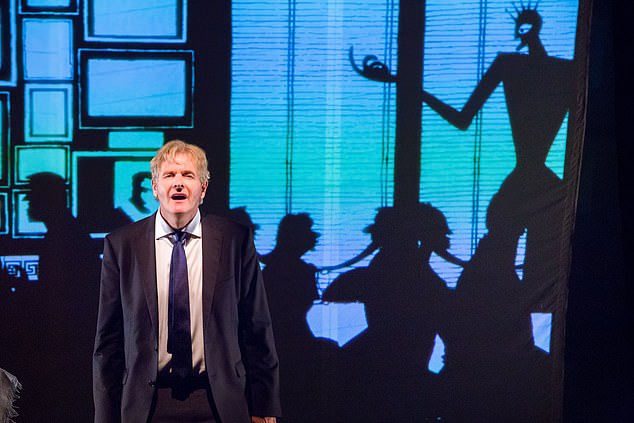 When Robert Bathurst’s (above) middle-aged man from Bloomsbury meets Rebecca Johnson’s glamorous woman from Paris at an Italian restaurant in Soho, he hopes to rekindle a lost love

Christopher Reid’s drama, told in verse, is billed as a comedy. But as Reid admits, the farce has ‘a bitter flavour to it and my hero would turn out like Orpheus in pursuit of his dead wife’ – echoed by Charles Peattie’s crisp animation, a backdrop to this complex two-hander.

Bathurst is tremendous as the bitter and nostalgic publisher laying into the Chianti. Johnson is his perfect foil, restrained until she lashes out. It is a crisp, full-bodied, powerful drama. Just don’t expect many laughs.

Simon Callow has long admired Oscar Wilde, but for years lamented he was the wrong size to play him.

His treatment of Wilde’s epic letter to his former lover Lord Alfred ‘Bosie’ Douglas, however – originally 80 close-written pages, penned in 1897 in Reading Gaol towards the end of his imprisonment – allows him to unleash every skill in his theatrical armoury. Seated under a probing, fearsome interrogation light, below, he gives a searing account of Wilde’s words. He repeatedly denounces Bosie as an empty and demanding young man full of hate (particularly for his father, the Marquess of Queensberry) who had forced his way into Wilde’s life and ‘broken it into pieces’.

Neither does Wilde spare himself. ‘Blindly as an ox,’ he opines, ‘I staggered into the shambles’ (of Bosie’s life and feud with his father).

Callow does not resemble Wilde but his powerful performance of the playwright’s often self-pitying rage, and the tragic revelation that he loves his cruel former lover still, is deeply affecting.

The Importance Of Being Earnest

Unusually, this most sublime of Wildean comedies opens with man-about-town Algernon playing the piano as a young man departs with a peck on the lips. On the wall of his London pad hangs a tasteful painting of two naked men wrestling. 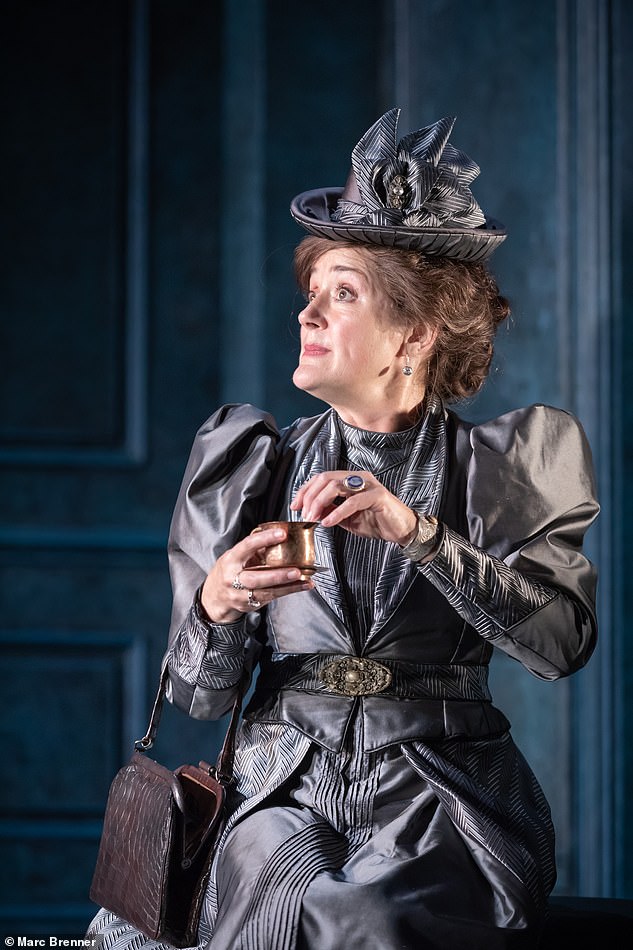 Sophie Thompson’s Lady Bracknell (above) is the upholstered “gorgon” of old, channelling a hint of Patricia Routledge 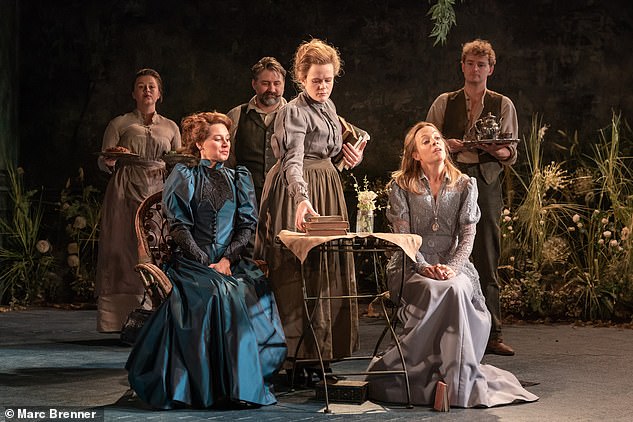 It’s impossible not to respond to Wilde’s sparkling one-liners and acute social observations, but too much here is delivered at breathless, breakneck speed

Algy (Fehinti Balogun) even shares an affectionate kiss on the cheek with his crumbling manservant (though even more shocking, classwise, a glass of sherry too). There’s also a moment of playful bottom-pinching between the bumptious Algy and pal John Worthing (all forgotten when they find they are brothers!).

These shenanigans are playful rather than overtly sexual and Michael Fentiman’s production reminded me of A Midsummer Night’s Dream, notably in the delicious afternoon tea scene between rivals Cecily (Fiona Button, a batty fantasist) and Gwendolen. Recalling Shakespeare’s lovers’ fight scene, it’s spiky and set in a dark misty garden of creepy-looking plants rather than the sunny manicured lawns of Hertfordshire.

Wilde is all about restraint, from which the comic tension of his beautifully wrought situations arises – this is all farcical abandon. Sophie Thompson’s Lady Bracknell is the upholstered “gorgon” of old, channelling a hint of Patricia Routledge.

It’s impossible not to respond to Wilde’s sparkling one-liners and acute social observations, but too much here is delivered at breathless, breakneck speed (no wonder it’s only two hours, ten minutes long), and at a samey, shouty level – all rather exhausting. Pass the cucumber sandwiches.

Sweet Charity, originally directed and chorographed by Bob Fosse on stage and on film, is a tempting vehicle to revive. Cy Coleman scored a high hit rate with songs such as Big Spender, If My Friends Could See Me Now and Rhythm Of Life. 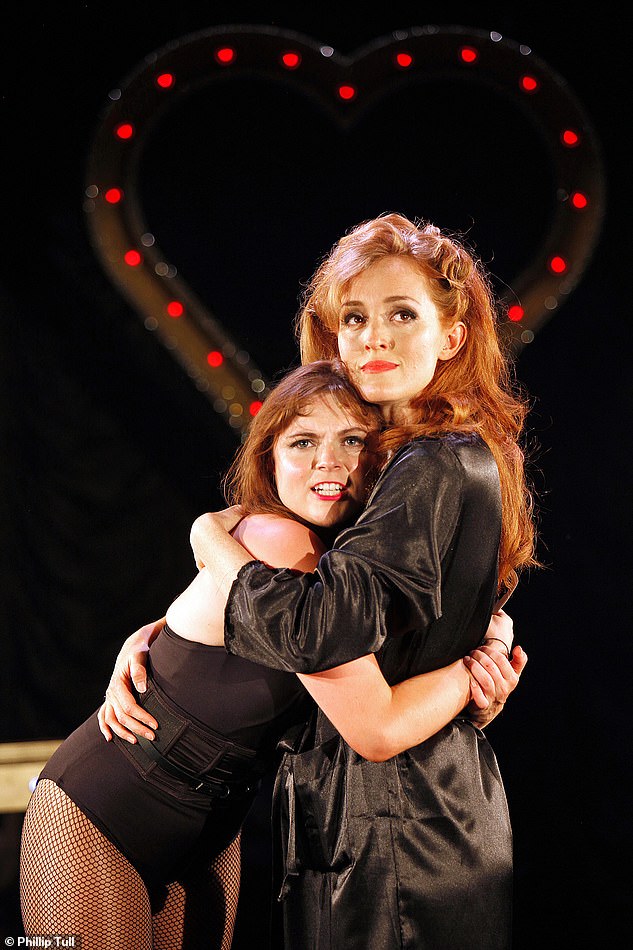 Gemma Sutton (above, with Vivien Carter) is appealingly guileless as the optimistic, resilient Charity, and has a wonderful voice

This production demands a lot from an impressively hard-working cast of actor-musicians, who must play the lively score as well as sing, act and dance.

However, director Paul Hart’s attempts to update the tale of a naive dancehall hostess looking desperately for love to Trump’s America don’t always work. Although there’s some snappy cynicism in the dialogue, there’s little real grit in this cheery production.

Gemma Sutton is appealingly guileless as the optimistic, resilient Charity, and has a wonderful voice. She’s as plucky as the production, but this is just too sugary.