The parents of US college student Otto Warmbier sued North Korea on Thursday over their son’s death in 2017 following his release from captivity there, according to the lawsuit filed in US District Court.

The White House on Thursday released photos of Mike Pompeo, the newly confirmed secretary of state, shaking hands with Kim during their secret meeting in Pyongyang earlier this month.

Otto Warmbier, a 22-year-old UVA student from Ohio, was imprisoned in North Korea from January 2016 until he returned to the United States in a coma. He died days later 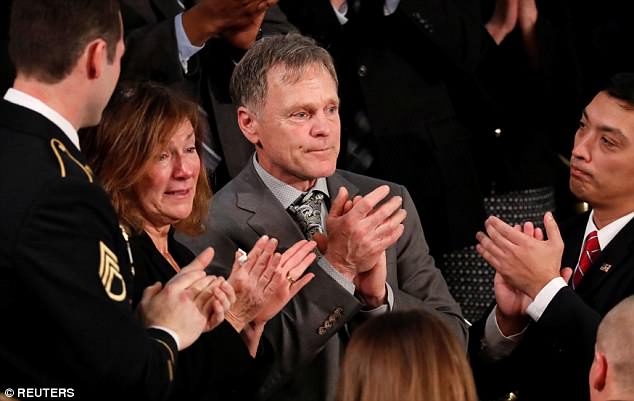 His parents, seen here at the 2018 State of the Union, have sued North Korea over his death. ‘Otto was taken hostage, kept as a prisoner for political purposes, used as a pawn and singled out for exceptionally harsh and brutal treatment by Kim Jong Un,’ Fred Warmbier said

‘Otto was taken hostage, kept as a prisoner for political purposes, used as a pawn and singled out for exceptionally harsh and brutal treatment by Kim Jong Un,’ his father Fred Warmbier said in a statement.

‘Kim and his regime have portrayed themselves as innocent, while they intentionally destroyed our son´s life. This lawsuit is another step in holding North Korea accountable for its barbaric treatment of Otto and our family.’

Warmbier, a 22-year-old student from Wyoming, Ohio, was imprisoned in North Korea from January 2016 until he returned to the United States in a coma.

He died a few days after his return, and an Ohio coroner blamed lack of oxygen and blood to the brain.

‘North Korea, which is a rogue regime, took Otto hostage for its own wrongful ends and brutally tortured and murdered him,’ the wrongful-death lawsuit said.

North Korea does not have an embassy in the United States.

A representative of the North Korean mission to the United Nations in New York was not immediately available to comment.

Warmbier’s attorney, Benjamin Hatch, did not respond to a request for comment about the timing of the lawsuit. 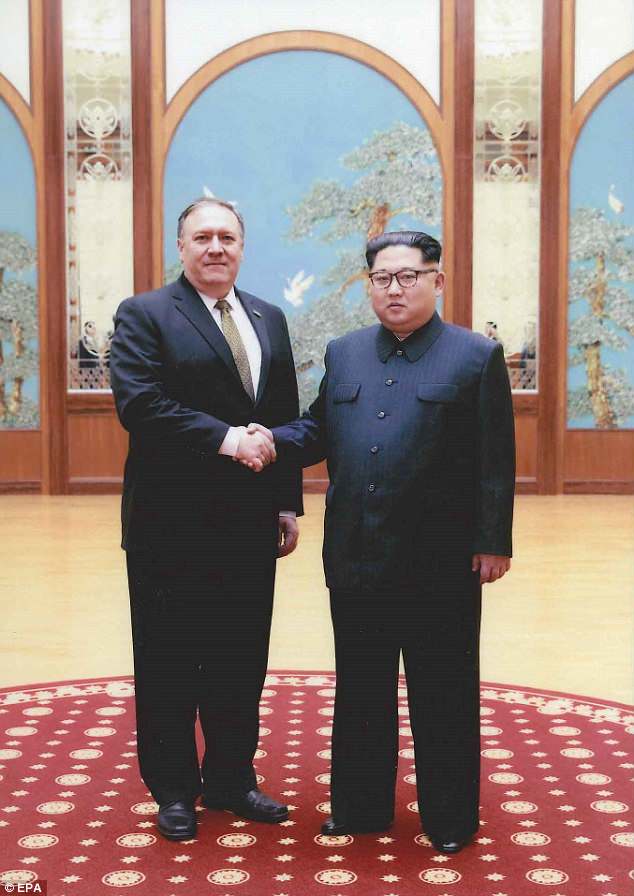 The White House on Thursday released photos of Mike Pompeo, the newly confirmed secretary of state, shaking hands with Kim during their secret meeting in Pyongyang earlier this month. Kim and President Donald Trump are set to meet for a summit in weeks

The 22-page complaint outlines in blunt terms the adverse fortunes of Warmbier after he went on a five-day tour to North Korea run by a China-based tour operator, prior to taking up a study program in Hong Kong.

He sought get a better understanding how people in the North’s closed society lived, the lawsuit says.

It says that after his arrest, Warmbier, from Cincinnati, Ohio, was pressured to make a televised confession and then convicted of subversion after a one-hour trial.

He was denied communication with his family by any means until in early June 2017 they were informed he was in a coma and had been in that condition for one year.

The lawsuit says that when Warmbier returned, his parents ‘were stunned to see his condition.

‘Otto was blind and deaf. He had a shaved head, a feeding tube coming out of his nose, was jerking violently and howling, and was completely unresponsive to any of their efforts to comfort him.’

His once straight teeth were misaligned and he had an unexplained, scarred wound on his left foot.

North Korea claimed that Warmbier had contracted botulism but his physicians in the US found no evidence of that, according to the lawsuit which says that the North’s false explanations for Otto’s condition demonstrate that is it ‘covering up its torture and mistreatment of Otto while he was in North Korean custody.’

The lawsuit contends that North Korea is liable for Warmbier’s wrongful death – describing it as ‘extrajudicial killing’ – and calls for a judgment for both ‘economic and non-economic compensatory damages’ to his parents.

There are still three Americans held in North Korea, and their cases are a continuing source of tense relations between the adversary nations.

US officials have said that Pompeo raised the issue when he met with Kim on a rare trip to North Korea nearly four weeks ago to prepare for a Trump-Kim summit.