‘Our Christmas miracle is happening’: 17-year-old with cystic fibrosis awakes from two-week coma

A Florida teenager with cystic fibrosis has awoken from a week-long coma, and her parents are saying it’s a Christmas miracle.

Christina ‘Chrissy’ VanDerVelden has been battling the genetic disease that damages the lungs since she was just an infant.

But around Halloween, her health started rapidly declining and – when she slipped into a coma two weeks ago – her parents were told to prepare to say goodbye.

After a week of being on life support and unresponsive, the 17-year-old finally awoke.

However, the road to recovery is far from over. Doctors say that Chrissy’s lungs have become so weak that she needs a double lung transplant and if she doesn’t get it soon, she could die.

Christina ‘Chrissy’ VanDerVelden, 17, of Jacksonville, Florida, awoke from a week-long coma after her health – due to cystic fibrosis – began rapidly declining. Pictured: Chrissy in a coma 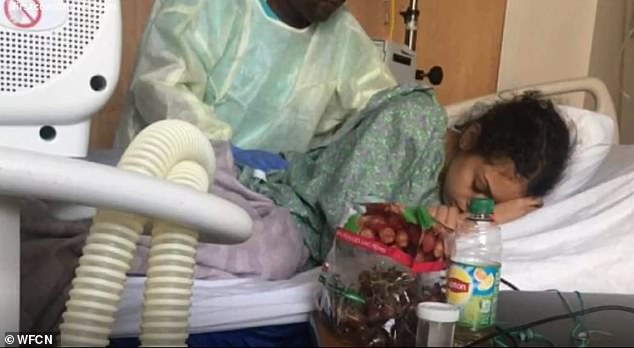 Chrissy was diagnosed with the genetic disease that damages the lungs since she was just an infant. But her health started rapidly declining in October. Pictured: Chrissy in the hospital 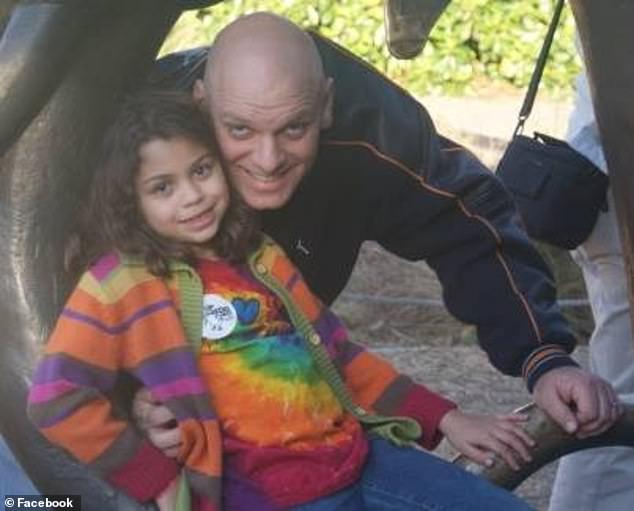 Her heart, lungs and kidneys were all being operated by machines and doctors told her parents that they may need to prepare to say goodbye. Pictured: Chrissy with her father, William

Chrissy was diagnosed with cystic fibrosis when she was just six months old.

Sufferers have a defective gene that causes a build-up of mucus in the airwaves and makes it increasingly difficult to breathe over time.

Bacteria can become trapped, which can cause the lungs to become damaged or infected, and in some cases send the sufferer into respiratory failure, according to the Cystic Fibrosis Foundation.

The Cystic Fibrosis Foundation estimates that more than 30,000 people have the condition in the US and that 1,000 new cases are diagnosed every year.

A defective gene causes a build-up of mucus in the airwaves, making it increasingly difficult to breathe over time.

While healthy people cough naturally, that does not happen for people with CF.

Eventually, lung function depletes to the point that sufferers will need a double lung transplant to survive.

The median age of survival is currently 33.4 years, with half of patients living into their fifties or sixties.

In addition to cystic fibrosis, Chrissy is also battling type 1 diabetes, which occurs when the body produces little to no insulin, the hormone needed to get glucose from the bloodstream into cells.

Her father, William VanDerVelden, told First Coast News that Chrissy’s health started declining around Halloween so they rushed her to Wolfson Children’s Hospital in Jacksonville.

She underwent emergency surgery and was then hooked up to an Extracorporeal Membrane Oxygenation (ECMO) machine, which pumps and oxygenates a patient’s blood outside the body and allows the heart and lungs to rest.

Then, on November 28, after almost a month at the hospital, Chrissy slipped into a coma. She was transferred to the Mayo Clinic in Jacksonville and put on life support.

Her kidneys shut down, requiring 24/7 dialysis, and her oxygen levels fell so low – despite being on the ECMO machine – that she had to undergo another emergency surgery.

She was switched to a VV-ECMO, which just supports the lungs. The machine drains blood from the venous system, oxygen is added outside the body while carbon dioxide is removed, and the blood is then pumped back in.

‘They told me to either keep her on life support and risk brain damage or prepare to say goodbye. But they never stopped trying they were committed to doing something to save her.’

After a week, on December 5, Chrissy started waking up.

‘She started to open her eyes, tilt her head and answer questions with nods,’ William said. ‘I just grabbed her hand and I told her that I loved her.’

Despite waking up, Chrissy’s road to recovery is a long one.

On Tuesday, doctors installed a PICC line to deliver medication through an IV and a tube into her gallbladder – which became infected – to drain fluid from it.

In addition, her stomach has been overrun by C difficile, a bacterium that causes life-threatening diarrhea, from all the good bacteria in her gut being wiped out by a prolonged use of antibiotics, according to a GoFundMe page. 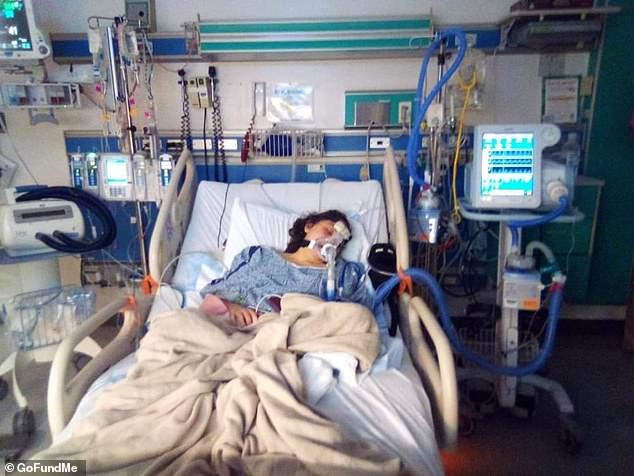 On December 5, after a week, Chrissy finally woke up. But she is now battling a multitude of health issues including an infected gall bladder and a bacterium that causes diarrhea overrunning her gut. Pictured: Chrissy in the hospital 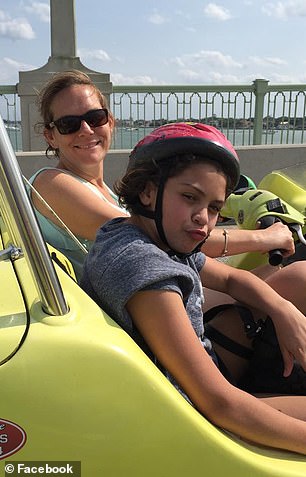 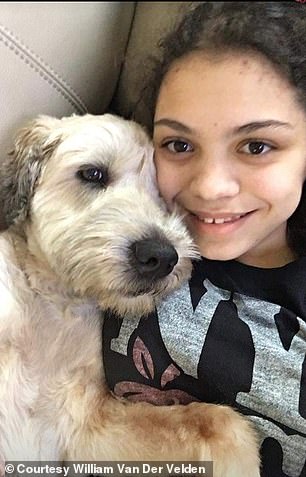 Doctors have told her family that her lung function has depleted to the point where she needs a double lung transplant.  However, her health needs to improve before she is put on the list. Pictured: Chrissy with her mom Alaina, left, and with her dog, right 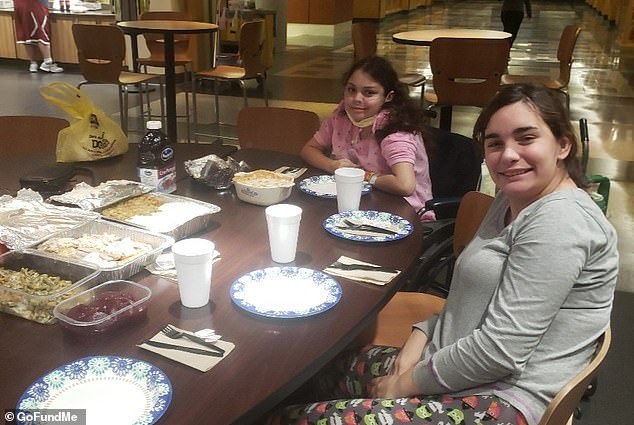 It’s been a rough year for the family because their other daughter, Alexis, has Asperger’s syndrome and mom Alaina was hospitalized after contracting West Nile virus. Pictured: Chrissy, left, and her sister Alexis l

On top of all of this, doctors have told her family that her lung function has depleted to the point where she needs a double lung transplant, but her health needs to improve before she’s put on the list.

‘My daughter is a trooper and the only thing I want is to have my family back together for Christmas,’ William said.

The VanDerVeldens, who are both retired Navy veterans, have had a difficult year aside from Chrissy’s medical ordeal.

Earlier this year, her mother Alaina was hospitalized for neuroinvasive West Nile virus, the most severe stage of the tick-borne illness.

Their other daughter, Alexis, has Asperger’s syndrome, a developmental disorder on the autism spectrum – meaning a majority of the couple’s life has revolved around taking care of the girls.

They also need to rip out the carpet from their home, which may trap pollutants like dust mites and allergens and aggravate Chrissy’s disease.

‘We’ve always been able to help others but, this time, we can’t even help our own daughter and we’re embarrassed to ask for help ourselves,’ Alaina told Fox News.

Her family has started a GoFundMe page to help cover the cost of Chrissy’s mounting medical bills.