‘Our community failed us’: Mother of infant boy who got measles slams anti-vaxxers

In the the four months and three weeks since his birth, Walter Blum had been the happy, healthy baby his parents, Sara and Jason had wished for.

Then, a day before he turned five months old, Walter’s temperature shot up to 102.5F.

Soon, the baby’s skin started to look inflamed and rashy – the tell-tale sign that Walter had the measles.

‘It was all over his face. All over the back of his neck. It was really red and splotchy,’ Sara said.

Sara Blum (left) says that her California community failed to do its due diligence and get vaccinated at herd immunity levels, causing her infant son, Walter (right) to contract measles

‘It was very alarming.’

Measles is a viral infection that parents like Sara and Jason aren’t supposed to worry about in the modern world.

The Blums are, ostensibly, pro-vaccine and intend to get Walter all of his shots  – when he’s old enough to have them.

But the Centers for Disease Control and Prevention (CDC) recommends that babies don’t get their first dose of the measles, mumps and rubella (MMR) shot between 12 and 15 months of age, and the second between four and six years.

Born in California in late 2018, Walter came into the world in the midst of the ongoing measles outbreak, and contracted the virus seven months before he was eligible to get his first shot.

When enough people – 90-95 percent of a population, to be exact – are vaccinated against a disease, herd immunity protects those like Walter who are too young or have immune systems too damaged to withstand a shot.

‘It’s really sad, but our community kind of failed us,’ Sara said.

Of the 704 people sickened by measles this year, 93 (including Walter) have been under 12 months, meaning they are too young to be vaccinated.

In total, 503 of those that have contracted the measles virus are unvaccinated, but the vast majority of them elected to skip their shots (or, more likely, their parents elected for them to skip the shots). 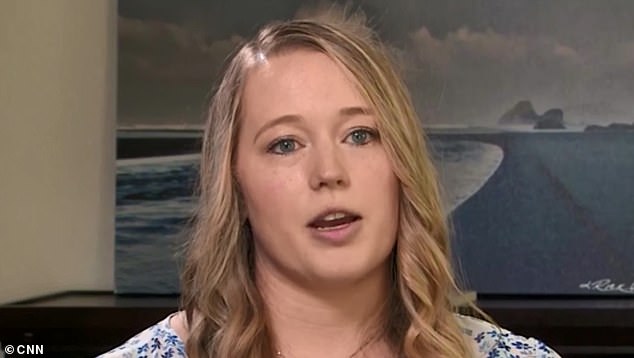 ‘It’s terrifying,’ Sara said of watching her son’s temperature spike to 102.5F as the measles rash covered his skin

Vaccination runs up against the First Amendment in the US, because all 50 states must grant exemptions if immunization goes against their religious beliefs.

But in 17 states, residents can simply claim a ‘philosophical exemption.’

California, where the Blums live, had such an exemption until 2015, when the state legislature did away with the exemption in the aftermath of a massive measles outbreak with Disneyland as its epicenter.

Nonetheless, several California counties have a cumulative 38 cases of measles, 28 of which the state health department says are linked to local outbreaks.

In New York, Washington and Oregon, this year’s outbreaks have spread primarily among close-knit religious groups.

During a Monday press briefing, the CDC said that measles had primarily been spreading among introduced by travelers visiting from or returning from Ukraine, the Philippines and Israel – all countries with their own serious outbreaks – to the US.

It’s not clear what communities measles is thriving within in California, though officials there credit improved vaccination rates for keeping measles rates from climbing any higher than they have.

According to the state health department’s immunization 2017-2018 immunization assessment, over 95 percent of kindergartners were fully up-to-date on their vaccines.

Still, vaccinations have not been ubiquitous enough to protect some infants, like Walter Blum.

Walter has recovered since falling ill in March, but the incident has left his family shaken over the state of vaccination in their own community.