Our Greek revival: A family trip to Rhodes

Our Greek revival: Escaping to Rhodes was the perfect tonic for the weary parents of boisterous children

By Caroline Gammell For The Daily Mail

The novelty of having a private swimming pool does not wear off for young children.

With not one but two doors leading to our own blue oasis, there was repeated clamouring to be allowed to jump in, whether it was sunny or cloudy, first thing in the morning or late at night.

This was our half-term break, staying on the Greek island of Rhodes, where there is a bay named after actor Anthony Quinn, Pink Floyd’s David Gilmour once built a villa, and Madonna and Naomi Campbell have put in wellpublicised appearances. With four young children in tow, we were not up for the party isle of Mykonos, but wanted simpler fare – sun, swimming, good food, some exploring and, maybe, just maybe, a little time to relax.

Ancient beauty: The acropolis overlooking Lindos village dates from 300BC

We thought it was time to bite the bullet and take our sons, aged seven and five, and our three-year-old twin girls on a plane. This was a risky experiment, as pretty much every holiday has been underpinned by a vehicle big enough to carry everything we might need.

This time was different: no car, no pram. Just two (large) bags of clothes accompanied us on our four-hour evening flight.

A 50-minute drive to the southeast of the island took us to the new eco-friendly, all-inclusive Gennadi Grand Resort. The hotel recycles 20,000 litres of clean water every hour and offers only watersaving showers.

We booked two spacious double bedrooms connected by a 10ft sliding door. One had a large pullout sofa bed, so all the children could sleep together. 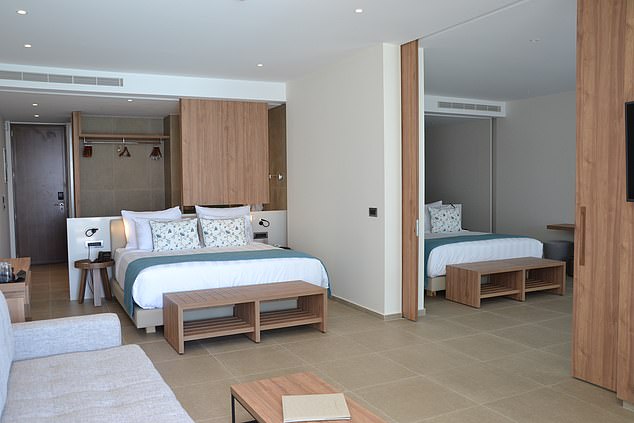 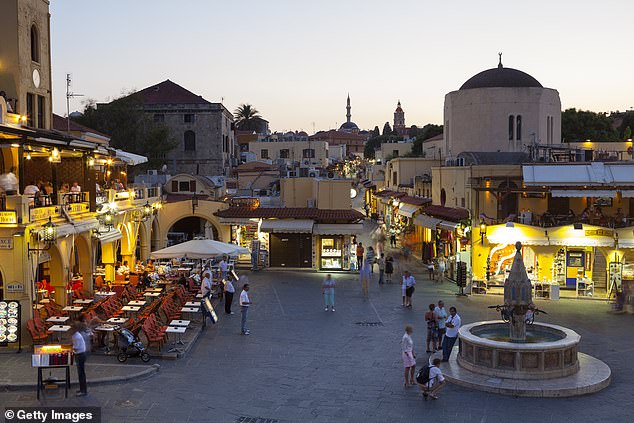 The view over Ippokratou Square at dusk. Rhodes Town is a Unesco world heritage site

The resort is in a lovely setting overlooking the Mediterranean (Rhodes, the largest of the Dodecanese islands, divides the Med from the Aegean), with a short walk to a pebbled beach.

Kyriakos, the young maître’d, charmed us all, as did so many of the staff, including Vernados, who talked us through ouzo versus eau de vie during a Greek meze meal.

This led to a long discussion about the Colossus of Rhodes, a towering bronze statue of the sun god Helios. It was said to be 105ft tall and stood grandly astride the harbour from 282BC, until it was destroyed in an earthquake.

As no remains have ever been found, some question its existence, which prompted us to visit the walled Old Town of Rhodes.

As the oldest inhabited medieval city in Europe, the town has rightly been designated as a UNESCO World Heritage Site. Walking in via one of the seven enormous gates which lead through the fortified walls – built and rebuilt by 14th century Christian knights to fend off the Ottoman Turks – you are taken into a warren of winding streets. 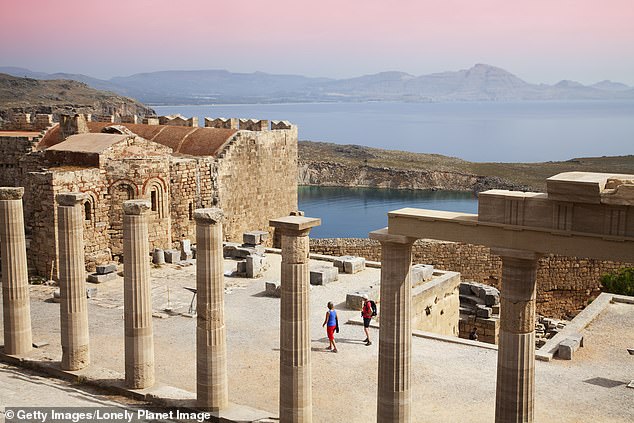 Rosy: The view from the acropolis at Lindos over the coastline 558ft below

It is a real joy to get lost and browse the tourist trinkets, leather goods and food stalls vying for your attention.

A highlight is the almost perfectly preserved Street of the Knights, which slopes away from the port towards the Palace of the Grand Master of the Knights of Rhodes.

Down the coast lies the village of Lindos, where even the twins thought it worth clambering up the many steps to the ruins of the 300BC acropolis for the superb view. As the children played, we gazed down at the plunging coastline 558ft below, and realised we had enjoyed a lot more than a sunshine break – a breathtaking change of scenery on an historically vibrant island. Experiment over, mission accomplished.

Heathrow to Athens with British Airways (ba.com), from £143 return. Athens to Rhodes with Aegean Airlines (aegeanair.com), from £52 return. B&B double rooms at the Gennadi Grand Resort (gennadigrandresort.com) start at £223 per night (£643 in high season). For more details: discovergreece.com.