Naomi Osaka was not the Japanese Olympic Committee’s first-choice to light the Olympic flame and mark the opening of the 2021 Olympics – instead, sources say, the former committee chairman wanted someone who was ‘pure Japanese.’

Yoshiro Mori, who resigned from his position as chair of the Tokyo Organizing Committee in disgrace in February, had reportedly been pressuring his colleagues to get former Yankees player Hideki Matsui to light the torch.

‘Mori wanted “Godzilla” to light the Olympic flame at the end, not Naomi Osaka,’ an employee for the committee anonymously told The Daily Beast, referring to Matsui’s nickname he earned for his battling power as a former Yankee.

He ended his two-decade career with a total of 507 home runs, and has since made an appearance in Godzilla versus Mechagodzilla. 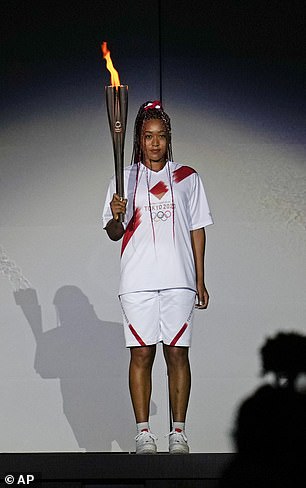 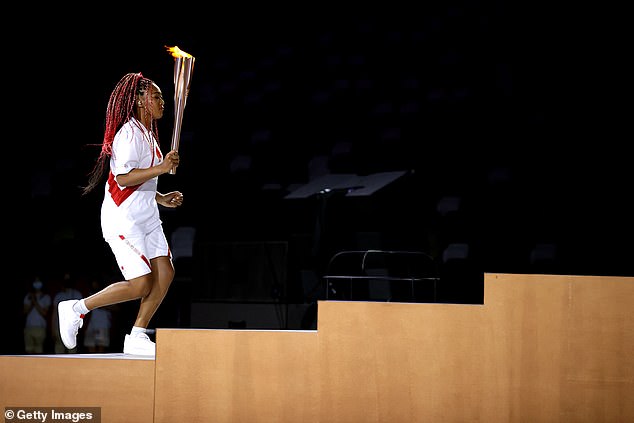 Osaka, of Team Japan, carried the torch towards the Olympic cauldron 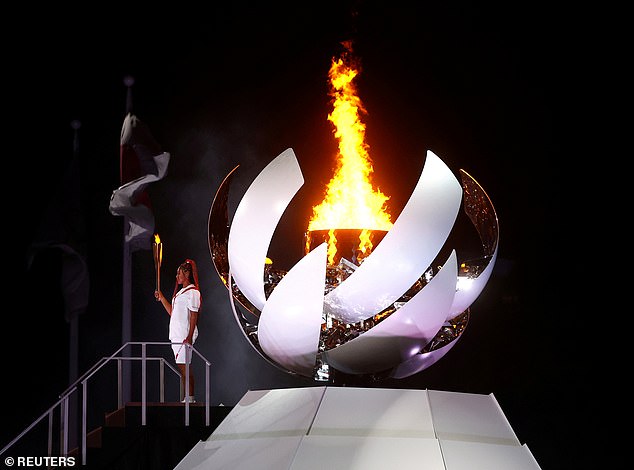 Mori, who had previously served as the honorary chairman of Matsui’s fan club in Ishikawa Prefecture – where Matsui was born, was reportedly insistent on Matsui representing the country in the final moments of the opening ceremonies.

He told the members of the committee that Matsui is ‘a pure Japanese man and a baseball champion in the United States and Japan – the  embodiment of [a] fighting spirit.’

The employee also said Mori, a former prime minister in the country, thought it would be ‘funny in the sense that Godzilla breathes flames, and Matsui would be lighting the cauldron.’

And the committee would usually do what Mori wanted, an employee with Dentsu, a public relations firm exclusively partnered with the Games, who worked on the opening ceremony, told the Daily Beast.

‘If he wanted something changed or something done, then it was done,’ the employee, who also remained anonymous, said.

‘Mori was practically the voice of God.’

It wasn’t until after Mori resigned in disgrace in February, following comments he made apparently claiming women talk too much to serve on the committee, that his fellow committee members decided to approach Osaka – a bi-racial tennis player who was born in Japan – about lighting the flame, the Daily Beast reports, and she accepted.

But they also found a role for Matsui – as a torchbearer. 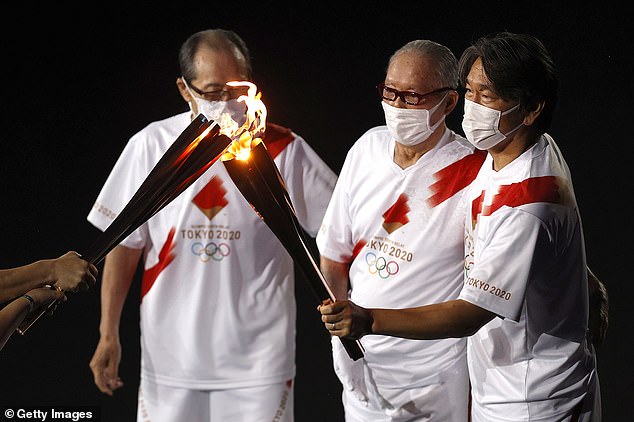 Matsui, center, was still able to serve as a torchbearer in the opening ceremonies 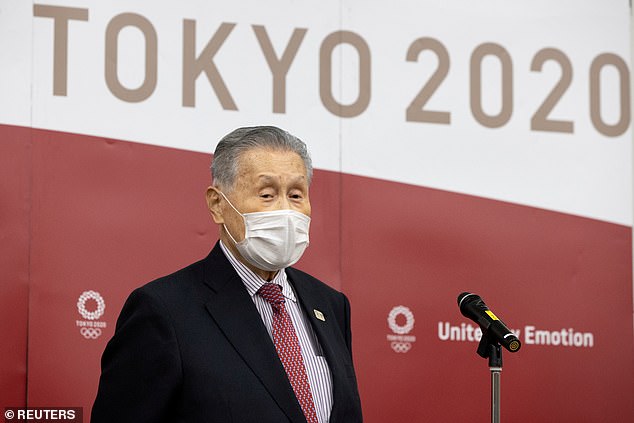 Mori resigned in disgrace from his position as chairman in February, after seeming to claim that women should not serve on the committee because they would talk too much

Mori stepped down from his role in the Japanese Olympic Committee more than one week after he seemed to suggest women talk to much in meetings.

The 83-year-old former prime minister made the offensive remark after an executive meeting that was streamed online on February 3, when he addressed efforts to increase female representation on the panel by expressing concern that meetings would drag on because the female members would vie against each other to speak the longest, the New York Times reported at the time.

He apologized for his remarks the next day, but over time pressure for him to resign grew both in his country and internationally, with the International Olympics Committee – which had previously called the issue ‘closed’ after his apology, later saying Mori’s remark were ‘absolutely inappropriate.’

Mori officially resigned the following Friday, saying: ‘Just when we were preparing to definitely hold the Games, I, as president said something I shouldn’t have said.’

He claimed he ‘didn’t mean it in that way, although it was said to be discrimination against women,’ it was instead meant to uplift women.

‘I have been praising women, promoting them to speak out more,’ Mori said, adding he believed he was unfairly criticized due to his age.

‘Old people are also doing well for the sake of Japan and the world,’ Mori said. ‘I feel extremely unhappy that older people said to be bad.

‘But it may go nowhere if I complain.’