Ousted Tennessee vaccination chief did NOT mail herself a dog muzzle, Amazon says

Tennessee’s ousted vaccine chief who was accused of mailing a dog muzzle to herself as part of an intimidation hoax appears to have been vindicated after Amazon said a credit card she reported lost last year was used to make the purchase from a fake account set up in her name in Washington state.

Dr. Michelle Fiscus was the top state health official in charge of Tennessee’s vaccine rollout when she was fired in July in what she said was a political move by state Republicans angered by a memo she sent arguing that minors can be vaccinated without parental permission.

Shortly before her removal, she a received a package containing the dog muzzle in the mail, and quickly gave national interviews to CNN and the New York Times, touting the dog muzzle ‘threat’ as evidence of her political persecution.

On Thursday, Amazon confirmed through a spokesperson that the account which had ordered the muzzle was fraudulently created by an unauthorized person who had used Fiscus’ credit card, according to the Charlotte Observer.

‘The Tennessee Department of Safety failed to thoroughly investigate this incident. I look forward to understanding the rest of the story, including the sender of the muzzle and the motives behind the State of Tennessee’s continued obstruction of our efforts to discover the truth,’ Fiscus told to WSMV after Amazon’s confirmation appeared to support her side of the story.

Shortly before her firing, Dr. Michelle Fiscus (pictured) claimed someone anonymously sent a dog muzzle to her state office through Amazon in the mail in an attempt to intimidate her 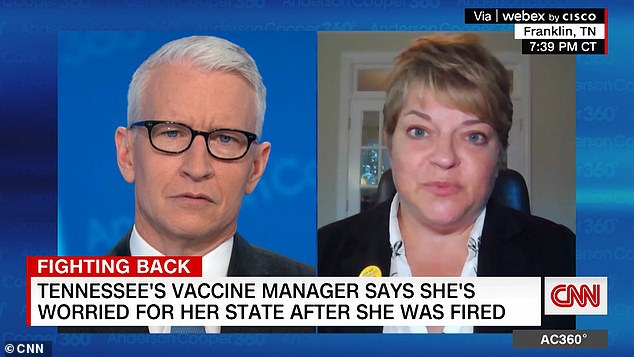 During an appearance on CNN, Fiscus told Anderson Cooper there was no note to accompany the package, and that Amazon refused to reveal the sender

Fiscus had asked for an investigation into the muzzle controversy.

‘At first, I thought that was a joke and contacted a few friends, and then, when no one claimed it, I realized that that was something that was sent to me as some kind of a message,’ Fiscus told CNN.

After an investigation, however, the Tennessee Department of Safety and Homeland Security found that the muzzle had been ordered using her credit card, and Fiscus was accused of orchestrating a hoax to drum up sympathy.

‘Hold tight. No I did not send it to myself,’ Fiscus insisted on Twitter after the findings of the investigation emerged in mid-August.

‘Regarding the muzzle: I ASKED Homeland Security to investigate the origin,’ Fiscus wrote, pointing to evidence that the Amazon account used to send the muzzle had been created in Washington state.

The Tennessee Department of Safety and Homeland Security investigation had found the package containing the muzzle traced back to an Amazon account in Fiscus’ name.

Following questions from investigators, Fiscus provided information for an Amazon account in her name which was a different account than the one used to purchase the muzzle.

Investigators subpoenaed Amazon for information on all accounts associated with Fiscus, and found that the credit card used to purchase the muzzle was the same card associated with her primary Amazon account. 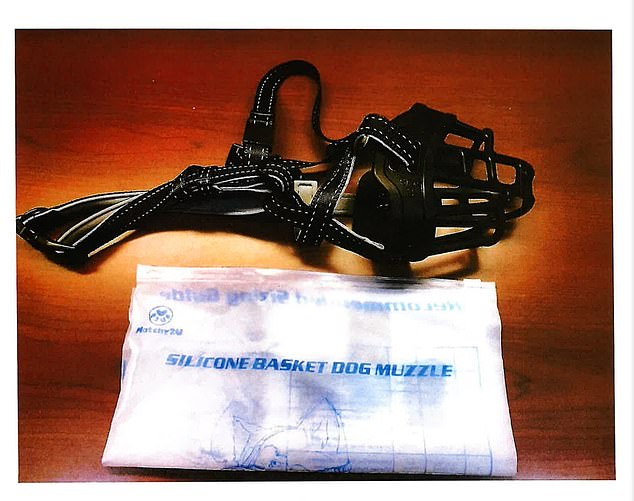 The muzzle is seen in an evidence photo by state investigators, who determined that the muzzle was purchased with Fiscus’ own credit card and closed the case 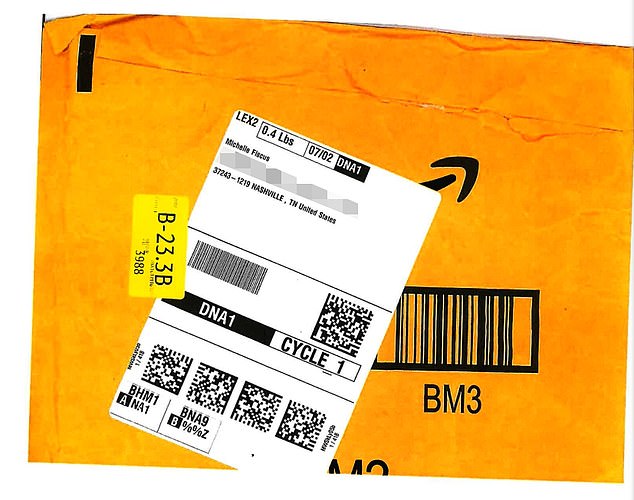 ‘The results of this investigation indicate that purchases from both Amazon accounts were charged to the same American Express credit card in the name of Dr. Michelle D. Fiscus,’ an investigative report stated.

‘At this time, there appears to be no threat toward Dr. Fiscus associated with receipt of the dog muzzle. This case is closed,’ wrote Special Agent Mario Vigil.

Fiscus pointed to data (above) showing the Amazon account used to send the muzzle had a login history in Washington state, saying that it showed her innocence

However, the Amazon account used to send the muzzle showed a login history from Washington state in March of this year, which Fiscus pointed to as evidence that she did not create the account.

According to recent emails to Fiscus from Amazon, however, the company wrote that,  ‘We believe that an unauthorized party has registered an account with your AmEX ending in 2008,’ according to WSMV. 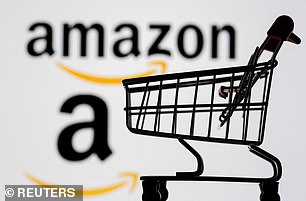 In exchanges with American Express, a representative with credit card company reported that the card number ending in 2008 was associated with a card she had reported lost in 2020, WSMV also reported.

At the time she received the muzzle, Fiscus was already facing political heat over her push to vaccinate kids over 14 without parental permission.

In July, Fiscus said she was presented with a letter of resignation and a letter of termination amid scrutiny from Republican state lawmakers over her department’s outreach efforts to vaccinate teenagers against the virus. 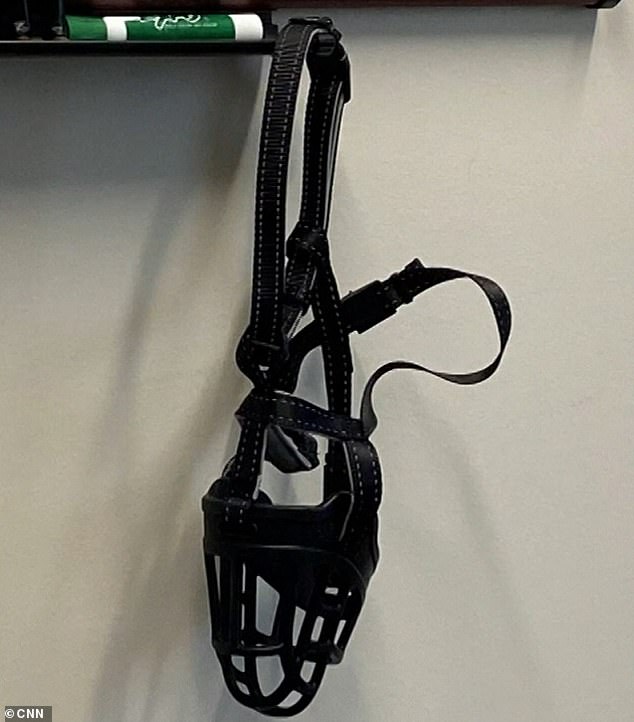 ‘At first, I thought that was a joke and contacted a few friends, and then, when no one claimed it, I realized that that was something that was sent to me as some kind of a message,’ Fiscus said of the muzzle (pictured)

Fiscus, who was the medical director for vaccine-preventable diseases and immunization programs at the Tennessee Department of Health, chose to be fired and said she was not given a reason for her ouster.

But the expert added that she believes her termination came because she sent out information on May 10 about the mature minor doctrine, according to News Channel 5.

‘I was told that I should have been more ‘politically aware’ and that I ‘poked the bear’ when I sent a memo to medical providers clarifying a 34-year-old Tennessee Supreme Court ruling,’ Fiscus said.

‘I am not a political operative, I am a physician who was, until today, charged with protecting the people of Tennessee, including its children, against preventable diseases like COVID-19.’

The doctrine is a rule of law in the US and Canada arguing that an unemancipated minor may have the maturity to choose or reject health care treatment without the knowledge of their parents, and should be allowed to do so. 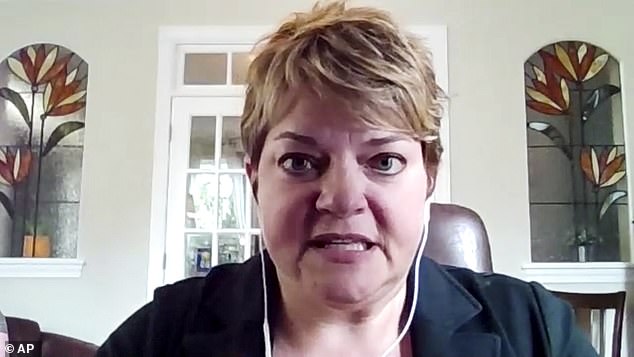 In a June committee meeting, Republican lawmakers criticized the letter that she was told had been ‘blessed by the governor’s office’.

Tennessee has one of the lowest vaccination rates in the country. Only 45 percent of the state’s nearly seven million residents are fully vaccinated against COVID-19.

Republican lawmakers also admonished her agency for its communications about the vaccine, including online posts.

One graphic, featuring a photo of a smiling child with a Band-Aid on his arm, said: ‘Tennesseans 12+ are eligible for vaccines. Give COVID-19 vaccines a shot.’

During the hearing, Republican Rep. Scott Cepicky held a printout of a Facebook ad touting eligibility for teens and called the agency’s advocacy ‘reprehensible,’ likening it to peer pressure.

Asked about the hearing last month, Gov. Lee said generally that the state will ‘continue to encourage folks to seek access – adults for their children, and adults for themselves to make the personal choice for vaccine’. 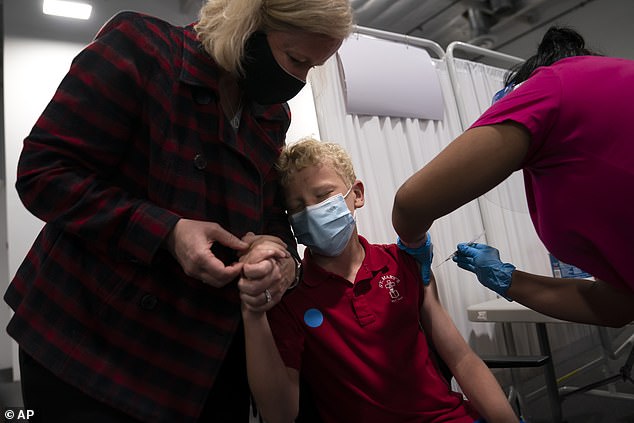 The firing of Fiscus came amid scrutiny from Republican state lawmakers over her department’s efforts to vaccinate teenagers against COVID-19. Pictured:  Boy, 12, is given COVID jab on May 13

Two weeks after the hearing, the Health Department told county-level employees to stop vaccination events aimed at teens and to halt online outreach to them, The Tennessean reported, citing emails it obtained.

She said health officials asked for permission to start messaging about how COVID vaccines would be safe, effective and well-studied – which was denied.

The governor’s office then controlled communication, while Fiscus added that the state’s public messaging began this May.

‘When the vaccines did finally become available, the messaging that came from the governor’s communication team was, ‘Talk to your doctor to see if COVID-19 vaccine is right for you’,’ Fiscus said.

‘We tried to explain that this is not a foot powder. This is the life-saving tool that we have to fight this pandemic and that we should be strongly encouraging people to get vaccinated.’

Following the scrutiny from Republican state lawmakers, Fiscus said she was given both a resignation letter and a termination letter on Monday, but chose to be fired claiming she ‘didn’t do anything wrong’.

Fiscus then penned a blistering 1,200-word response to the decision in which she fumed that she is ashamed of Tennessee’s leaders and afraid for her state.

‘I don’t think they realized how much of an advocate I am for public health and how intolerant of injustice I am,’ Fiscus told The Associated Press on Tuesday.

She said she was ‘angry for the amazing people of the Tennessee Department of Health who have been mistreated by an uneducated public and leaders who have only their own interests in mind.’

Fiscus also claimed that the Tennessee Department of Health has halted all outreach efforts around any kind of vaccines for children, not just COVID ones, which  confirmed through department documents.

The decision to end vaccine outreach and school events came from Health Commissioner Dr Lisa Piercey, according to the publication.

The Health Department will still send postcards reminding adults to get their second dose of the COVID vaccine, but teenagers will be excluded from the mailing list so it is not interpreted as ‘solicitation to minors’.

Some Democrats criticized the firing, with state Sen. Raumesh Akbari alleging that Fiscus was ‘sacrificed in favor of anti-vaccine ideology.’

House Speaker Cameron Sexton was one of few Republicans to weigh in, saying through a spokesperson that health officials made the decision internally.

Sexton’s spokesperson, Doug Kufner, said: ‘While members have expressed concerns about the department’s recent vaccine marketing strategy, Speaker Sexton will not speculate on the factors that went into this decision.

‘However, Speaker Sexton does believe that those who have voiced their dissent agree with yesterday’s outcome.’

Meanwhile, Republican state Sen. Richard Briggs, a physician, said he’s unsure why Fiscus got fired, but added that ‘it would be wrong if the reason for her firing was because she had a campaign to try to get our children vaccinated’.

He said he doesn’t want to second-guess the department, but ‘because of the way it at least looks superficially without the details being known, there probably needs to be some clarification’.