Evidence is mounting of a worsening outlook for the British economy as fresh data showed wage growth dwarfed by inflation and a weakening job market.

The Office for National Statistics revealed that in real terms, regular pay in the year to June fell by a record 3 per cent when adjusted for soaring inflation, which experts warn will deepen recessionary factors as a result of weakened demand.

In signs of cooling in Britain’s tight labour market, ONS figures also showed the number of people in employment grew by 160,000 between April and June, falling short of expectations of 256,000, while the number of vacancies fell for the fist time since the third quarter of 2020.

Analysts say today’s ONS figures increase the likelihood that Governor Andrew Bailey and the Bank of England will hike interest rates by another 0.5 percentage points next month

The Bank of England warned earlier in August that October’s energy price cap hike will kick off a five-quarter recession, with the GDP shrinking in every three-month period to the start of 2024.

Chief market analyst at financial brokerage XTB, Walid Koudmani said the marginal 0.1 percentage point increase in the unemployment rate to 3.8 per cent over the three months to June ‘is troubling news as it could indicate a slowdown in the job market which coupled with rising prices may lead to a serious drop in demand and ultimately impact most aspects of the economy’.

He added: ‘The economy continues to be in a difficult spot as it remains stuck between serious supply and logistics concerns and attempting to rebound from historically low interest rates.’

Inflation hit a 40-year high of 9.4 per cent in June, with expectations it could exceed 13 per cent by year-end, and the Bank of England is hiking interest rates in efforts to return price increases to its target of 2 per cent.

It raised interest rates from 1.25 per cent to 1.75 per cent earlier in the month, the biggest jump for 27 years, and today’s figures increase the likelihood that the bank will go ahead with another 0.5 percentage points increase in September. 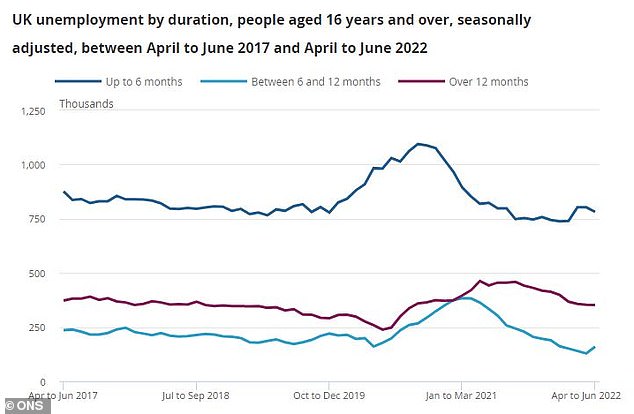 The unemployment rate for April to June 2022 increased by 0.1 percentage points on the quarter to 3.8% 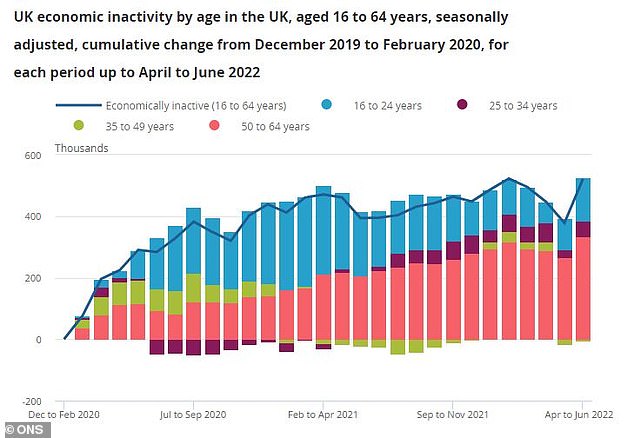 Thomas Pugh, economist at audit, tax and consulting firm RSM UK, said that while real wages are being crushed by inflation, the underlying growth in pay will leave the BoE concerned about further inflationary pressure.

‘But bonus payments have been volatile lately and the MPC prefers to look at underlying pay growth, which rose strongly.

‘Indeed, pay growth rose rapidly in every industry except for the public sector. Add in employment growth of 160,000 and it paints a picture of a very tight labour market.

‘Combine this with soaring inflation, which is likely to have reached almost 10 per cent in July, and we think a 50bps hike next month is now more likely than not.’ 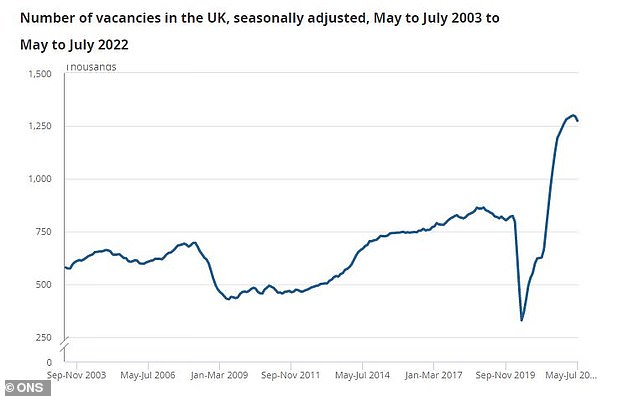 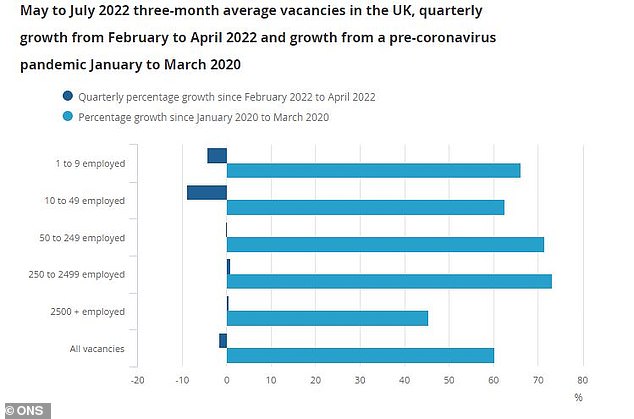 The fall in vacancies was primarily among smaller companies 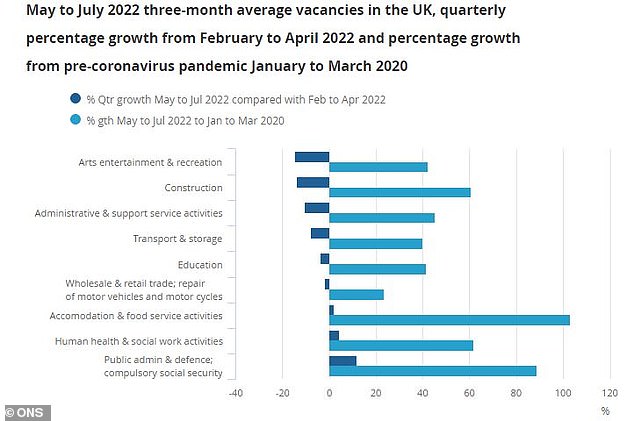 Despite concerns of cooling, Chancellor Nadhim Zahawi was encouraged by today’s figures, which he said painted a picture of a UK jobs market ‘in a strong position, with unemployment lower than at almost any point in the past 40 years’.

He added: ‘This highlights the resilience of the UK economy and the fantastic businesses who are creating new jobs across the country.’

But senior investment and markets analyst at Hargreaves Lansdown Susannah Streeter pointed to the sharp decline in vacancies as an indication of a worsening outlook.

She said: ‘Already it seems companies are being more cautious in their hiring, with a recession set to take hold in the UK amid the energy crisis, with consumers struggling to pay mounting bills.’

‘The 3.8 per cent unemployment rate remains near a generational low but has bottomed and is set to rise as the economy and labour market cool further.

‘Average wages rose 4.7 per cent, nearly five points below inflation. This is one of the sharpest cuts to inflation-adjusted incomes in history, and further squeezes UK living standards.

‘The cooling jobs market will be painful for many, but also holds out the hope for lower inflation pressures and Bank of England rate rises ahead.’ 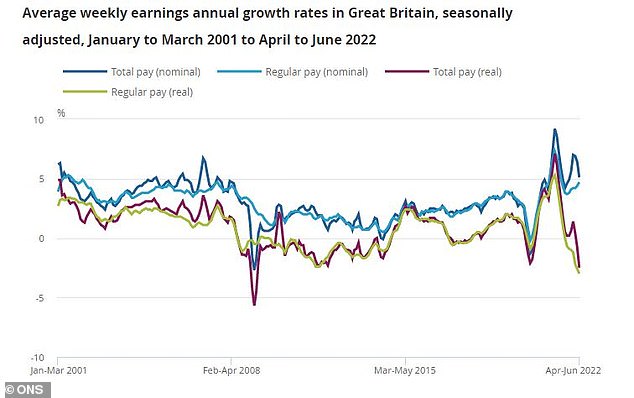 Both real total and regular pay fell on the year, with a record fall for real regular pay