‘If he had that money do you think he’d be sleeping there?’ Outrage as a homeless man is slapped with a $652 fine for spending the night in a bus shelter

A homeless man has been slapped with a $652 fine for sleeping under a bus shelter in Queensland, sparking outrage online.

The 50-year-old was given an infringement notice by a Gold Coast City Council officer for ‘illegal camping’ at the Warner Street bus shelter in Coolangatta on November 25 at 2.26am.

‘This is totally rubbish, as in human rights you can’t fine someone for sleeping when he has no home,’ the homeless man said.

Another user implied the officer’s actions were hypocritical.

‘So you can fine a homeless man but you don’t fine the families who decided to take a free holiday camping & taking over Tallebudgera Creek for nearly a week!! Just doesn’t make sense!!’ she wrote.

‘If he is homeless how on earth is he to pay a fine like that. Maybe we need more homeless shelters instead of erecting stupid Gold Coast lights on the highway that you can’t even read,’ a user said.

The infringement notice also stated the 50-year-old lived rough between Pottsville and Coolangatta.

The man has said he will challenge the fine.

‘They can tell them to move on but where are they moving on to? There needs to be places for them to go,’ he told the Gold Coast Bulletin. 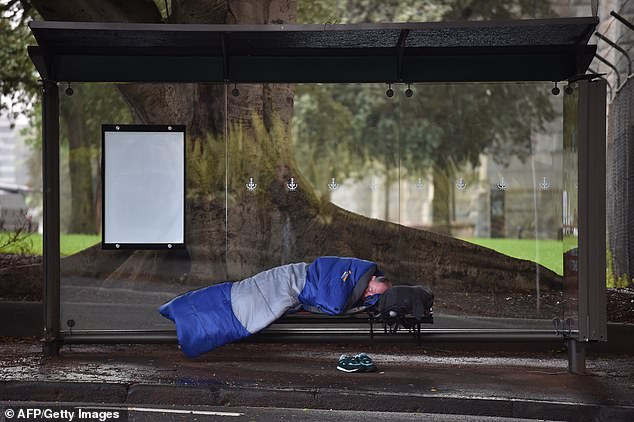 But a council spokeswoman said they would never issue fines unless they knew they had somewhere else to go.

Another homeless man and his two dogs were reportedly living in disabled toilets at Rainbow Bay and Greenmount.

A police spokeswoman said they were aware of the man in the Rainbow and Greenmount area ‘and have been working to put him in touch with relevant agencies for assistance’.

But he said nothing is being done about it.