A man who has dressed up as Santa for a Christmas parade for the last five years has been controversially dumped just days before the festival.

Neville Baker, who runs the company My Santa, was slammed by parade organisers after revealing he would never hire a woman to play the role of Santa Claus.

‘Putting politically correct things to one side, there’s a certain character people expect to find when they come to meet Santa,’ he told the Herald on Sunday.

Days later, the organisers of Auckland Farmers Santa Parade revealed they would not be hiring Mr Baker for the role after his ‘inappropriate comments’.

Hundreds of furious social media users took to the internet to slam the parade for their decision.

‘Santa is not a woman, never has been and I certainly hope I never see the day he is a woman. The world is going nuts,’ one person wrote.

‘I’m against discrimination but I feel in this instance he was right. You can’t hire a female to play ‘father’ Christmas. You would have a lot of confused children,’ one user wrote.

‘I’m all for equal rights and inclusiveness but come on @FarmersNZ !! What next- can an elephant apply to be a tooth fairy? They can’t fly!’ another user wrote.

Others called for a boycott of the parade over the decision to dump Mr Baker. 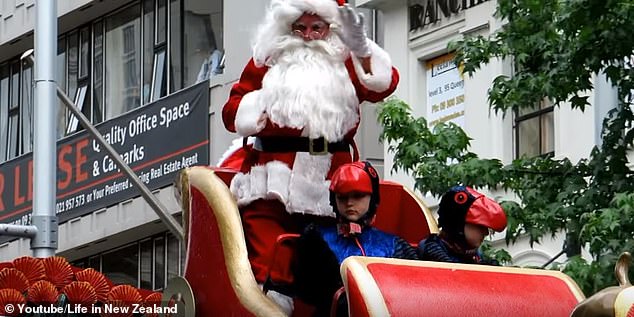 ‘We are distancing ourselves from this company,’ Mr Barnett told NZME.

While several users said they were against discrimination and for equal rights, many admitted a woman should not be hired for the role of ‘Father Christmas’.

While many users said they were against discrimination and favoured equal rights, they admitted a woman shouldn’t play the role