YouTube star Myka Stauffer’s subscriber count has plummeted in days following her controversial announcement that she has ‘rehomed’ her five-year-old adopted son Huxley.

The 33-year-old mother sparked outrage when she revealed in a video posted to her YouTube channel last month that she and her husband James had placed their autistic son, who is from China, with a new family.

Since then, the Ohio-based influencer has found herself at the center of a bitter backlash that has seen her lose a number of endorsement deals, brand partnerships – and now, followers. 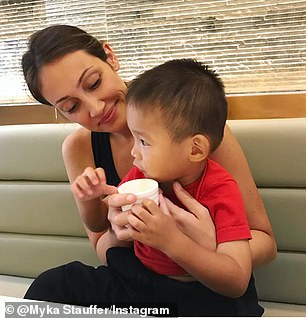 Going down: The 33-year-old now has just over 700,000 subscribers on YouTube, where she posted a video last month revealing that she and husband James had given up Huxley 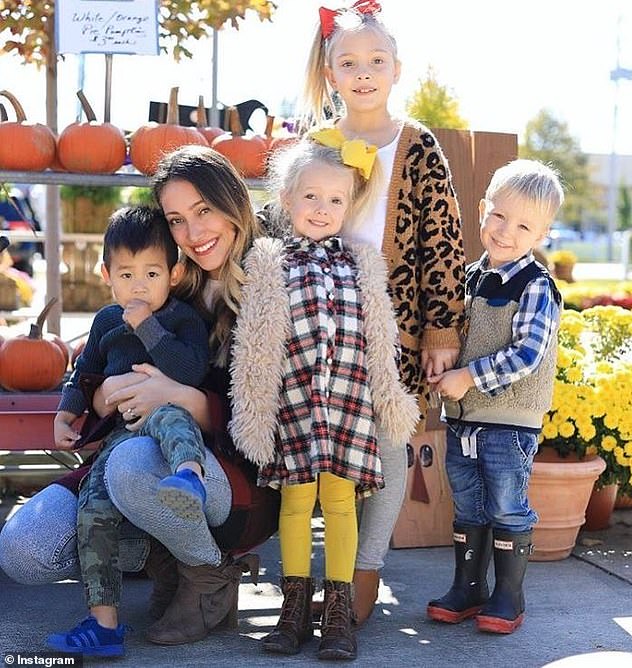 Upset: As of Tuesday, it appeared that Myka had scrubbed all images of Huxley (left) from her Instagram account, leaving only pictures of her four biological children

YouTube analytics show that Myka’s subscriber count has dropped by a staggering 15,750, bringing her total number to just over 700,000.

Myka does seem to be receiving more positive feedback on Instagram however, where her follower count has gone up by at least a few hundred people in recent days – despite the fact that she appears to have scrubbed all images of Huxley from the account, which now boasts 205,000 followers.

The news about Myka’s dropping subscriber count comes just after it was revealed that authorities in Ohio launched an investigation into the whereabouts of Huxley, after receiving ‘several inquiries regarding the welfare’ of the little boy, who turned five on June 1.

Tracy Whited, a spokesperson for the Delaware County Sheriff’s Office, released a statement on Wednesday, saying the agency confirmed the special-needs youngster, whom the Stauffers adopted from China in October 2017, had been given up for adoption again – while revealing that the Stauffer family was the subject of an investigation.

Whited added that the authorities will be looking into the welfare of Myka and James’ four biological children as part of their investigation.

‘This child is not missing,’ she stated. ‘Our primary concern is for the well-being of this child, as well as the other children in the household. Our investigation is ongoing, and will include contact with all children to ensure their safety.’

The representative of the sheriff’s office said in the statement that investigators are ‘confident’ that the Stauffers and Huxley’s new family are following the ‘appropriate process’ to finalize the adoption, including home studies, background checks and ‘specific requirements and safeguards.’

Whited added: ‘In addition, both parties are being represented by attorneys to ensure full compliance with the court process.’

Myka and James shared a tearful video last month, revealing that they had ‘rehomed’ Huxley because he has needs that they were not equipped to meet. 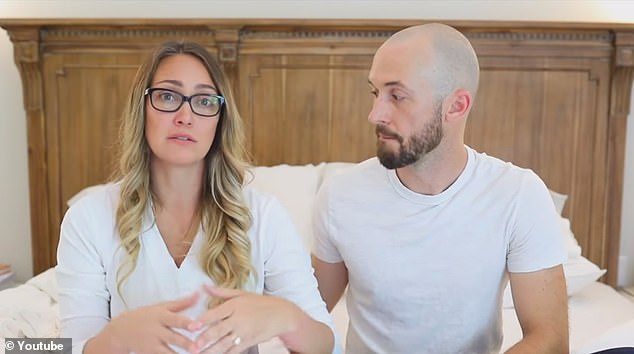 Controversy: It was revealed this week that authorities in Ohio were investigating the Stauffers after receiving ‘several inquiries regarding the welfare’ of Huxley, who was born in China 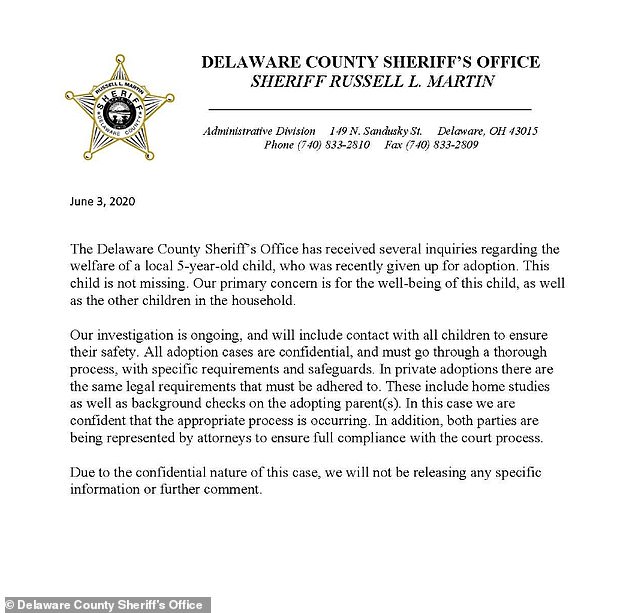 Update: The Delaware County Sheriff’s Office on Wednesday released this statement addressing its investigation into the Stauffer family

The mother-of-four has previously stated that the toddler has autism and brain trauma, and required a lot of specialized care.

She added that an adoption agency had helped place Huxley with his ‘forever family’.

The parents did not elaborate on where Huxley had gone, nor did they explain the process by which the child was matched with, and handed over to his new family.

However in a since-deleted comment posted under the clip, Myka went on to claim that ‘multiple scary things happened inside the home towards our other children’, suggesting that this was one of the key reasons behind their decision to give up Huxley.

‘We would never just give up a child with special needs, this is a personal matter to Hux it had nothing to do with he just had Autism,’ she wrote.

‘Multiple scary things happened inside the home towards our other children, and if these events happened with one of my biological kids, after all the help and after the behaviors we witnessed sadly we would have no other choice then to seek help and get their needs met.’

The mom went on to insist that rehoming Huxley was what was best for him and something he wanted.

‘Huxley wanted this descion [sic] 100% we saw that in family time with other poeple [sic], he constantly chose them and signed with and showed tons of emotion to show us and let us know he wanted this,’ she explained. ‘Huxley never had a say in his adoption, and he needed more help and also wanted this and we know that 100%.’ 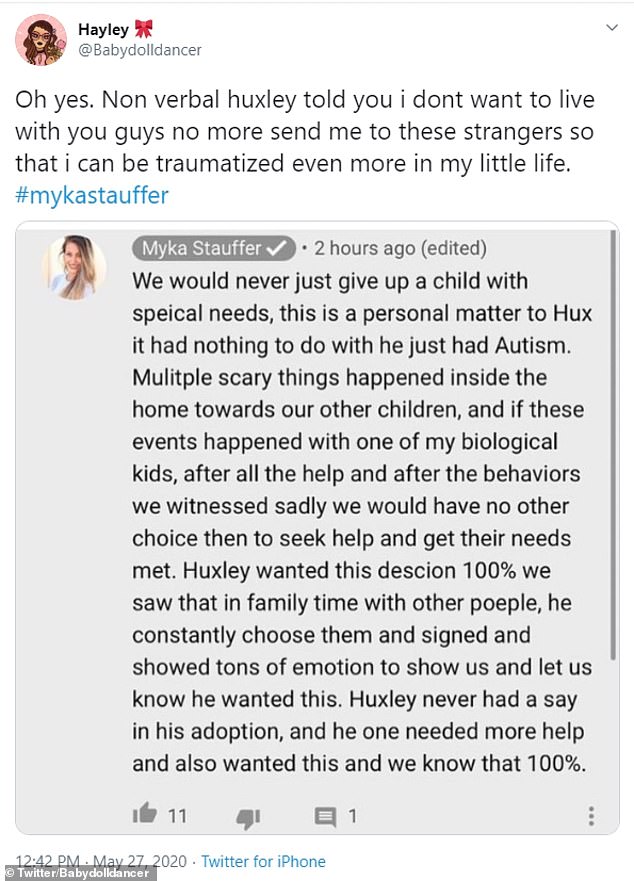 Response: After coming under fire for her announcement, Myka allegedly responded in the comments. The message appears to have been deleted but is now circulating online 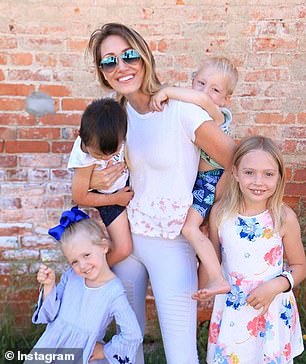 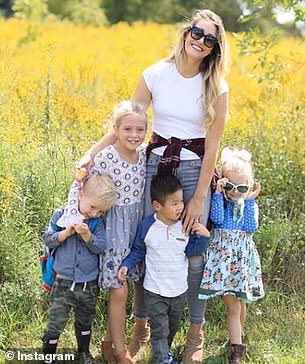 End of the road: Several brands have dropped Myka as a partner, including Kate Hudson’s fitness brand Fabletics

The couple’s lawyers, Thomas Taneff and Taylor Sayers, told People that Myka and James ‘are very caring parents that would do anything for their children,’ but ‘this was the best decision for Huxley.’

They explained that the couple had consulted multiple healthcare and education professionals since his adoption and were advised ‘it might be best for Huxley to be placed with another family.’

Many questions remain unanswered at this time, including: where is Huxley? Who helped the Stauffers transfer him to the new family? Have the new parents been vetted by anyone?

When the Stauffers brought Huxley home from China in October 2017, Myka documented his international adoption on her YouTube channel, which now has more than 700,000 subscribers.

Myka also wrote about Huxley’s adoption and his special needs. In a piece she had penned for Parade in September, she said that they were surprised when they came home with their adopted son and realized his file was ‘inaccurate.’

‘Our son ended up having a stroke in utero, has level 3 autism, and sensory processing disorder,’ she wrote. ‘It took a lot of time to process and to readjust to his new diagnosis.’

She shared that Huxley receives ’30 hours of ABA [Applied Behavior Analysis] in-home therapy a week and goes to private preschool’ to help with his needs.

‘He is a great kid and his condition doesn’t involve that much overall care—all you need is a big heart and practice patience every day,’ she said.