Ironwomen have accused Surf Live Saving Queensland of sexism, saying they were snubbed during the finals.

She started an online petition in response, demanding equal treatment for male and female competitors.

‘Surf Life Saving Queensland displayed a lack equality during the U15 Ironwoman and Ironman finals,’ she wrote in her petition.

‘With 16 females competing in the final, they were called to the line as a group and set off for their race.’

‘Following this, 16 males were called for their race individually with their names over the loud speaker, were filmed with professional camera and were displayed on social media,’ she said.

According to Ms Gooderham, the Ironwomen didn’t receive the recognition they deserved.

‘The weekend after International Women’s Day, it is saddening to see the lack of equality in such an admired sport,’ she said.

Almost 800 people have signed the petition on charge.org and many have shared their concerns about similar incidents. 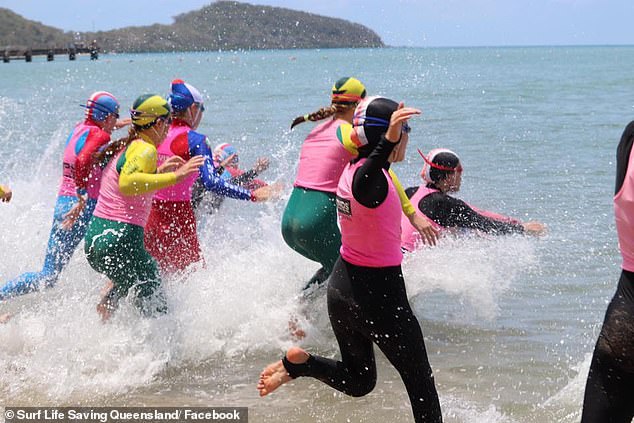 One person commented: ‘This is a matter of basic respect and courtesy to treat all competitors equally. Tradition is no excuse. Time to move out of the dark ages Surf Lifesaving Queensland.’

‘I have witnessed ongoing discrimination and bullying of a female surf sports athlete at both club and state level. It’s not ok,’ another said.

Surf Life Saving Queensland have claimed there are more than 1600 nippers that compete and the busy schedule has meant time is limited.

‘While we attempt to highlight all events, we do unfortunately have to alter commentary of our Youth Championships between multiple competition areas with events occurring concurrently, and in very quick succession.’

‘We look forward to working with all members moving forward to help continuously improve on the running and success of our pinnacle youth event,’ a spokesperson said.

‘We thank Ella for her valuable feedback, which will be implemented in the future to ensure all of our events receive the recognition they deserve.’