The parents of a girl who passed away of a brain tumor are outraged after they received a medical bill in her name three years later.

Katherine ‘Katie’ King, from California, was diagnosed with a tumor known as Diffuse Intrinsic Pontine Glioma (DIPG) in June 2015.

Her parents, Jaime and David, contacted several hospitals and doctors for treatment options – all of whom said there nothing that could be done.

In June 2016, one year after her diagnosis, Katie died. Her parents shared a heartbreaking video of her final moments.

On Monday, they revealed that their insurance company, Aetna, had sent them an overpayment check and – rather than address it to either her mother or father – it was addressed to Katie.

Katherine ‘Katie’ King, from California, was diagnosed with a tumor known as Diffuse Intrinsic Pontine Glioma (DIPG) in June 2015 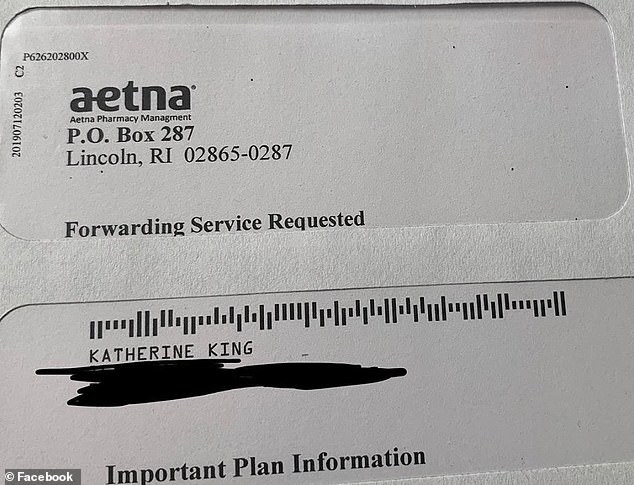 On Monday, three years after Katie passed, her parents received an overpayment check from Aetna addressed to her (pictured) 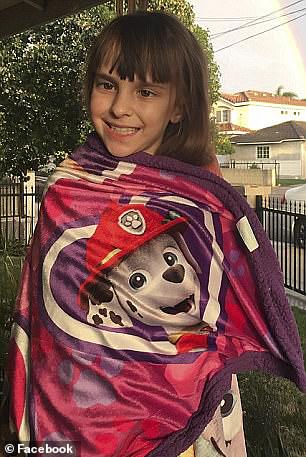 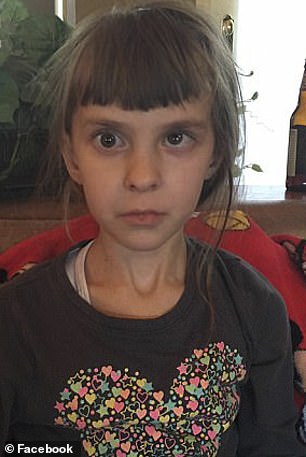 DIPGs are rare and inoperable brain tumors with a two-year survival rate of 10 percent. Katie (left and right) was given nine months to live, but died a year later in June 2016

Jaime shared the photo on Facebook, along with a caption in which she expressed her indignation.

‘Our insurance company took three years to cut an overpayment check for Katherine’s medical costs. Three years. And then…they sent that check to us in HER name. What is wrong with people?’ she wrote.

‘She was 7. She died 3 years ago. She’s not been medically covered by anyone in three years. Maybe her parents don’t want to receive a check for their dead child in their dead child’s name. Maybe her guardians should be listed???’

Jaime said David contacted the banker, who immediately direct deposited the check into their account.

‘[David] was visibly upset and we both were kind of numb the rest of the day,’ she wrote.

HOW TO SPOT A DIPG TUMOR

DIPG (Diffuse Intrinsic Pontine Gliom) is a malignant brain tumor that grows quickly and is likely to spread.

DIPGs are glial tumors, meaning they arise from the brain’s glial tissue – tissue made up of cells that help support and protect the brain’s neurons

They are found in a lower part of the brain stem called the pons.

The pons is responsible for a number of critical bodily functions, such as breathing, sleeping and blood pressure.

DIPGs account for 10 percent of all childhood central nervous system tumors. Between 200 and 300 children in the US are diagnosed each year, usually between the ages of five and nine.

The symptoms of DIPG usually develop very rapidly prior to diagnosis, reflecting the fast growth of these tumors.

The most common symptoms include:

Surgery to remove the tumor isn’t always an option due to the dangers of operating on critical areas of the brain. Radiotherapy tends to be the standard form of treatment.

The prognosis for DIPGs remains very poor, although a small percentage of patients survive this disease.

Only 10 percent of children with DIPG survive for two years following their diagnosis, and less than one percent survive for five years.

Katie’s first symptom of her tumor began with a lazy left eye in early 2015. She then began having fevers difficulty walking, difficulty talking and balance issues in April.

‘We started noticing the eye thing very early in 2015. You could see in photos that her eye was sort of off,’ Jaime told DailyMail.com in 2017.

Most doctors dismissed Katie’s symptoms and said they would improve on their own.

In mid-May, the Kings went to an optometrist, who unofficially diagnosed Katie with a brain tumor.

‘The optometrist said: “I’m not qualified to give you a diagnosis. Basically your daughter sees 20/20 but her brain is telling her she’s seeing double, this is serious”. I was sat there crying in the office,’ Jaime said.

‘She went to speak to her colleague, then came back and said: “You need to go to the hospital, but you’re not going to get anywhere with a referral from an optometrist. It’s better if you go back to your doctor, tell him exactly what I just told you, and get him to refer you”.’

The pediatrician refused so, after a few weeks, Katie’s parents took her to the hospital on their own.

In the first week of June, she was diagnosed with DIPG.

The tumor is a very rare and highly aggressive form of cancer typically found in children between ages five and nine.

This type of tumor is located at the base of the brain and the top of the spine, but it is unknown what causes them.

The tumors put pressure on the area of the brain called the pons, which are responsible for a number of critical bodily functions, such as breathing, sleeping and blood pressure.

Some of the first symptoms of the tumor are problems with eye movement, facial weakness, difficulty walking, strange limb movements and problems with balance.

Most people with this type of cancer only live for nine months following the first diagnosis, and some don’t even make it long enough to receive radiation treatment.

Katie was given no more than nine months to live.

‘Your only option is radiation,’ Jaime said.

‘If you do trials they’re all phase 1, so the kid is pumped full of chemo[therapy] until they can’t take it anymore. Phase 2 is taking them to that limit.

‘We didn’t go that route because nobody with DIPG has ever survived it; there have been deaths from it, because their bodies can’t take it.’ 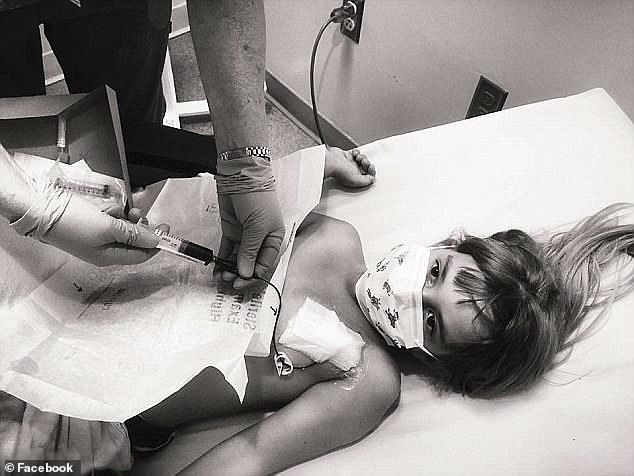 Shortly after her diagnosis, in July 2015, Katie received a dose of Avastin, a cancer-fighting drug that they hoped would control or shrink her tumor (pictured) 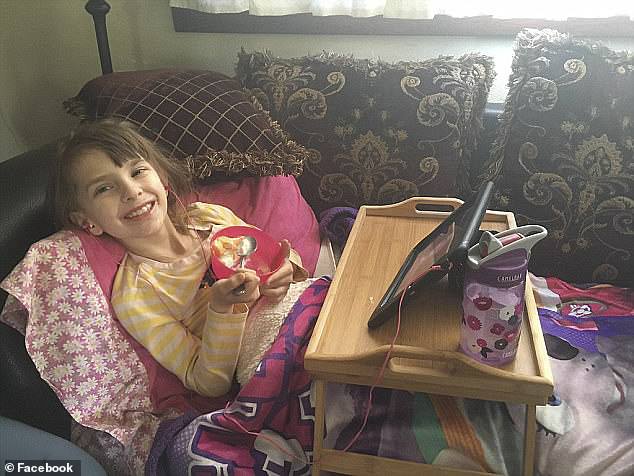 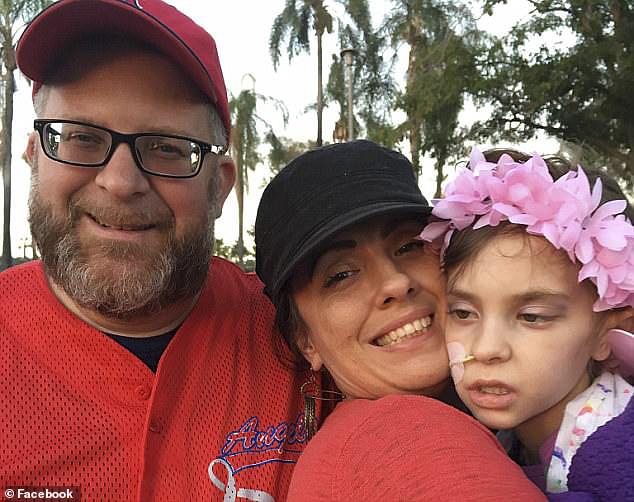 The video was shared on the one-year anniversary of Katie’s death in June 2017. Pictured, left to right: David, Jaime and Katie in late 2015

Her parents tried a few clinical trial drugs, but nothing helped shrink her tumor.

About seven months after her diagnosis, Jaime and David switched their research from how to save their daughter’s life to how to make her death as painless as possible.

However, doctors didn’t have any other answers and few DIPG families had shared the final moments of their children’s lives.

In the video, filmed in the last few minutes of her life, Jaime can be seen lying on a bed next to Katie, while David sits in a chair on the other side stroking her hair.

They tell her she will no longer be in pain or have to take medicine and soon she’ll be able to run, sing and dance.

The couple shared the video in June 2017, on the one-year anniversary of Katie’s death.

Jaime said there’s been a mix of support and blow-black from their decision and, sometimes, she’s not even sure it was the right one.

‘Sharing this was a violation of her privacy; exploiting her to show the truth of what all of our children who have died from cancer go through,’ Jaime said.

‘I regret it every day but I would do it again. This was me showing the truth.’