You’ve got to be squidding! Outraged US tourists are hit with a shocking $935 check for six plates of calamari, six beers, three salads, two bottles of water and a tomato juice at ‘rip off’ restaurant in Mykonos

A group of US tourists were left outraged after being presented with a $935 bill for a modest lunch of calamari and beers in Greece.

One of the diners, from Brooklyn, revealed how staff at the DK Oyster restaurant in Mykonos refused to give their party a menu or show them prices, before surprising them with the final tab.

Also on the bill were three Caesar salads which came to a total of $66.46, two bottles of water for $20.14 and a single tomato juice for the same amount.

Posting an image of the bill on Tripadvisor, user Ciscorock wrote: ‘Avoid this place, this place is a trap.

‘They charged us 830 euros for calamari, 6 beers and 3 salads. The staff is not honest and refuse to provide a menu and prices.

‘Avoid this place at all costs! No pun intended.’

The restaurant, located on the south of the island near Platis Gialos Beach, is generally well-reviewed, and holds an overall four-star rating. 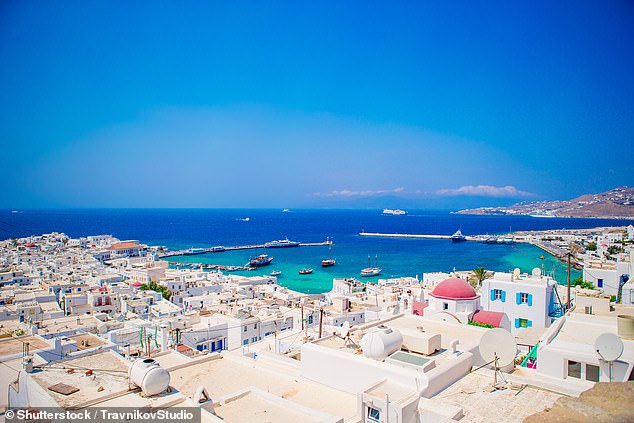 The visitor said staff refused to give them a menu or show prices before surprising them with the charges at the end of the meal (pictured, Mykonos)

But there have been a string of recent reviews in which people have posted images of their bills along with claims of being ripped off.

One bill shows the customer was charged $16 for a single Sprite, while another was hit by a $365 charge for a single dish – a Tomahawk USA steak.

Others complained that they were not even given bills, while some said the staff had been rude and abusive.