Ovarian cancer patient, 25, learns she can’t have children due to emergency hysterectomy

For five months, Shaylee Bedward hadn’t had a period.

Concerned, she went to visit her doctor in Bloomington, Indiana, in summer 2017, but was told it was simply a side effect of her contraceptive pill.

But as the months passed, she began experiencing severe abdominal pain and decided to have a pelvic examination in October of that year.

A mass was located on Bedward’s ovaries, and a subsequent ultrasound and blood test revealed the cause: stage 3 ovarian cancer.

Bedward immediately began chemotherapy, but when doctors saw it wasn’t working, they recommended a hysterectomy, which would remove her uterus and ovaries.

It would send the recent graduate into early menopause and leave her unable to have children.

Bedward, now 25 and still battling cancer, said the pain of learning she would never have the big family that she and her boyfriend had been planning was one of the hardest things she has ever had to endure.

But she is sharing her story to show other people in similar situations that she is powering through.

Shaylee Bedward, 25, from Bloomington, Indiana, visited her doctor in summer 2017 – worried that she hadn’t had a period in five months – but she was told it was simply due to her contraceptive pill. Pictured: Bedward undergoing chemotherapy 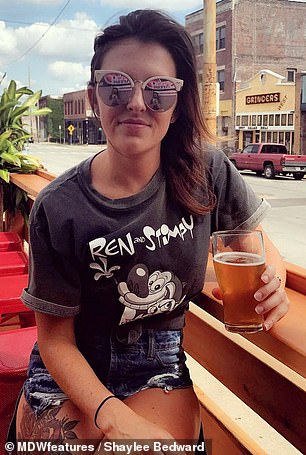 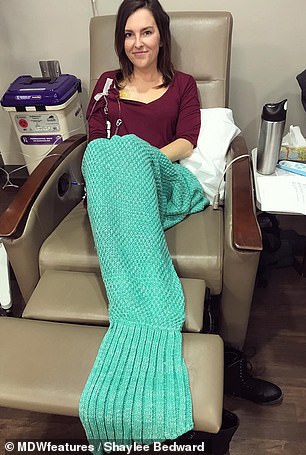 A mass was located on Bedward’s ovaries and she had an ultrasound and blood test, after which she was diagnosed with stage 3 ovarian cancer. Pictured: Bedward at her first round of chemotherapy in November 2017

‘Unfortunately, we weren’t able to preserve any of my eggs beforehand,’ Bedward said.

‘It was heartbreaking and devastating and every other awful word you can use to describe an experience.

‘Hearing the news that I can’t have children of my own is still the hardest thing I’ve ever had to go through.’

WHAT IS A HYSTERECTOMY?

A hysterectomy is a surgical procedure to remove a woman’s uterus.

There are three kinds:

The operation is most commonly performed on women between the ages of 40 and 49.

More than 20 million American women have had a hysterectomy, according to data from the Centers for Disease Control and Prevention.

As women approach menopause, the odds that they will develop one of several serious uterine health conditions increases. Doctors may recommend a hysterectomy as a treatment for:

In some cases, doctors may suggest a hysterectomy as a preventative measure if a woman has significant warning or early signs of developing one or more of these conditions.

When necessary, surgeons may also remove the ovaries and fallopian tubes, if these have also been damaged or are at serious risk of damage.

The removal of reproductive organs sends a woman’s body into menopause, no matter how old she is.

This comes with unpleasant side effects like hot flashes, and many women have to start hormone therapy, taking estrogen to balance out their own hormones.

Sometime hysterectomies just involve removing part of the uterus, or the entire uterus, and preserving other reproductive organs.

However, doctors said she needed a radical hysterectomy, which involved moving her uterus, cervix and ovaries.

Because the removal of her ovaries meant she was no longer producing estrogen, she was forced into early menopause, which took another toll on her body.

‘Lots of women can take medicine to regulate their hormones during menopause, but since ovarian cancer is often estrogen-receptive, I had to take pills that even further blocked any hormones from being produced,’ Bedward explained.

‘It affected more parts of my life than I ever could have imagined. I’m only 25 years old, but my body feels like it’s at least 60.’

Bedward admits that she was not expecting a cancer diagnosis when she went in for her original pelvic exam.

‘Cancer was honestly the furthest thing from my mind,’ she said.

‘I hadn’t even heard of ovarian cancer at this point. I received the HPV vaccine when I was 13 and honestly thought that meant I was immune to any type of gynecological cancer.’

It occurs when the disease originates from the cells in and around the ovary.

The cancer has been called the ‘silent killer’ because it is often diagnosed at an advanced stage when it has already spread to other parts of the body.

However, if caught in an early stage, a woman has a more than 90 percent chance of long-term survival. 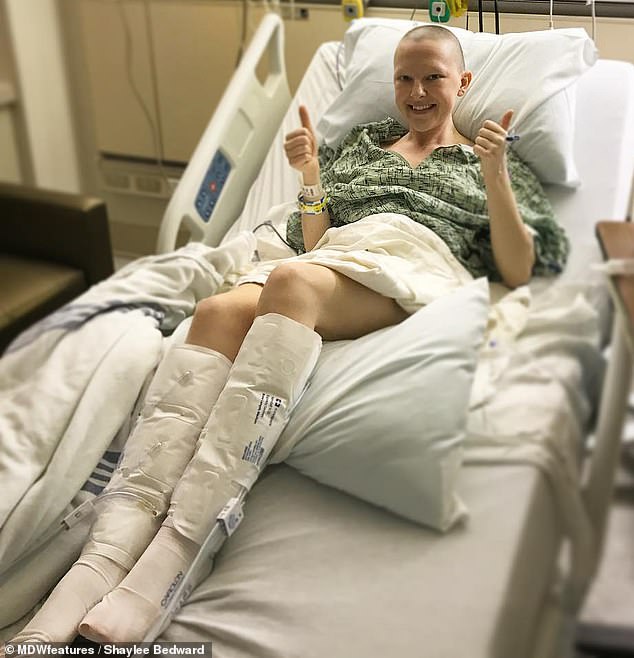 Ovarian cancer ranks fifth in cancer deaths among women. The cancer has been called the ‘silent killer’ because it is often diagnosed at an advanced stage when it has already spread to other parts of the body. Pictured: Bedward in the hospital 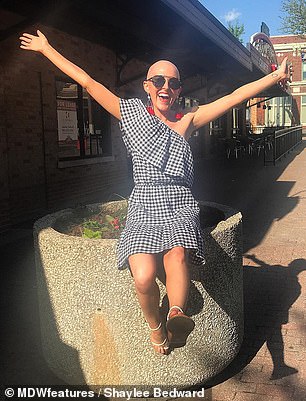 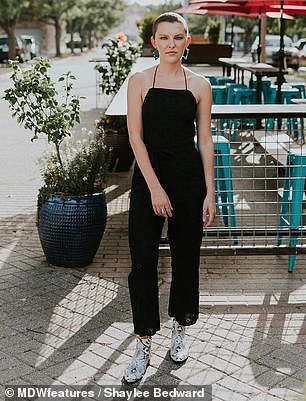 Doctors put Bedward (left and right) on chemotherapy infusions, which began in November 2017.  When chemotherapy didn’t work, doctors recommended a hysterectomy, which would remove her uterus and ovaries, in February 2018

Bedward underwent an exploratory laparotomy, a surgical procedure in which the abdomen is opened and the organs are examined so her cancer could be removed.

Once she healed from surgery, doctors began weekly chemotherapy infusions in November 2017.

‘I don’t even like taking Ibuprofen, so when I found out I’d be undergoing intense chemotherapy my heart sank,’ Bedward said. ‘I hated what I was about to put my body through.’

She said that chemotherapy left her incredibly fatigued and she experienced nausea and flu-like symptoms.

‘You ache constantly and feel flu-like for weeks at a time, you can hardly eat, you constantly worry about every twitch and immediately think of the worst-case scenarios,’ Bedward said.

‘Losing my eyelashes and eyebrows was even harder. I could rock the head scarves and turbans, but it’s impossible to feel sexy or feminine without a single eyelash.’

In February 2018, after doctors noted that chemotherapy wasn’t working, they recommended that she undergo a hysterectomy to remove her uterus and ovaries.

Because the removal of her ovaries meant she was no longer producing estrogen, Bedward went into early menopause at just 24 years old. 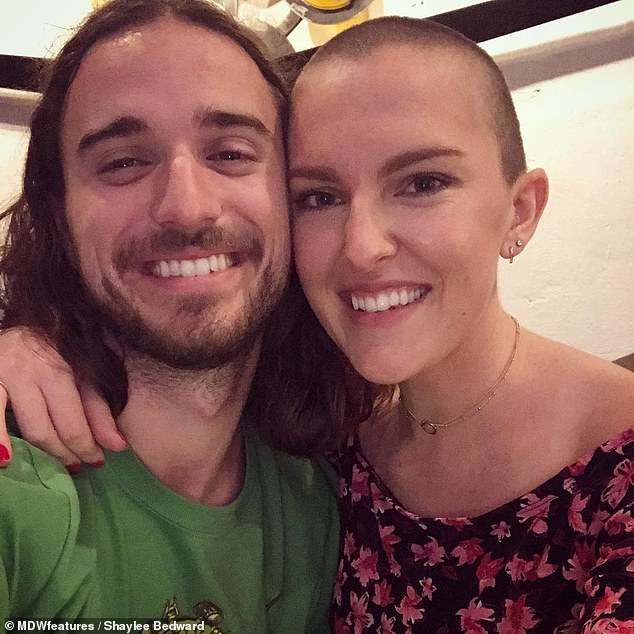 Because the removal of her ovaries meant she was no longer producing estrogen, Bedward went into menopause at 24 years old. Pictured: Bedward, right, with her boyfriend, Evan 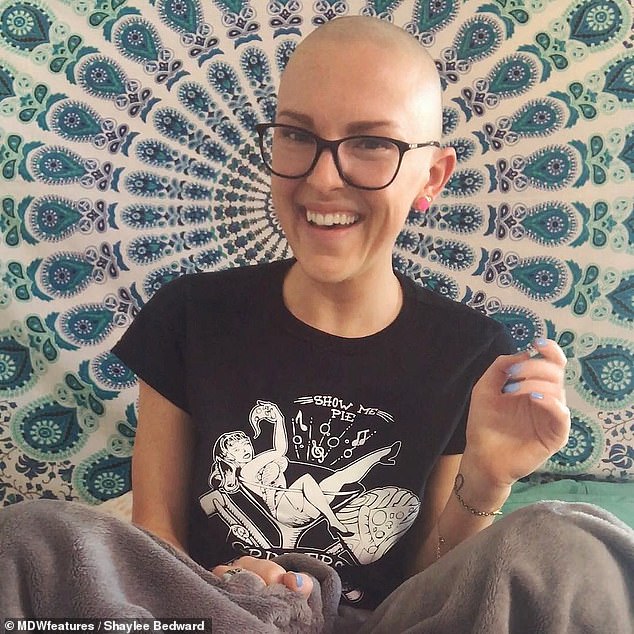 Currently, Bedward (pictured) is taking part in a clinical trial at MD Anderson Cancer Center in Houston, Texas, to replace her white blood cells with healthier versions that can hopefully destroy all remaining traces of cancer

Currently, Bedward is taking part in a clinical trial at MD Anderson Cancer Center in Houston, Texas, to replace her white blood cells with healthier versions that can hopefully destroy all remaining traces of cancer.

She has been sharing her journey on Instagram in the hopes of showing others that despite the pain and heartache her cancer journey has caused, it is still possible to be positive and to thrive.

‘Cancer is really hard, and it strips you of everything you know and forces you into a brand-new life that you never asked for,’ Bedward said.

‘My life now consists of back to back hospital visits, being poked and prodded, and constantly being strapped into machines where I have to hold my breath until I feel like I’m going to pass out.

‘I share my story to bring awareness to this silent but deadly disease so that other women can take control of their own health before it’s too late. I choose to show the world that you can survive and thrive with ovarian cancer.’