Seven million more American now live in counties with unhealthy, polluted air than did last year, according to a new report.

That means that more than 141 million people in the US now breathe air that is contaminated with high levels of ozone and soot, day-in and day-out.

Exposure to air pollution raises risks of asthma, lung diseases, heart disease and has been linked to autism, intellectual delays and cancer.

Since 1970, the US has made significant progress in limiting air pollution – but recent cuts to the Environmental Protection Agency (EPA) threaten to halt decades of work against air pollution, according to the new American Lung Association report.

Air pollution is choking American cities where 141 million people breathe unclean air, according to the annual State of the Air report from the American Lung Association

Anything we burn – coal, fossil fuel, wood releases particles, gasses, and chemicals into the air.

Since the 1970s, the US has managed to curtail CO2 emissions, factory emissions and energy consumption.

The State of the Air report credits these improvements – which come in spite of population, GDP and car travel increases.

But with the Trump administration’s plan to slash the EPA’s budget by a third, the American Lung Association worries that things could plateau, or even get worse.

The new report looked at levels of ozone, annual and short-term particle pollution (the latter of which lingers for 24 hours).

Levels of all three measures increased in 12 US counties, where over 20 million people live in the US in the last three years.

As it has for the last 19 out of 20 years of the report, Los Angeles remained the most ozone-dense city in the US.

Fresno-Madera-Hanford, also in California, had the most dangerous levels of tiny air particles year-round, while Bakersfield, California was had the worst 24-hour spikes of pollution in 2017 (the most recent data period).

On days when ozone, or smog, levels are high, residents may notice chest tightness or wheezing and coughing.

These acute effects are the culprits  800 hospital visits and 4,000 emergency visits a year in New York City alone – and the East Coast metropolis isn’t even the smoggiest city in the US.

The long-term effects are more insidious. Ozone leads to an estimated one million early deaths in worldwide. 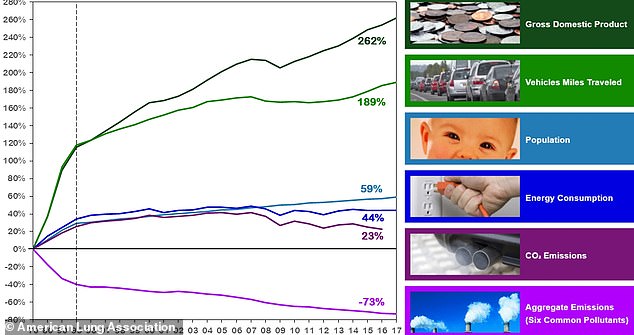 Combined with the effects of PM2.5 – tiny particles of burned matter that pollute the air and lodge themselves in the lungs – air pollution kills 8.8 million more people globally than would die otherwise every year.

Obama-era limits on carbon emissions are credited by some for saving as many as 11,000 lives a year.

But President Trump and his administration rolled back those limits, making way for goal industry growth. Some Republican lawmakers are similarly looking for ways to dismantle the previous administration’s anti-pollution initiatives.

And the administration has said it is further ‘evaluating’ measures that limit air toxins and mercury.

These moves have seemed to cause some alarm at the American Lung Association, which insists that ‘the Clean Air Act must remain intact and enforced to enable the nation to continue to protect all Americans from the dangers of air pollution,’ the association said in its report.

‘That progress is not certain to continue, as some in Congress seek to remove or weaken that law, and as the administration seeks to repeal or reverse the safeguards in place to enforce the law.’