In the doghouse! Overexcited Doberman shatters glass coffee table when she somersaults over the couch

An excitable dog ended up smashing her owners’ coffee table after she misjudged a jump and somersaulted onto the glass furniture.

Security video shows the Doberman following owner Paul into the living room and leaping from behind the couch, only to tumble off and hit the table.

The clip begins with Paul’s husband relaxing on a couch with three other dogs sitting on a blanket.

Everything is quiet and calm when suddenly Paul appears running from the kitchen towards the living room.

He slows down as he gets to the sofas and looks behind him at Fallon who is eagerly following.

She leaps onto the two-seater couch but lands on her head and somersaults off the cushion, shattering the glass table on impact.

Two-year-old Doberman Fallon lands head-first and somersaults onto her owners’ glass coffee table at their home in San Diego, California

Fallon quickly gets up from the floor with her tail between her legs and looks at the glass covering the floor while her shocked owners cover their faces.

While they’re processing what’s just happened her three dog siblings hilariously pop up from their vantage point on the other sofa.

Paul then carefully steps towards Fallon to check she’s not been injured in the smash while his husband keeps the other dogs calm and takes pictures of the mess.

Fallon’s owner said the pooch had been playing in the yard and was chasing his husband Paul back inside. 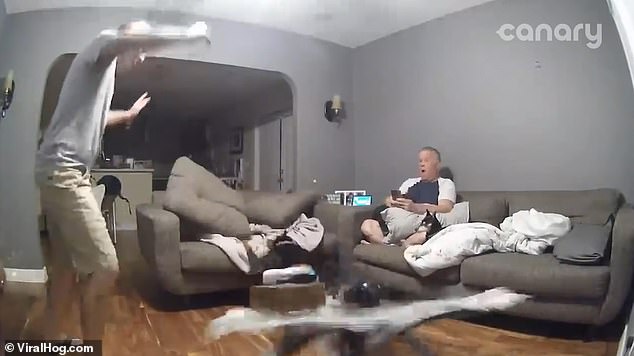 Watch out! The dog smashes into the glass table causing her owners to exclaim (right) and throw their arms up (left) as shards fly around the room 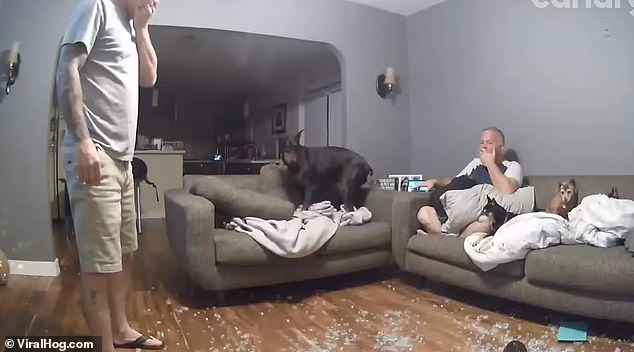 Oh dear! The pooch quickly climbs onto the small sofa which she just jumped over and looks at the mess, while her dog siblings also pop up for a look from the larger couch

He said: ‘Fallon, who just turned two, is very athletic and has jumped over the back of the couch thousands of times to her spot.

‘She undershot her jump, flipping over backward and shattering the coffee table. I had been out of town a week (that’s me sitting on the couch) and she was just extra excited and energized.

‘We have Canary cameras to keep an eye on the dogs, and that’s how this moment was captured.’