Overweight teenagers are TWICE as likely to suffer a stroke before the age of 50, scientists warn

Overweight teenagers are TWICE as likely to suffer a stroke before the age of 50, scientists warn

Overweight teenagers are twice as likely to suffer from a stroke before they turn 50 than normal weight teens, according to a new study.

Researchers from the Hebrew University in Israel analysed the BMI and health data gathered from 1.9 million people aged between 16 to 20 in the 1980s, as well as data on whether and when they have had a stroke during follow up appointments.

They found that while overweight teens were twice as likely to suffer from a stroke by age 50, clinically obese teenagers were over three times more likely to have a stroke.

While rates of teenage obesity and stroke among adults under 50 continue to rise globally, the precise link between the two conditions is still not fully understood.

Overweight teenagers are twice as likely to suffer from a stroke before they turn 50 than normal weight teens, according to a new study. Stock image

The team found that adults who survive stroke earlier in life – under the age of 50 – face poor functional outcomes, leading to unemployment, depression and anxiety.

The costs linked to stroke prevention and care are high and only expected to increase as more people are predicted to suffer from strokes.

For the new study the team used two nationwide databases: the Israel Defense Forces and the Israeli National Stroke Registry with data on stroke and BMI.

All the 1.9 million participants of both studies had undergone one complete medical exam between 1985 and 2013, and during this period 1,088 strokes occurred at an average age for the first stroke of 41.

The team found that adolescent BMI was directly related to the risk of a stroke.

Compared to participants in the low-normal BMI group, teenagers who were in the overweight category had a two-times higher stroke risk before the age of 50, while obese adolescents had a 3.4-times higher risk.

Even adolescents with BMIs in the high-normal range were more likely to have a stroke before age 50 compared to those in the low-normal BMI group.

After accounting for Type 2 diabetes, adolescents who were in either the overweight or obesity category still had a higher risk of stroke.

They were 1.6-times and 2.4-times, respectively more at risk compared to people who had BMI values within the normal range.

Despite overweight and obesity during adolescence being a common problem, researchers were surprised to find that Type 2 diabetes did not explain the higher risk of a stroke, which occurred even before the age of 30 in some cases.

Dr Twig noted that current medical literature has shown that having a stroke early in life may lead to recurrent strokes, heart attacks, long-term care and premature death. 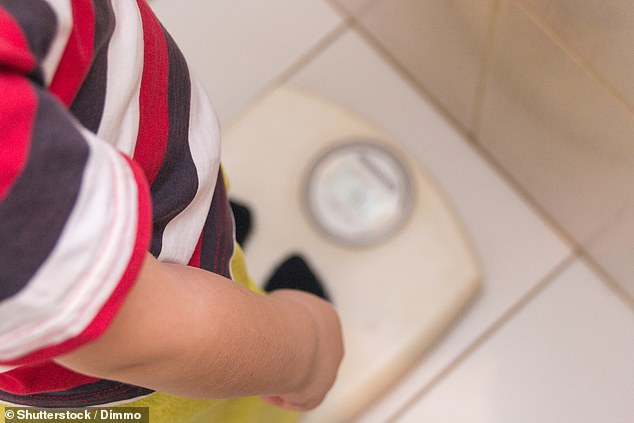 Researchers from the Hebrew University in Israel analysed the BMI and stroke data of 1.9 million people aged between 16 to 20 that have been tracked since the 1980s. Stock image

He added: ‘Our study is also the first to show that the risk of stroke associated with higher BMI values is the same for both men and women.’

A major limitation of the study is that BMI data at follow-up were not available for all participants, which meant that researchers were unable to assess the contribution of obesity over time to stroke risk and to determine the independent risk of BMI during adolescence, the authors explained.

Findings have been published in Stroke: Journal of the American Heart Association.