‘It’s one of the worst teams they could have faced’: Owen Hargreaves laments ‘tough’ Champions League draw for Man City as they face Real Madrid… and says last 16 tie ‘could go any way’

Owen Hargreaves has said that Real Madrid is one of the worst teams that Manchester City could have faced in the Champions League.

The heavyweight-giants have been drawn against one another in the round of 16 stage in the Champions League.

Hargreaves told BT Sport after the draw: ‘I mean it’s one of the worst teams they could have faced let’s be honest

‘Real Madrid on their day with the players they have if they can get it together, I think Pep Guardiola knows it’s a tough draw.

‘With the issues Real Madrid have though, they have a few injuries they will feel it is an awful draw for them as well. It could go either way.’

The pundits agreed though that Manchester City will go into the draw still fancying their chances against the side that have won the Champions League on 13 occasions.

Former Manchester City player Joleon Lescott said: ‘I don’t think any team would want this draw, but out of the two, I would feel more confident with City. 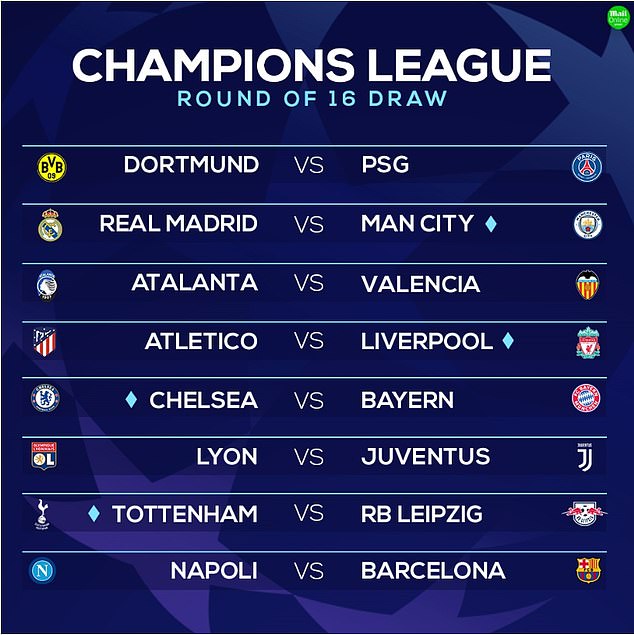 ‘Real Madrid have the experience, but over the past couple of years they haven’t been as consistent as they have become accustomed to. If Man City get the players fit again it will be a tough test.’

Real Madrid meanwhile finished behind Paris Saint-Germain in their group.

The question for City will be whether there defence can handle the attacking players of Zinedine Zidane’s Real Madrid side.

Hargreaves said: ‘Going forward there’s no issues with Manchester City they’ve got some of the best attacking players going around.

‘But defensively with no Kompany or Laporte and you think all of the players they have like Benzema, Hazard and Bale, it’s definitely not easy but I wouldn’t go against Pep, he’ll find a solution.’

The complete calendar of the knockout stages of the Champions League

While we know the eight posters of the knockout stages of the Champions League, UEFA has announced the schedule of matches.

The calendar for the knockout stages of the Champions League