By Isabella Nikolic For Mailonline and Mail on Sunday Reporter

Police are scouring CCTV footage to try and find the gang who attacked left-wing political commentator Owen Jones in a ‘blatantly premeditated assault’.

The Guardian columnist said he was kicked in the head after leaving the Lexington pub in Islington with friends when he was followed by a gang of four in London at about 3am yesterday.

He took to social media to relay his ordeal and said: ‘Six of us left the pub and were saying our goodbyes 30 metres away, then a group of three to four men left the pub, made a beeline for me, kicked me in the back, threw me on the ground, slamming my head, and kicked me in the skull.’

Left-wing political commentator Owen Jones was attacked yesterday in what he said was a ‘blatant premeditated assault’. Shadow Home Secretary Diane Abbott tweeted: ‘Shocking to hear about this attack’ 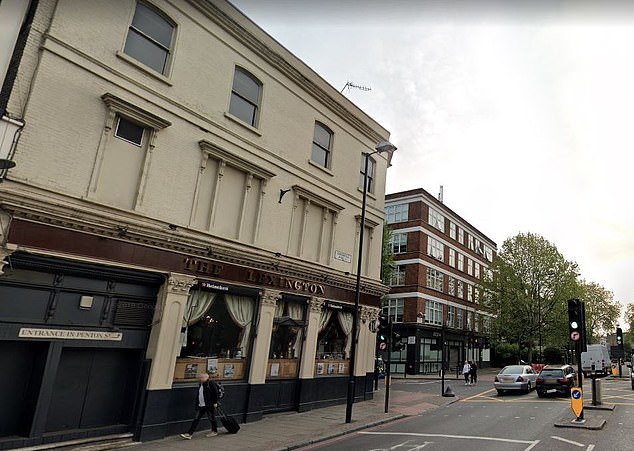 In an interview with the BBC he said that new evidence has emerged which suggests ‘political motivations’ behind the attack but said he couldn’t go into detail at the moment.

He said: ‘I’ve had evidence since, which I can’t discuss… which suggests political motivations.’

Insisting he wasn’t rattled by the alleged assault, Mr Jones said: ‘To the comments telling me to take time off: I know it comes from a good place, but I’m not cancelling my work commitments because of these thugs. Straight back to work, same routine.

‘I’m not rattled, and I’m going to very publicly show that.’

He wrote on Twitter: ‘My friends were punched trying to defend me. The group then scarpered. I’m fine other than a big bump on my head and a cut back.’

Pub manager Chris Smith said it was possible that they had CCTV footage of the suspects involved. 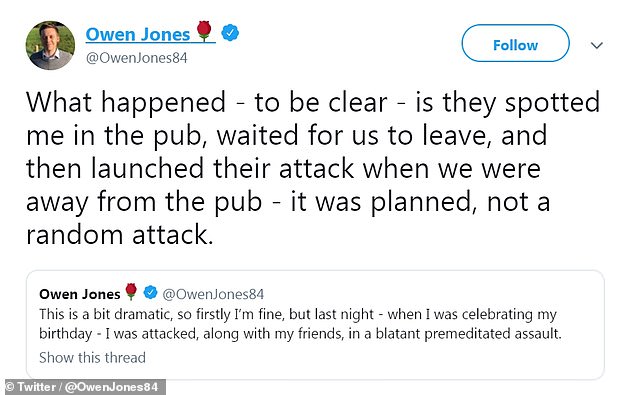 The Guardian columnist said he was kicked in the head after leaving a pub with friends and being followed by a gang in London at about 2am. He tweeted about the incident, above

Mr Jones, 35, a prominent anti-Brexiteer, added: ‘Given the far right attacks I’ve had in the streets, and generally escalating far right threats I’ve had, I’m in no doubt as to what this is.’

He carried on to say: ‘What happened – to be clear – is they spotted me in the pub, waited for us to leave, and then launched their attack when we were away from the pub – it was planned, not a random attack.’

And Labour leader Jeremy Corbyn tweeted to show his solidarity by saying: ‘I send my solidarity to Owen Jones and his friends who were attacked last night.

And Labour leader Jeremy Corbyn tweeted to show his solidarity

‘Owen believes it was politically motivated, and we know the far right is on the march in our country.

‘An attack on a journalist is an attack on free speech and our fundamental values.’

The Metropolitan Police said a reported assault in Pentonville Road, Islington, was being probed, adding: ‘CCTV will be reviewed. A number of witnesses have been spoken to.’

According to the BBC, Lexington’s manager Chris Smith said his staff were ‘all upset’ about the assault and will do anything they can to help the police investigation.