Oxford and Cambridge now have a combined wealth of £21billion

Oxbridge colleges are sitting on an immense fortune of £21billion, including a Scottish castle, the O2 arena, the Top Gear test track and Millwall FC’s training ground, it emerged Tuesday.

An audit of Oxford and Cambridge’s accounts revealed that they own property all over the UK worth £3.5billion.

The rest of their vast wealth consists of a portfolio of investments, estates, endowments and artefacts.

The land and buildings owned by the colleges cover 126,000 acres – an area more than four times the size of Manchester.

Their holdings exceed the 104,000 hectares owned by the Church of England, which was thought to be Britain’s largest private landowner, and their wealth amounts to more than the combined investments of the other 22 members of the Russell Group of elite universities. 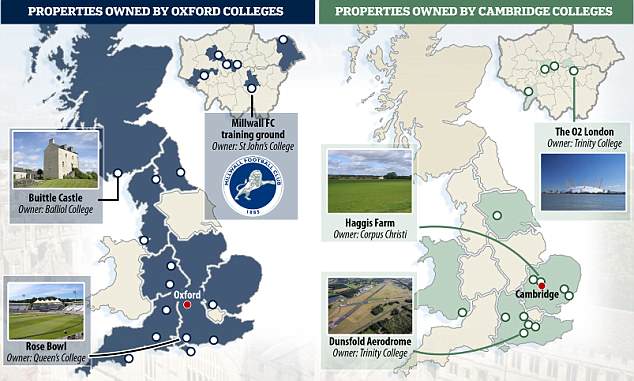 Cambridge and Oxford own huge amounts of land and assets including the 02, the Rose Bowl and even Millwall’s London training ground

Critics said yesterday that some of the wealth should be used to extend outreach projects for disadvantaged students.

Labour MP David Lammy said: ‘There can be no more excuses or passing the buck. With such a vast amount of wealth at their disposal I fail to see how it is tenable for Oxbridge colleges to continue to pay lip service to access and dedicate such a tiny proportion to improving access.’

Trinity College, Cambridge, is the wealthiest of the colleges, with published assets worth £1.3billion in its latest accounts.

St John’s College tops the table at Oxford, with nearly £600million in assets. 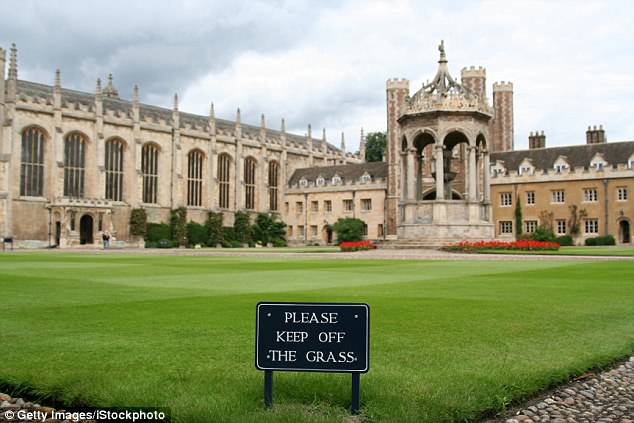 The oldest property owned by any college is Buittle Castle in Dumfries and Galloway, built in the 12th century and given to the Scottish nobleman John de Balliol, who, with his wife, Lady Dervorguilla, founded Balliol College, Oxford, in 1263.

Meanwhile, Trinity owns the 999-year lease for the O2, originally called the Millennium Dome, and has made a profit of £22million from events there over two years.

Other holdings include the site of the Top Gear test track, also owned by Trinity, and the Rose Bowl, the home of Hampshire cricket club, which is owned by Queen’s College, Oxford.

There is also an Isle of Wight farm bought by The Queen’s College, Oxford, from Henry VIII, industrial estates in Leeds, gastropubs, and the freehold to more than 100 retail outlets and shops.

In Brent, All Souls College, Oxford, owns more than 300 properties, including many residential houses and the freehold to a Ladbrokes betting shop.

Trinity also has a £563million investment fund, which recently included shares in the world’s largest arms firms, several partners in the Dakota Access pipeline, and Arconic, the supplier of the notorious cladding on Grenfell Tower.

The true extent of Oxbridge’s wealth is likely to be higher because many colleges do not place a value on assets such as art. 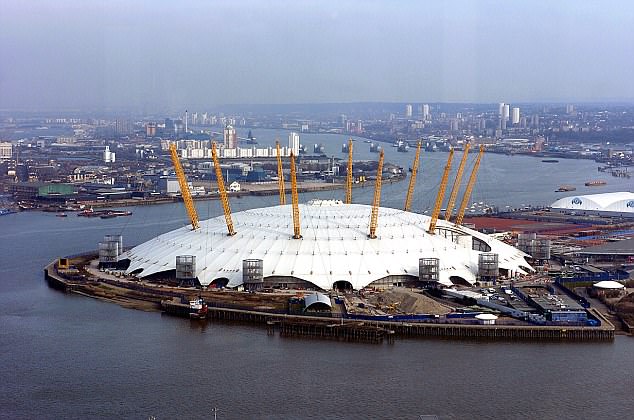 Cambridge’s Trinity is Britain’s richest college worth £1.4billion alone and owns the 999-year lease on the O2 arena 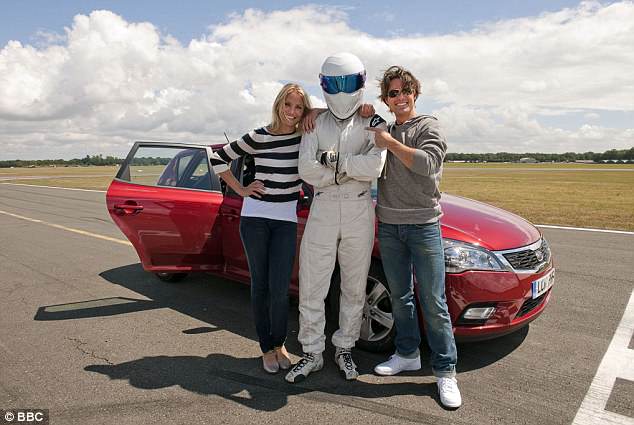 It also owns Dunsfold Airfield in Surrey, used by the RAF in the Second World War and now most famous as the place where the BBC’s Top Gear is filmed and cars speed around the show’s test track (Tom Cruise and Cameron Diaz pictured with The Stig)

Oxford’s Ashmolean Museum has drawings by Michelangelo and Leonardo da Vinci, and paintings by Picasso, Constable, Titian and Turner.

The universities insist much of the wealth is tied up in real estate and could not be used without selling science labs, lecture theatres and libraries.

Some funds are reserved for specific roles, such as paying for fellowships or student support, with conditions set by donors centuries beforehand.

A spokesman for Oxford said: ‘It is simply not the case that we have large unused funds immediately available for general spending.’

A portrait of Theresa May that was taken down at Oxford following student protests remains in storage despite a promise to reinstate it.

The image was removed three weeks ago from the geography department over concerns that it could be vandalised after students claimed it created a ‘hostile environment’.

The university said on May 8 that its removal was only temporary. But officials revealed that it was still down yesterday – and there was no date for it to be displayed again.

The image of the PM was unveiled this month as part of a display celebrating 12 of the university’s ‘outstanding’ female geography graduates.

But hard-Left students claimed she was ‘contentious’ because of her approach to Brexit and the Windrush scandal, and demanded it be torn down.

Following its removal, universities minister Sam Gyimah said staff should ‘get a grip’ and put it ‘in a more prominent place’.

An Oxford spokesman said it would reinstall the portrait as soon as possible, adding: ‘Considerations include… the security of the picture.’