A member of staff at Oxford University has been suspended after claims emerged he downloaded manuals on how to carry out terror attacks and was jailed for being linked to Islamic terrorism.

The university made the decision after finding out the ‘non-academic’ employee had been arrested for terrorism offences and detained in Italy five years ago.

His identity is not yet known, but it is alleged he was involved in spreading extremist material and spent two and a years in various prisons – despite pleading his innocence.

He reportedly sent emails containing links to manuals on how to ‘execute terror attacks and guerrilla techniques’.

Yesterday Oxford confirmed when asked by the Daily Telegraph that it had ‘immediately’ alerted Thames Valley Police when one of the man’s colleagues found out about his background earlier this month, triggering and internal investigation.

It’s not known what job he has at the university, or whether he was in a position to seek to influence students should he have chosen to do so.

It is also not clear how long the man, who is believed to be in his mid-30s, has been employed by the university or has lived in the UK.

Reports from Italy at the time of his March 2012 arrest said he had been detained in the eastern Marche region.

An operation by Italian authorities and the Cagliari State Police led to his arrest as part of a wider investigation into Jihadi extremism.

He is believed to have converted to Islam after studying Arabic, changed his name and wanted to travel to Afghanistan to ‘join the war-fighting formations of the ‘Holy War’, the reports claim.

The Italian media reported he was in a relationship with a Moroccan woman and that he was arrested by counter-terrorism police because they believed he wanted to leave the country to go to Rabat, Morocco.

The man, along with others, was considered a major link between international Jihadists and ‘the Italian network’, it was reported, and may have served a prison sentence in a number of ‘institutions’ across Italy, before his release in 2014. 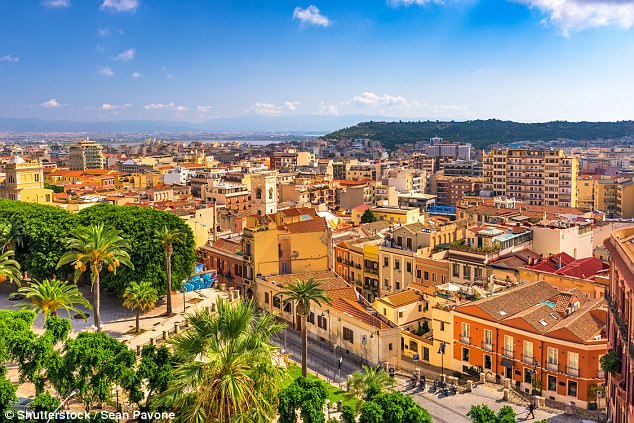 The man, whose identity is unknown, but believed to be in his mid-30s, was arrested by state police in Cagliari, Italy (pictured) as part of an investigation into Jihadi extremism. He was allegedly sent emails linking to guides on ‘how to execute terror attacks and guerrilla tactics’

He then moved to England, where he was later employed by Oxford University.

A spokesman for the university told the newspaper the man had been suspended from work pending an investigation.

Former Assistant Commissioner for the Metropolitan Police Helen King, now the principal of St Anne’s College, will head a ‘review’ of the circumstances surrounding the case.

It is understood Ms King, who is chairwoman of the university’s security committee, will then make ‘recommendations’.

Thames Valley Police said it is not currently investigating any offences related to the man.