An illegal immigrant pizza deliveryman could be spared deportation if he can show his American wife would suffer’ extreme hardship’ without him.

Pablo Villavicencio was detained when he made a delivery to Fort Hamilton army base on Friday and was asked for a second form of ID.

But lawyers said the Ecuadorian who was on the run from Immigration and Customs Enforcement since 2010 could still manage to stay.

Pablo Villavicencio, an undocumented pizza delivery man was detained by Immigration and Customs Enforcement (ICE) as he delivered catering to an Army base in Brooklyn on Friday; He is seen here (top, right) with his wife, American citizen Sandra Chica (top, left) and their two young daughters

He married to Sandra Chica, 38, a naturalized American citizen, five years ago and has two young daughters aged three and four.

Villavicencio could therefore get a green card, which he has already applied for, but the legal process may be long and arduous.

He would have to get a waiver as people who have spent more than a year in the U.S. illegally can’t re-enter for a decade.

To do that he would need to show his wife would suffer ‘extreme hardship’ without him, which Ray Fasano, former chair of the Federal Bar Association’s immigration law said would be a ‘cake walk’.

‘They’ve got two little kids, so she’d have to struggle as a single mom,’ he told the New York Post.

However, former government immigration lawyer Kerry Bretz said this was a ‘very high standard’ to fulfill and Villavicencio’s case may not be strong enough.

Stopping his deportation would also require him to prove ‘extreme hardship’ to Ms Chica or convince ICE officials to just let him out. 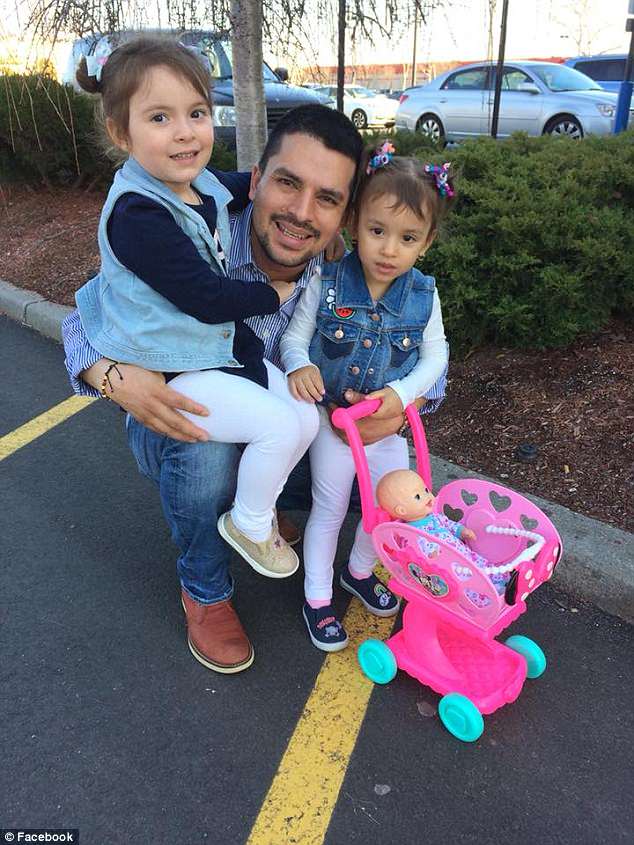 Should he pull this off he would only need to go back to Ecuador for a few weeks to do his interview and finish the application.

But if he was deported he would have to take the much more difficult route of applying from his birth country.

Villavicencio would also need to have only crossed the border illegally once, as multiple crossings make it almost impossible to get a spousal green card.

‘You’re better off having a criminal history,’ Mr Bretz said.

Villavicencio was arrested after guard at the Fort Hamilton gate asked him to produce more than an IDNYC card, an official form of identification recognized in New York City.

‘I have been there before and always go in and never have had any problems. They actually know me and the sergeant knows me for some time doing delivery,’ he said.

A GoFundMe page to cover his legal expenses and help his wife and children has so far raised $28,000 in four days.

‘It’s cruel that they’re going to separate my daughters from him,’ Ms Chica, a part-time medical assistant, said.

‘He’a supporting the family and now I’m going to be by myself with them.’

The trouble for Villavicencio, who had been living with his family in Long Island, started because a new soldier was at the gate that day.

‘Last Friday there was a different security guard and he told me I needed to go get another pass to enter,’ Villavicencio said.

‘And I proceeded to do that. A tall man with dark skin started to ask me many questions. He asked me about why I didn’t have any social security card. 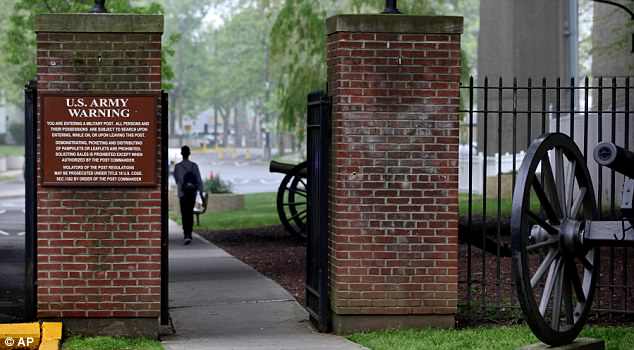 The trouble for Villavicencio, who had been living with his family in Long Island, started because a new soldier was at the gate at Fort Hamilton Army base that day

‘He called the NYPD and the NYPD told him I didn’t have any record, that I was clean. But the man said, ‘I don’t care.’ He said I need to keep waiting and he called ICE.’

A spokesperson for Fort Hamilton said that when Villavicencio couln’t produce a Department of Defense- issued identification card, he was instructed to secure a day pass.

At that point, the woman said, he signed a waiver for a background check, and ‘an active Immigration and Customs Enforcement warrant was discovered on file.’

According to an ICE spokesperson, the pizza delivery man was ordered by a judge to leave the country in 2010, and has been a ‘ICE fugitive’ ever since.

The manager at Nonna’s Deli in Queens, which is the pizza place where Villavicencio works, only said, ‘He was a great worker.’

‘Is our city or our nation any safer now that Pablo the pizza delivery man is off the streets?’ Brannan asked. ‘It’s insane — the message it sends is scary and ridiculous.’