Every year, around 25,000 people in the UK have a pacemaker fitted. Sometimes the wires can become dislodged, requiring further surgery, but a new device could avoid this problem. Anne Drew, 74, a retired care worker from Eastbourne, East Sussex, had one fitted, as she tells ADRIAN MONTI.

Five years ago, an hour before my husband John and I were due to board a coach for a trip to York, I collapsed in our bedroom. My legs just buckled beneath me. I didn’t pass out, but after getting up the first time I collapsed again and was unable to stand up.

I shouted to John, who called an ambulance, and spent the next three days in hospital where tests, including an echocardiogram to examine the heart and blood vessels, showed I had atrial fibrillation, a fairly common condition that can happen as we age.

Around 25,000 people every year n the UK have pacemakers fitted but the wires can become tangled requiring a further operation

Doctors explained my heart was beating in an abnormal rhythm, so blood wasn’t being pumped around my body properly, which is why I had collapsed.

It came as a massive shock. I’d always been slim, I enjoyed long walks, ate healthily, rarely drank and stopped smoking 26 years ago.

I was prescribed warfarin to prevent blood clots, as the condition raises my risk of a stroke, and dronedarone to help restore my heart’s normal rhythm.

For the next three years I was fine, but by autumn 2016 I was increasingly breathless and tired.

My GP referred me for an electrocardiogram to examine my heart’s electrical signals, and an echocardiogram. These tests showed my heart was getting weaker and I now had heart failure, where the heart cannot pump enough blood, which is apparently a common complication of atrial fibrillation.

At a follow-up appointment the following February, my consultant suggested having a pacemaker fitted to help my heart maintain a normal rhythm. The plan was to have the operation some time later that year.

However, my symptoms deteriorated and by June even walking slowly to the local shops was a struggle. I’m a churchgoer, but I was too weak to stand up to sing a hymn. I had to stop doing voluntary work serving lunches to patients at a local hospice. My life came to a standstill.

The cardiologist decided to bring my pacemaker operation forward. I was told I could have a newer type that has three pacing leads rather than two — and the third wire would be screwed into a vein near my heart, rather than just placed inside it.

■ There is no increased risk from surgery to fit this pacemaker, which has one of its three wires fixed in place with a screw, than with any other type of pacemaker operation.

■ It is not yet clear how easy it would be to remove the secured third lead if, for some reason, it was not working.

■ Dr Ali Khavandi, a consultant cardiologist at BMI Bath Clinic in Somerset, says: ‘Traditionally with a pacemaker with three leads, the third lead goes inside the vein at the back of the heart. In a large vein, this means the third lead will not naturally have anything to grip on to.

‘This screw solves this problem. It offers another option for some patients who, in the past, might not have had a successful outcome when the lead was not fixed in place.’

This would make the pacemaker more reliable, as the lead would be less likely to move out of place. (Whenever that happens, further surgery is then required). For the operation, I was sedated and given a local anaesthetic around my left collarbone where the pacemaker would go. At one point, I felt some slight pain in my chest but was given morphine and I dozed off.

The operation took about 90 minutes. Afterwards, I felt fine. I remember chatting non-stop to the nurse, whereas only a few hours before I couldn’t hold a conversation without gasping for breath. It was like someone had flicked a switch.

An hour later I was up walking, and that evening I went home. The next day I felt fit enough to complete a two-hour walk.

I have a two-inch scar below my collarbone and need six-monthly check-ups.

So far I’ve had no problems and am hoping I might be able to come off the dronedarone when I’m next reviewed.

I’m back helping at the hospice and enjoying my long walks again. It has given me my life back.

A pacemaker’s job is to take over the role of the heart’s own natural pacemaker — the sinus node — which is a tiny cluster of cells in the upper right chamber of the heart (right atrium).

The sinus node sends out an electrical impulse that makes the heart contract and beat normally. 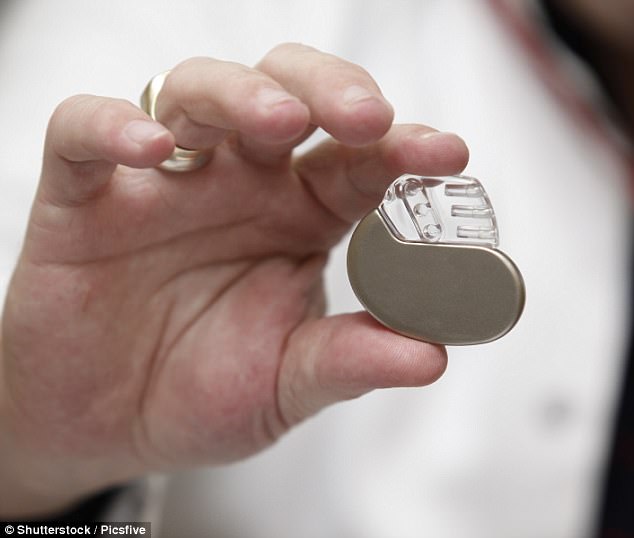 A standard pacemaker has two wires but Mrs Drew was told she could have a newer type that has three pacing leads— and the third wire would be screwed into a vein near my heart, rather than just placed inside it

Most pacemakers have two wires, with leads that stimulate the right atrium and the right ventricle (which is at the bottom of the heart).

But for patients with heart failure, not only is the signal irregular, it often does not conduct equally to both sides of the heart.

A pacemaker with a third wire threaded into a vein at the back of the heart, called the coronary sinus vein, can correct this by stimulating the left ventricle. By sending impulses equally to both lower chambers of the heart, it makes them beat together.

This is called a biventricular pacemaker and has been in use in the UK for around ten years. It can improve the blood-pumping efficiency of the heart by 15 per cent, which is a lot when the heart isn’t performing well.

When we implant such a device, the treatment is called cardiac resynchronisation therapy (CRT).

However, it can be quite tricky to get the third wire into the ideal place, as the vein it’s threaded inside is very bendy. And once fitted, the lead can become dislodged, simply by the beating of the heart.

It has been reported that this affects anywhere between one in 30 to one in ten patients. This means the pacemaker will no longer work, and the patient will suffer symptoms again and need another operation.

A new pacemaker called the Attain Stability, introduced into the UK about six months ago, overcomes these problems.

Although it is the same size as other three-lead pacemakers (they are all around the size of a matchbox), the third lead is secured to the inside of the wall of the vein.

It is held in place by a tiny screw just 0.2mm long — the width of a human hair.

A screw like this — one that is small enough to fit inside the vein while remaining fixed in place, and without causing damage — is a recent technological development. It means the lead is much more secure and the surgeon is able to place it more precisely.

If the poles aren’t in the ideal position, they can stimulate the diaphragm as well as the heart, leading to muscle spasms that feel a bit like hiccups.

Using this new pacemaker also cuts down surgery time by about 30 minutes.

The operation starts the same as fitting any pacemaker.

The patient is given a local anaesthetic in the left shoulder, sedated and attached to a heart monitor. The surgeon uses X-ray scans to check the pacemaker lead is being placed correctly.

My first job is to make a 2cm incision close to the collarbone and access the axillary vein, which runs from the right atrium to the right ventricle.

A tube is inserted in it so equipment can be passed down the vein, and two of the leads go into the two right-hand chambers of the heart.

These are connected to the pacemaker’s battery that is slipped under the skin.

Using the screw, I then secure the third wire in the coronary sinus vein and test the pacemaker to ensure that it stimulates the heart correctly.

In general, two-thirds of patients who have this device feel much better, and one-third report having some benefit.

Of those that it has not helped, this is usually because they have a lot of scar tissue in their heart.

I have personally fitted about six of these new pacemakers since September 2017.

Although it is still very early days, I do believe it is the way forward.