Padma Lakshmi was seen out in New York City just one day after her ex-husband Salman Rushdie was attacked on stage in Western New York.

Rushdie was stabbed as he was about to give a lecture at a literary festival. The author’s 1988 work the Satanic Verses, which reimagines parts of the Prophet Muhammad’s life, led to Iran’s Ayatollah Khomeini to issue a fatwa, a death sentence, against Rushdie. His attacker, Hadi Matar, 24, is a sympathizer of the Iranian regime.

The renowned author and model were married from 2004 to 2007. Both went on to disparage their former spouse in memoirs, with Rushdie accusing Lakshmi of ‘majestic narcissism.’ Lakshmi, for her part, wrote that her ex-husband required constant praise, feeding and attention, not to mention ‘frequent sex.’

The Top Chef host, 51, grabbed lunch at Il Posto Accanto restaurant in the East Village with her beloved Chihuahua by her side on Saturday afternoon.

Spotted: Padma Lakshmi was seen out in New York City just one day after her ex-husband Salman Rushdie was attacked on stage in Western New York 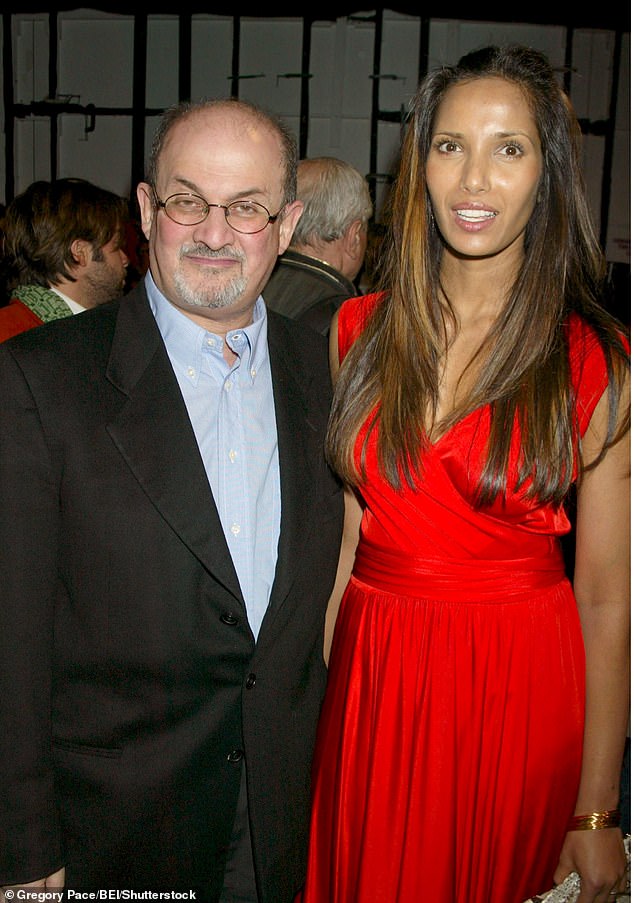 Upon her arrival to the restaurant, Lakshmi had her raven tresses pulled back in a loose ponytail and a black mask over her face.

Before sitting down to eat, the model took her tiny pooch for a brief stroll around the neighborhood.

After dining, the model was captured sans mask and with her hair down.

She was holding a bag of leftovers and appeared to be making her way back home with her four-legged family member by her side. 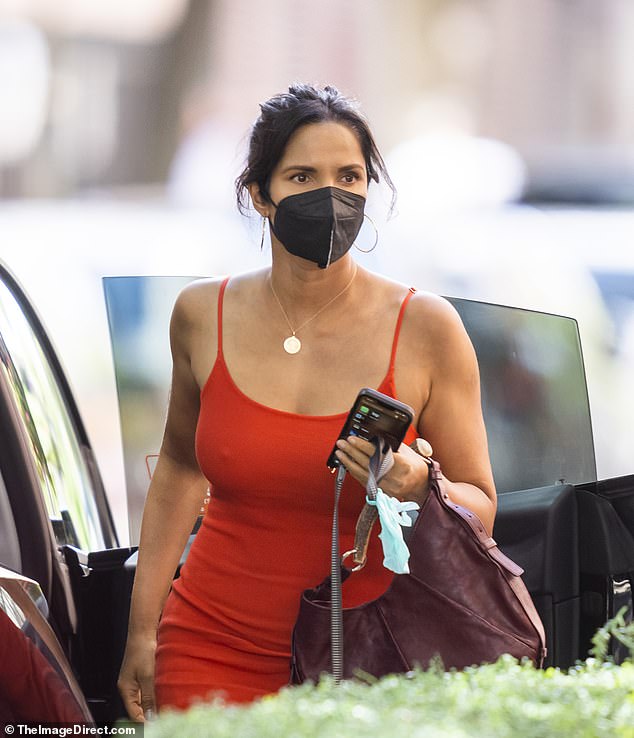 Out to lunch: The Top Chef host, 51, grabbed lunch at Il Posto Accanto restaurant in the East Village with her beloved Chihuahua by her side on Saturday afternoon 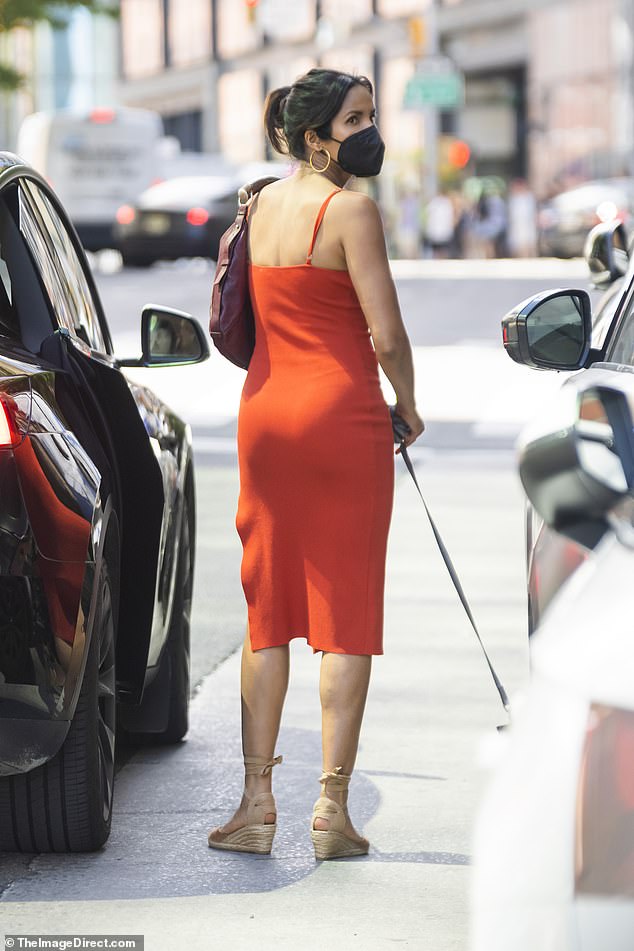 Around the time Lakshmi was out to lunch, the man suspected of attacking her ex-husband, 75, during a speaking engagement on Friday had his first day in court.

Matar pleaded not guilty, through his lawyer, to attempted murder and assault charges, and was refused bail, according to The Hollywood Reporter.

The suspect, a New Jersey resident, is accused of stabbing Sir Salman Rushdie, whose novel The Satanic Verses (1988) triggered death threats, just as he was being introduced at a lecture at the Chautauqua Institute, a nonprofit education and retreat center.

He was about to give a lecture when a masked knifeman stormed the stage and attacked him. 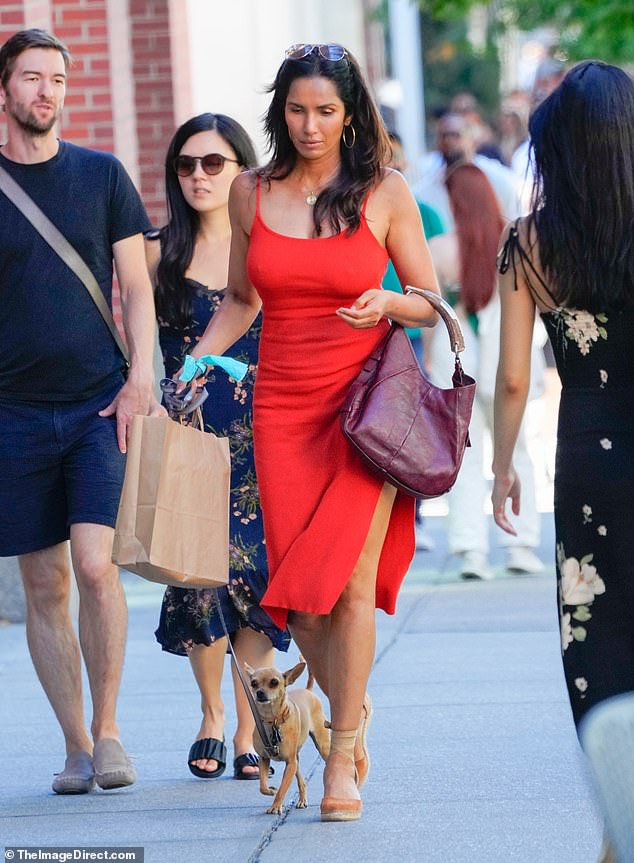 On the go: After enjoying some Italian cuisine, Lakshmi made her way back out to the bustling street holding a bag of leftovers and her dog in tow

In a three-minute video clip shared by one of the attendees, people could be heard screaming and gasping as a dozen audience members, including a police officer, rushed to the stage and wrestled the attacker off the author. Blood was left spattered across a chair and a screen after the frenzied attack.

Sir Salman remains on a hospital ventilator after suffering a damaged liver and severed nerves in his arm in the brutal knife attack on Friday morning. His spokesman said he is likely to lose an eye. 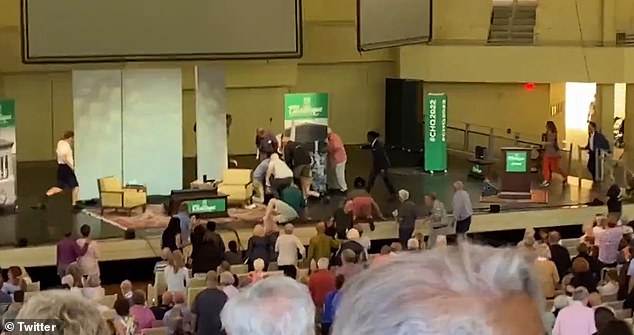 Dozens of onlookers quickly rushed to the stage to try to apprehend the suspect, and help Rushdie after he was attacked in front of hundreds 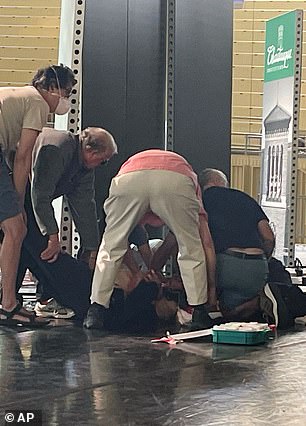 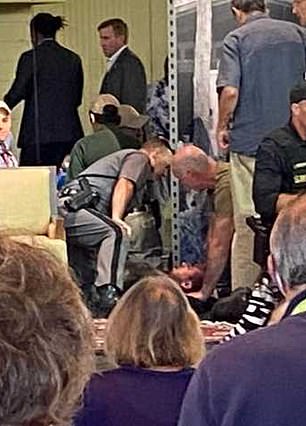 People rushed to assist the author after the attack, with the attacker being restrained by witnesses.  The motive for the stabbing is currently unknown 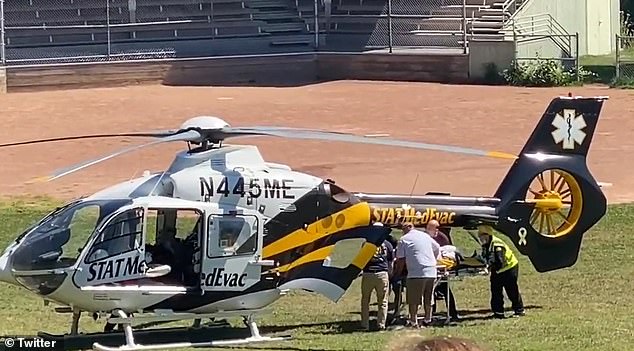 Medics rushed to the scene to take the author to hospital to treat his injuries. A Chautauqua Institution spokesperson, where the event was taking place, said: ‘We are dealing with an emergency situation. I can share no further details at this time.’