A former Conservative Party campaign manager is facing jail after admitting a string of online sexual abuse offences involving over a thousand indecent images of children.

The sick paedophile admitted a total of seven counts including possessing a prohibited image of a child and one of publishing an obscene article.

On Friday Lerigo appeared at Warwick Crown Court where he pleaded guilty to the offences, which took place between April 2017 and November 2018.

The disgraced former Tory official was told to expect jail and was granted unconditional bail ahead of his sentencing next month.

The court heard Lerigo was found with an iPad containing a total of 1,005 illegal images including 146 category A (the most serious) abuse pictures of children.

Following his arrest in November 2018, investigators also found a WhatsApp chat with another offender discussing the sexual abuse of children.

He also had a laptop which contained evidence of a total of 414 illegal images – including 59 category A images as well as 258 images of extreme pornography.

The former Tory regional press officer was suspended by the party after allegations came to light following a National Crime Agency (NCA) investigation.

He had been campaign manager for the Conservative Party at the 2017 General Election and for the Britain Stronger In Europe group during the EU referendum.

Judge David Potter imposed an interim Sexual Harm Prevention Order, which means he must make any internet use available for authorities to check.

The judge told Lerigo: ‘The 21st of August is the date that I will fix for the sentence.

‘I see there is also an application for Sexual Harm Prevention Order. It seems to me from what I’ve read of this case, that will almost inevitably be imposed.

‘What I propose to do is make an interim Sexual Harm Prevention Order on the terms proposed.

‘You’ll be free to make any submissions as to the proportionality at the sentence.

‘It seems to me looking at them they’re not so wide-ranging or unspecific as to be inappropriate for a relatively short period of time.

‘It’s quite possible police officers will visit you in the next three weeks or so to check whether or not you are observing. 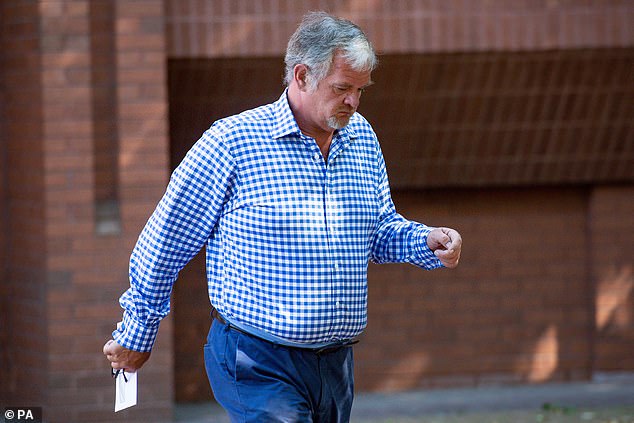 ‘I’m going to bail you so that reports can be furnished on your behalf and so that probation could also meet with you.

‘It’s important, though, that if you are not contacted by probation within seven days you don’t, as it were, hide your head in the sand.

‘You become proactive because if there isn’t a report on August 21 because you haven’t been seen, I anticipate that any judge will lay the responsibility for that at your door, no one else’s.

‘You’ve been on bail and I believe it’s been unconditional. I’m not going to impose any conditions but as I say if you don’t cooperate with probation there won’t be a report.

‘The fact that I’m bailing you today is absolutely no indication of the sentence that’s likely to be imposed.

‘What you must do in advance of August 21 is make some arrangements so that if a custodial sentence is passed on that date, and it seems to me that’s a very real possibility looking at the guidelines, that there are some provisions for the care of your mother.

‘If it’s suggested that you can’t go into custody because there’s no care in place for your mother that is unlikely to be a profitable line of mitigation.

‘That’s one of the major factors that has led me to bail you today.

‘If you don’t turn up on August 21 I’m sure you will, but if you didn’t you would be committing a criminal offence and would undoubtedly attract a custodial term.

‘So with those warnings, you’re free to go and you know of course that I’ve imposed an interim sexual harm prevention order.

‘The conditions broadly they are, if you use the internet, you have to make available your use of the internet for inspection by the authorities and not seek to hide it.

‘If you do, that’s a criminal offence. You’ll also be subject to the notification requirements and those will be explained to you and you will have to wait for a notice.’

Lerigo, of William Bristow Road, in Coventry, will next appear for sentence at Warwick Crown Court on August 21.

‘Every time an abuse image is shared or viewed the child is revictimised.

‘Child sexual abuse is a priority threat for the NCA. It doesn’t matter what walk of life an offender is from, we will do everything in our power to catch them.’

An NSPCC spokesman said: ‘By accessing and distributing this terrible content, Lerigo was helping to sustain a trade that thrives on children’s suffering.

‘Children often endure appalling abuse for these kind of images and videos to be created.

‘But law enforcement cannot solve this problem alone – big tech must be made to use their expertise and resources to quickly remove them from their platforms and identify who put them there in the first place.’