Two well connected ex-MPs have been detained and accused of 78 counts of rape, sexual violence and making pornography involving male and female minors.

Ten underage victims were identified aged eight to 17, say investigators, but there are claims that the scale of the ring has been covered up to hide other political figures.

Igor Poplevko, an ex-MP In the pro Vladimir Putin United Russia has been arrested by police in a major paedophile investigation involving ten victims aged between eight and 17

The children were gifted new iPhones or money as ‘rewards’ in an attempt to buy their silence, according to police.

An unnamed woman aged 20 has been jailed already for supplying her own nephews to the ex-politicians who were named as Vitaly Kurskov, 54, a former regional fuel and power minister, and his ex-MP crony Igor Poplevko, 56, both of the United Russia Party.

These two boys were aged eight and 12. Two schoolgirls aged 15 revealed they were plied with alcohol before being sexually abused by the pair.

They revealed details to their mothers who complained to police.

Kurskov rented a flat so that he and Poplevko could rape and sexually attack children while making pornographic films, say investigators.

A neighbour also alerted police about Kurskov ‘bringing children to the apartment’.

They removed video and photographic cameras, laptops and ‘other electronic devices’. 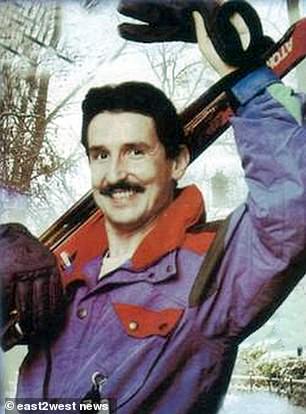 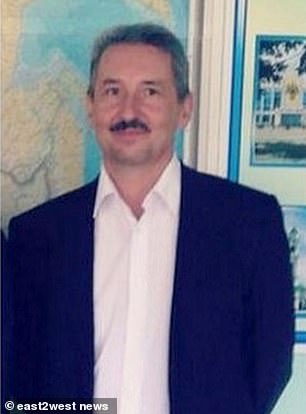 Poplevko has been arrested alongside Vitaly Kurskov, a former regional fuel and power minister. Kurskov is accused of renting the flat

When police raided the apartment, Kurskov jumped out of a second floor window in a bid to escape arrest, but was detained by police, say reports.

The pair – both grandfathers – face court over the charges and could be jailed for up to 20 years if convicted.

The case will be held in secret prompting claims of a ‘cover up’ of alleged involvement of other prominent figures.

The men are both former MPs in Astrakhan region and remained active party members.

United Russia party – which controls the Russian government and many regions – is to expel the men next week.

Irina Rodnenko, a senior official with the regional party, said the pair would be stripped of their membership at a coming meeting.

‘Kurskov and Poplevko are suspected of outrageous crime against children,’ she said. 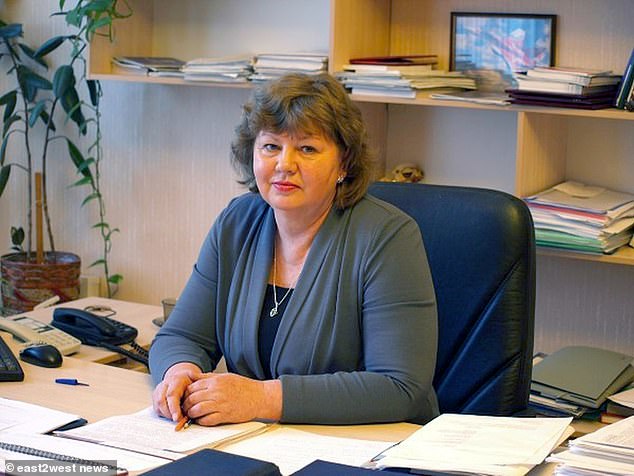 Irina Rodnenko, a senior official with the regional party, said the pair would be stripped of their membership at a coming meeting

‘I am a mother and a grandmother myself and I can only say that such crimes are immoral and inhuman.

‘I feel ashamed that these men were associated with our group of MPs, and that they were MPs.

‘The least we can do is to throw them out of the party.

‘Now it is the court that will make a decision and I am sure that the criminals will be punished in the most severe way.’

The woman linked to the case was jailed for 12 years in supplying her underage nephews to the alleged paedophiles, say reports citing law enforcement sources.

The men were detained in March last year but full details of the state’s case against them have only now been released by the Russian Investigative Committee.

Their trial is expected to begin soon.

Kurskov is a former chairman of the board of directors of Karl Marx Ship Building Factory in Astrakhan.

He is married with two adult children.

Poplevko is a father of three and also a grandfather.