Paedophile woman, 48, is jailed for 12 years for ‘exceptionally depraved’ sex assaults on a child

Paedophile woman, 48, is jailed for 12 years after committing ‘exceptionally depraved’ sex assaults on a child

A Teesside woman who committed a string of sex offences against a child has been jailed for 12 years.

Sandra O’Rourke sexually assaulted the victim and encouraged them to engage in sexually activity.

Teesside Crown Court heard how the 48-year-old also carried out sexual acts while she was in the child’s presence.

Sandra O’Rourke, pictured, has been jailed for 12 years for a campaign of sexual offences against a child which sentencing judge Stephen Ashurt called ‘exceptionally depraved’

Richard Bennett, prosecuting, said the child was told to keep it a ‘secret’ and that nobody would believe them if they spoke out.

In a statement, read to the court by Mr Bennett, the victim was said to suffer from flashbacks and be receiving counselling.

She also admitted two counts of engaging in sexual activity in the presence of a child.

Stephen Constantine, defending, said O’Rourke was under the influence of cannabis for a ‘substantial’ amount of the time the abuse took place.

He told Judge Stephen Ashurst that he ‘can’t do any better’ than to remind him of the defendant’s words.

He said: ‘She says this: “I’m angry with myself and disgusted with what has happened to say the least.

‘”I can’t find the words to describe my remorse and regret for what has happened.”

‘She herself recognises that she must be punished, that she will engage with whatever help will be provided to her.

‘I ask, your honour, to keep the inevitable sentence as short as you can in the circumstances.’ 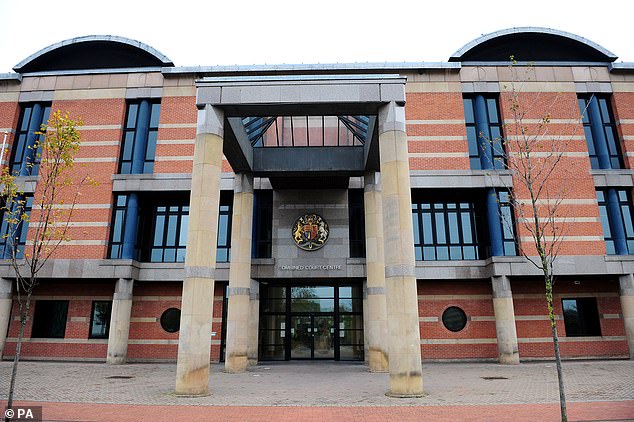 Teeside Crown Court, pictured, heard Sandra O’Rourke, 48, threatened her victim and said they would not be believed should they tell anyone about the abuse taking place (file photo)

Judge Ashurst told O’Rourke that the crimes she committed were ‘exceptionally depraved and serious’.

He said her victim has flashbacks and believes they will never be able to forget what has happened.

Judge Ashurst sentenced O’Rourke to 12 years in prison with an extended licence period of one year.

Sgt Paul West from Cleveland Police’s Child Abuse Vulnerable Adults (CAVA) unit said: ‘The court heard in a victim impact statement how this offending has had a significant impact on the victim’s life.

‘I’d like to praise their bravery in coming forward and their strength throughout the court process.

‘We welcome today’s sentence and hope it will give the victim some closure.’