Most of Britain has seen a grey, dull day today, but the country has been treated to mild temperatures across the board. London, the South East and South West, has seen balmy conditions of 55F (13C).

The North of England and parts of Scotland have reached 52F (11C). However, looking ahead, it’s more likely to be a windy Christmas than a white one, with forecasters warning of blustery conditions and rain for many parts. 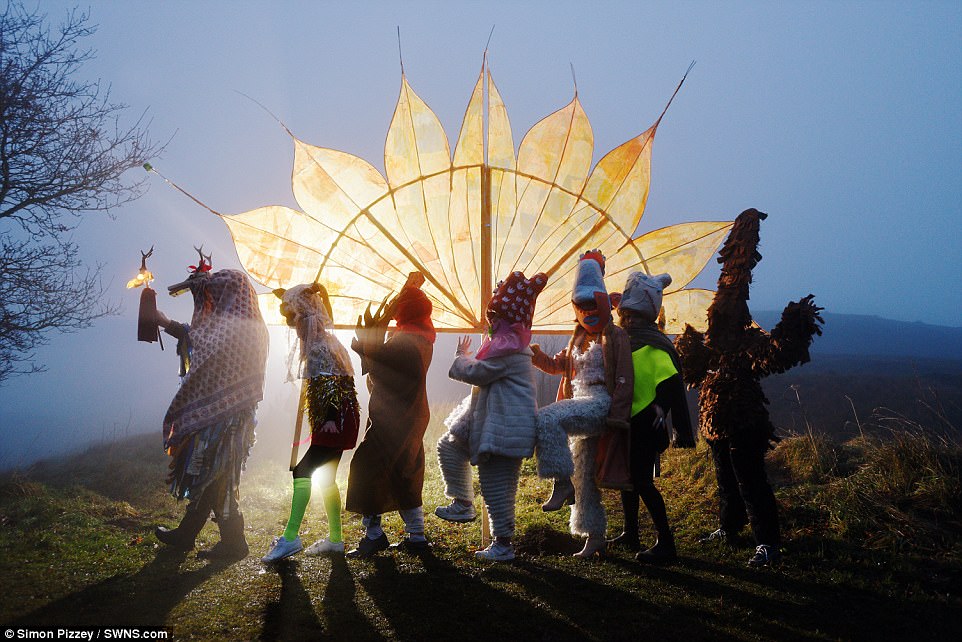 Winter Solstice is the shortest day of the year – an event is claimed to be more important in the pagan calendar than the Summer Solstice, because it marks the ‘re-birth’ of the sun for the new year 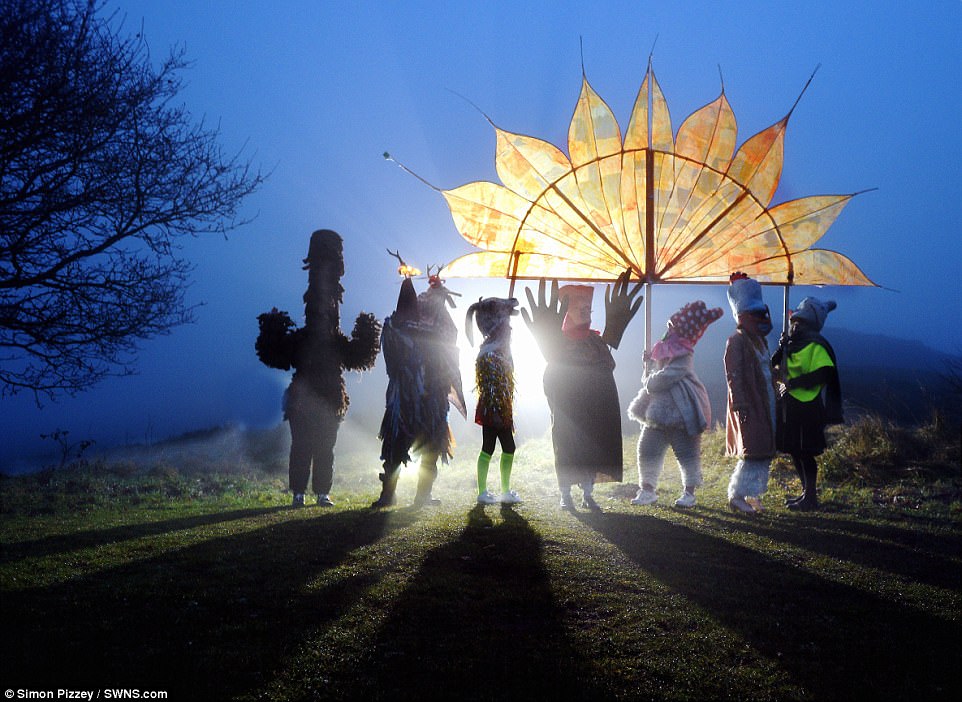 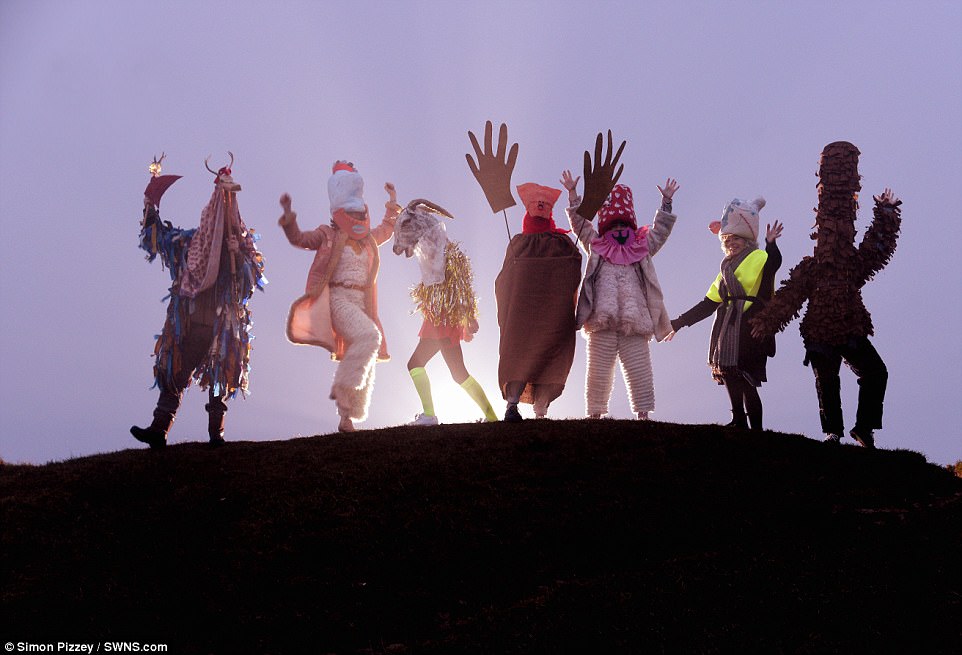 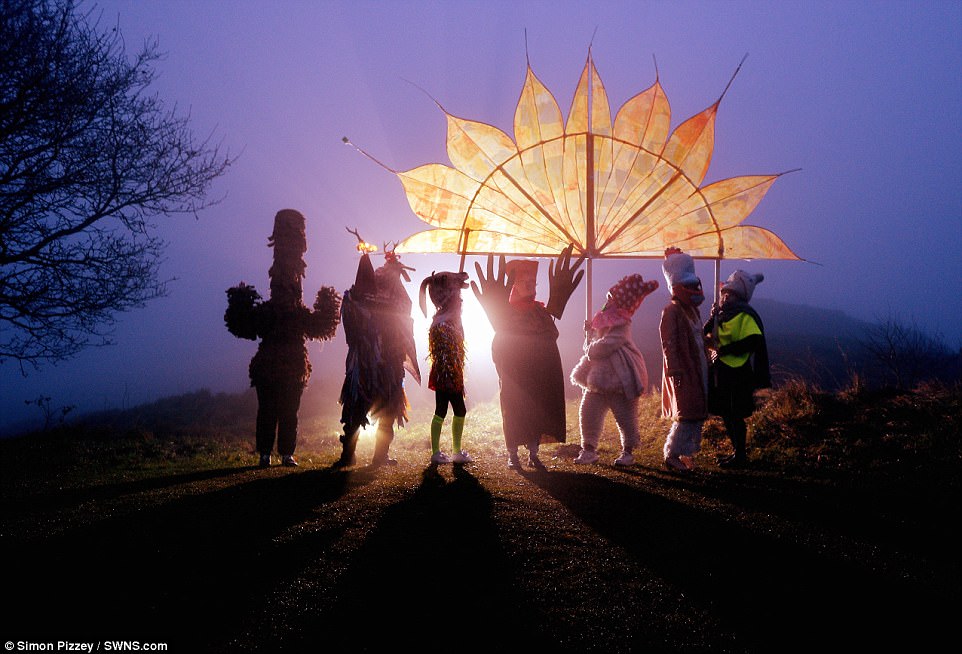 This morning artists from Stroud dressed in traditional costume to celebrate the Winter Solstice sunrise on Painswick Beacon in Gloucestershire.

Winter solstice is the shortest day of the year – an event is claimed to be more important in the pagan calendar than the summer solstice, because it marks the ‘re-birth’ of the sun for the new year.

The Met Office are predicting a balmy few days in the build up to Christmas. Forecaster Oli Claydon told MailOnline: ‘We are seeing a much milder week across the country – a stark contrast to last week.

‘Most of the South will see 12 or 13 degrees, while in Leeds, Newcastle and even parts of Scotland it will be around 10 or 11C. It’s going to start picking up as we get to the weekend, but it will remain pretty cloudy.’

People hoping to wake up to a White Christmas will be disappointed as the Met Office forecasts a warm front will bring mild conditions on December 25.

The majority of the country will enjoy fairly bland and grey weather over the festive period, with only occasional sunny spells.

But in the north-west and central Scotland, a yellow warning for rain has been issued by the Met Office on Christmas Eve and Christmas Day.

Heavy rain is likely over parts of western Scotland from Saturday through to Monday. Heavy rain may become more widespread on Monday compared to the weekend.

Spray and flooding could lead to difficult driving conditions and some road closures. Where flooding occurs, there is a chance of delays or cancellations to train and bus services.

There is a small chance that homes and businesses could be flooded, with power cuts and loss of other services.

There is also a small chance of fast flowing or deep floodwater causing danger to life and causing some communities to be cut off by flooded roads. 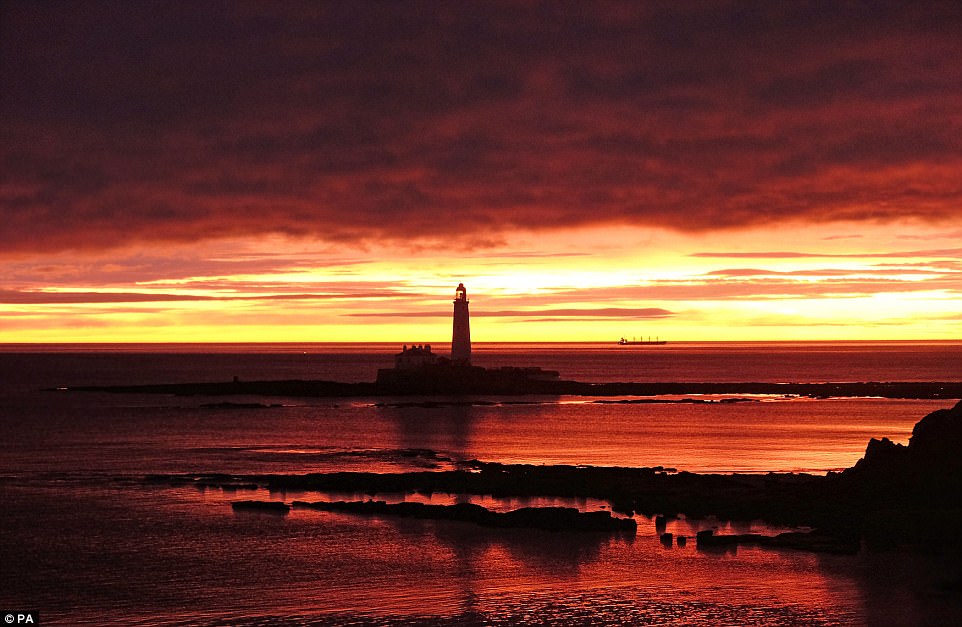 The sun rises behind St Mary’s Lighthouse this morning in Whitley Bay, Tyne and Wear

As forecasters predict warmer conditions, the odds of a White Christmas in the UK continue to drift.

Coral makes it 4-6 that thirteen major British cities will get snow and London is now on odds of 6-1 having been 4-1 just a few days ago.

‘Punters are still dreaming of a White Christmas and we will be paying out long into Boxing Day if it does snow on Christmas Day but the latest odds suggest the chances are getting slimmer,’ said Coral’s Harry Aitkenhead.

Aberdeen is rated as the most likely of the cities to get snow on the day, at 2-1 with the firm, and Edinburgh and Glasgow aren’t far behind at 5-2 as Scotland seems the UK’s best hope of a White Christmas.

Low-pressure conditions are likely to dominate from around Christmas Eve onwards which means spells of heavy rain and strong winds between Christmas and New Year.

Those living in the far north of Scotland may be the only ones to experience snow on Christmas Day.

Met Office meteorologist Helen Chivers said: ‘For the big day itself, parts of Scotland and Northern Ireland are likely to see some heavy and prolonged rain and there is still a possibility of a white Christmas for some northern areas of Scotland.

‘But, for most of us, it’s largely going to be dry and breezy Christmas Day.’

Friday is expected to be mostly dry, cloudy and mild, with brighter spells in the east and light rain in western Scotland and the far west of England and Wales.

England and Wales are forecast to be mild, cloudy and ‘increasingly breezy’ over the Christmas weekend.

Ms Chivers added: ‘The RAC have dubbed this Friday as ‘Frantic Friday’ because it’s anticipated to be really busy on the roads, but from a weather perspective bursts of rain and gusty winds on Boxing day may cause motorists more disruption on what is expected to be the busiest day of Christmas travel, with an expected 5.2 million car journeys planned.’

A Highways England spokesman said: ‘Drivers will typically slow down in snow, ice or fog but when it rains, many consider it to be normal so they don’t adapt their driving habits.

‘Despite this perception, rain is a serious threat, making it harder for tyres to grip the road and harder for drivers to see ahead – factors that significantly increase the chances of a collision.’

According to new research from the Met Office, 1.56 million drivers have suffered at least one accident in the last five years due to winter road conditions, with motorists forking out an average of £1,362 in damages per incident.