Pageant queen, 22, born with tumors all over her body is overcoming

A young woman who has battled severe sickness throughout her life has revealed how her unwaveringly resilient spirit has carried her through some unbelievably difficult times.

Brianna Worden, from upstate New York, was diagnosed with Neurofibromatosis (NF) Type One when she was just two months old; the condition means her entire left side from the neck down is covered in tumors – both inside and out.

The 22-year-old, who loves to sing, has undergone 10 surgical procedures in her life already, having to learn to walk again at eight years old and even learning to speak once more after a particularly difficult surgery recently.

Resilient: Despite having health problems since infancy, Brianna Worden, a 22-year-old beauty pageant winner, is using her platform to raise awareness about living with Neurofibromatosis 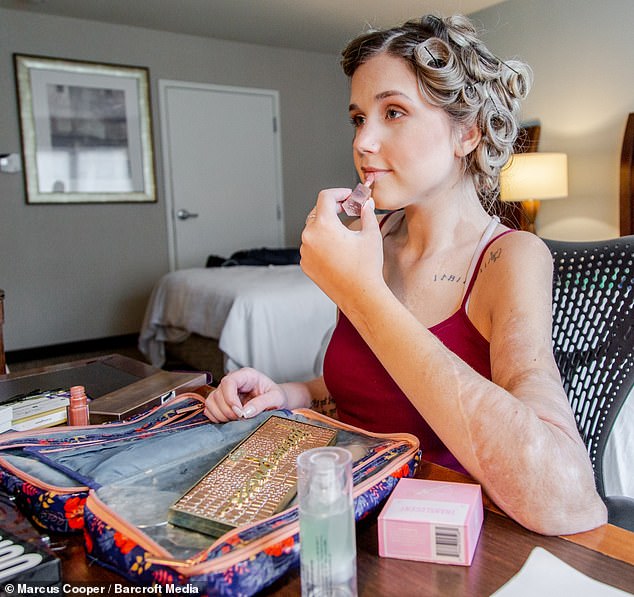 Rare: Neurofibromatosis (NF) is a rare genetic disorder that results in tumors inside and outside the body; in Brianna’s case the tumors are all down her left side 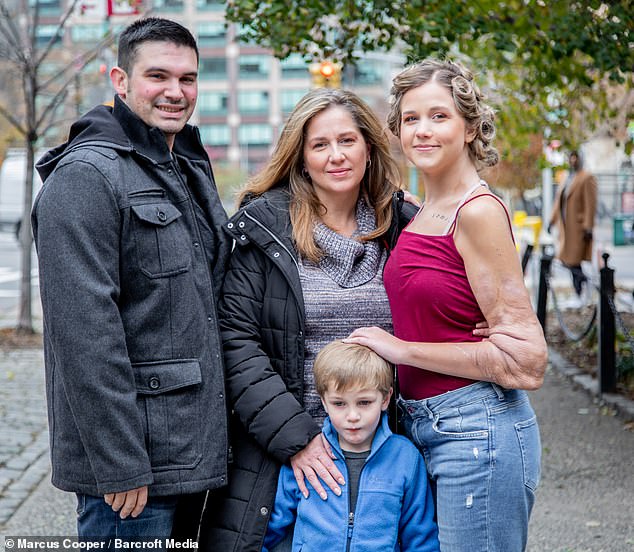 Brianna told Barcroft TV: ‘It’s just an everyday battle that I face. A lot of my childhood was spent in hospitals, kind of like in movies when you’re looking at the child looking out the window looking at everyone else having fun.’

Speaking about her tumors, she said: ‘When you look at it, it is scary. But I don’t care. I flash it; I’m like, “Hey would you like to know more about it?”‘

Brianna explained that she also had a titanium rod going down her spine.

Yet despite some truly harrowing experiences growing up, Brianna has remained consistently positive throughout, overcoming every setback, and even getting her Bachelor’s degree in Psychology.

Her mom, Janna Walter, said: ‘Brianna’s personality is like sunshine. She’s always positive. She has challenges for sure. However, she doesn’t let those challenges get in her way.

The family have been going to the same hospital in Boston for over 20 years. 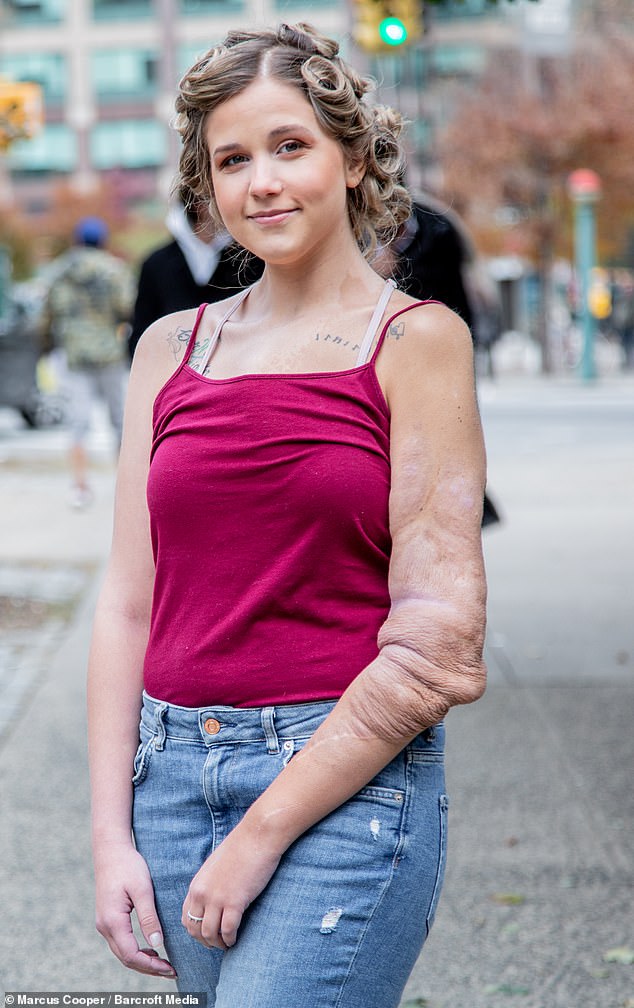 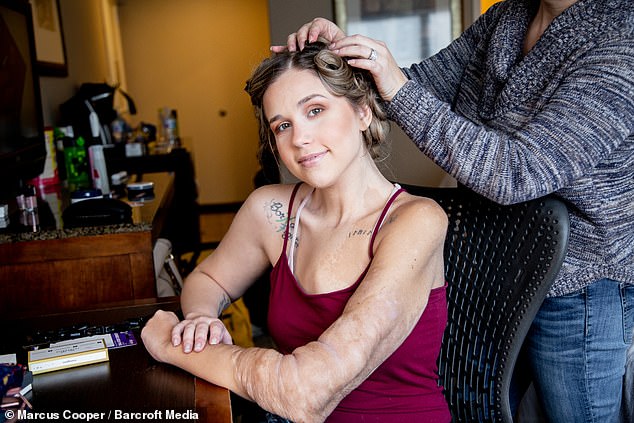 Awareness: The inspiring young woman said she wanted to use the pageant as a platform to talk about NF

Neurofibromatosis (NF) a genetic disorder that causes tumors to form on nerve tissue.

These tumors can develop anywhere in your nervous system, including your brain, spinal cord and nerves.

The tumors are usually noncancerous (benign), but sometimes can become cancerous (malignant).

Symptoms are often mild. However, complications of NF can include hearing loss, learning impairment, heart and blood vessel problems, loss of vision and severe pain.

‘I can’t even describe the feeling. It was so cliche, but I cried with the overwhelming feeling of joy,’ she recalled.

She added: ‘Although NF causes a lot of deformities, I wanted to break the stereotype of pageantry because with the pageants it’s not just going on stage and looking pretty, you have a platform.

‘So, I decided “Why not use NF?” because I noticed when you have a crown on your head or something sparkly, it’s kind of like having a megaphone.’

Using her time in the spotlight to speak openly about her condition allowed Brianna to educate others on NF, which has caused her an unprecedented amount of physical problems.

The condition is most visible on Brianna’s left arm, where she has had three ‘debulking’ operations to reduce the tumors’ mass.

Unfortunately, each time the doctors removed the three pounds of tumor necessary, it has grown back. Now, the skin on her arm has become incredibly thin, making further surgery impossible.

She is currently using a clinical trial drug alongside chemotherapy to try to shrink her tumors, but NF can cause more issues, including high blood pressure, blindness, deafness, hypertension, and a whole slew of other medical challenges. 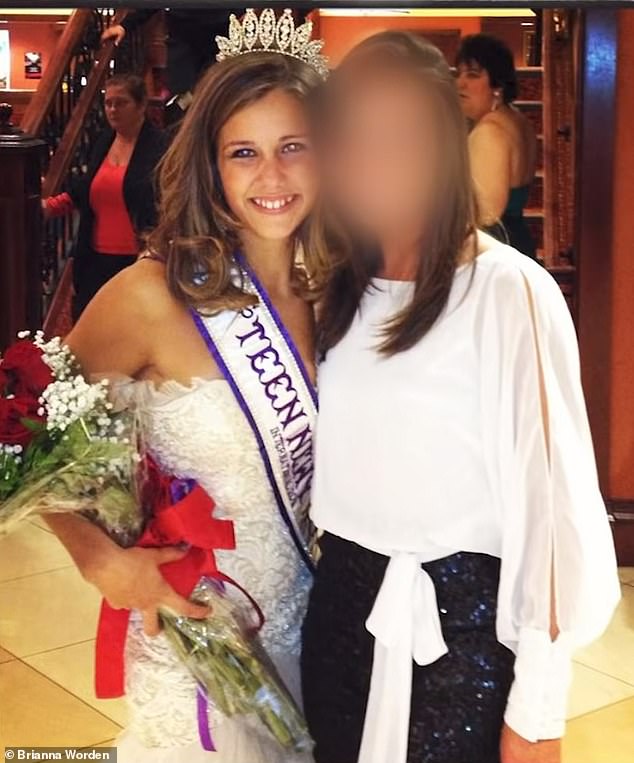 Winner: The young woman said she cried with joy when she won the pageant in 2013, pictured 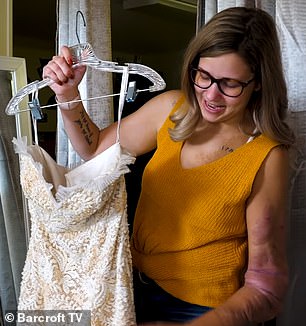 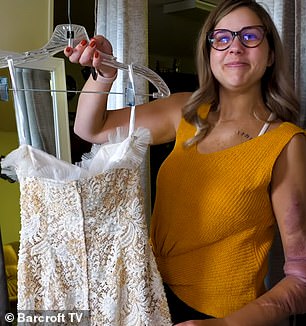 Dress: Brianna proudly shows off the dress she wore when she won Miss Teen New York in 2013 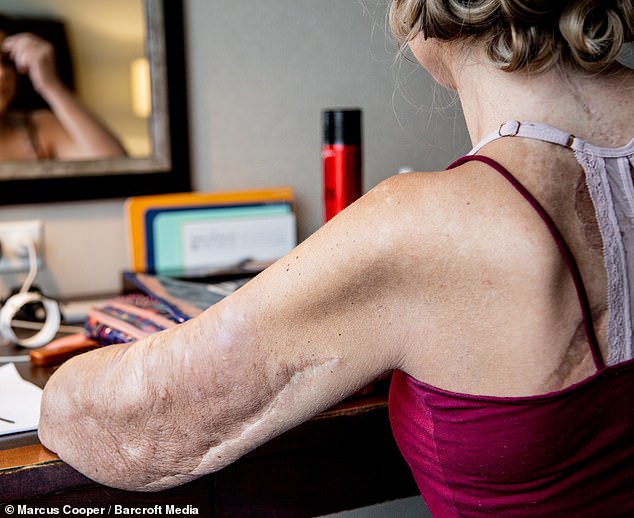 Lifelong: As Brianna was diagnosed with NF as a baby, she has had the tumors on the left side of her body her entire life

And as if that wasn’t enough, Brianna found out in high school that she also had cancer, during a particularly challenging cheer leading practice.

‘I lifted my left arm to do a jump and my shoulder completely dislocated,’ she explained. ‘My shoulder actually went right into my chest.’

After having a PET scan, a new tumor was identified in Brianna’s chest and the then high school student learned she was in the ten per cent of NF patients who also develop cancer.

‘There’s not really a treatment that you can do,’ she continued. ‘You can have radiation but with radiation it makes my Neurofibromatosis grow.

‘So I just said ‘you know what, we’re going to remove it and whatever happens is going to happen.’

Since then, Brianna has had an ongoing battle with cancer, with new tumors developing after the initial one was removed.

A particularly painful surgery to remove the new tumors involved the doctors having to go through Brianna’s throat.

‘When they removed it, I woke up and I couldn’t talk,’ said Brianna. ‘What happened was the stress of the surgery and the swelling and the intubation caused my left vocal cord to be paralyzed. 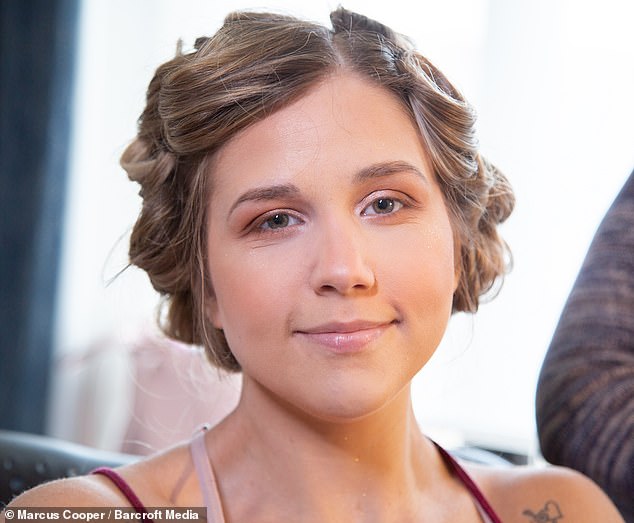 Cancer: Brianna’s mom explained that the New York native has had cancer three times so far 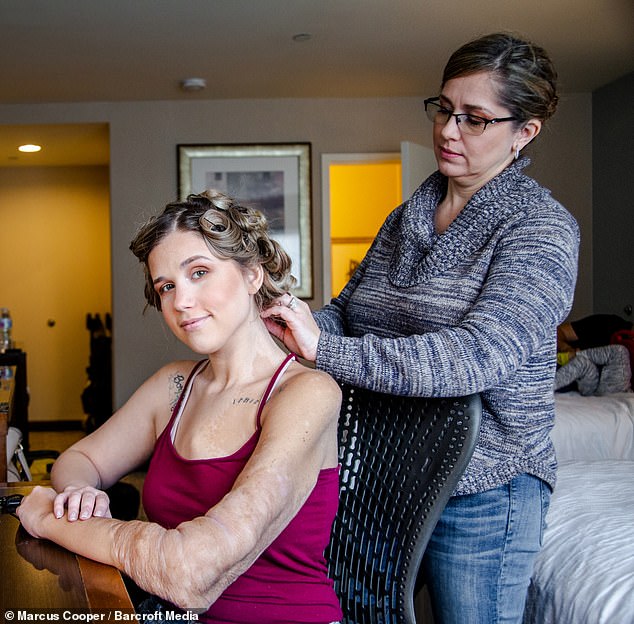 Strong: Brianna’s mom Jana, pictured getting her ready for her photo shoot, said her ‘positive’ daughter is ‘like sunshine’ 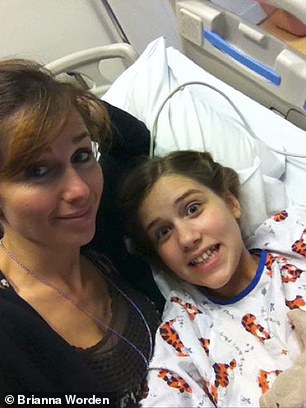 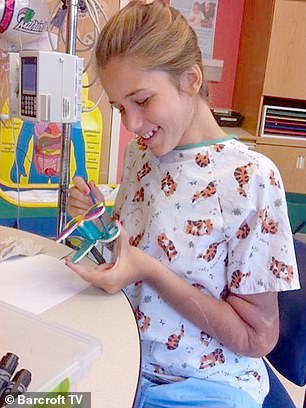 Fighter: Brianna pictured in her younger years in hospital with her mom Jana, left

‘They did an exam where they stick a camera down my nose and into my throat and they said, ‘You may never be able to talk or eat normally again, and you won’t be able to sing.

‘Singing is my passion so my heart just broke. Instantly I was depressed.’ 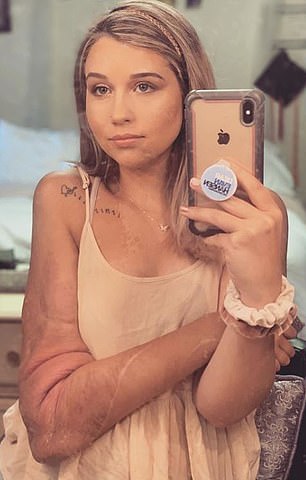 Instagram: Brianna uses her social media platform to also raise awareness about living with the rare genetic condition, as well as her cancer battles

Learning sign language was off the table due to her NF meaning she couldn’t use her left arm normally, so Brianna was left with writing things down to communicate.

Despite feeling like her ‘world was slowly caving in,’ Brianna shocked doctors in the following months by overcoming these seemingly insurmountable odds.

She said: ‘I had to do six months of speech therapy and they don’t know how, but I can now talk. I can eat solid foods and I can sing.’

Brianna described the moment her voice came back: ‘I was trying to yell over my dog to talk to my brother because no one could really hear me. I had a very squeaky voice.

‘There was a little “click” that we heard and then I just had my voice, simple as that. Doctors don’t really know how.’

On top of having to tackle these various medical issues, Brianna’s remarkable journey hasn’t been without negativity and judgement from others.

‘With NF there’s a lot of bullying involved,’ she said.

‘It’s funny, it’s not really from people my age or children, it’s actually a lot of adults. 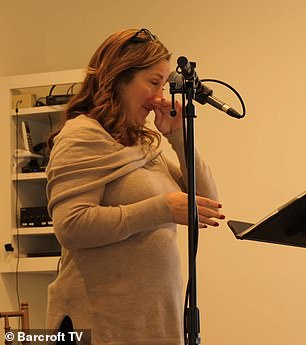 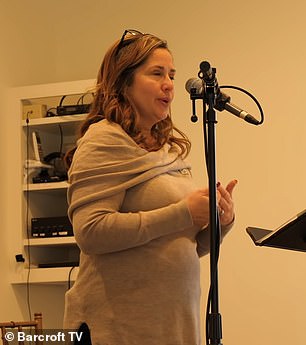 Fundraiser: Brianna’s mom Jana, pictured, emotionally tells the crowd at a fundraiser how her daughter has lived her whole life in pain 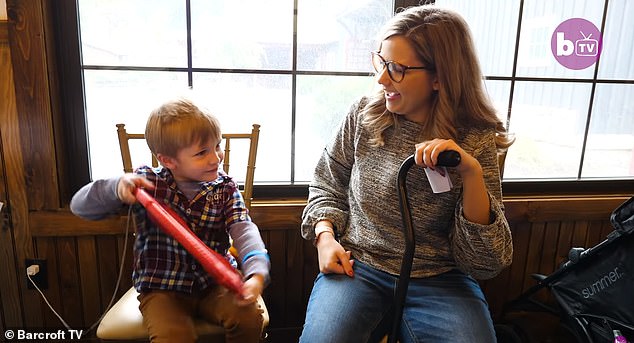 Brother: Brianna enjoys some quality time with her little brother Jayce after the fundraiser

‘If I hear them say something negative towards me it does hurt but what I try to do is always be like, “Hey, would you like to know more about it?’ Because I’m not contagious, it’s tumors.”‘ 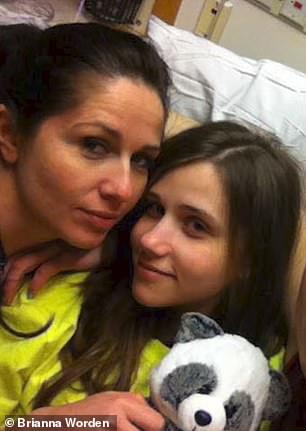 Voice: Despite doctors telling her she may never talk again, Brianna regained her voice after a particularly extreme surgery, she managed to learn how to talk and sing

This positive outlook extends to everything Brianna does, including her YouTube videos, where she sings and tries to educate others about her condition, as well as her advocacy work.

She and her mom are even writing a stage show that tells the story of their shared journey.

Janna said: ‘The amount of pride I have equals the amount of love and it’s never ending. Just when I think that Brianna has hit her plateau of what more can she do to shine, she does something else that blows me away.’

At a recent fundraiser for Brianna’s current treatment, the young advocate showed exactly the kind of resilient and positive spirit her mom is so proud of.

During a speech thanking the attendees, she said: ‘I promise you I will never give up my fight for NF. I will always continue to fight for my life but also fight for the lives of other NF patients to help find a cure.’