A blogger who has shed over 35 pounds has revealed apple cider vinegar is behind her incredible transformation.

Paige Mariah from Chicago took to her YouTube channel to ‘credit’ apple cider vinegar with helping her lose weight.

She decided to embark on her weight loss journey in November 2016 where she ‘finally allowed consistent exercise, a clean diet and mental toughness to combine and become a triple threat like no other.’

Transformation: Paige started her weight loss journey in November 2016 (left) and detailed that she drinks an apple cider vinegar twice a day (pictured right in April 2018)

Detox: The blogger believes it has helped with digestive issues and has cleared her stomach out (pictured left in May 2016 and right in October 2017)

Three is the magic number: Paige also shared on Instagram that she views diet, exercise and apple cider vinegar as her ‘triple threat’ (pictured left in July 2016 and right in October 2017)

Within a year she had lost 33 pounds and has sustained her weight loss throughout 2018.

‘When I was losing that weight there was actually one major thing that I was always doing and I feel like I have not talked about it enough. Drinking apple cider vinegar!’ she revealed.

‘So everyone has their own opinion about apple cider vinegar, some people just can’t stand the taste and they don’t deal with it. Other people swear by it. I happen to be one of the people that swears by it. I can honestly say that I see the difference when I’m consistently drinking apple cider vinegar,’ she added.

Paige then explained that she believes apple cider vinegar helped her in a couple of ways.

‘The first thing is, this has helped my digestive system tremendously,’ she detailed.

‘It’s a given that when you start eating a healthier diet your digestive system is just going to run a lot better overall but this just adds an extra kick. I don’t want to be too TMI, too gross but it really gets things flowing in there. I just feel like it clears my stomach out, like a natural detox.’ 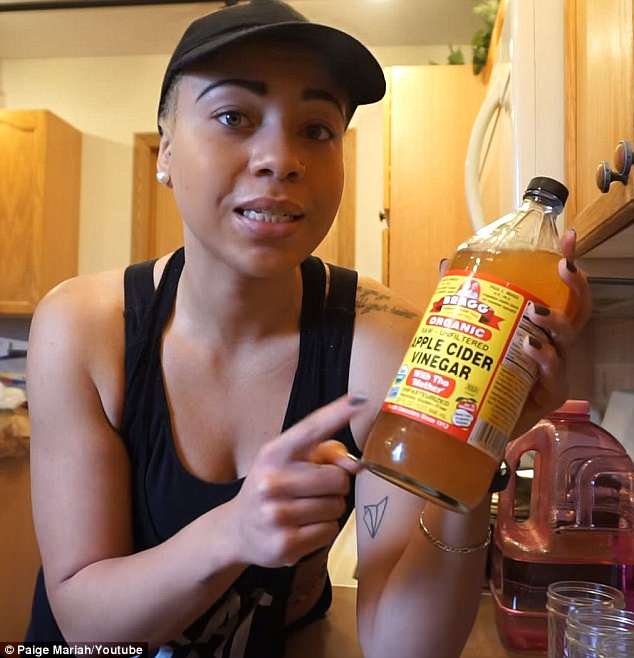 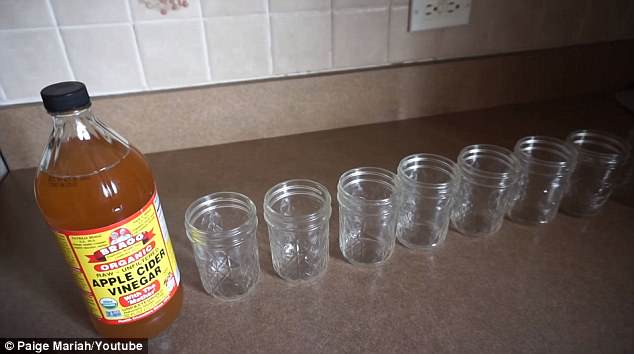 Prep: She also revealed that she likes to prep her apple cider vinegar drinks ahead of time and usually does it when she’s doing her other meal prep 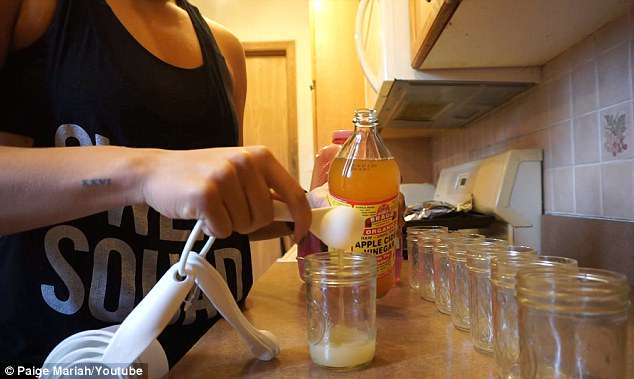 Mixture: Paige adds one tablespoon of lemon juice and a tablespoon of apple cider vinegar to a half cup of water and keeps the mixture airtight in a mason jar

She also explained that she’s found apple cider vinegar helps her control her appetite: ‘It helps control my appetite which is why I drink it once in the morning and once at night. Before I eat anything, I just feel like it paces me throughout the day, I don’t feel super starving and I don’t feel crazy, especially when I’m in a [calorie] deficit because I’m trying to lose weight.’

‘And then I drink it before I go to bed because at night, when you’re in a weight loss phase, at night is the time when you’re most hungry and you want to eat an extra snack before bed. But after drinking apple cider vinegar, it really just controls my hunger and I can go to sleep in peace,’ she added.

Paige also shared how she makes her apple cider vinegar drinks in advance, on the same day she does her meal prep.

‘I make the drinks in bulk so they’ll be ready to go when I’m ready to drink them,’ she explained.

She starts off my measuring out one tablespoon of lemon juice followed by a tablespoon of apple cider vinegar and then adds a half cup of water. She uses mason jars so she can transport them if she needs.

However, she did have this warning: ‘Apple cider vinegar is not to be confused with a magic potion. If you’re not doing the work, it’s not going to save you.

‘There’s no magic fix, just use this as an additional tool. You still need a clean diet, you still need to exercise and this could help you reap the benefits a little bit quicker.’