A pair of ‘beautiful’ bottlenose dolphins have been spotted in a shallow body of water between the mainland and the island of Anglesey on the cost of north Wales.

The dolphins were seen leaping through the water in the strait near Menai Bridge yesterday morning as passengers on a RibRide Adventure Tour filmed them.

A video shows the dolphins diving through the water as the entertain the crowd of tourists.

Leaping out of the water they perform tricks and twists in front of the cheering spectators.

A post published on the Ribride Facebook page, said: ‘The Bottlenose Dolphin are back in Menai Bridge, also a large pod of Commons have been sighted at Llanddwyn Island. Beautiful.’

Bottlenose dolphins are recognised for being stockier and by their pale underside while common dolphins have a distinct horizontal hourglass pattern on their side. 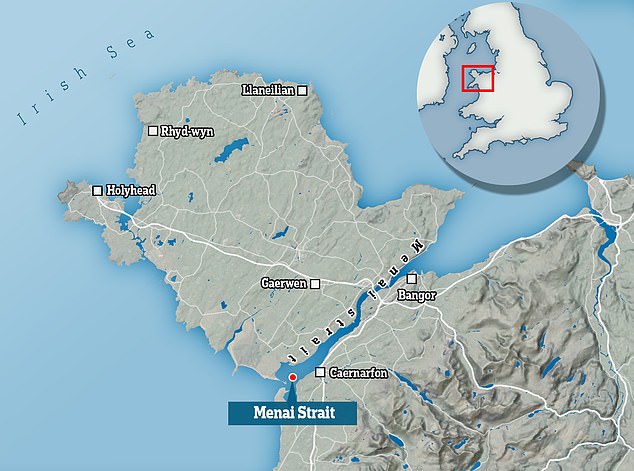 Frankie Hobro, marine expert and owner of Anglesey Sea Zoo, told North Wales Live earlier this month: ‘We have a residential pod of bottlenose dolphins in Cardigan Bay that are there for most of the year, so these could be a breakout from that pod.’

Dolphins are common around the North Wales coast, but don’t usually stray in to the strait due to its shallow and tidal waters.

But the dolphins tend to follow a food source, which includes mackerel, which may explain their presence in the strait, Ms Hobro said.